“Check in is on the 35th floor,” a clerk informs all guests stepping into the Shangri-La hotel entrance at the Shard—Western Europe’s tallest building and the one-time private residence of a London fox. Back in 2011, when the building’s concrete core was being wrapped with sturdy steel and reinforced with hydraulic jacks, a curious fox was discovered on the 72nd floor. (The streets of London are teeming with wild foxes.) The young creature had entered a central stairwell, climbed to the top of the half-formed structure, and was living off workers’ scraps.

“The staff nicknamed him Romeo,” explains communications manager Ruta Bikniute. “He lived up there for two whole weeks before disappearing.” Today, the Shard can be viewed as a vertical snapshot of a city, minus the foxes (except for a plush animal toy for sale in the rooms). Wrapped up in the tower are restaurants, residences, viewing galleries, 600,000 square feet of office space, and of course, the Shangri-La hotel, which adheres to all the five-star amenities to be expected from Asia Pacific’s leading luxury hotel group. Those with vertigo, however, beware.

At the end of the day—and at sunrise, of course—it’s really all about that view.

Designed by Renzo Piano, the Shard rises 309.6 metres above London Bridge station on the south side of the Thames, not far from the Globe Theatre. Piano’s famed buildings include Centre Georges Pompidou in Paris and the Whitney Museum in New York, but this is his tallest endeavour to date. Some very specific structural elements also had to be considered, of course, not least of which is that the tower was designed to bend up to 50 centimetres in every direction during high winds. To an engineer’s mind, this flexibility offers unwavering stability, but for those of us without construction knowledge it can be jarring to feel that ever-so-slight sway on a stormy London evening. “That’s totally normal,” assures Bikniute during a stroll around the suites. “It’s basically designed to do that so it won’t snap in half.”

At the end of the day—and at sunrise, of course—it’s really all about that view. Every guest is led from reception to their room by a host who opens the door to darkness then dramatically presses a button for the shades to zip up and reveal the city below. A spectacular game of I spy can be played at any hour of the day or night (binoculars are provided) with icons of the city’s architecture such as St. Paul’s Cathedral, the Gherkin, and the London Eye. Excellent fine dining can be had at the Shangri-La’s Tîng restaurant and lounge. And a vibrant bar called Gŏng on the 52nd floor pulses with the energy of the city and serves ornately themed cocktails.

Once there, make sure to stay up past 9 p.m. when Western Europe’s highest pool closes to swimmers and becomes an extension of the bar. There’s no better place to feel like a royal in London, with the twinkling lights of the kingdom laid out like a miniature world at one’s feet. 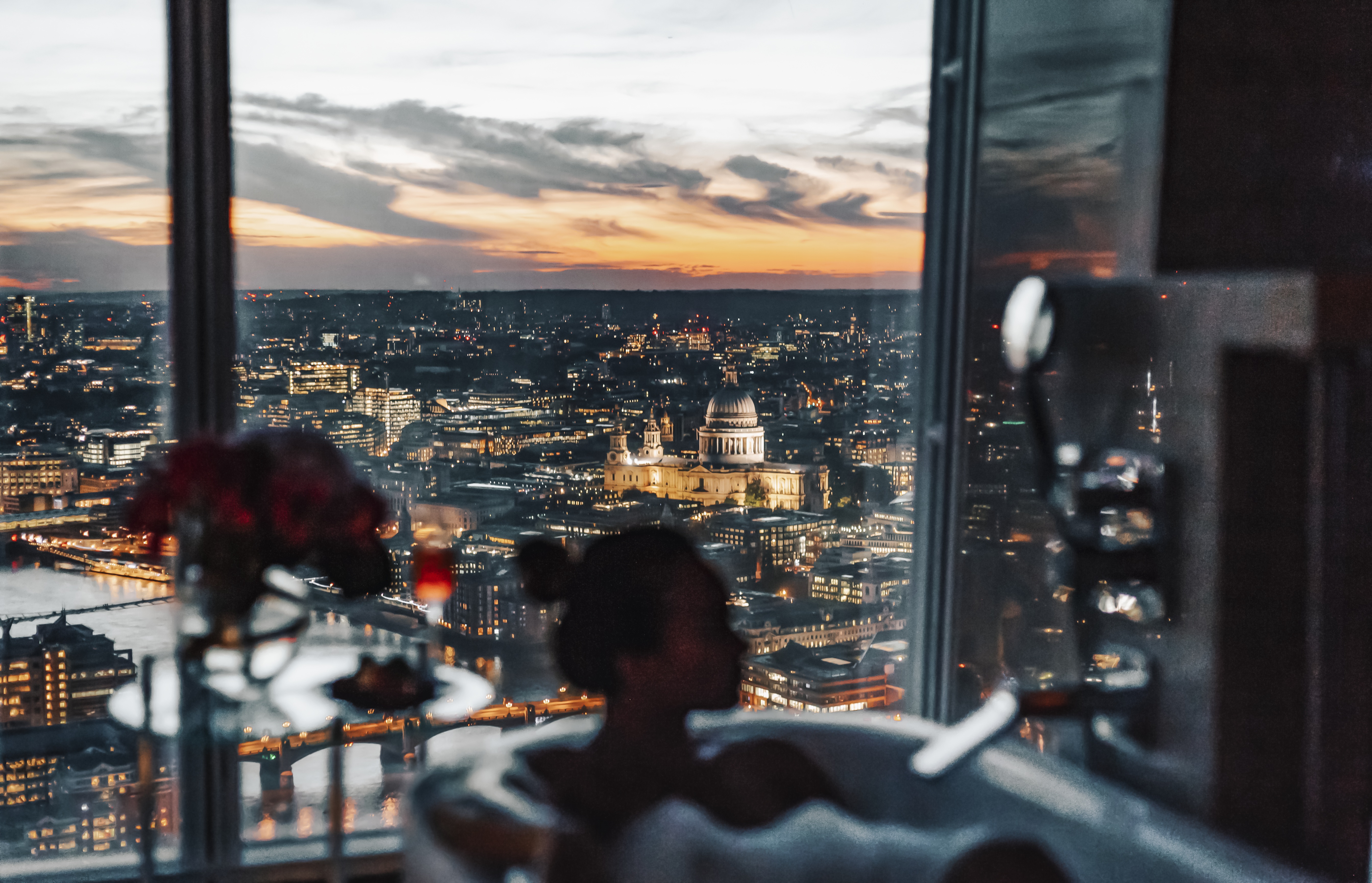 A bath with a view.

5 Cozy Farm Stays in Canada to Visit This Autumn