When one thinks of the Fairmont experience in the Canadian Rockies, what usually comes to mind are the stunning château-style railway hotels in southern Alberta. Jasper Park Lodge is a bit different. Built in the early 20th century as tent lodgings for workers on the Grand Trunk Pacific Railway, followed by log cabins and other wooden structures for visitors in the 1920s, the facilities were expanded and renovated in the 1960s and ’70s by then-owner the Canadian National Railway. Later acquired by the Canadian Pacific Railway, since 1988 it has been a year-round destination retreat, boasting one of the most scenic and most popular golf courses in the Rockies. Over the years, the lodge has hosted notables from Frank Sinatra to Queen Elizabeth. 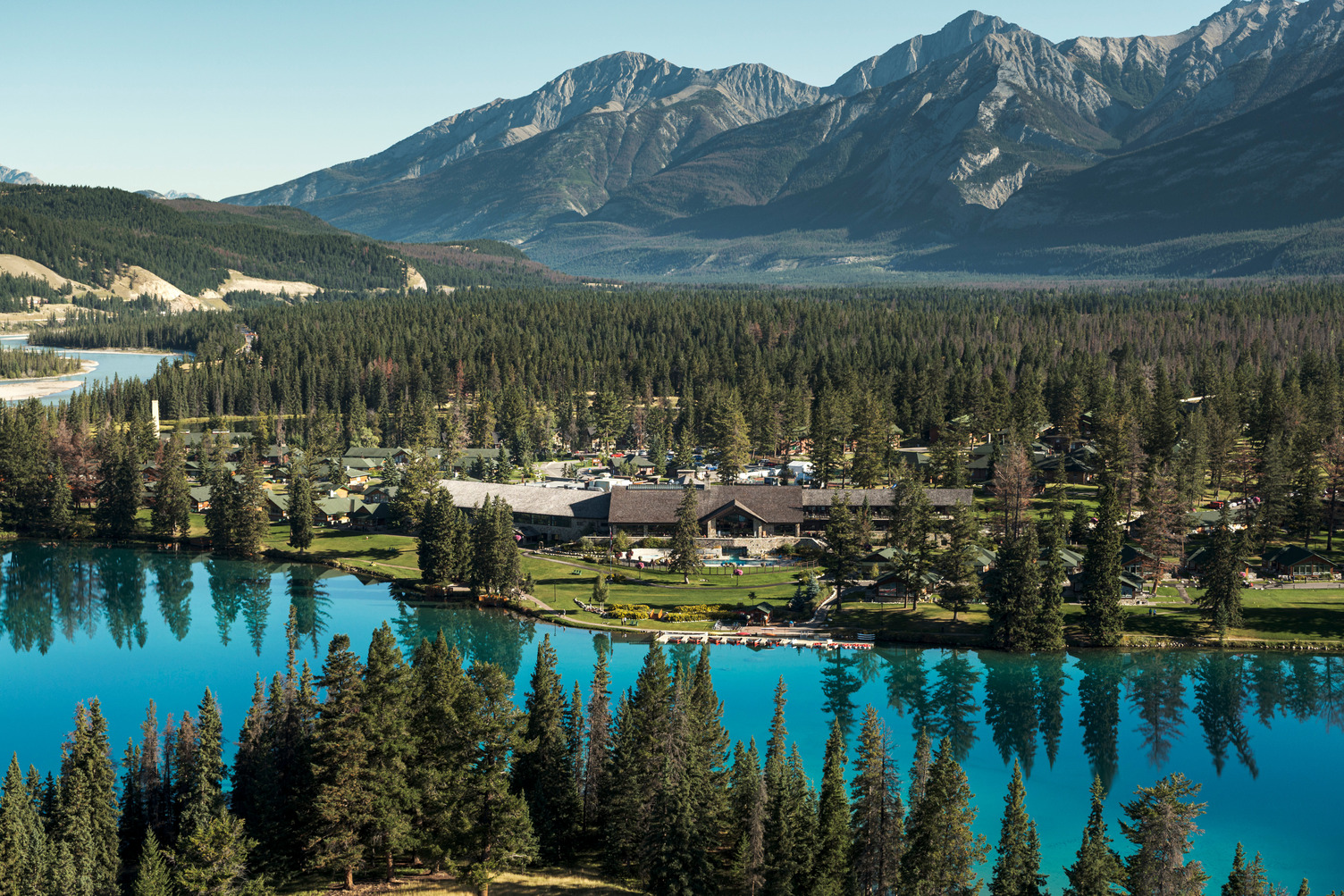 When I arrive, the hot winds of summer are blowing down the mountains, melting the ice caps and filling the Athabasca River as it runs through the small mountain town of Jasper, filling the lakes and marshes with glacial water that reflects the massive peaks in its deep blue water.

While it’s possible to fly into Jasper, the drive is incredibly rewarding, whether you approach from the Icefields Parkway to the southwest toward Banff or on Highway 16, which comes from from Edmonton to the north or British Columbia to the south. You will need to buy a park pass since this Fairmont is right in the middle of Jasper National Park. 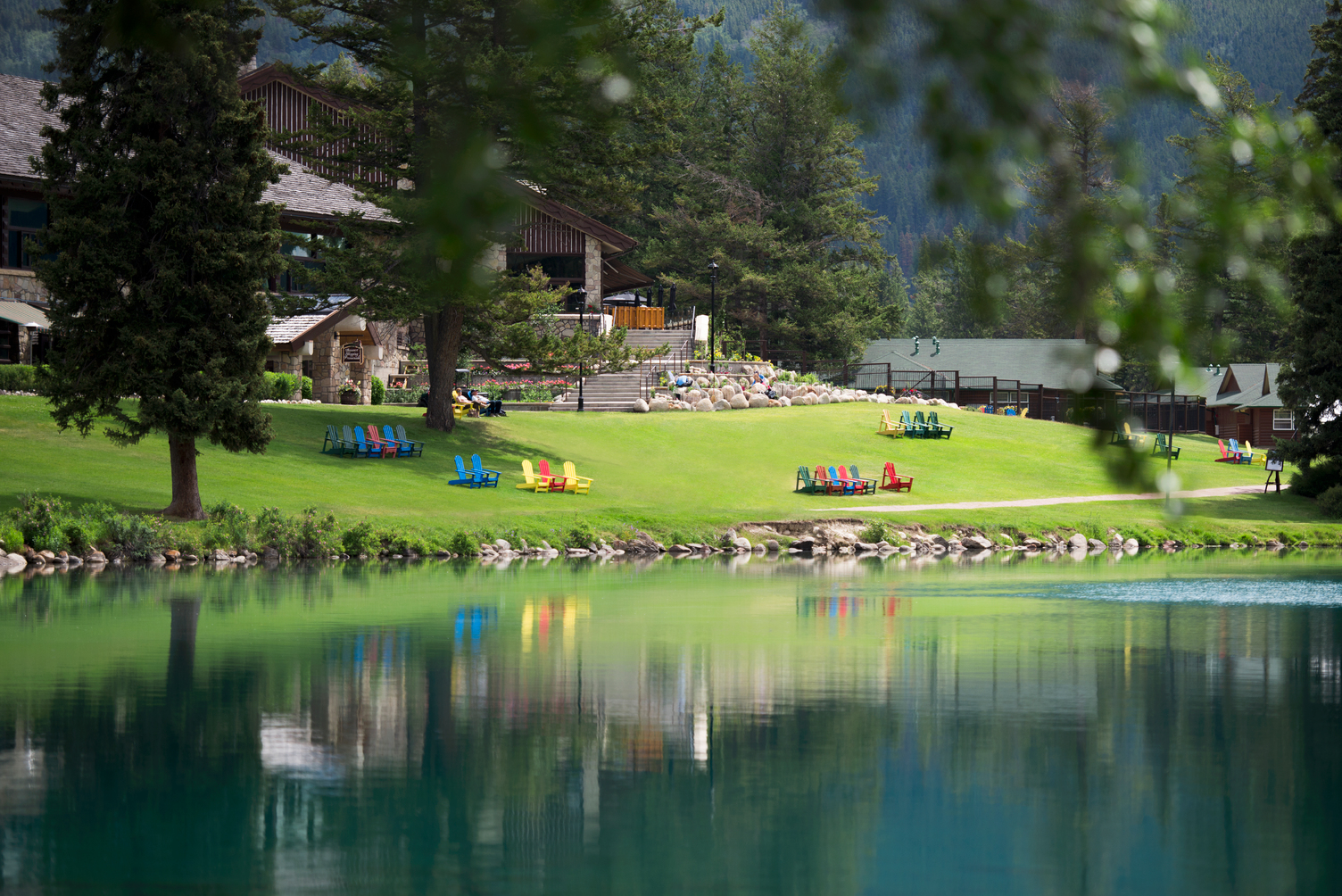 The drive to the lodge passes the beautiful lakes Edith and Annette, which are worth checking out—not to mention the countless other lakes and trails that dot the area, which the hotel staff is more than willing to help enumerate. A long winding road doubles back along the river from the highway, and the lodge itself is tucked up against Beauvert Lake, which guests have access to for water activities from swimming from the well-kept wooden launches or renting paddle boards and kayaks from the Boat House. On their grassland acres at the entrance to the property, a herd of horses range elegantly, available for trail rides.

A network of roads connects the different areas of the grounds. The decentralized approach of the property features more than 400 accommodations, from duplex-style guest rooms to lakeside cabin suites with fireplaces—and then the epic signature cabins, which are as big as 7,075 square feet, in case you want to bring the whole family.

I settle in to one of the junior lake suites, which are situated around the lakefront. Wood-clad, this suite has a front room for sitting and lounging, and a bedroom area that can be shielded from the sitting room and window by a sliding door. 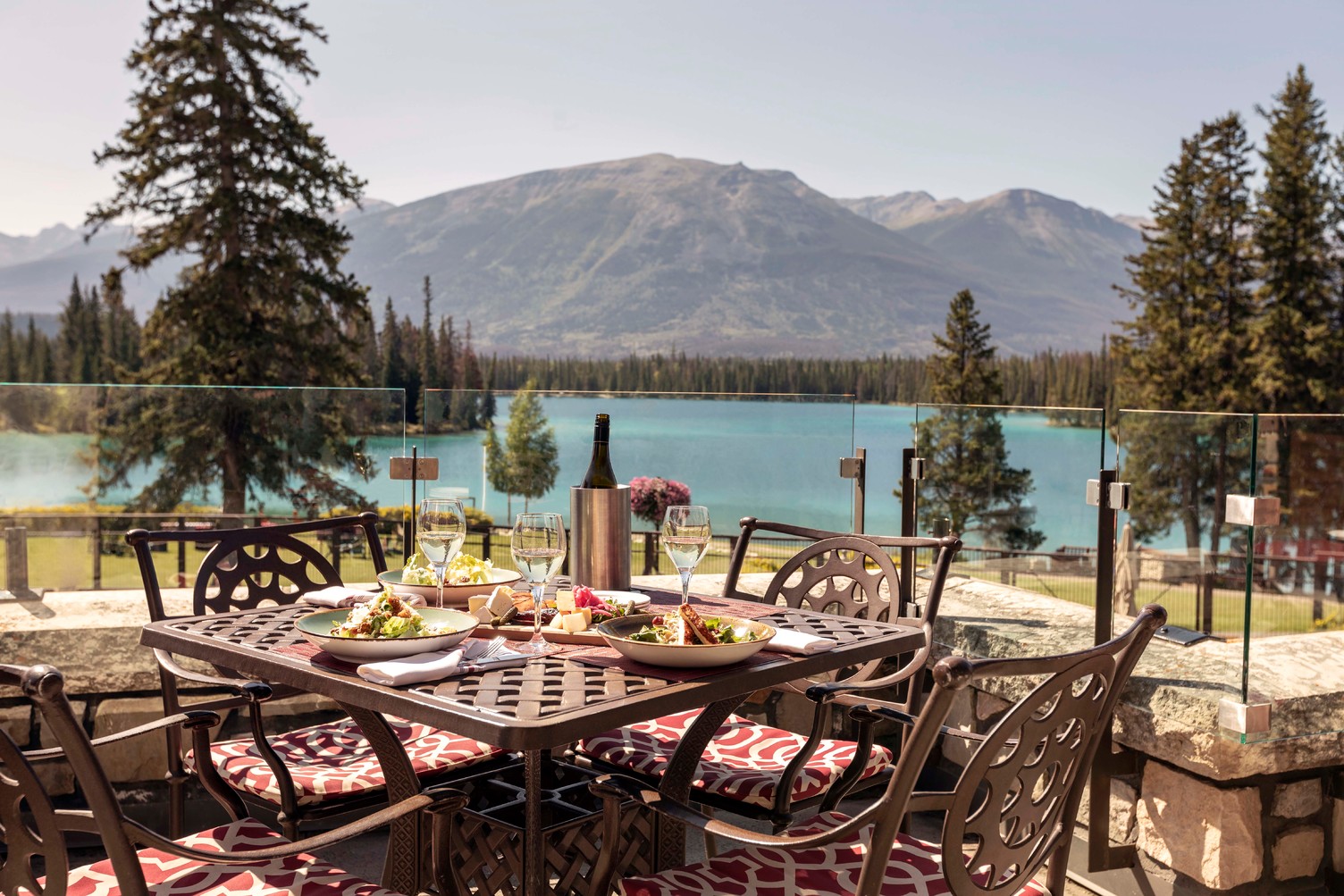 The patio at the Emerald restaurant. 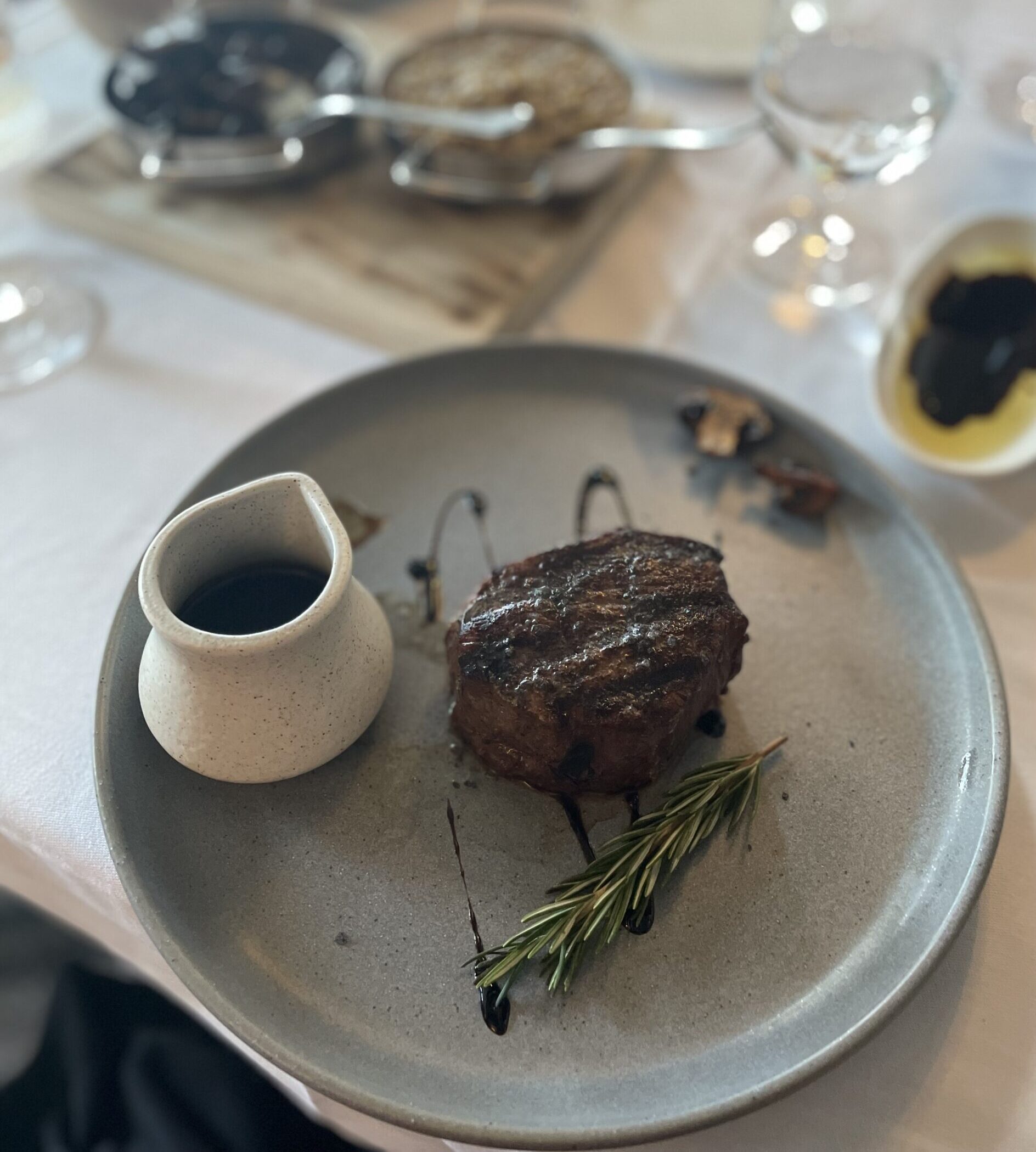 A bison tenderloin at Orso.

A short walk from the suite—or an even shorter drive in one of the complimentary shuttles—is the main lodge with indoor and outdoor pools, hot tubs, a spa, and multiple bars and restaurants. A standout among them is Orso Trattoria & Terrace. Southern Italian fare with an influx of inspiration and ingredients from the Rockies, the menu features a bison tenderloin served with a mouthwatering Chianti jus and delicious pastas like a boar bacon carbonara.

While things are opening back up, Jasper Park Lodge is also nice and spacious; all the accommodations open directly to the outdoors, and there are plenty of patio dining choices, as well as meal service directly to the cabins. 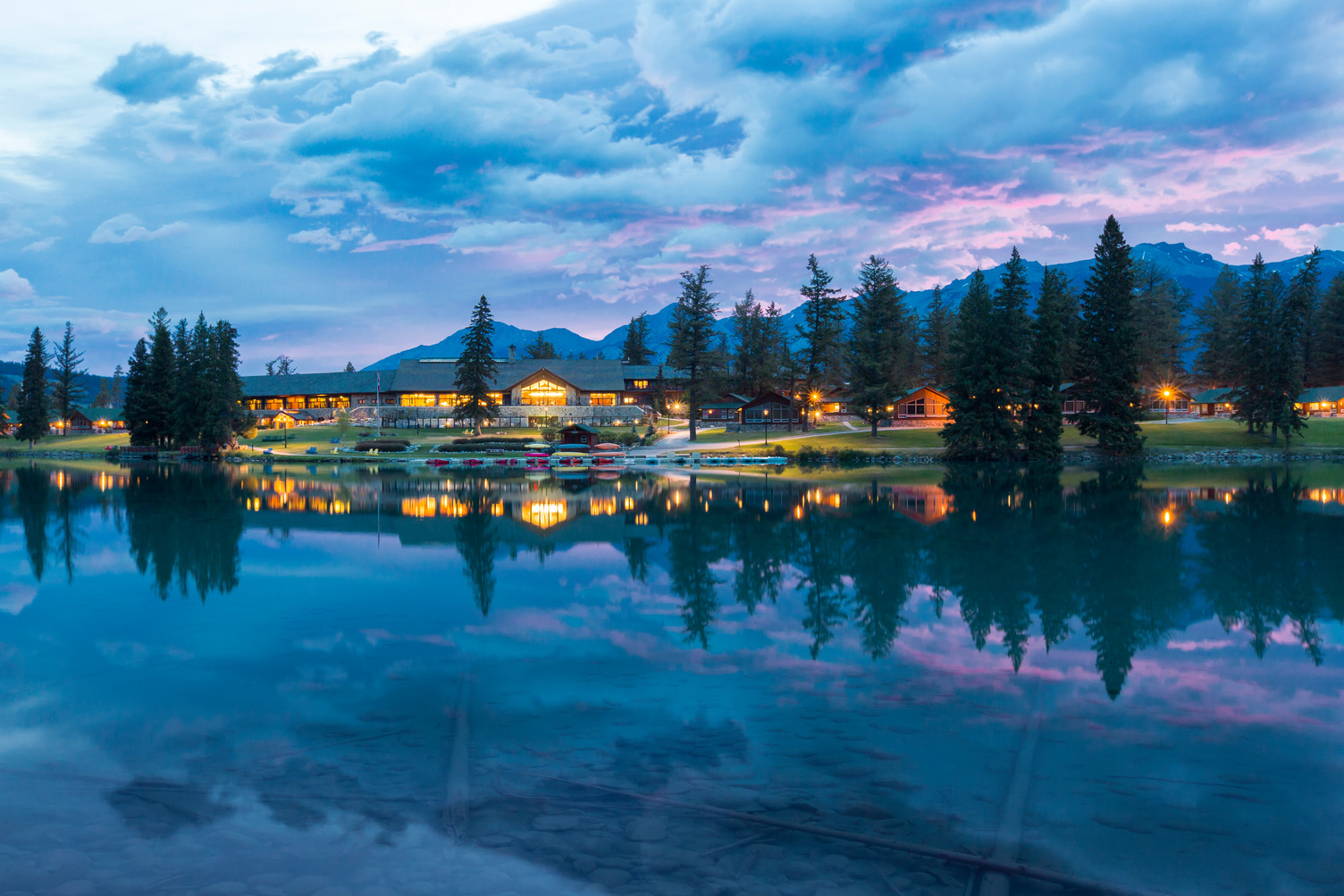 I finish off my stay full and lounging on one of the many chairs on the grassy slope that leads down from the cabins to the waterfront. We watch a storm roll in, and soon lightning is crashing in the distance, reminding us of the strength of the weather and of the wilderness that remains here. A truly enjoyable stay.