In the arid Middle Eastern air, the city of Doha rises like a concrete mirage in the desert. Qatar’s capital—the country is itself a peninsula, jutting out into the Arabian Gulf and bordering Saudi Arabia to the west, the United Arab Emirates to the south—is a small place with a big desire for large-scale built environments. Somewhere in between the (fore) shadow of the upcoming 2022 FIFA World Cup, the recent opening of its new $17-billion (U.S.) airport, and the reality of what money can and can’t buy, Qatar is still negotiating its place as a travellers’ destination worth visiting. 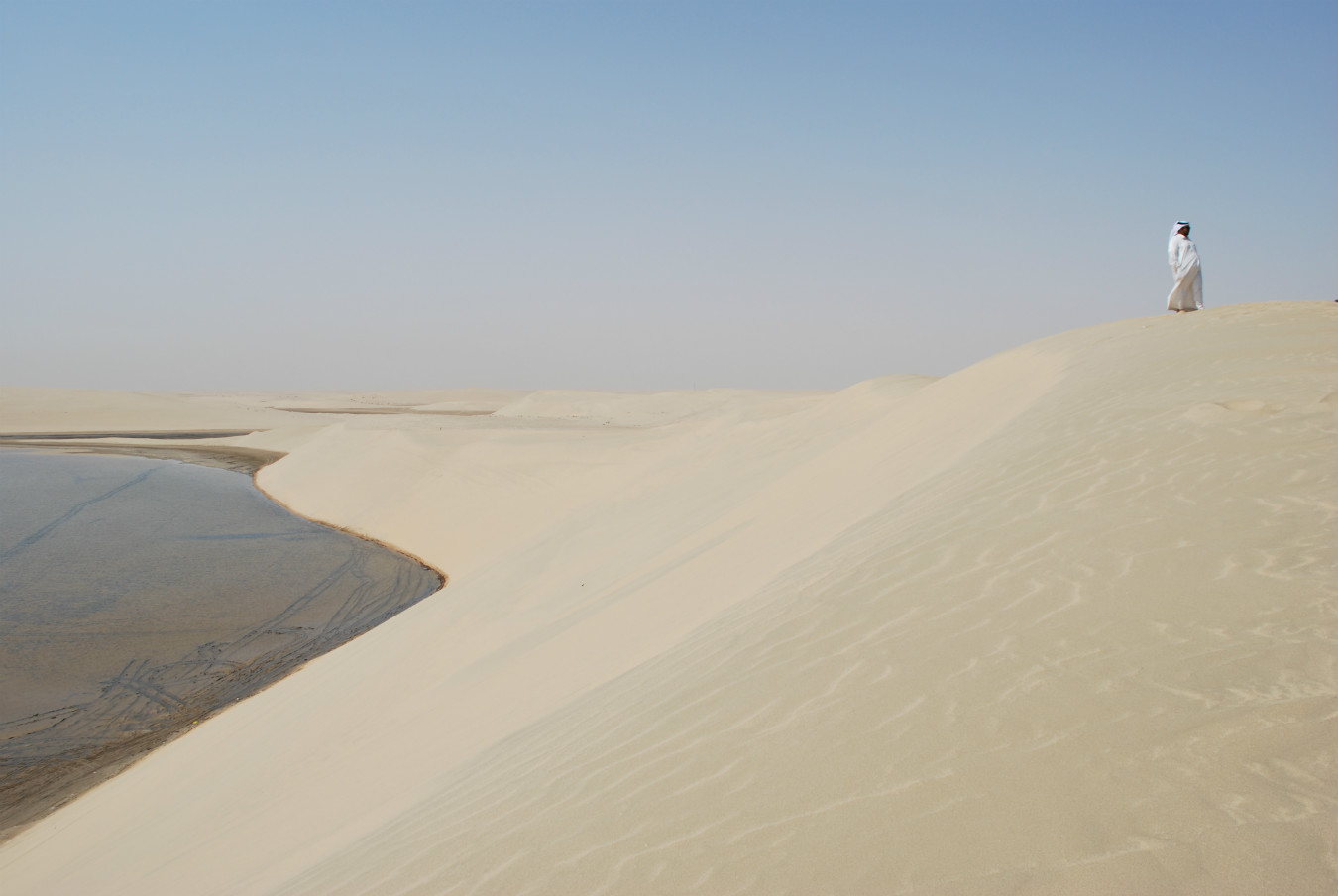 Even though it is just 11,500 square kilometres in size, Qatar’s natural resources have made it the richest country (per GDP) on the planet. Doha itself is a cultural melting pot of Persians, Bedouins, Indians, Filipinos, Pakistanis, East Africans, Americans, and more; a hotbed of beige terrain and shiny buildings. It is home to international news broadcaster Al Jazeera’s headquarters and frequently hosts big-business summits, as well as myriad high-profile sporting events like tennis opens and polo championships. Still, “little Dubai” has had its challenges, not least of which because Doha is so often overshadowed by the size and extravagance of Dubai itself, just a one-hour flight away. 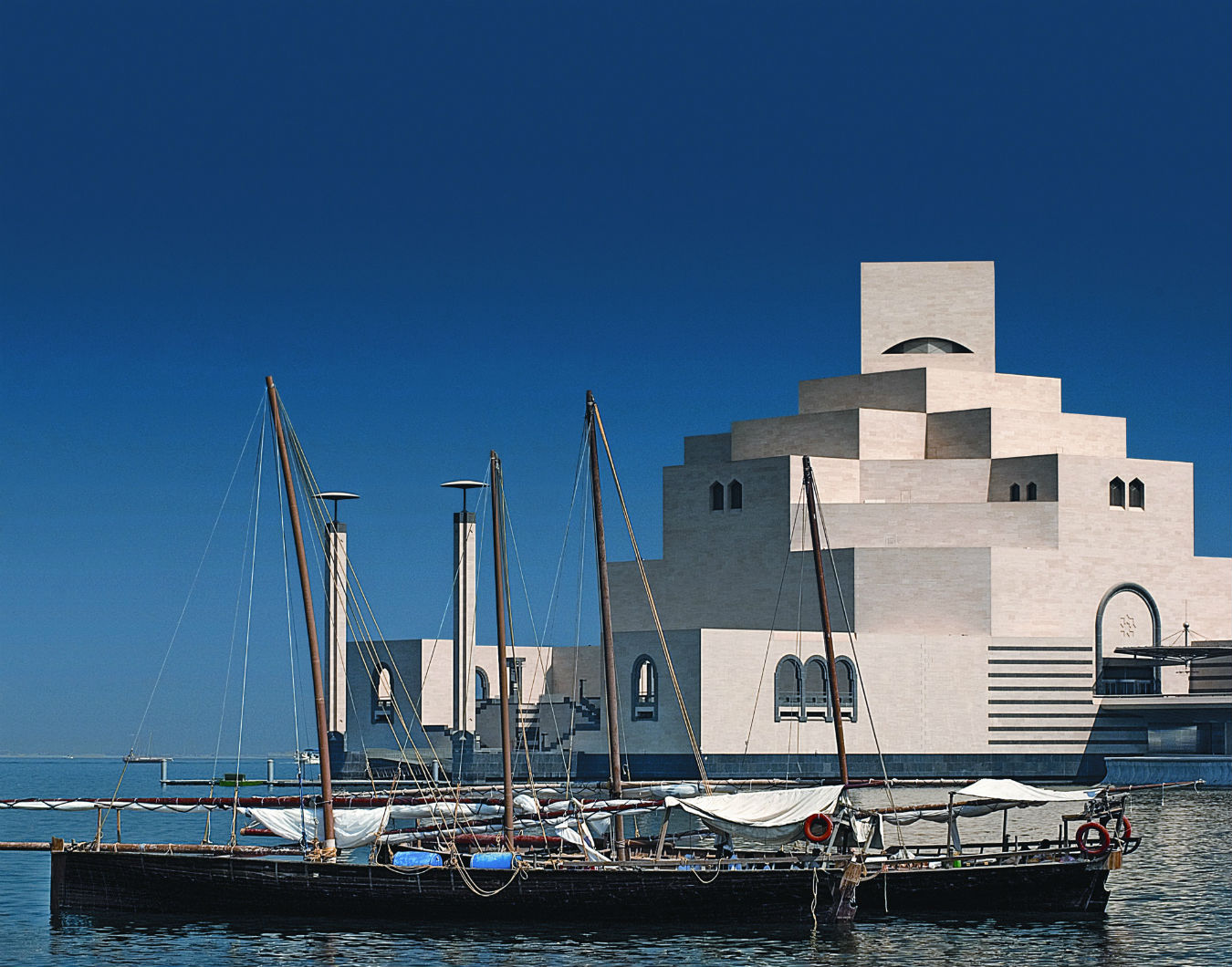 The Museum of Islamic Art, designed by I. M. Pei, houses artifacts that date from the 7th to the 19th centuries.

The wealth in Doha is viscerally evident at many turns, and can be seen turning off highways in the form of cool white Rolls-Royces (an automobile favourite of the royal family) driving the meticulously clean, hot streets, which are roamed by very few pedestrians. City planners have been parting the ocean to pave the material way for expats and citizens to buy permanent footholds and vacation homes in the capital, rapidly building oceanfront property where there was none before. One such structural monolith is the Pearl, Doha’s multi-billion dollar island of almost 16,000 dwellings, as well as marinas, a yacht club, schools, and restaurants—a city within a city. Another major residential development, Lusail City, is expecting 200,000 residents to move in by the end of this year, and both “cities” are constructed upon man-made islands of reclaimed land and ocean reefs.

In the Heat of the Day

There seems to be a constant desire in the streets of Doha to make what’s old new again. Ruins and relics are virtually relegated to the displays at the Museum of Islamic Art (also built on another artificial plot of reclaimed land). Designed by Pritzker Architecture Prize–winning architect I. M. Pei, the impressive five-storey building is a work of architectural art, set behind small windows that are meant to mirror the slits in a woman’s veil, eyes gazing out across the bay. The museum’s enviable collection includes emerald pendants and bone daggers from 17th-century India; Turkish carved wood doors and Egyptian manuscripts; gold-silk robes from Central Asia; along with various artifacts from the 7th to the 19th centuries. 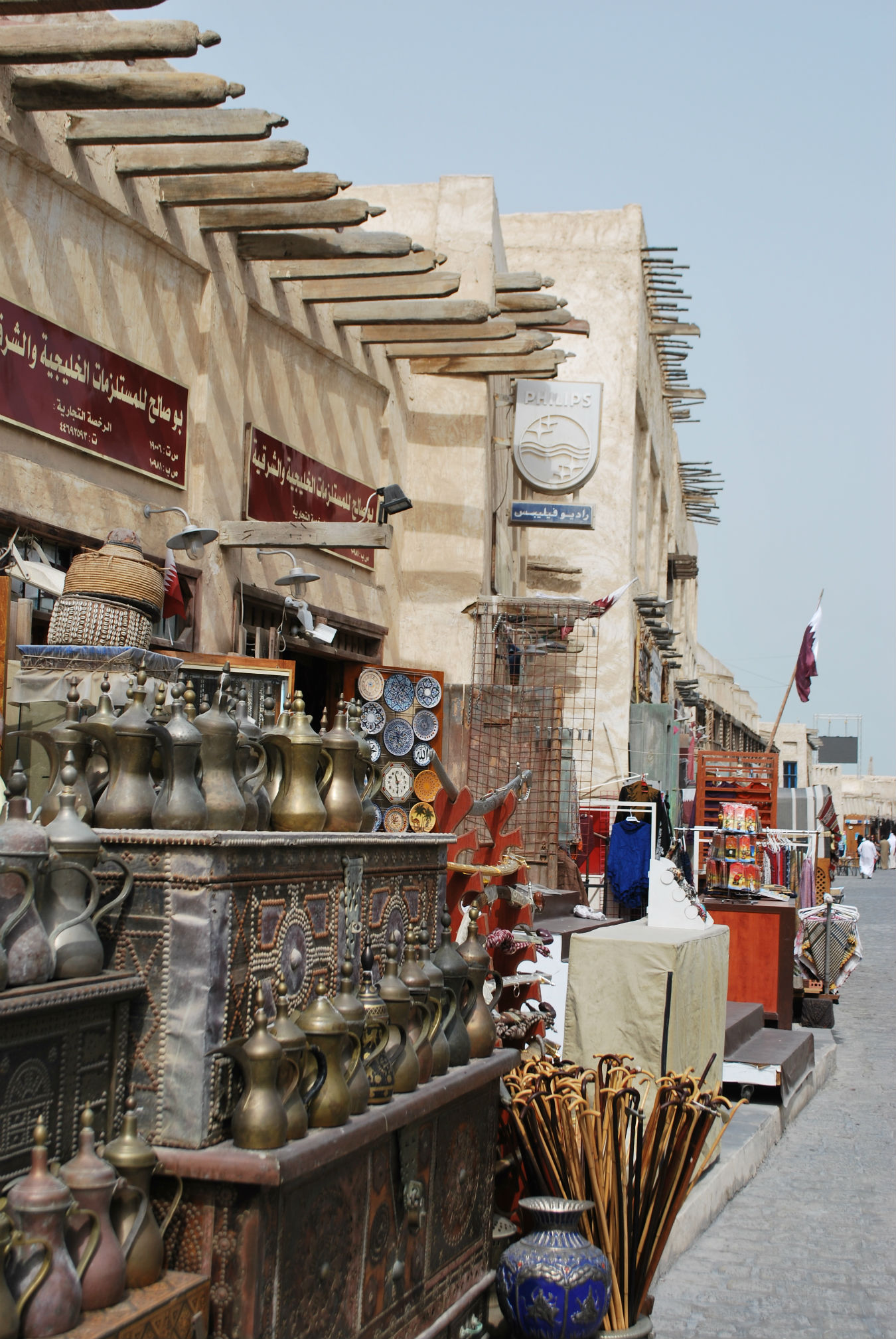 Another must-wander locale is the Souq Waqif marketplace for all the fragrant spices, nuts, and rosewater candies. A market has inhabited this place for hundreds of years, but despite the Souq’s traditional feel, it is a noticeably new structure which lacks a certain old-world authenticity—the prior Souq having been torn down and re-built just over a decade ago—but that long-gone era is still palpable in the products, the people, and the herd of camels roaming out front.

The adventurous traveller would be remiss to not book an afternoon sand dune safari. Gulf Adventures is the company to go with, and a scenic hour-long drive outside of town reveals a different kind of mirage than Doha has to offer: vast crescents of dry sand stretch into the distance before curtailing up against the sea. Guides navigate sand craters in jeeps, fearlessly flinging cars over the edges of gullies at a clip of 120-kilometres per hour with passengers buckled in tight, and holding on tighter. It’s a ride of epic proportions as 150-metre tall mountains of sand rise up around, dotted with cars that look like beetles. The setting is exotic—Saudi Arabia can be glimpsed in the distance on a clear day—and this strong sense of place, in an un-air-conditioned expanse of desert, is one of the most authentic that Doha has to offer.

Old Arabian architectural styles are refreshingly referenced at the Sharq Village & Spa, a Ritz-Carlton property. Quite unlike the many cookie-cutter, five-star hotels that Doha has to offer, the beachfront enclave luxuriously recreates a traditional Qatari village. Along with 174 villa accommodations there is the Royal Villa, which sleeps around 25 guests and encompasses an indoor sauna, a pool, and waterfall. Often booked by celebrities and dignitaries, the mansion comes equipped with 15 staff members, if desired, and rooms are appointed with copper, inlaid brass, handwoven carpets, and furnishings from Lebanon, as well as blue marble detailing from Brazil. 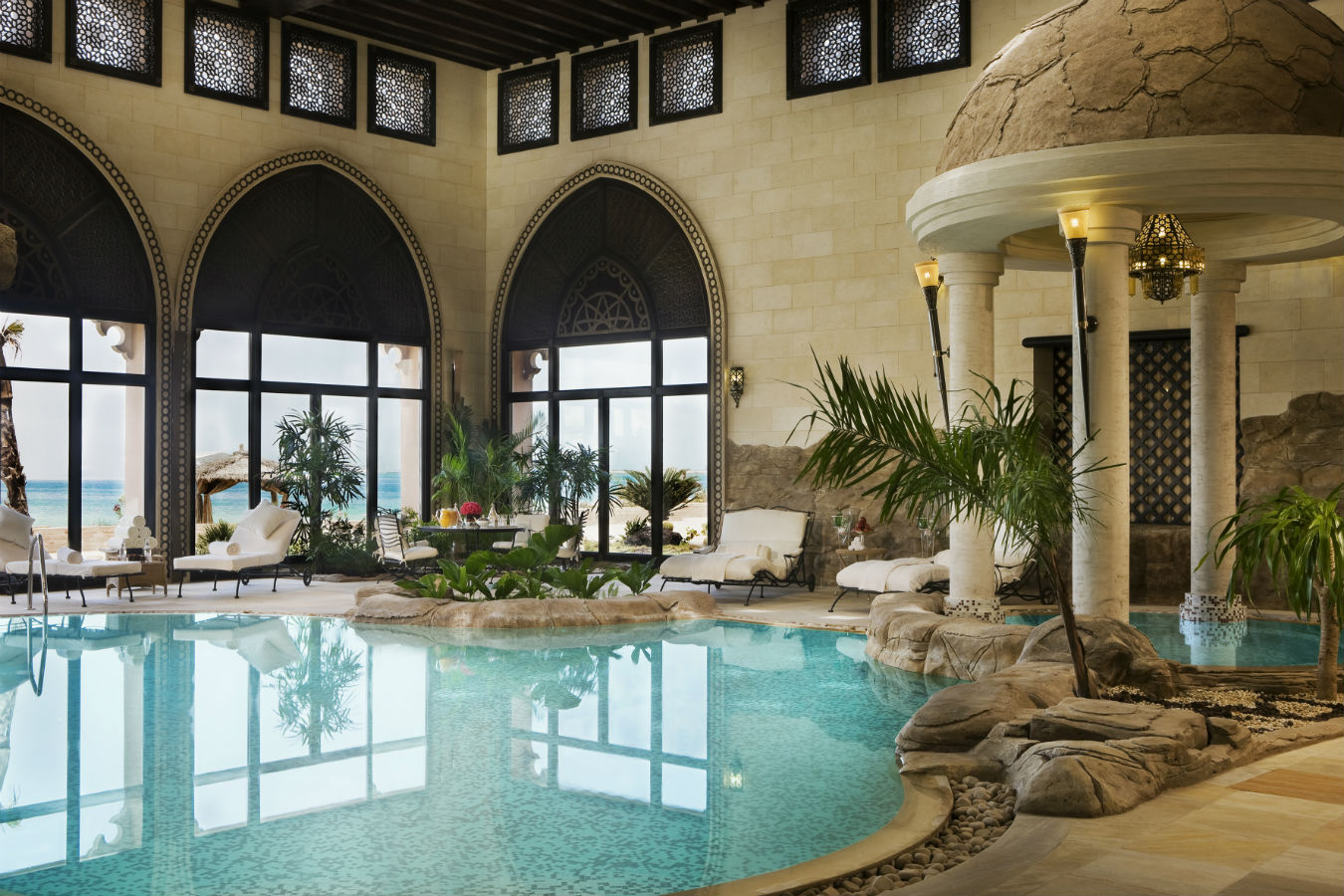 The indoor pool at the Sharq Village & Spa’s Royal Villa.

The Sharq’s other crown jewel is its Six Senses Spa, one of the biggest spas in the Middle East with 6,500 square metres of indoor and outdoor treatment rooms, also built in a traditional Arabian aesthetic. The rambling spa grounds are divided into four separate villages with a large female-only section, making it a favourite among local Qataris; women can remove their traditional dress as soon as they step inside. 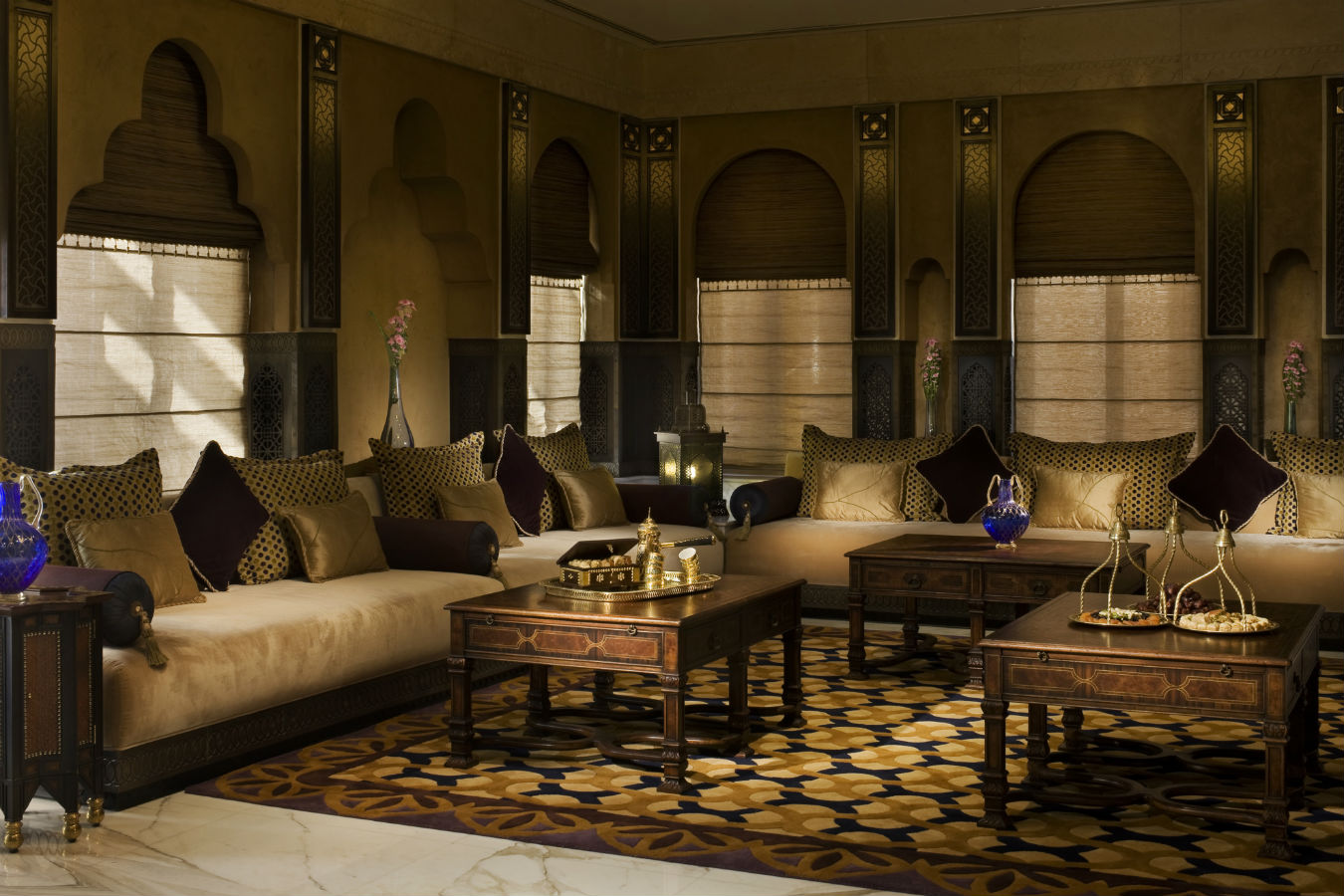 The Sharq Village & Spa’s Royal Villa is outfitted with copper, inlaid brass, handwoven carpets, and furnishings from Lebanon, as well as blue marble detailing from Brazil.

On the edge of town, the city’s Hamad International Airport opened last week after years of delays and construction, with the grand promise of welcoming 50-million passengers annually by 2020. A recent pre-opening hard hat visit revealed a gargantuan air conditioned construction site of bubble-wrapped waiting room chairs and engineers setting up security sensors. The undulating ceiling was beautifully in place, as were the opulent leather-covered Qatar Airways first class check-in desks.

The airport design is inspired by water itself, with a central black dome mosque shaped to look like a rain droplet and its rolling roof echoing the idea of waves. The Qatari ruling family has its own private terminal, which was designed to look like a lotus flower and is strictly for dignitary use. “Even if President Obama arrives on a plane, he lands at the main terminal,” said Leanne Manchanda, head of marketing for the airport. “Only if he arrives on dignitary business, does he land at the royal terminal.” 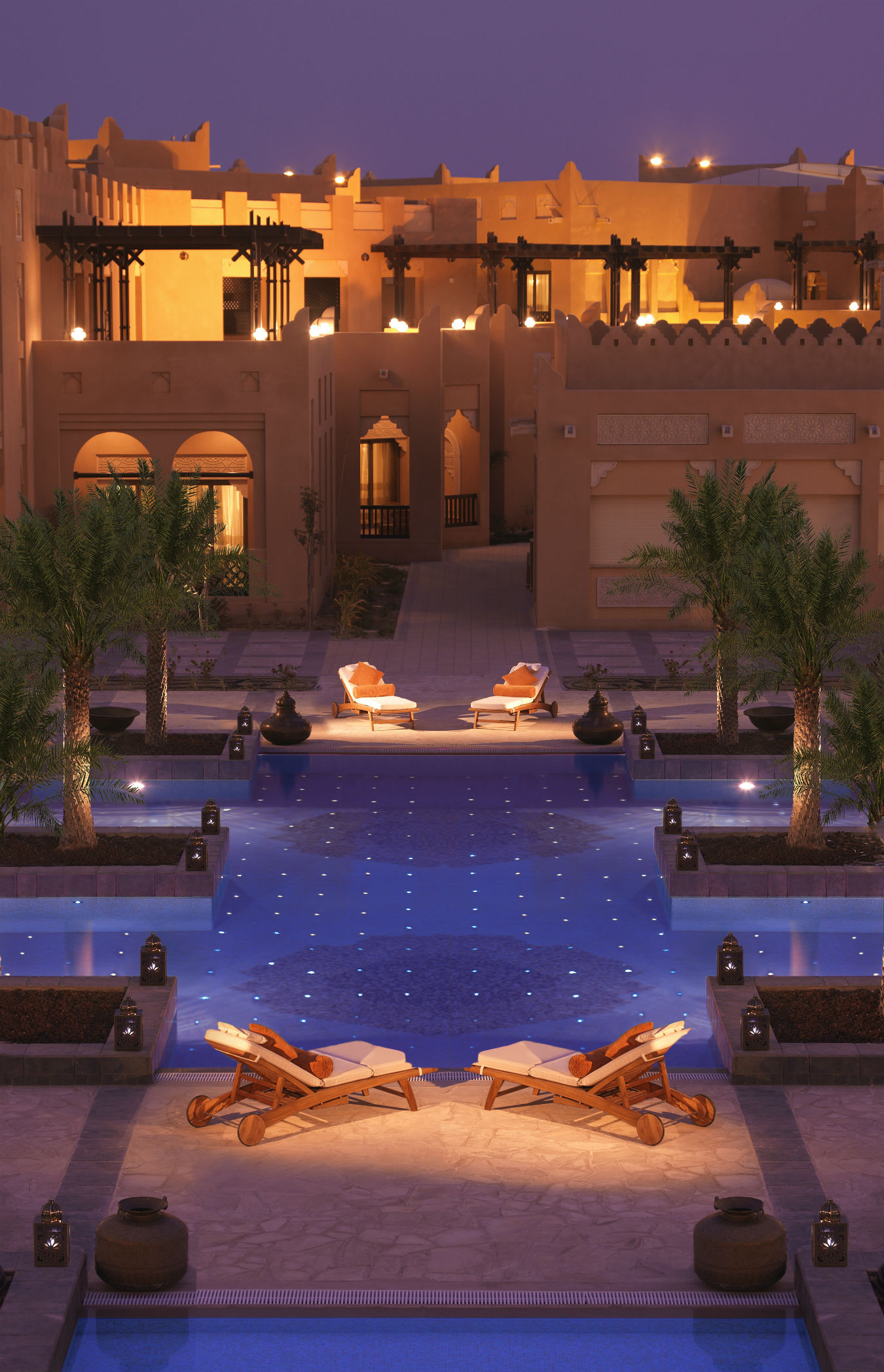 Wandering through the main terminal, all high-tech shine and sheen, is a lesson in feeling dwarfed: it is the size of 50 full-sized football fields, and the structure as a whole is one of the world’s largest mega-projects with lengths of runway to match (the longest is 4,850 metres). “You know, when a country has so much money,” said Manchanda, waving her hand across the expanse of airport, “an experience that money can’t buy becomes the new luxury.”