“Look behind you,” my friend Ashley whispered.

Half our group of nine had grown quiet, while the rest of us—myself included—were still obliviously fiddling with our camera settings and chatting excitedly about the reason we’d come to a 25,000-year-old rainforest in the Southwestern corner of Uganda, just a few miles from the Congo.

I turned to see a large, female mountain gorilla, not four feet from us. She was making fast work of a vine, plucking its leaves with thick, black fingers and bringing them to her mouth. I’d just learned that a gorilla must consume thousands upon thousands of leaves in a single day just to survive, and they mainly forage during the first half of the day. There was plenty of gorilla chow here, in this Disney-like jungle, strung around vines as thick as climbing ropes and covered in a fuzzy, lime-hued moss. Vegetation sprouted from the ground, but it also spooled downward in curtains from a treetop canopy more than 100 feet above our heads. I was so close to this gorilla, I could see each wrinkle around her knuckle joints and make out the dark cracks in her fingernails. I realized my mouth was hanging open in awe.

Our guide, Goreth, motioned for us all to be silent using one in a series of hand motions we’d learned before starting our hour-long hike into the forest (in Uganda, by government regulation, only one group of visitors may trek with one family of gorillas per day, staying in their presence for a single hour). From this point, we’d spend the next 60 minutes in near silence, following the Rushegura family of 18 gorillas and the troupe’s leader, an enormous silverback. Our guides hacked through the brush with machetes, as we ducked under vines and around massive tree trunks, over rocky streams alongside the gorillas, and the hour disappeared quickly, as did the space on my Nikon’s memory card. 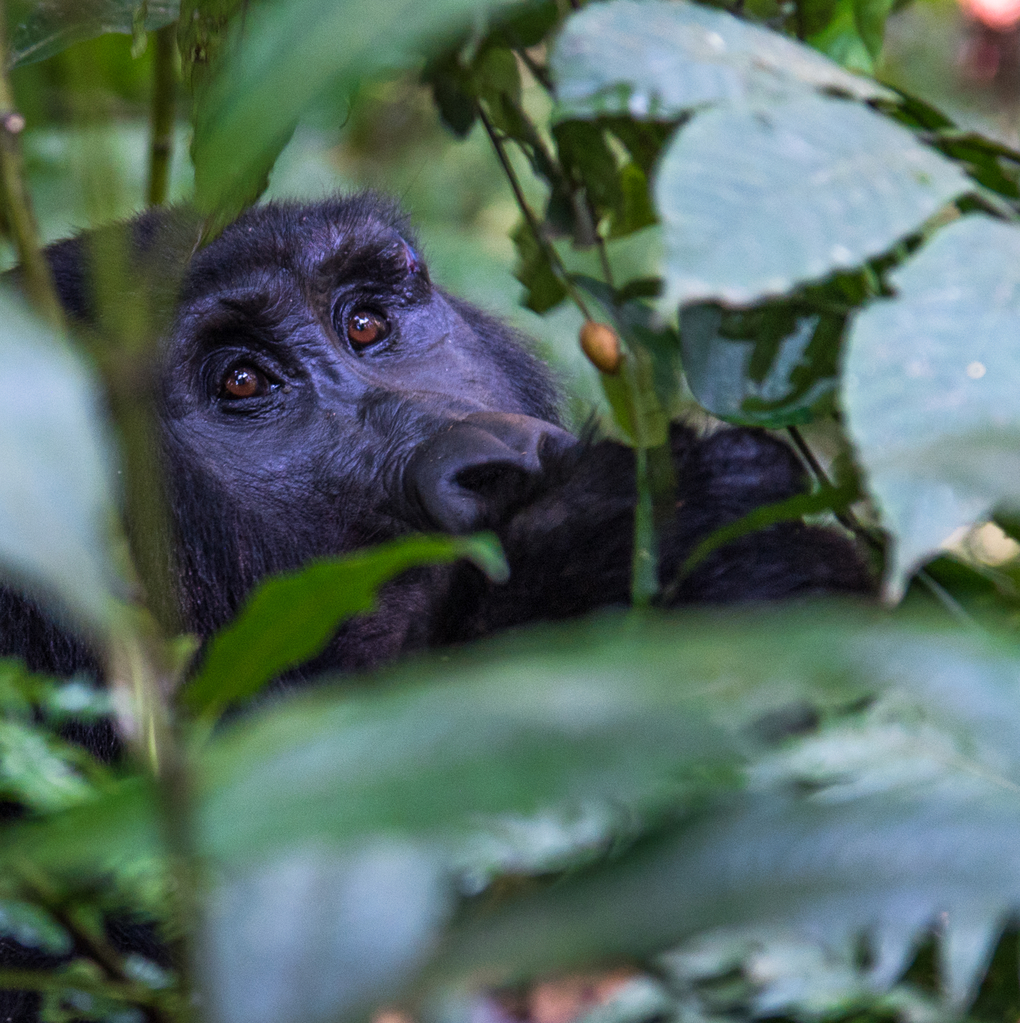 A visit to Uganda’s Bwindi Impenetrable National Park is one of the most immersive safari experiences that you can have on Earth. Most of the world’s remaining wild mountain gorillas live in a pocket of terrain along a rim of the Rift Valley in Uganda, moving freely through Rwanda and the Democratic Republic of Congo. And, while a lot of conservation stories are fraught with heartache, this one is starting to read as a feel-good. Gorillas don’t suffer poachers as do elephants and rhinos, but they are occasionally killed as trophies, and babies have been known to be stolen and sold as pets. Their biggest threats are disease and loss of habitat through deforestation caused by human warfare, resource exploitation, and climate change. This year, however, Uganda will conduct a six-month-long field census on gorilla populations, and the rangers here believe they will return with numbers over 460 for this region alone. The global population of these incredible creatures has risen from only 620 in 1989 to just shy of 1,000 today.

Back in the early 1990s, research teams set out to habituate these mountain gorillas families, spending months with them until the rangers, ecologists, and scientists became part of their everyday landscape. The purpose of introducing of gorilla walks with tourists in 1993 was two-fold. First, the hikes highlight the plight of these shy, elusive creatures. Second, the tourism helps preserve these forests from logging. The income stream benefits the gorillas, as well as neighboring villages, as ticket profits largely go back to local communities. Dozens of outfitters now exist to expose visitors to mountain gorillas in Uganda, Rwanda, and Congo. 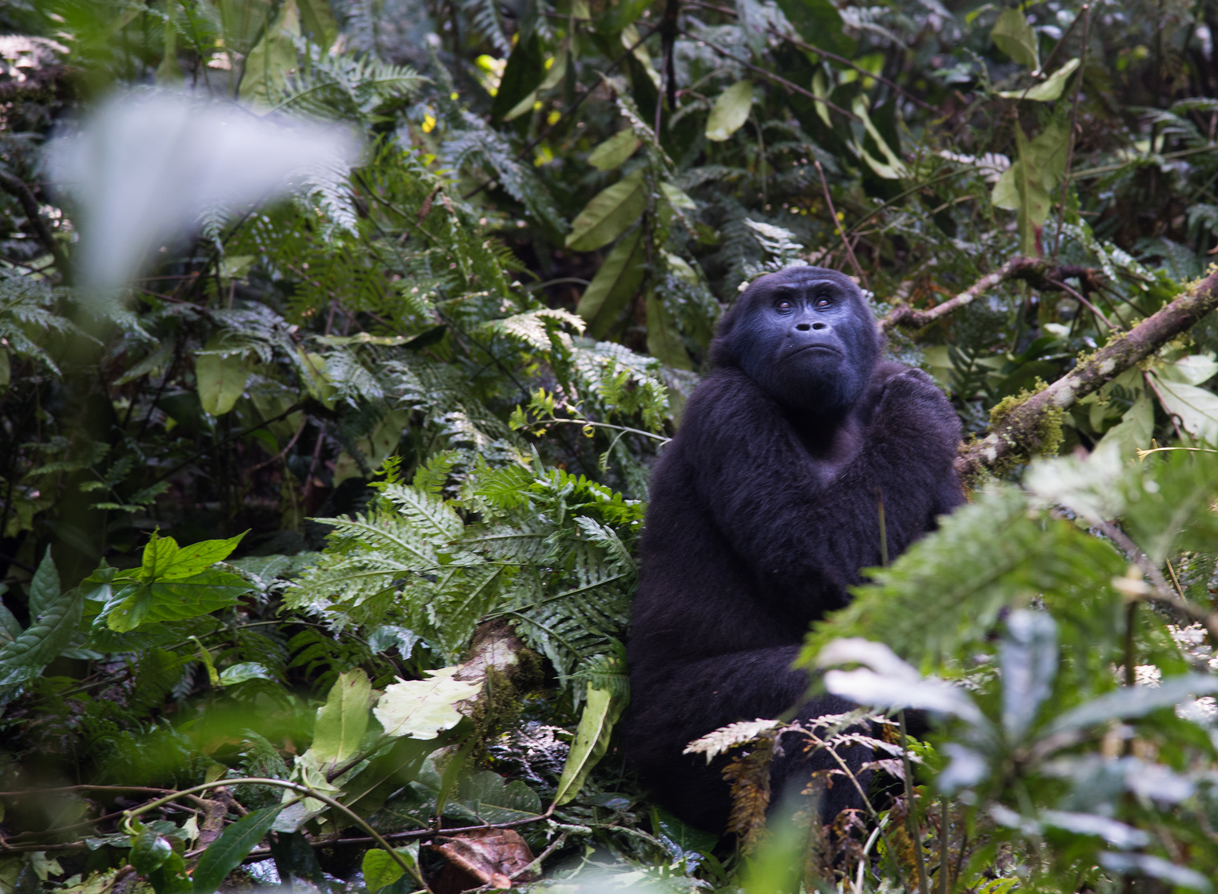 Here are a few helpful pointers, should you choose Bwindi Impenetrable National Park.

FLYING THERE … is easy from Entebbe, which is the main airport town, about two hours from the capital of Kampala. Aerolink has daily charter flights that take just over one hour.

STAY … at the Mahogany Springs Safari Lodge, an incredible, luxury resort with massive, wooden decks overlooking the valley and the mountains beyond. From carefully curated, locally-sourced meals to in-room massages, cultural hikes to meet local villagers to impressive, hillside gardens around the resort, this is an exceptional base for gorilla trekking in the area. Rates from $240 pp/per night (low season) to $287 pp/per night (high season) are based upon double occupancy, with full board included.

PACK … tan and green clothing that covers your wrists and ankles to deter flies and mosquitos, which are drawn to black and blue colours. The hikes can last up to six hours when tracking the gorillas. Sturdy sneakers work, but hiking boots are even better. Layers are a must.

ALSO PACK … a small bottle of detergent. The mud here is intense. The hotels are happy to wash your clothes, but you’ll want to scrub your sneakers and soak your backpack, too.

HIRE … a porter to carry your pack. It costs roughly $15 (U.S.), but it’s an invaluable way to support the community, as well as an amazing opportunity to chat with a local about life in this region and their own incredible gorilla trekking stories.

DON’T LEAVE WITHOUT … venturing down to Bwindi’s main street. The little town is full of charm, from the brightly painted beer signs to the offerings of cheap accommodations and yoga. Find a hand-carved wooden Silverback figurine to take home with you.

HELP FROM HOME … by supporting Gorilla Doctors through donations.

The Lands of East Africa