It’s been over two weeks since I got out of the Lamborghini Huracán Performante Spyder, and I’m still amazed by what it is. By any metric of a performance car, it’s jaw-dropping. Having replaced the aging Gallardo in 2014, the Huracán’s striking good looks and powerful V10 have been the basis of several evolutions, including both four- and two-wheel drive models, and the 2017 introduction of a higher-performance Performante specification.

Brand new for 2018 and looking rather fetching in Rosso Mars paint, bronze wheels, and a cockpit covered in dark Alcantara and dramatic forged carbon, this is the latest evolution of the Huracán: the Performante Spyder. It’s a head-turning, ear-splitting, tire-shredding, thrill machine that is not only lighter and more powerful than a standard Huracán, but also makes use of some next-level active aerodynamics to ensure it remains sticky in the corners and slippery on the straightaways.

The level of performance cannot be overstated, with the coupe version of the Performante establishing a production car lap record on the infamous Nürburgring in Germany. While that lap record was eventually beaten, it’s worth noting that the Huracán Performante lost its record to the new Lamborghini Aventador SVJ, a much more powerful car that also features the aerodynamic abilities established by the Performante (more on that in a moment). First, the basics. The Huracán Performante Spyder is an all-wheel drive, two-seat, soft top convertible with a 5.2-litre V10 engine situated right behind the seats. That engine, which is one of the best I’ve ever experienced, is naturally aspirated (meaning no turbochargers or supercharging) and creates a simply nutty 640 horsepower and 442 lb-ft of torque. With no roof to spoil the sunshine or the incredible noise from that V10’s raucous 8500 rpm redline, the entirety of that power is delivered to all four wheels via a razor sharp dual clutch transmission. While you can leave the Performante in Strada mode and the transmission in automatic, I highly recommend hitting the switch on the steering wheel to activate either the Sport or Corsa (race) modes, which make the Performante Spyder all the more aggressive.

On a good bit of road, it’s a feast for the senses. Loud, stupendously fast, and just so much fun to drive. Sure, the convertible version is more than 100 kg heavier than the coupe, but the Spyder is much less likely to be used as a track car. So put the top down, shut off the stereo, and enjoy the incredible sounds—a collection of lively induction noise, screaming exhaust notes, and endless pops and crackles on overrun.

The Performante Spyder is one of the most exhilarating and dynamic cars I’ve ever driven.

With four-wheel drive, the handling is progressive and sharp, but keep a close eye on your speed, as the Performante Spyder passes 100 km/h in 3.1 seconds and will crest 200 km/h in as little as 9.3. The max speed? A roaring 325 km/h—you may want to put the top up for that. With high-performance Pirelli P-Zero Corsa tires and massive carbon ceramic brakes, both grip and stopping power abounds.

As I alluded to above, the Performante (and this Spyder version) boasts a fascinating active aerodynamic system called Aerodinamica Lamborghini Attiva, or ALA for short. This system is comprised of a series of vents and flaps in the front and rear spoilers that can be opened or closed based on how the car is being driven. This includes a forged composite rear wing that actively promotes or stalls the downforce of the wing and can even provide downforce to one side of the car, helping to increase mid-corner grip. ALA is the Huracán Performante’s technological calling card and a similar system is now in use in the brand new king of the Nürburgring, the Aventador SVJ. Lamborghini is not messing around with the Performante or the SVJ, both of which are easily among the fastest and most competent road cars in the world. While the striking red paint job and gold-tone wheels largely steal the show from the curb, the interior is equally as avant-garde. A mix of dark grey Alcantara and Lamborghini’s own wild looking forged composite accents (essentially chopped carbon fiber that looks a bit like granite, but with a more swirled pattern), the layout and controls are surprisingly intuitive and all of the display requirements are carried out on a fully digital drivers gauge pack. From speed and tachymeter to multimedia, vehicle settings, and even navigation, it’s all right in front of you from the driver’s seat.

As fun as the Huracán Performante is, it’s not perfect. The seating position is problematic if you’re as tall as I am (191 cm), and the seats don’t have much in the way of cushioning. My height was also an issue for visibility, with my eyeline being intersected by the top of the steeply raked windshield, meaning if the top was up, I couldn’t see the traffic lights without ducking forward. With the top down, visibility was not an issue. I might have climbed out of the Performante Spyder like a much older man after a few hours behind the wheel, but you know what? Totally worth it. 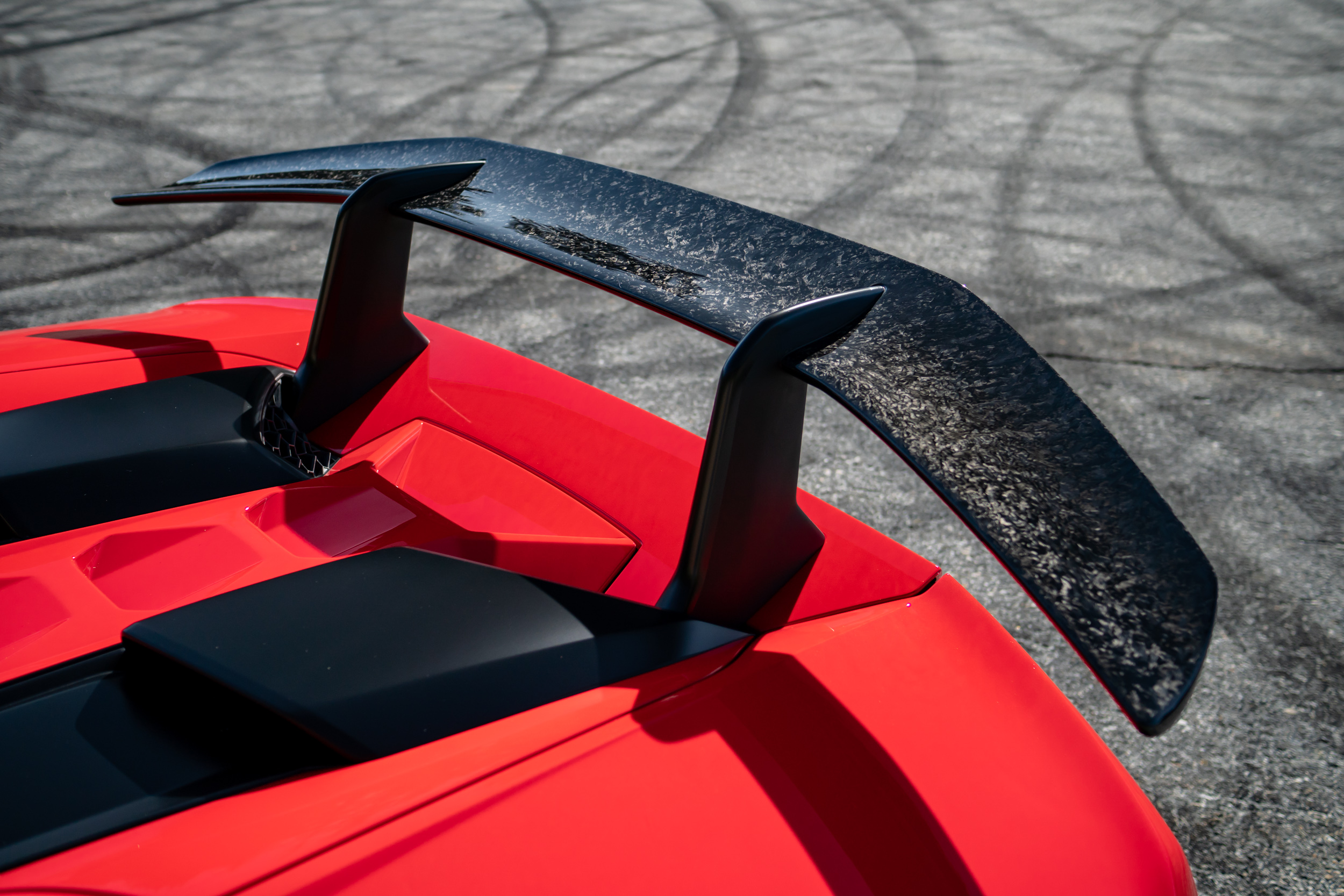 Without equivocation, the Performante Spyder is one of the most exhilarating and dynamic cars I’ve ever driven, representing the sum of many very impressive elements. Its engine is a dream, its performance so accessible, and it has the wild looks and charm of a true Lamborghini. While likely not my first choice for a long trip or daily driving (neither of which are really intended usage for the Performante), this $340,520 supercar takes an excellent platform and extracts an unbelievable amount of performance from a flashy, yet astoundingly fun package.