Prestige Yachts enjoys a global reputation for building beautiful and luxurious sport yachts that always seem to exceed expectations. That certainly applies in the case of the X70—an all-new luxury family cruiser that, in the company’s words, combines “the comforts of a luxurious villa and the pleasures of life at sea.”

The X70 starts with a proven foundation, riding on the same hull and dependable Volvo Penta IPS pod-steering engine arrangement as the Prestige 680 Flybridge model. But that’s the extent of similarity between the two because, from the waterline up, the X70 is a different breed.

The most obvious feature setting the X70 apart is the elimination of the traditional mid-ship side decks, allowing the boat’s full width of 16 feet, eight inches to be used for interior accommodation. The side decks are still there, just elevated to the flybridge level to allow the extra interior space. The downside to this arrangement is that to get to the bow, you have to climb up on the flybridge then descend down a second set of stairs up front. Prestige argues that since owners and guests are likely to spend far more time on the main deck than on the bow, it’s a trade-off potential buyers are willing to make. 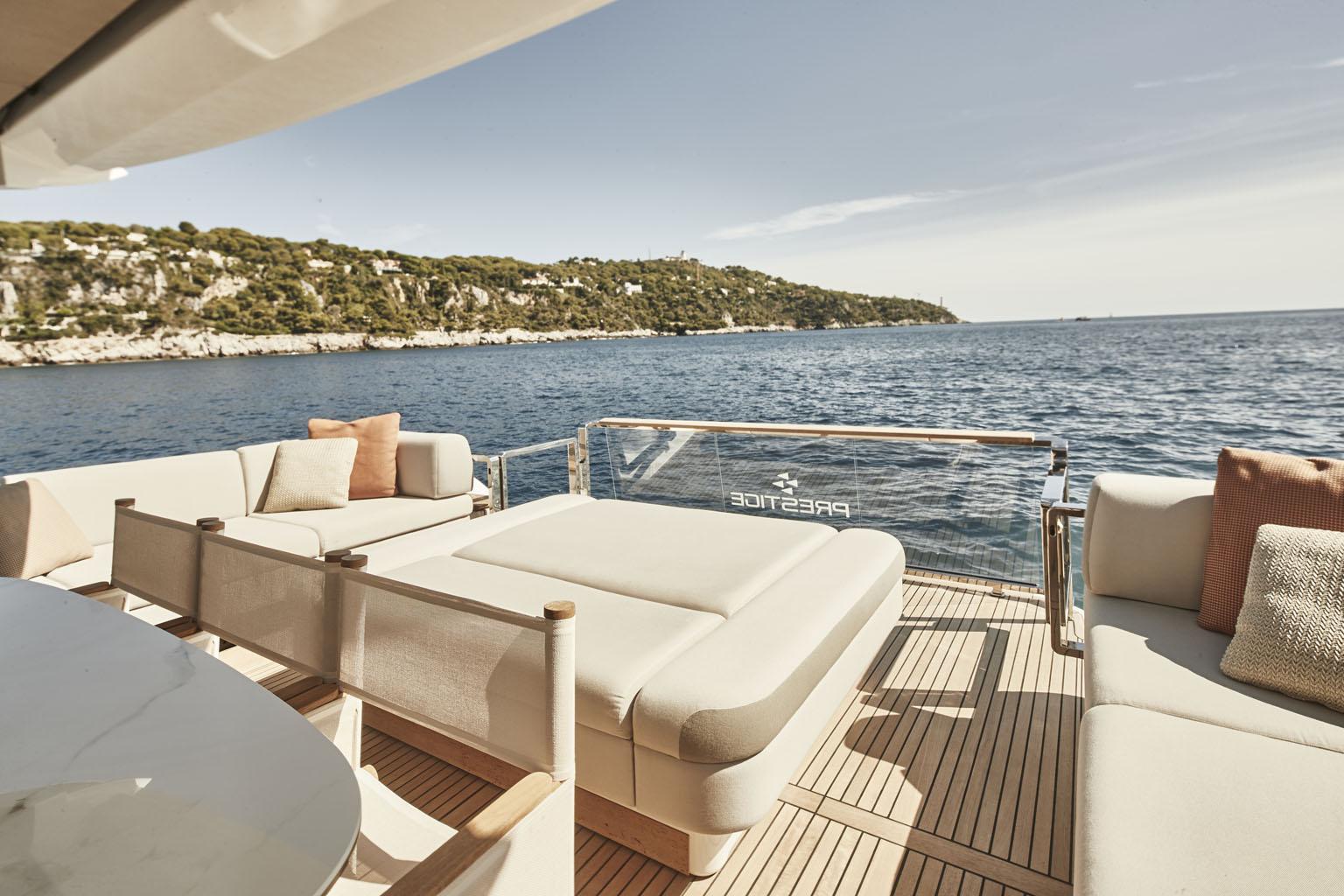 The other element that becomes apparent as you walk through the X70 is just how luxurious this yacht really is, with standard features like a custom hard top with power moonroof, a stabilization system, and a fully hydraulic swim platform. That’s impressive for a yacht with a starting point in the range of $5 million Canadian, leading Prestige to refer to the X70 as its “mini-superyacht.”

Engine choices include twin Volvo Penta IPS 1200 engines generating 900 horsepower each, or twin IPS 1350s that generate 1,000 horsepower apiece. In view of the minimal cost difference, most buyers will opt for the twin 1350s and enjoy their added power, giving this yacht a top speed in the range of just under 55 km/hr. Cruising at just under 40 km/hr, the X70 enjoys a range of up to 650 kilometres. 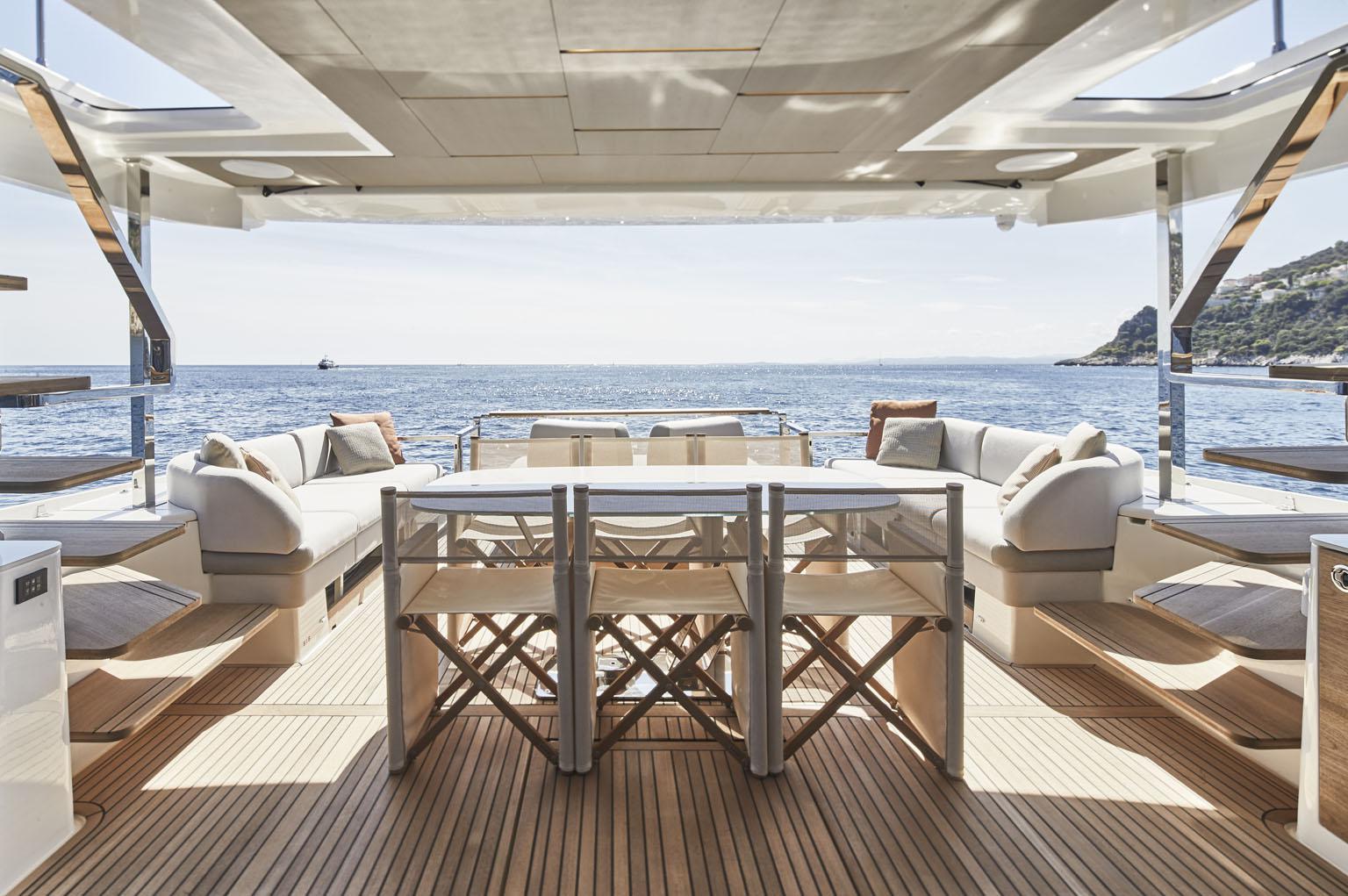 The easiest place to board at the dock is via the X70s large, teak-lined swim platform, where in true superyacht style, twin staircases lead up to the cockpit. The central portion of the transom opens to reveal a beach club feature, with comfortable seating and a standard Fusion stereo. There’s also a standard stand-up shower to the port side, making it easy to rinse off the salt before heading back upstairs.

Prestige’s talent for maximizing living space is obvious once you arrive in the cockpit. Unlike most flybridge boats which put the emphasis on indoor space, the main deck layout on the X70 is closer to a 50-50 split between the outdoor cockpit and the indoor salon.

The aft end of the X70 salon opens fully, allowing the outdoor cockpit and indoor salon to merge as a single continuous living space. Unlike many of its contemporaries, the X70 positions its galley not immediately inside the salon doors but farther forward in an amidships position, allowing both areas to be easily served from a common location. The galley features the latest high-end Miele appliances, including a four-burner induction stove, a convection oven, a coffee maker, and a residential-sized refrigerator/freezer. 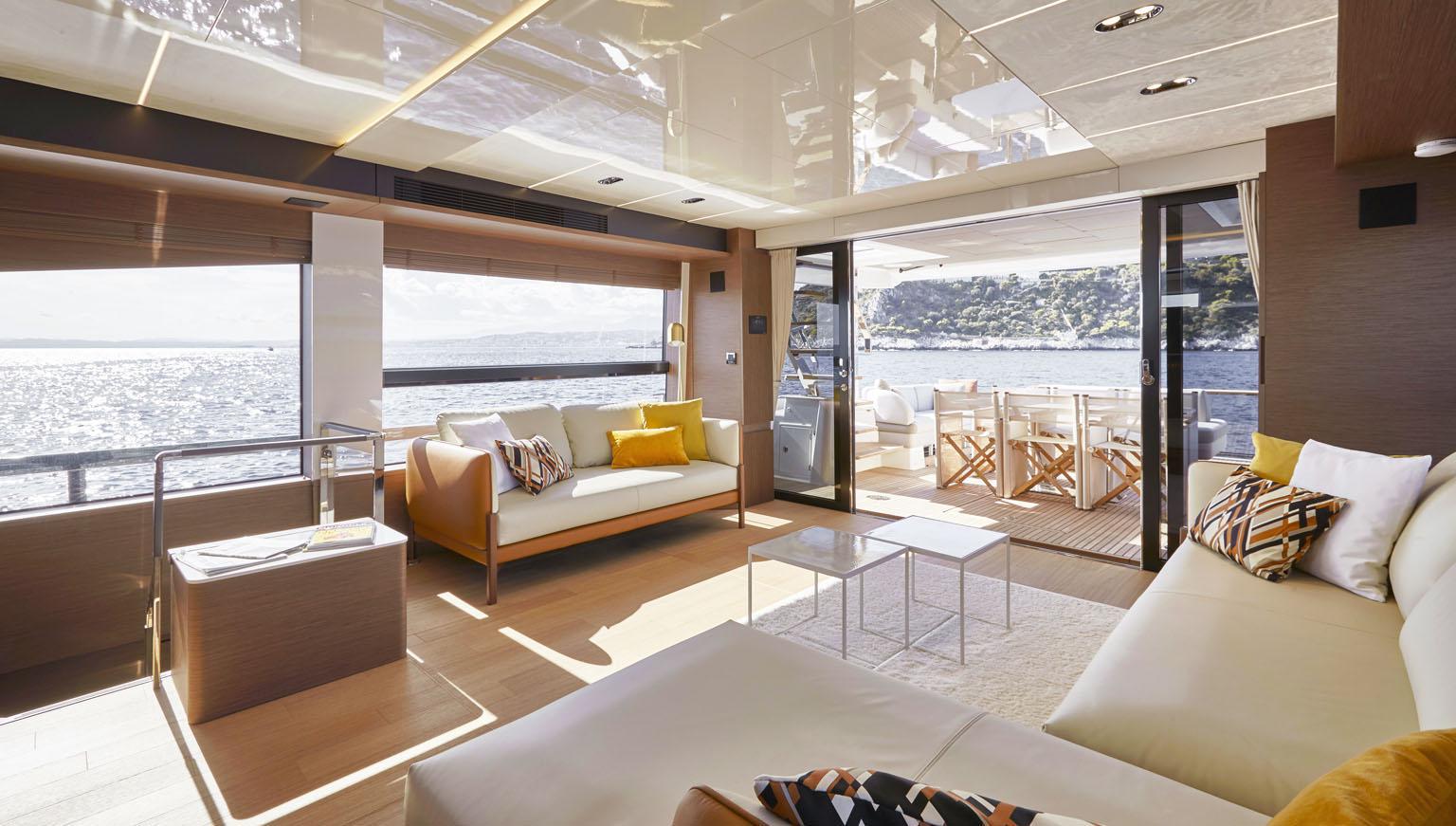 The salon itself is tastefully decorated and surrounded by oversized windows that bathe the space in natural sunlight. The windows and blinds are each on electric actuators so either or both can be easily opened at the touch of a button. A starboard-side door at the helm can also be opened to let even more air flow through, negating the need to run the air conditioner on all but the hottest days.

Up front, the main deck helm station features a single captain’s seat and comfy lounges on either side. Three multifunction, touch-screen displays keep the captain informed at all times, while overhead hatches for added ventilation are a nice touch.

A staircase to the port side of the salon just aft of the helm leads below to the master suite, which features a queen bed, a stylish bureau, and an enormous walk-in wardrobe, complete with a safe. The spacious ensuite head is tastefully finished and accented with a separate shower complete with a rain head. 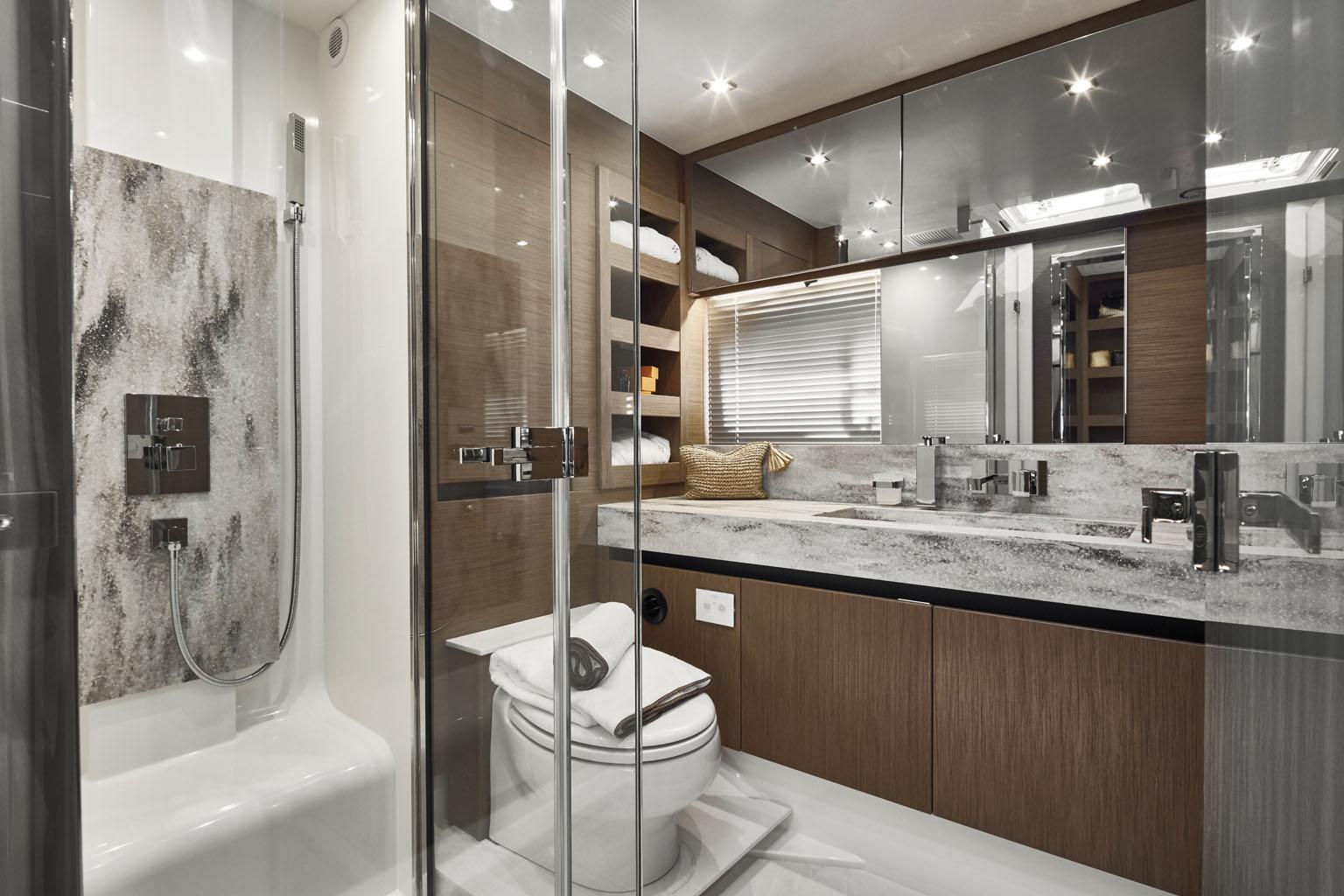 A second staircase on the port side of the salon leads below to the guest accommodations. A VIP suite features its own queen bed, an ensuite head with separate shower, a small bureau, and plenty of storage. The X70 can be configured in either a three-cabin layout with a second VIP suite or a four-cabin floor plan that adds two smaller suites, each with twin beds.

Back on the main deck, twin staircases in the cockpit lead up to the flybridge, once again emphasizing the X70’s mini-superyacht feel. One option is to delete the starboard-side staircase and replace it with a wet bar and grill, something that will appeal to families who frequently entertain guests. 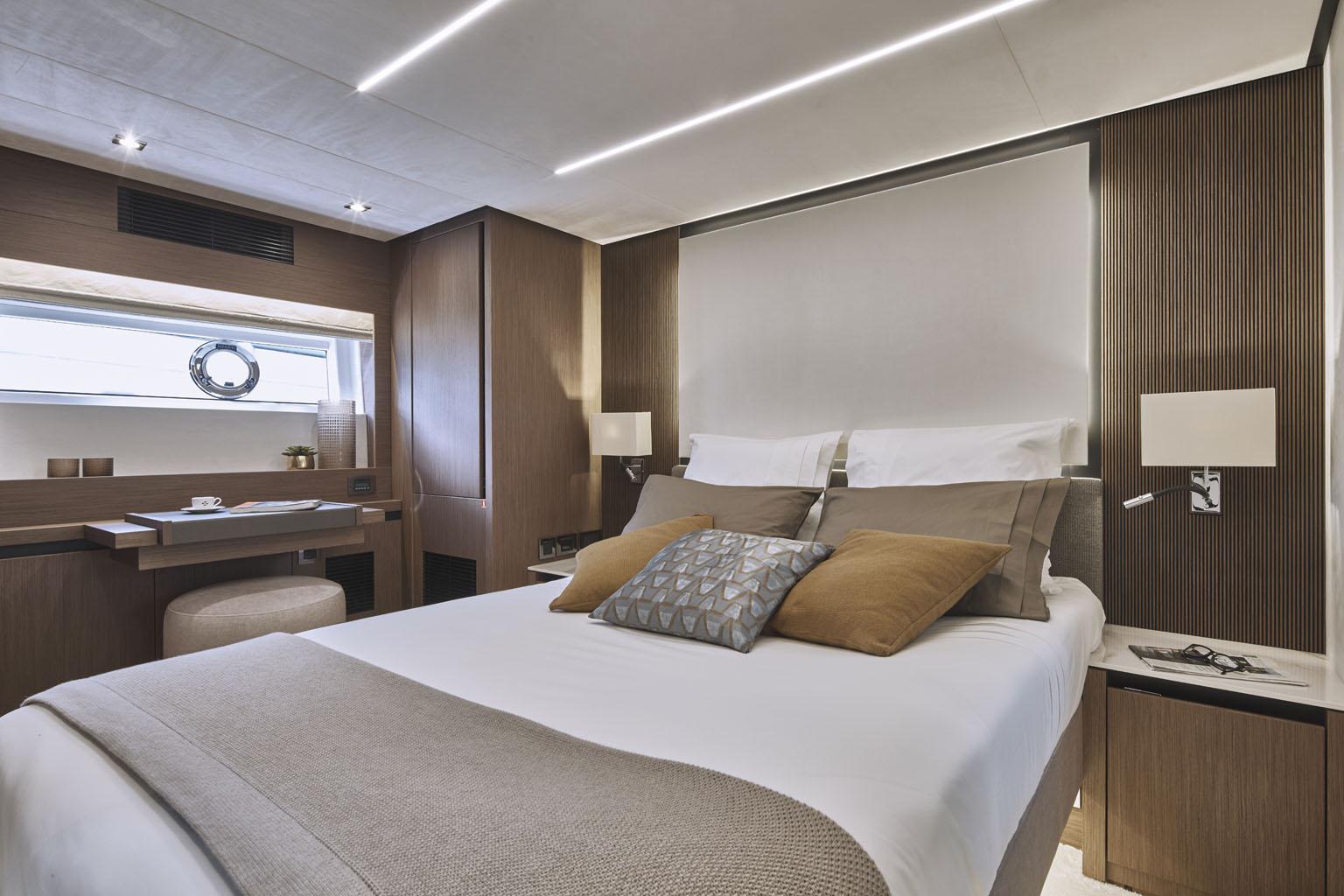 Up on the flybridge itself, there is an island wet bar with its own grill and sink, a table for lunch with a view, and a big L-shaped lounge seat to starboard of the upper helm station. The overhead hardtop and power moonroof come standard, and the entire flybridge can be enclosed if desired.

Those who love the idea of a superyacht but wince at the super pricetag will find much to like about the Prestige X70. A $5-million starting price is still nothing to sneer at, but in terms of what this boat delivers, it almost seems like a steal. 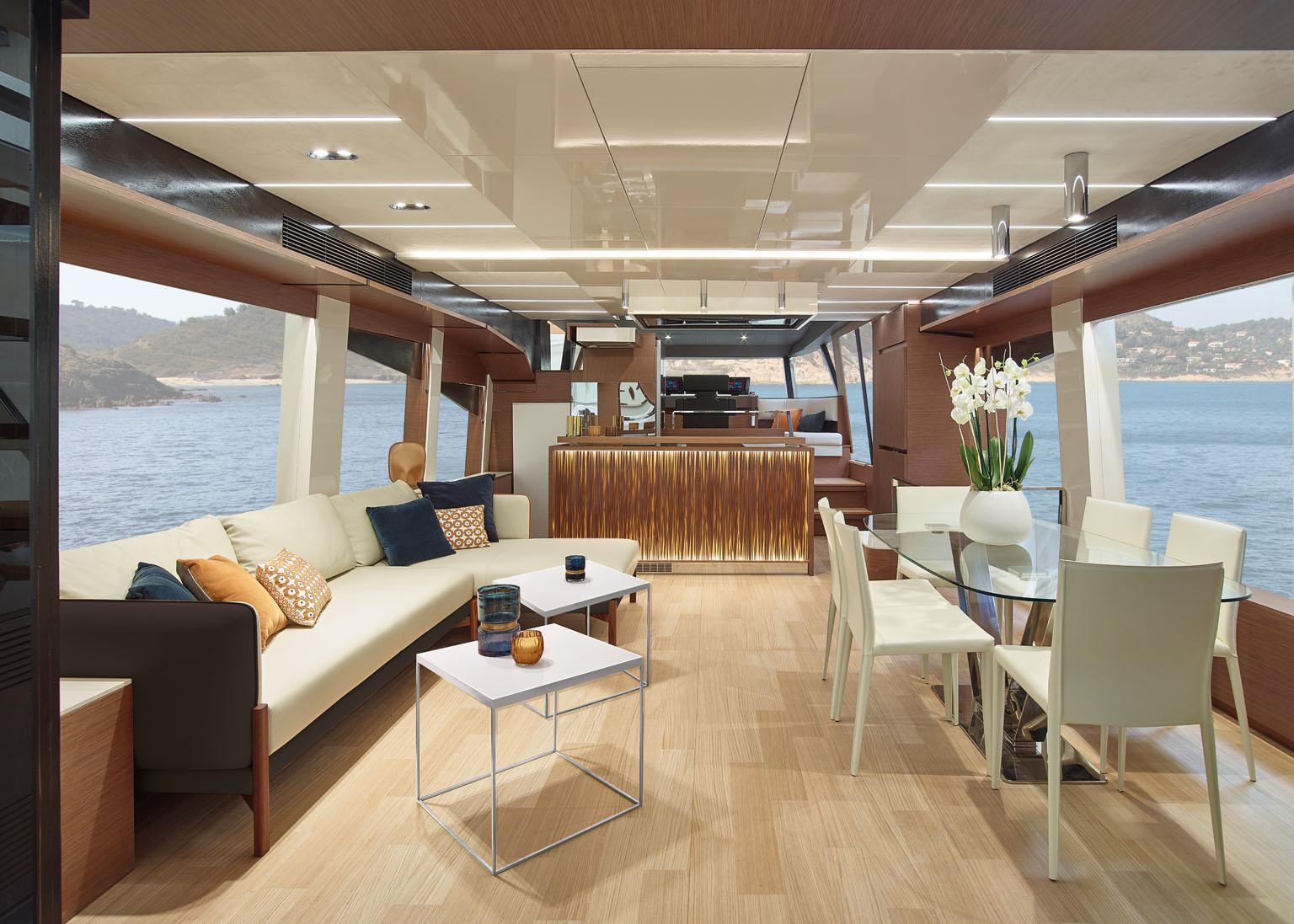