While unquestionably one of the more dramatic supercar forms on the market, the current Lamborghini Aventador is some six years old, having been released in 2011. That may be long in the tooth for a regular car, but it’s well within Lamborghini’s wheelhouse to keep their big V12 cars on the market for an unusually long season. The previous Murcièlago was in production for nine years, preceding an 11-year span within which the Diablo could be found in one version or another.

The key word is “version”, because, while Lamborghini may keep a model in showrooms longer than some of its peers, they keep their line up (which at its core is just two cars) fresh by releasing special versions throughout the model’s lifespan. While this is not a new idea, nor in any way limited to Lamborghini, it has become a key element in the brand’s cult following. Enthusiasts fawn over the differences between a Miura P400S and the later Jota, or the iterative progression in design between the earlier Diablo SE30 and the later Diablo 6.0. 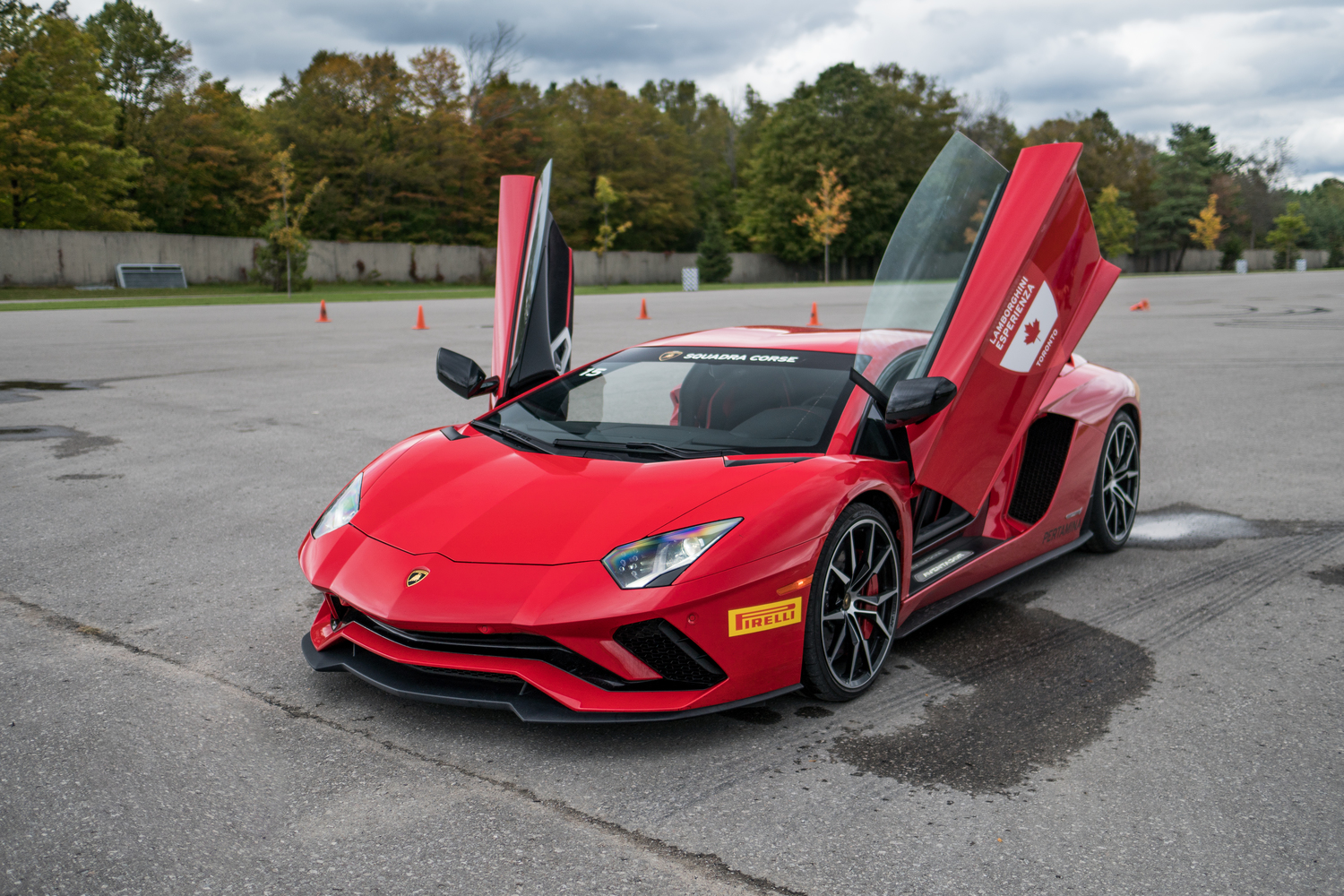 With the newly offered Aventador S Coupé, Lamborghini has updated their flagship supercar with some subtle but welcome improvements. At its core, the Aventador S is the same formula established by the standard Aventador LP 700-4; long, wide, hugely powerful, and audacious from any angle. The passenger cell is a carbon-fiber monocoque and it sits in front of a massive rear-mounted 6.5-litre V12 engine. Devoid of turbochargers and ready to rev to a raucous redline of 9000 rpm, the engine of the Aventador S is incredible. While much of the modern car market is turning to turbocharging and hybrid technology to increase power and aid efficiency, the Aventador remains resolutely old school, following the exact same supercar format set forth by the genre-defining Miura back in 1966.

With 740 horsepower and 507 lb-ft of torque, the Aventador S has the grunt to match its muscular physique. Tearing a 2.9s run to 100 kph on its way to a top speed of 217 mph, the Aventador S is so fast it’s hard to describe. The character of that V12, especially above 5000 rpm, is very special. It’s raw, eager, linear, and sounds wonderful. Unhinged and distinctive, the Aventador is one of the best sounding cars in the entire world, and the S is no different.

Unhinged and distinctive, the Aventador is one of the best sounding cars in the entire world, and the S is no different.

I drove the Aventador S for an afternoon at Canadian Tire Motorsport Park in Ontario, about an hour outside of Toronto. The Aventador S feels monstrous at the track, devouring every inch of the tight and curvy path. Every one of my inputs is met with a full force reply from the car, which seems to prefer that a driver roll up their sleeves and get to work. This car is a handful, and in a track setting the Aventador S’s entire demeanor is raw, punchy, and undeniably fun; preferring high-revs, hard braking, and a cautious respect for the throttle. 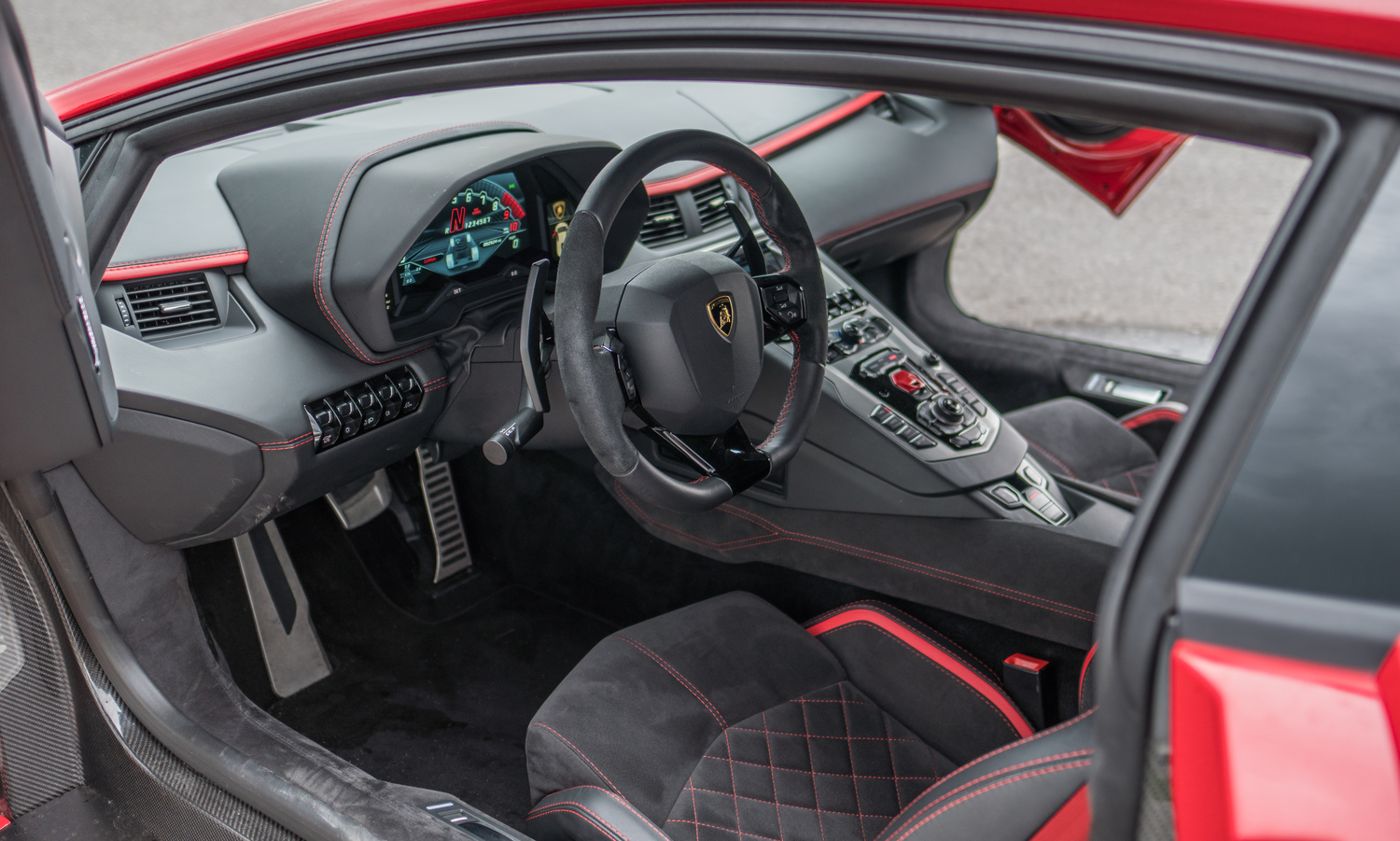 As with most Lamborghinis, the Aventador S has all-wheel drive and rides on a tonne of tire, with custom Pirelli P Zeros at 255 up front and a gargantuan 355 in the rear. Stability is enhanced by the Aventador S’s inclusion of four-wheel steering, which makes this large and very wide car nimbler at slow speeds and more stable at high speeds. Running the slalom, the Avendator S rotates quickly and progressively, aided by the slight turn of the rear wheels to keep that long wheelbase feeling tight and direct. Directional changes are hard and fast and, being an AWD car, you brake hard, point the car into the corner, and the let the V12 do its thing to get you out of the hole.

The Aventador S comes standard with carbon ceramic brakes and an active suspension with state-of-the-art magneto-rheological shock absorbers. This combination does really well on the track, keeping the Aventador S predictable yet playful at the limit. Combined with the Lamborghini Active Vehicle Dynamics system, the Aventador S can be configured for the current road setting (street, sport, or race modes) or to the driver’s preference in “Ego” mode. Ego mode is new for the Aventador S and is quite likely a huge improvement for those who plan to use their Aventador S on mixed roads. Ego allows the powertrain, suspension, and steering to be set independently, so you can have the suspension soft and the steering light, but the engine at its most sporty setting.

Nothing on the road looks like a Lamborghini, and the Aventador S is stunning to behold.

Moving through the gears you find what might be the most noticeable hold over from the Aventador’s 6 years on the market, the transmission. Although slightly revised for this model, the Aventador S uses the same transmission as the standard Aventador, a 7-speed single clutch box that can run in full automatic or via the large paddles behind the steering wheel. While lapping the track, the transmission performs well, offering fast and hugely aggressive upshifts that kick you in the back as you ride a wall of torque towards that 9000 rpm redline. At lower speeds, or when crawling into the pit lane, it’s clear that the transmission has been tuned for performance and not general comfort. While certainly not as silky smooth as some of the dual clutch units found on other supercars, it would be interesting to see how this transmission responds to daily use in traffic or a normal trip across town. 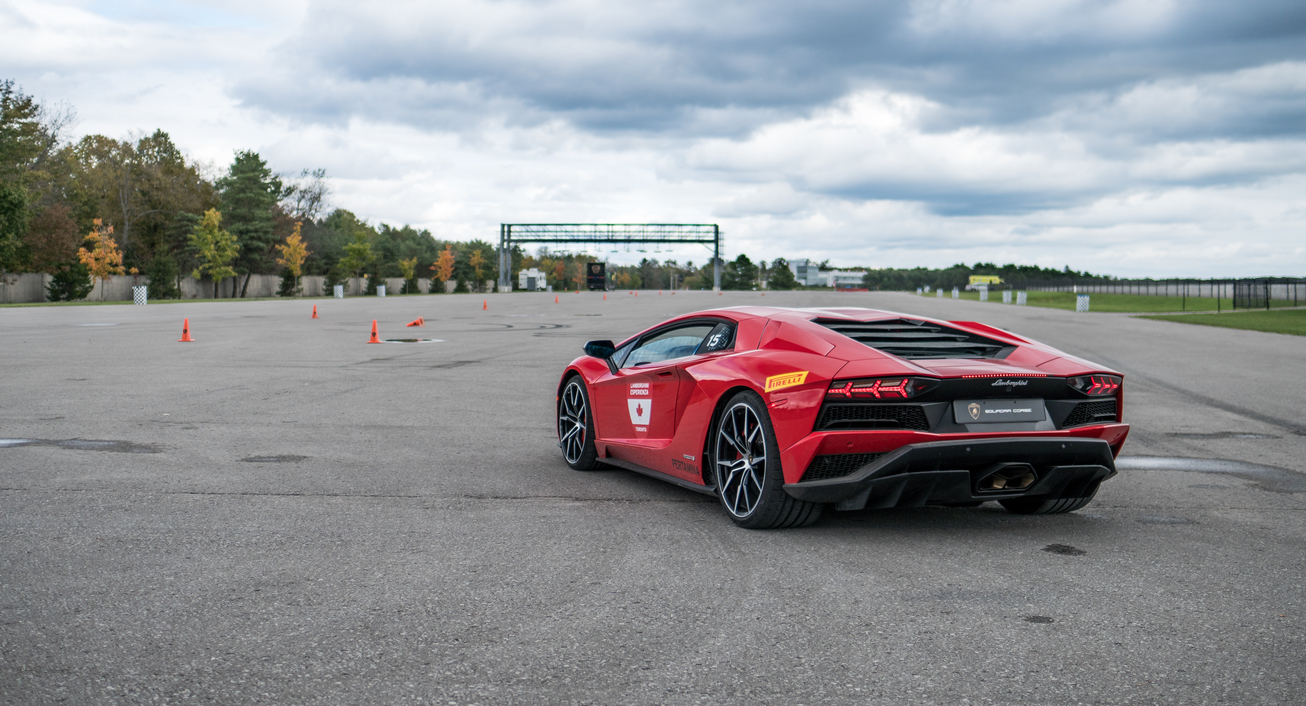 In keeping with Lamborghini’s established pattern of cohesion in the design of the Aventador S, the interior is also an eye-catching affair. Loosely styled to remind occupants of the cockpit of a fighter jet, the leather-wrapped expanse of the cabin is replete with a great many switches, knobs, and even a covered start/stop button. Space is at a premium, especially for taller drivers.

Nothing on the road looks like a Lamborghini, and the Aventador S is stunning to behold, especially in Rosso Mars (red) or New Giallo Orion (yellow). While the basic shape remains largely unchanged for the standard Aventador, the rear haunches have been given a more pronounced curve that harkens back to past Lamborghini designs and the front and rear splitters have been updated to promote additional airflow and downforce. It all comes together, and the Aventador S looks special and undeniably exotic.

The Aventador S drives very much as it looks. It is an animal, and driving it on a track felt like an attempt at taming a wild beast. As a road car, the Aventador S is a consummate and highly entertaining Lamborghini, it’s stunning to look at, sounds wonderful, and the entire driving experience is derived from that incredible V12. Starting at $463,775, the Aventador S is nimble, more customizable, and just so much fun to drive.