Passing Hellhole Canyon, I’m surging down the far side of the mountains east of San Diego on the incredible and winding Montezuma Valley Road. Looking out the windscreen of a roaring Aston Martin, my view is filled with blue sky and the sharp contrast of the landscape as dry inland hills giveaway to the open expanse of the desert.

A mix of jaw-dropping scenery and entertaining roadway, the route out of San Diego winds up and then down the 5000 foot bulk of Palomar Mountain, cutting into the dry desert between Palomar and the Salton Sea. Ranking among the best I’ve ever driven, these roads are fast, tight, nicely paved, and all but empty. This is an ideal setting in which to bear witness to an uncommon combination from Aston Martin, a big GT car with a V8. Especially when considering their longstanding DB series, Aston Martin is well known for its beautiful designs and its inclusion of an old-school full-fat V12 engine. 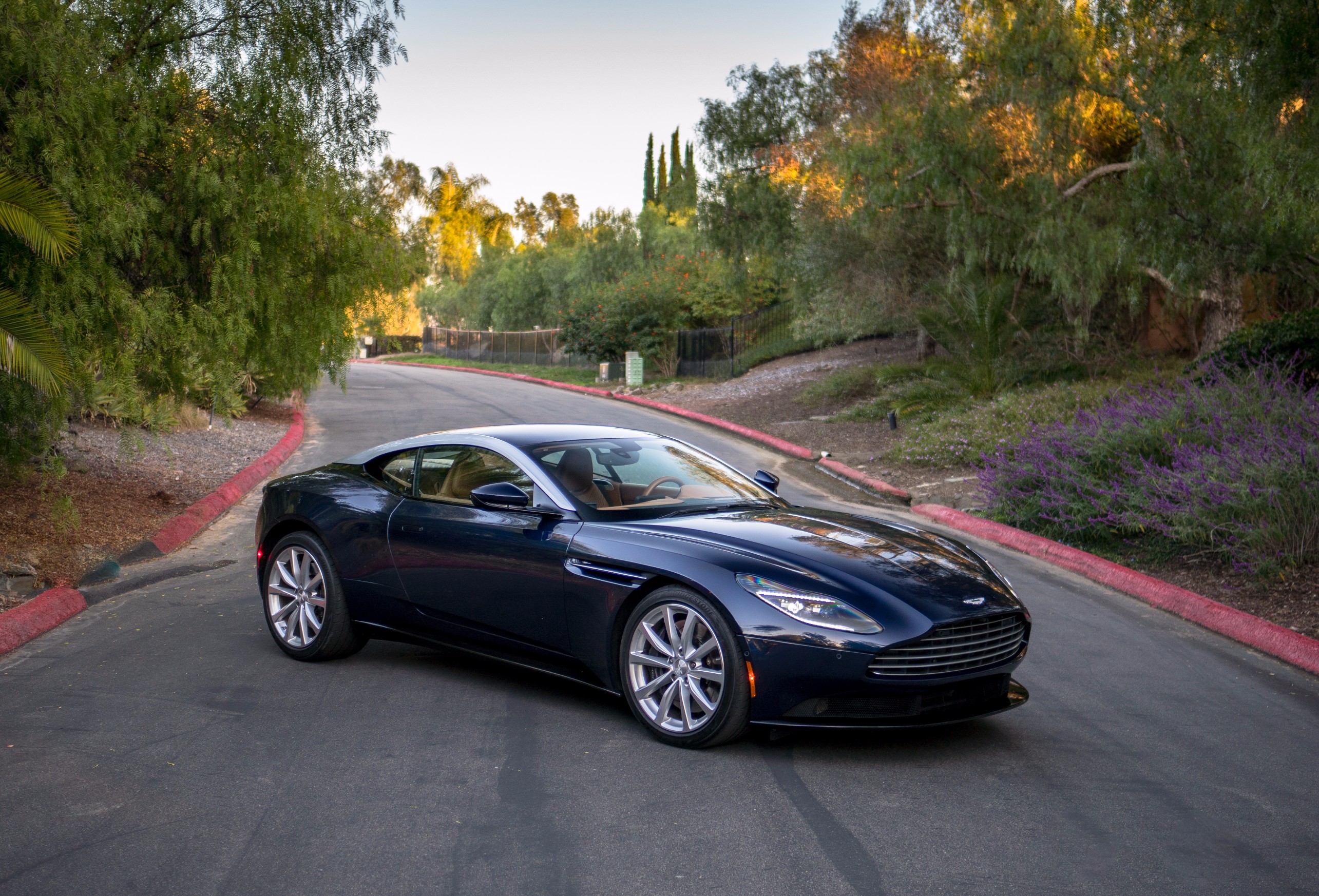 For the latest evolution of their flagship coupe, the DB11, Aston is offering a V8 alongside the not-long-for-this-world charm of their 5.2-liter V12. This is the combined effect of the rise of turbocharging and the never-ending push for efficiency via smaller engine displacements. It’s a big change for Aston and while they have used V8 engines in other cars, namely the Vantage, they sourced an impressive new motor for this next generation application. Rocking a 4-liter twin turbo V8 from Mercedes-Benz, the DB11 V8 boasts the same base engine that is used in Merc’s own rowdy AMG GT sports car.

The V8 is rock and roll; loud, fast, and with something of a chip on its shoulder.

Pulling out of a tight second gear corner, the 503 horsepower DB11 V8 is eager to show that it’s no slouch when it comes to pace, with a firm pull that turns into a full-on punch as the turbochargers kick in. While zero to 60 is a hair slower than the V12, the V8 still gets it done in a brisk four seconds and I did not have the space (nor the legal climate) to test the V8’s stated top speed of 301 kph. Offering a direct benefit to the handling characteristics during more spirited driving, the V8 is some 115 kg lighter than the V12, with a total and stately curb weight of 1533 kilograms.

Somehow, even accounting for the smaller engine, these technical figures seem pedestrian when trying to explain the rather special experience of driving the DB11. Regardless of its V12 sibling, the V8 is very fast, makes an excellent noise, and offers handling that mixes the smooth compliance of a GT car with the ability to make the most out of an amazing road. The V12 carries an undeniable ethos and enthusiast mindshare, but like youth dismissing the musical tastes of their parents, the V8 is rock and roll; loud, fast, and with something of a chip on its shoulder. 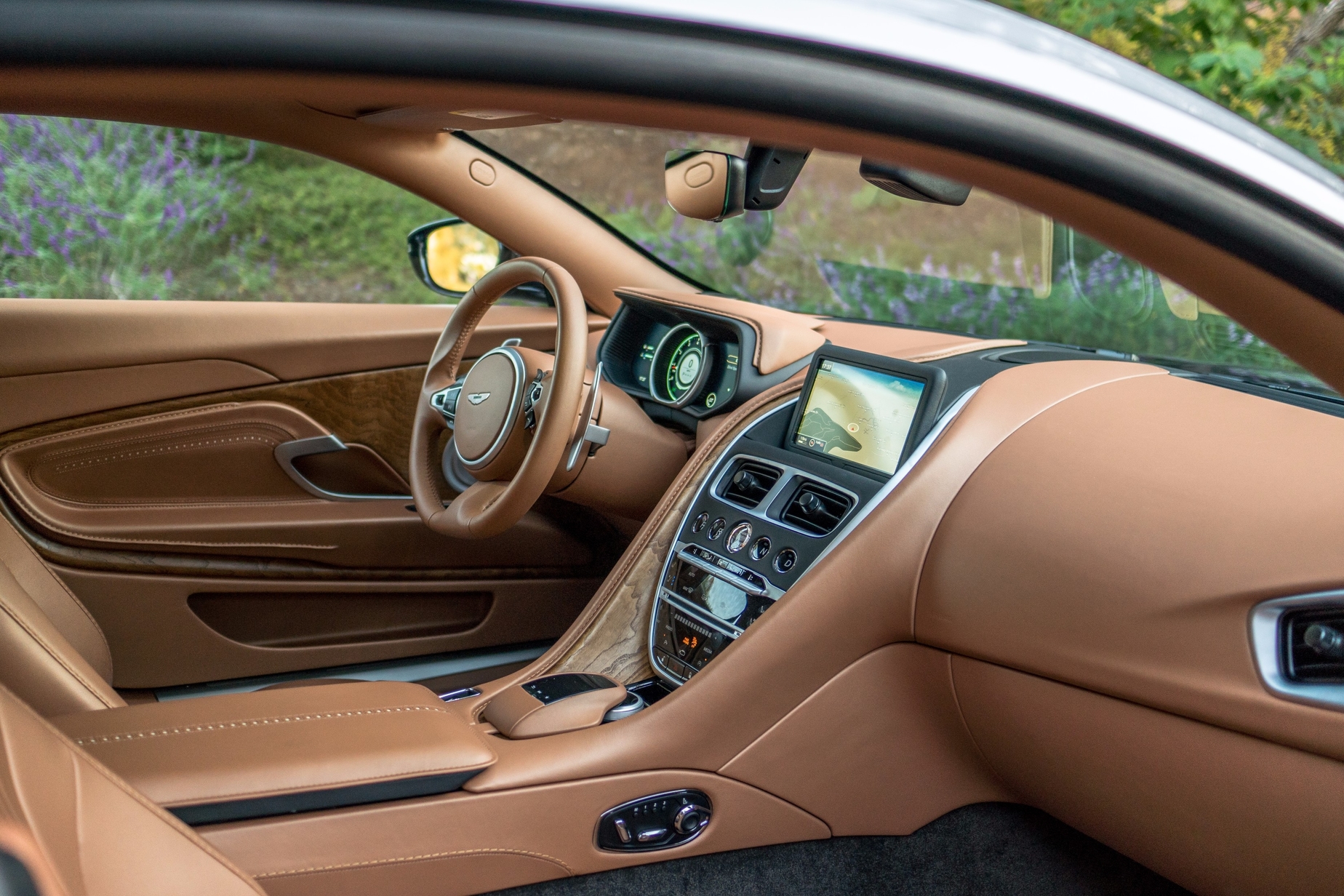 That said, make no mistake, the DB11 is resolutely a touring car, albeit fun-loving and athletic. The DB11 is about maximizing the allure of everyday driving, whether cruising along the coast or sitting in traffic.

Painted in resplendent Mariana Blue with silver roof strakes and 10-spoke diamond turned 20” forged alloy wheels, the DB11 is striking. In the metal, it’s longer than I expected, with a slinky roofline that flows effortlessly into its rear deck. Combining a floating C-Pillar and no visible spoiler, the DB11 is elegant, eye-catching, and looks every part the successor to the lovely and longstanding DB9.

The interior is also beautifully rendered in heavy tan leather, perfect contrast stitching, and open pore light ash woodwork accents on the center console and door panels. With a leather-wrapped headliner complete with broguing to match the seats, the interior is upscale, lovely to the touch, and exactly what you might expect from an Aston Martin. Most DB11s are ordered to customer specification and the options and combinations are nearly endless.

The DB11 is about maximizing the allure of everyday driving, whether cruising along the coast or sitting in traffic.

While complicated and presenting something of a learning curve, the DB11 uses a customized version Mercedes’s COMAND infotainment system, offering control of a great many features within the car. Thankfully, Aston has included a wide range of physical buttons for controlling core concerns like seat position, basic media, climate controls, and even their traditional button-select transmission. 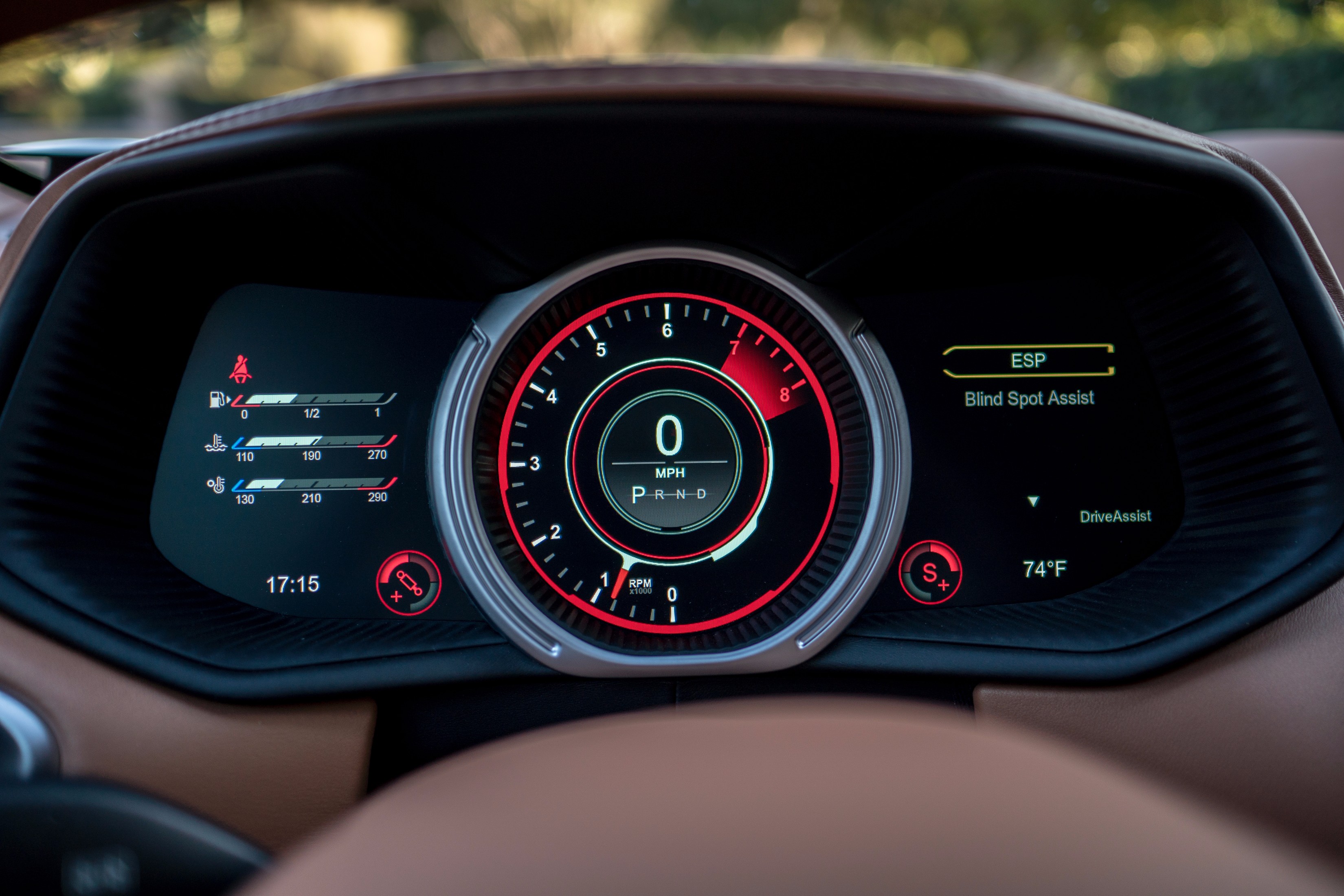 Those buttons (and the paddles behind the steering wheel) control the fast and very agreeable ZF 8-speed automatic transmission. Over the course of more than 400 kilometers, the transmission proved to be up to the task of both relaxed cruising, crawling in traffic, and blasting along a backcountry mountain road.

Perhaps the most considerable departure from Aston Martin’s usual interior aesthetic is the digital main gauge cluster, which forgoes the brands iconic clock-style opposing gauges for a bright and very high-resolution digital display. While undoubtedly strange at first, this next-generation look quickly blended with the interior, offering strong functionality and a relatively straightforward display of any crucial information.

Starting at $233,650, the DB11 is a gorgeous charmer, and while its V8 may be rock and roll to the V12’s classical symphony, one could argue that the V8 is the spec to have. As I ran free along Yaqui Pass Road out of Borrego Springs, California, the engine was keen to leave nothing on the table. With visions of the final scene of Vanishing Point in my mind, I turned up the stereo as Joan Jett sang “I Love Rock and Roll”. Me too, Joan. Me too.