The white-railed porches of eight colourful houses—facing each other in an oval pattern—encircle an open green space. Shaded under a veranda, the communal barbecue stands near a stone-set pizza oven. Steps away, an outdoor fireplace rests at the helm of a marble slab terrace and the lush, green lawn. Under the blue sky, a handful of nearby garden plots wait to be seeded.

This pocket of homes, called the Courtyard Cottages, is just one portion of a larger food-and-farming-based property development in Tsawwassen, B.C., called Southlands—and it really is where home meets hamlet. Though “community” has lost its meaning from decades of marketing jargon, here, in this picturesque shared yard, it applies.

“The community as a whole is informed by farming,” says Sean Hodgins, the president of Century Group, which is developing the Southlands plan. “But as you get down to more intimate spaces, the thing that interests me is how people come together around food—and so what we did was build this pizza oven in the common space. They also have the small-scale vegetable garden, but we expect that most people will really want to get their food from our farmers market.” 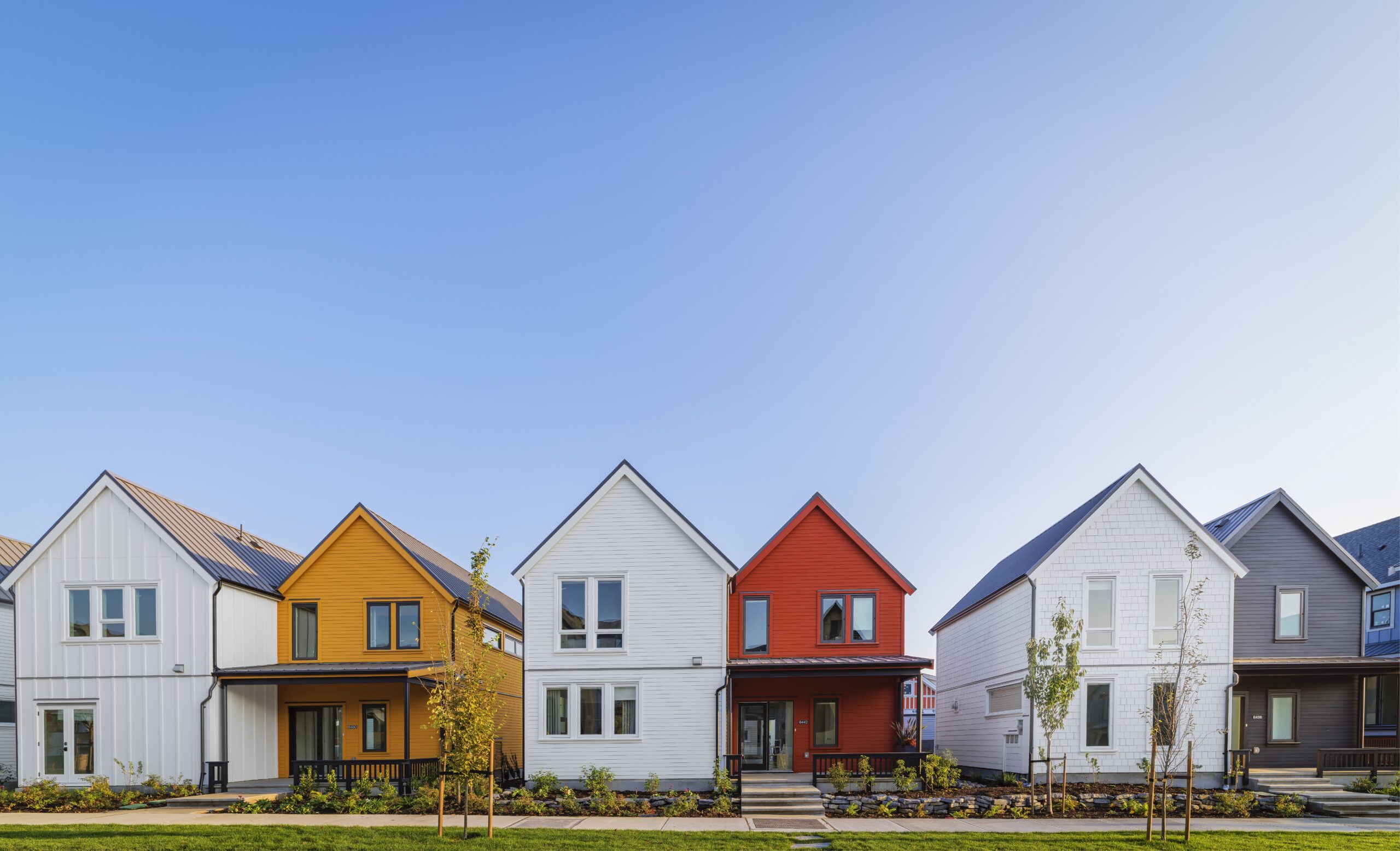 Part of the deal Century Group made with the highly contested area’s stakeholders was to maintain a commitment to the history of the land. For years, Boundary Bay in South Delta existed as dedicated agricultural land, and the community didn’t want to see it paved over. Southlands responded with a pledge of 50 acres to agricultural activity and hired the notable Seann Dory—co-founder of Vancouver’s Sole Food Street Farms and founding member of the Young Agrarians—along with his wife, Suzy Keown, as resident farmers.

“We’re also working on a mentorship program for younger farmers or people later in life,” Hodgins adds. “If they have an idea, or need some mentorship or tools, we can make land available to them—because we have 50 acres.” The organic produce from these adjoining farms will be sold at Southlands’ very own farmers market in the town square.

Leaving Courtyard Cottages, visitors stroll down the road past the neotraditional Scandinavian-style homes and Estate Cottages to the market plaza. Here, lining Market Avenue, the restored Alexander/Gunn house, the Red Barn, the Grange, and an outdoor amphitheatre envelope a gravel area that will host the farmers market for the burgeoning agri-community. 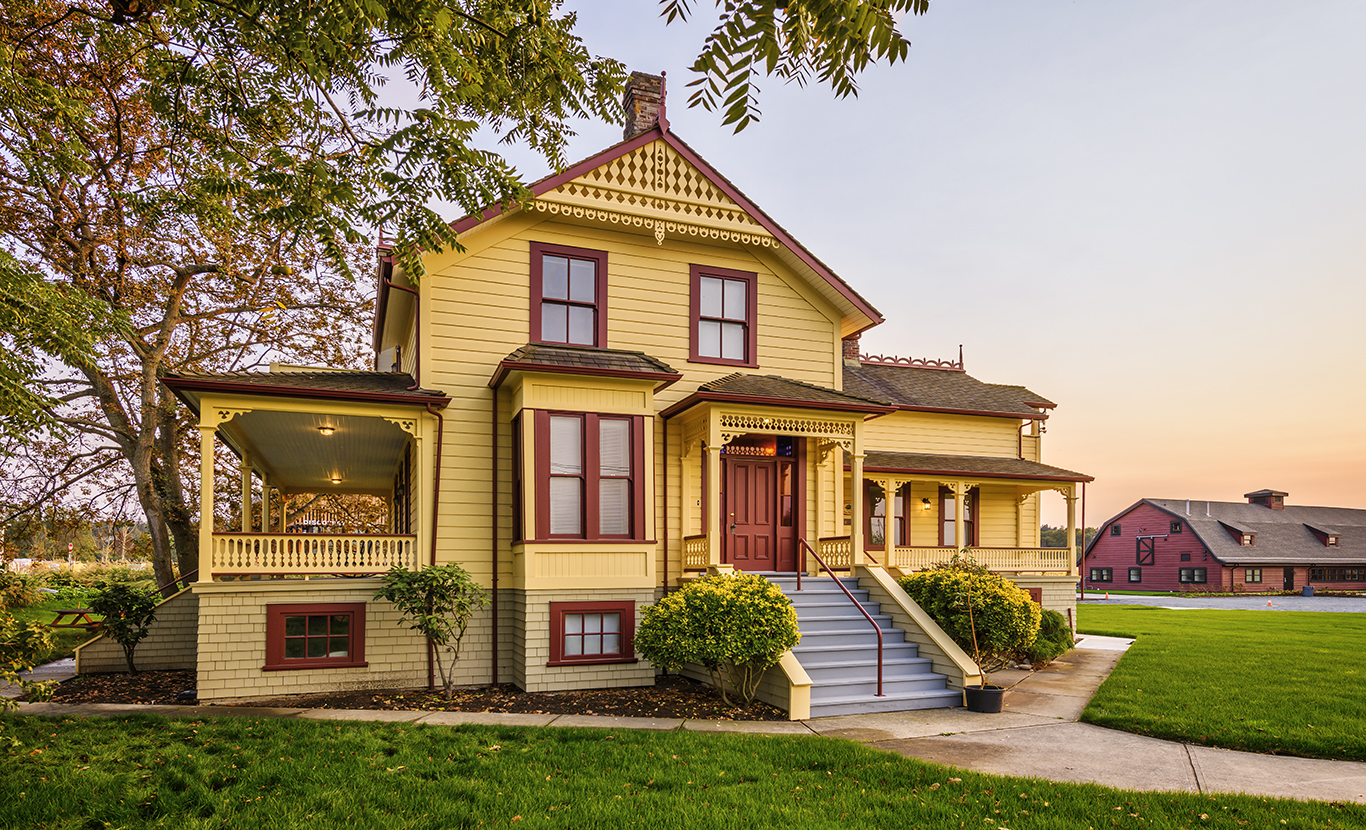 The historic Alexander/Gunn house with the Red Barn in the background.

When it’s raining, the refurbished Red Barn can host the market, but it serves primarily as a community centre, which residents and the general public will be able to book. Decades ago, Hodgins tells me, the former dairy barn burnt down and the structure remained in rough shape for about 40 years. Century Group restored it, adding lighting, installing a communal kitchen, and levelling the hayloft to create more open space.

“Not only will it be available as a catering kitchen, but it’s also a commissary kitchen. Someone can rent it for a half day, even a week if they want. It’ll be available for individual projects: making jarred or canned goods, or just to celebrate special occasions,” Hodgins explains, excited by the seemingly endless possibilities. The sustainable development practitioner elucidates a long history of the area’s structures, and why his group is committed to the preservation of South Delta’s culture. Under the day’s cloudless blue sky, he then walks me from the Red Barn to the grassy lawn of the Alexander/Gunn house, where Dory and Keown are based.

“This is the historic Alexander/Gunn house,” Hodgins declares, head stretched back to take in the majesty of the dwelling. Perched at the community’s entry, beside a tall, winding sycamore, the building serves as a focal point of the Southlands neighbourhood. It’s yellow with burgundy trim, vintage wooden windows, and a lofty farmworkers bunkhouse—and it bellows antiquity. “The reason it has two names,” Hodgins says, “is because of the two families that built it. In the 1880s, the Alexander family were some of the first to settle here, and they built the farm outpost for the summertime only. In 1914, the Gunn family purchased the property and made it their permanent home. They built the main house, which is connected, so that’s why there are two front doors.”

The Discovery Centre is the public’s introduction to real estate and lifestyle information at Southlands. Its simple Scandinavian design and exceptional craftsmanship set the standard for all Southlands structures to follow.

As we near the end of our stroll, a man waves to Hodgins, greeting him by name, and Hodgins waves back. The well-dressed developer continues talking about the importance of terminated vistas when considering urban planning and landscape architecture, then suddenly cuts himself off, noticing a resident reading in the sun. Neighbours walking their dogs and children on bikes glide past us. “Looking all the way down from market avenue, this is your prime opportunity to really make sure that your architecture is—oh, there’s another person sitting on their porch! I just love it. I know I shouldn’t be that excited, but I am,” he laughs. Hodgins has built the foundations of a community—and the people who moved here are growing it into one.