Nigella Lawson does not like being called “coquettish.” She says so, three times, rapidly and in a burnt-caramel voice: “I’m not remotely coquettish… I’m not coquettish, I’m quite intense, and I think I have an intimate style. As a person, I don’t think of myself as remotely coquettish.” In fact, little of the journalistic shorthand conventionally used to describe the 55-year-old British culinary personality suits her. She’s not a “domestic goddess,” for one; that moniker was intended to be tongue-in-cheek from the start. Petite in a pair of leggings and a plaid shirt, she’s not the Rubenesque calendar girl she’s often touted as being, either. A more accurate descriptor for Lawson may be “indomitable.” Whether she is reassuring the viewers of any of her eight home cooking shows that, no, the world will not come apart at the seams if they use canned chicken stock, or navigating the complications of her personal life in the public eye, Lawson exudes an aura of brisk forward momentum—a locomotive energy. 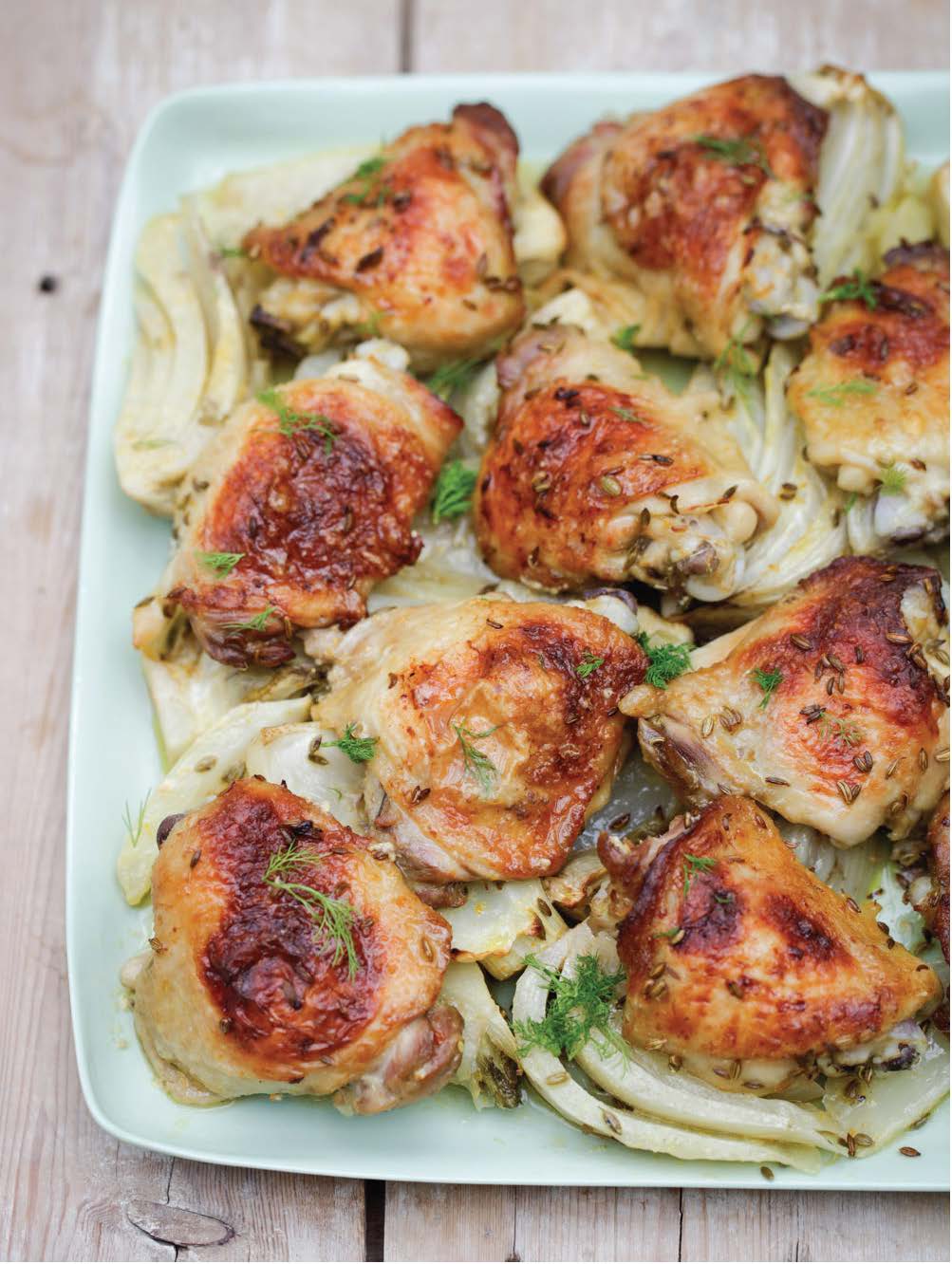 The chicken traybake with bitter orange and fennel featured in Simply Nigella that cooks with surprising ease.

Lawson’s current task at hand is promoting her tenth cookbook, Simply Nigella: Feel Good Food. Comprised of recipes she routinely cooks for herself and her family, the book is homey and personal, down to its “slightly fifties soapy green” and pink photography colour-scheme (hues that Lawson also painted her kitchen because she “didn’t want it to look too ‘good taste’”). The recipes, too, are politely voyeuristic: there is the Chicken Cosima dish Nigella made for her daughter’s 21st birthday, and the bacon-laced Pasta alla Bruno her son slaps together after late nights out (“Serves two, or one teenage boy”). There is a fennel and chicken tray-bake Lawson included after making it so frequently in her new kitchen that its smell became synonymous with “home.” (When tested, the recipe produced a platter of golden-skinned, fennel-seed-flecked meat releasing rivulets of fat and orange-mustard marinade overtop caramelized fennel bulb. Looking like the picture and smelling like heaven, it dirtied only one bowl and one cookie sheet.) 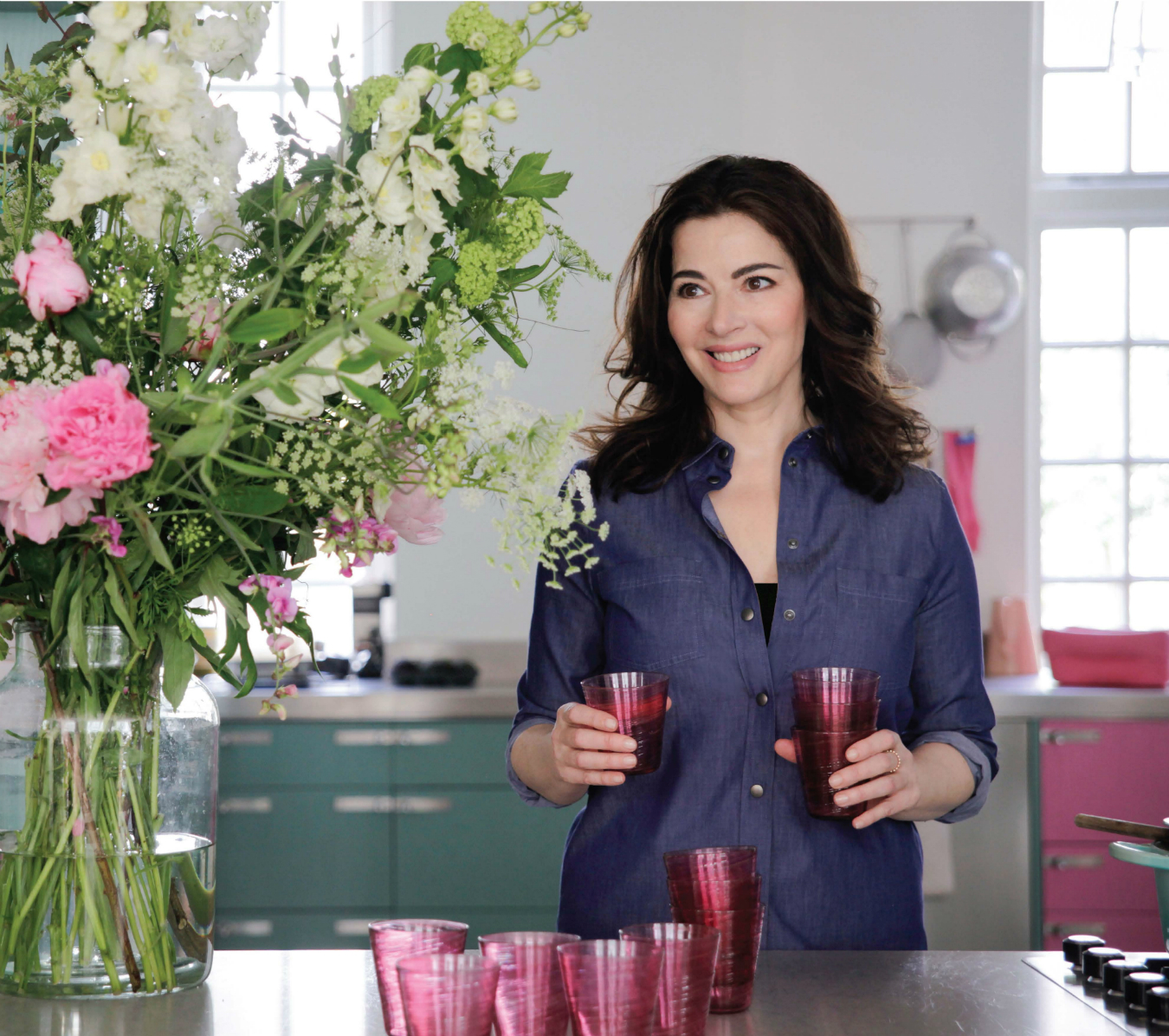 Simply Nigella‘s colour-scheme reflects that of Lawson’s home kitchen, which she painted green and pink: “I didn’t want it to look too ‘good taste,’” she says.

After all, these are straightforward dishes intended to be as soothing to cook as they are to eat, often out of a bowl, on the sofa. “There’s something quite elemental about having one’s hands around a bowl,” Lawson ruminates. “Something about knives and forks and a plate seems artificial, quite anal.” Getting fed is the point, not crafting elaborate embellishments; this is not a book for food stylists. “I think it’s very important that you try to make food so simple that it doesn’t add to the stresses of the day when you start cooking but rather helps you decompress as you putter about,” Lawson explains. However, sometimes her suggestions are humble to a fault, as in the case of Simply Nigella’s Caesar salad recipe—amounting to little more than oven-baked lettuce topped with a fried egg—which offended many of her one million Twitter followers. 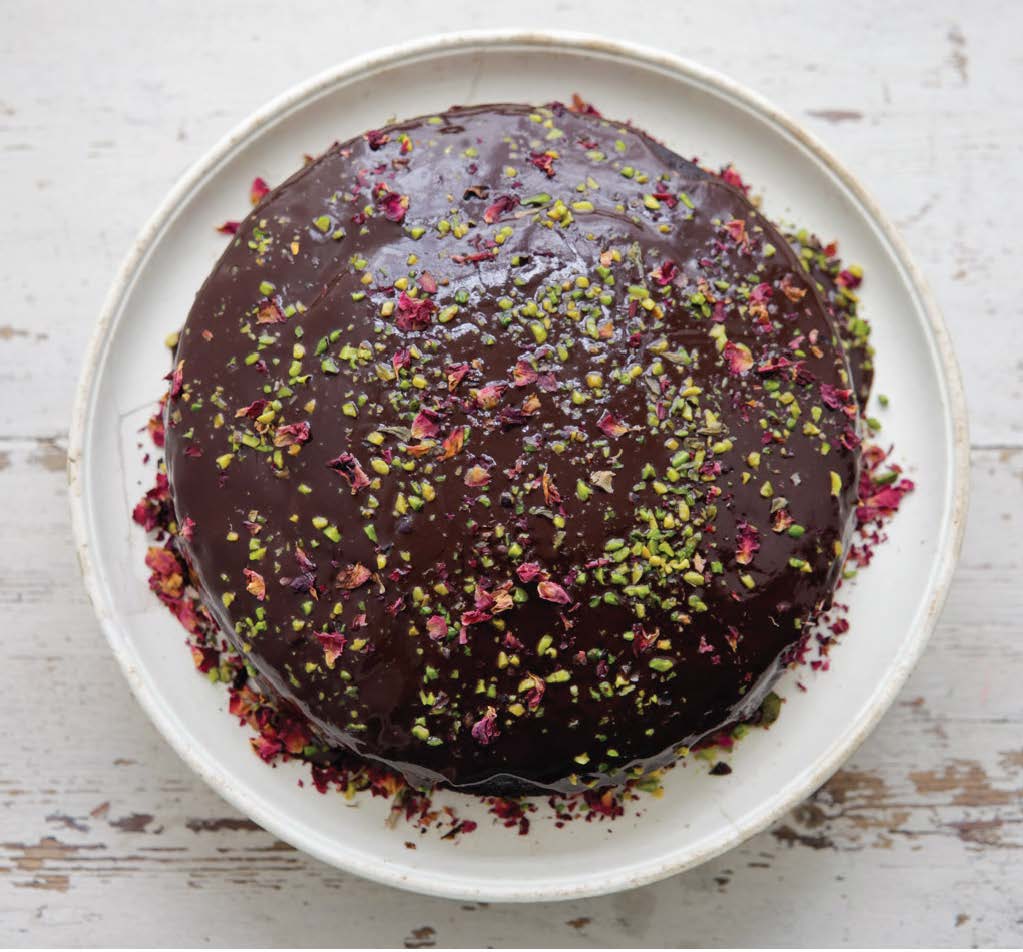 The Dark and Sumptuous (vegan) Chocolate Cake with pistachios and rose petals sprinkled over top.

But it takes a lot to shake Nigella’s confidence. “I don’t spend an awful lot of time thinking about how I’m perceived; it would clutter me too much,” she says. More interested in authenticity than hipness, she approaches food trends scrupulously, avoiding those that clash with her brusque, taste-first ethos. “I don’t like the term ‘clean-eating’ as I don’t like the implication that other kinds of eating are dirty, and I don’t like food-shaming and smuggery,” she says of the holistic, green-juicing foodie set. As for the increasingly trendy ingredient of gooseneck barnacles, which she recently sampled for the first time: “I’m not sure I’d say they had the edge on other forms of sea life.” Kimchee (which she adds to a fried-egg wrap), vegan and gluten-free baking, and ancient grains (“I do like their nubbly-nobby sort of texture”) all appear in the new cookbook, having won the Nigella Lawson seal of approval.

Simply Nigella reflects Lawson’s character: elegant yet unfussy, curious to try new things but never above a good ramekin filled with under-baked cookie dough. This is, after all, the woman who considers her spirit-food to be bread, “the foodstuff that is at the very crux of any human understanding of what it is to eat.” She has a clear vision of the version of herself Simply Nigella shares with her readers; namely, one who is pulling together a big bowlful of dinner after a busy day, then happily plonking onto the couch to eat, unwind, and relax.