Newton Vineyard in Napa Valley is well worth a visit, both for its acclaimed unfiltered wines, and for the splendour of its English gardens and mountain caves. The slow spiralling drive up the vineyard-covered hillsides begins where Madrona Avenue ends, just west of St. Helena; it mimics the corkscrew juniper topiary spires that line the winery’s gardens upon arrival. At the vineyard’s highest point atop Spring Mountain, a single pine tree, known as Pino Solo, sits on the crest of the ridge line, towering over 30 metres tall (and is featured on the Newton Vineyards logo). Other landmarks—a British telephone box, a red Chinese gate, and cedar pagoda—pay tribute to the heritage of its founders: Peter and Dr. Su Hua Newton, who opened the winery in 1977.

The Newtons were early pioneers in many ways: they opened one of the first wineries on Spring Mountain, even before Napa Valley had seen the boom of wineries and Michelin-starred restaurants it has today. The meticulous care they paid to the property above ground is just the starting point. There is an elaborate network of caves and cellars woven throughout the mountainside and beneath the grounds as well. With a reverence for nature, the Newtons designed and built the property to blend into the mountain and applied many sustainable practices still followed today. 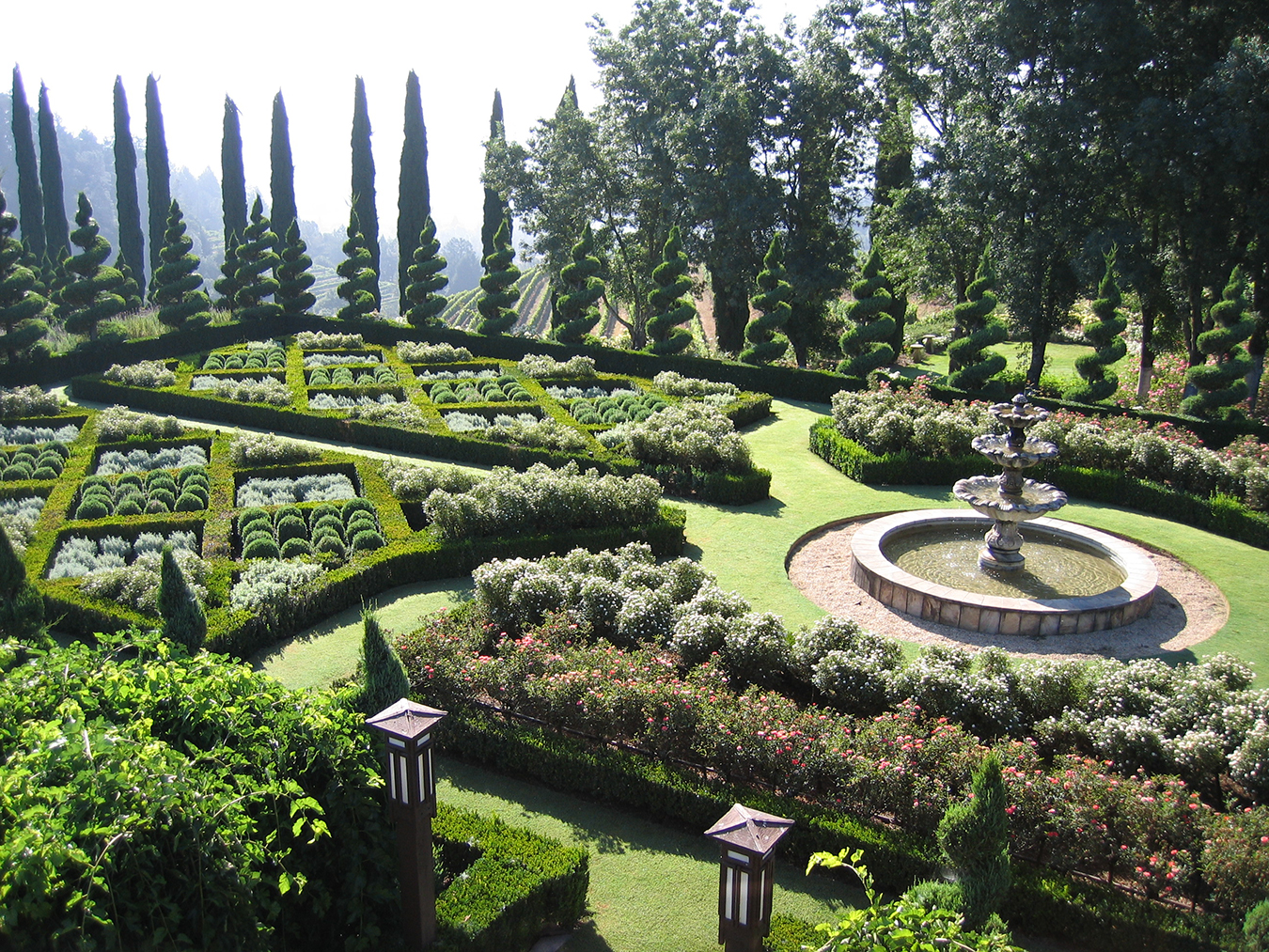 The winery features 120 acres of vineyards, planted at elevations ranging from 500 to 1,600 feet above sea level in separate parcels. Every vineyard block is treated separately, taking into account distinct sun exposures and soil types that allow for several specific varietals to thrive, including merlot, cabernet franc, cabernet sauvignon, and petit verdot. The angles of the early plantations are up to 40 degrees (new laws now restrict them to between 26 to 29 degrees). Its high elevation gives the property lower average temperatures, resulting in longer hang times and slower tannin development in the grapes, creating structure and balance. Vineyards are harvested by hand, block by block, in as many as five passes to ensure each grape cluster has reached its optimal ripeness. The winery was built to allow minimal handling of the fruit, with gravity flow systems implemented to separate batch fermenting. A room beneath the gardens allows barrels to ferment naturally in a cool environment, and underground cellars are portioned with large doors to keep each one at a different temperature, depending on the varietal.

Since its founding, Newton Vineyard has been revered for its unfiltered wines, including its chardonnays, for which it gets its grapes from its vineyards in Carneros. In fact, in 1998, President Bill Clinton and Hillary Rodham Clinton served a 1995 Newton Vineyard chardonnay at a White House dinner honouring Prime Minister Tony Blair of Britain.

Keeping the wines unfiltered preserves the integrity and natural essence of the fruit, resulting in unique aromas and flavours. With this method, much like French press coffee, the raw material is still intact, steeped in the liquid. The wine is decanted to separate the solids, which naturally settle to the bottom of the barrel, before the clean wine is decanted again off the top and placed in the bottle without filtration.

The Unfiltered Chardonnay is 100 per cent barrel-fermented using indigenous yeasts, and aged for a total of 15 months in French oak barrels, 30 per cent of which are new. Every barrel is hand-stirred weekly during maturation to re-suspend the sediment, before being blended and bottled unfiltered. The resulting 2012 vintage has a creamy texture with notes of stone fruit, pear, and roasted almonds, and aromas of apricot and grapefruit, with a subtle spice. The 2012 Unfiltered Merlot is another standout vintage, with strong black fruit flavours and hints of mocha, toasted cedar, and coffee.

The founders have passed the legacy on—Peter passed away in 2008 at the age of 81, and Australian Rob Mann has taken over the winemaking—but the foundation has been laid. The winery offers tours, followed by a tasting of the Newton Vineyard portfolio. Visitors to the estate may find a new appreciation for the years and time it takes to develop such a well-run establishment. And on the top of the hillside, next to Pino Solo, glasses are raised to a job well done.

The Wonders of Pink Wine