“Family” is an evocative word in the world of wine. It’s embraced by wineries such as Meyer Family Vineyards and Fitzpatrick Family Vineyards. Some wineries highlight their generational depth, like California’s Gallo winery where Gina Gallo is a third-generation winemaker. Twelve of Europe’s most prestigious family-owned producers have joined together to promote themselves as Primum Familiae Vini (Leading Wine Families), while a similar dozen in Australia is called Australia’s First Families of Wine.

“Family” is not only evocative. It’s ubiquitous.

The top tier of wines produced by Ontario’s Henry of Pelham winery is Speck Family Reserve, and the concept of family is core to the enterprise. The name of the winery refers to Henry Smith, the great-great grandfather of Paul, Matthew, and Daniel, the Speck brothers who now own it. Henry inherited the land, in the Pelham district of Niagara Peninsula where the winery stands, from his father, who had been granted it in 1794 for fighting for the British against the Americans in their War of Independence. In the 1840s, Henry built an inn, tavern, and carriage house and signed some documents—in an aristocratic sort of way—Henry of Pelham.

The land stayed in the family for more than a century, and in 1982 the parents of the Speck brothers bought several parcels of it from a cousin, including the 1840s buildings that are now part of the winery. The land also includes the early family cemetery, where Henry Smith and his wife, Catharine, are buried.

At the time Paul Speck Sr. bought the land, he owned a private school in Toronto, but he envisaged planting vineyards and making wine. Starting in 1984, he and his sons, then aged 10, 14, and 17, set to work, preparing the ground and shovel-planting the (mostly hybrid) vines. They produced their first vintage in 1988, and when their father died suddenly in 1993, the three brothers became the owners.

The rest, as they say, is history, but that does little justice to the work and dedication involved in creating one of Niagara’s leading wineries. This was not one of today’s destination wineries, backed by millions of dollars of investment. Henry of Pelham has grown and prospered thanks to hard work and smart planning—and very good wines, right from the start. 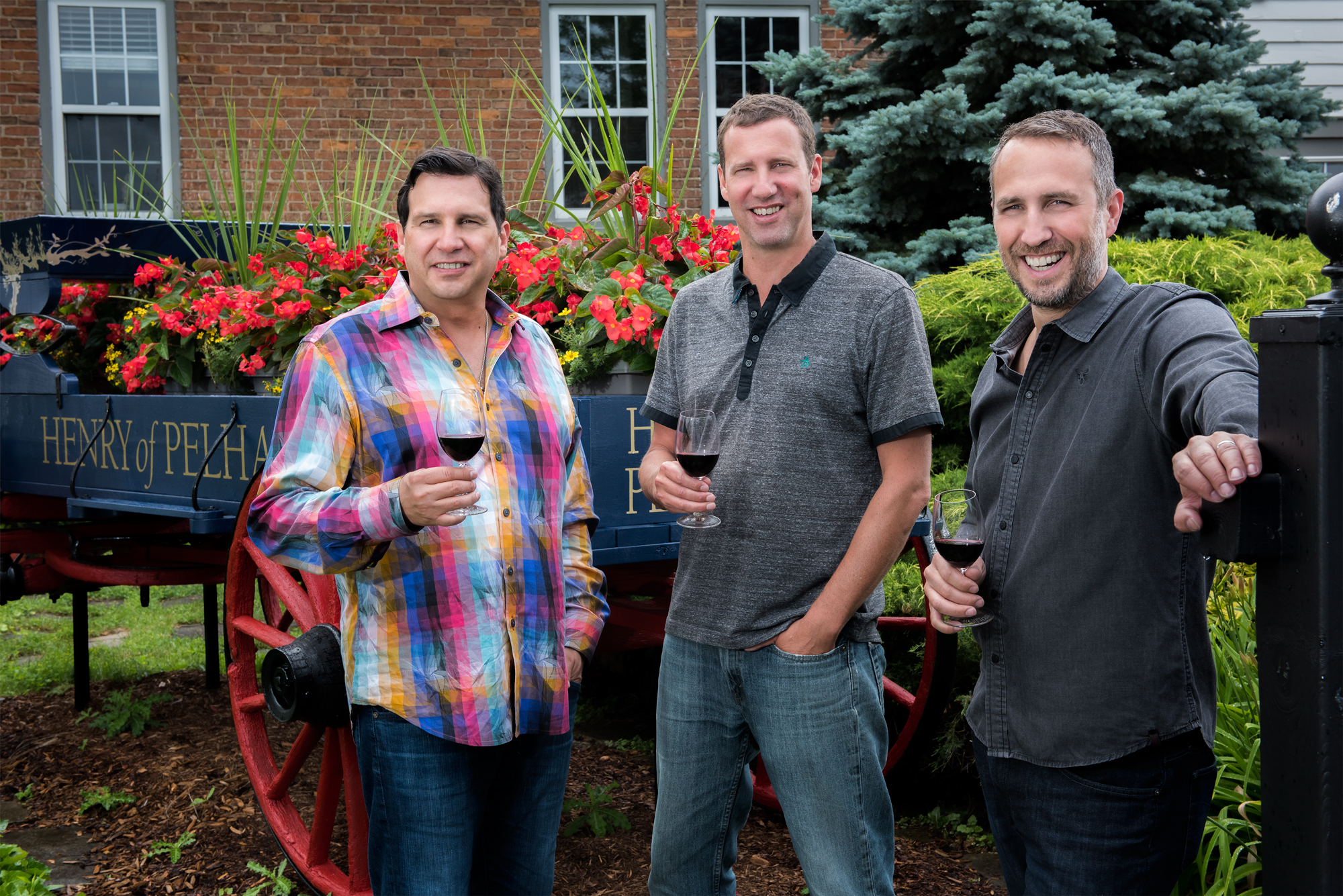 There’s now a broad portfolio: red, white, and rosé; still and sparkling; dry and sweet. But like all wineries, it has particular strengths. One is the Cuvée Catharine line of sparkling wines (named for Henry’s wife), which are fresh, lively, dry, and deliver plenty of bubble activity in your glass. A standout is Carte Blanche, a blanc de blancs made from chardonnay and aged 60 months before being disgorged. The current vintage is 2014.

Henry of Pelham also pioneered the making of quality wines from the baco noir variety, a hybrid developed in France in the early 1900s. Hybrid varieties are generally considered inferior to vinifera varieties, but Henry of Pelham’s baco noir has become a cult wine. Daniel Speck describes baco noir as an outlier, with its inky colour, juicy texture, and flavours that are smoky and sometimes reminiscent of beetroot. It’s a quirky grape, he says, and they had to learn to “tame the wild flavours.” Baco noir is a hit in Canada and sells well in northern Europe and the U.S.

Not that Henry of Pelham is a slouch with mainstream red varieties, such as pinot noir, cabernet sauvignon, cabernet franc, and merlot. When in 2001 the famous English wine writer Jancis Robinson poured the 1998 Henry of Pelham Cabernet-Merlot for a French winemaker—she poured it blind, of course—she reported that he thought it was a very good Bordeaux wine. The quality continues into more recent vintages, such as the Speck Family Reserve Cabernet-Merlot 2016.

Henry of Pelham wines come in several tiers. Speck Family Reserve wines are barrel selections, often from the oldest vines and from single vineyards in the Short Hills Bench sub-appellation of Niagara Peninsula, where the winery is located. Estate wines are primarily drawn from the winery’s 300 acres of wines. The Classic selection is sourced from wider afield in Niagara Peninsula. All these wines, Daniel Speck says, are made in an “old world style.” Other brands, such as Family Tree and Sibling Rivalry—the family theme, again—are made in a less-structured and fruitier “new world” style—like the luscious Family Tree The Goat Lady Chardonnay. There’s a family story behind the goat lady, but you have to ask one of the brothers.

Henry of Pelham wines to look for