In so many ways, Maria Qamar has changed the direction, the mark, of what success looks like for kids like us. By us, I mean the South Asian diaspora, an abstract global group hungry for reflection. Perhaps that’s one of the reasons Qamar’s work has been so lauded; there’s a distinction to what she does, an impact that’s felt and unfettered. With her consistent artistic fortitude, she’s shifted the immense possibilities that future generations of young South Asian kids can attain by creating an archive (an entirely new vernacular) for what that can be.

Consuming her work over the years, I’ve noticed it’s less about achievement, about the capitalistic gaze of consumption, than it is about pushing boundaries. Sure, she’s lined restaurants with her art, even made appearances on The Mindy Project, and she’s friends with comedian Hasan Minhaj, dashing the dreams of many a brown teen, but fame doesn’t seem to be the objective. Instead, she questions standards of being, the oft-cited “rules of our culture” (code for conservatism), something that I find so fascinating and, frankly, charming about Qamar. She has resisted labels and created art that is cross-genre, Bollywood meets Roy Lichtenstein, pop art as pulpy as a Bengali melodrama. She’s done it on her own terms, without the restricting parameters that concern so many of our parents. Her artistic resolve makes me think of one of her pieces, red lips, strong brows, and a delicate tulip bindi: “If I can’t be a good beti [girl] then I must be a good artist.”

As a person, behind the artist, the 29-year-old has a quiet resilience. Her openness, and the lack of affect—that sticky, uptight sneer that most artists of a certain milieu display—makes her an appealing candidate for success. But what is success during a pandemic? It is a strange time for all of us, as well as a time of recentring and refocusing priorities. When I ask about her last few months, she talks to me about romance: “I downloaded Hinge, and I’ve been spoiled with the options.” A Pisces, she tells me about her parents’ love story and how it’s potentially forever shifted the direction of her heart. “I’m always in search for some good romance in my life. It’s my fault; it’s my flaw. If it’s not stupidly romantic, I don’t want it in my life.” Later she adds, “It’s actually not my fault, it’s my parents’ fault, so we can blame them for that.” 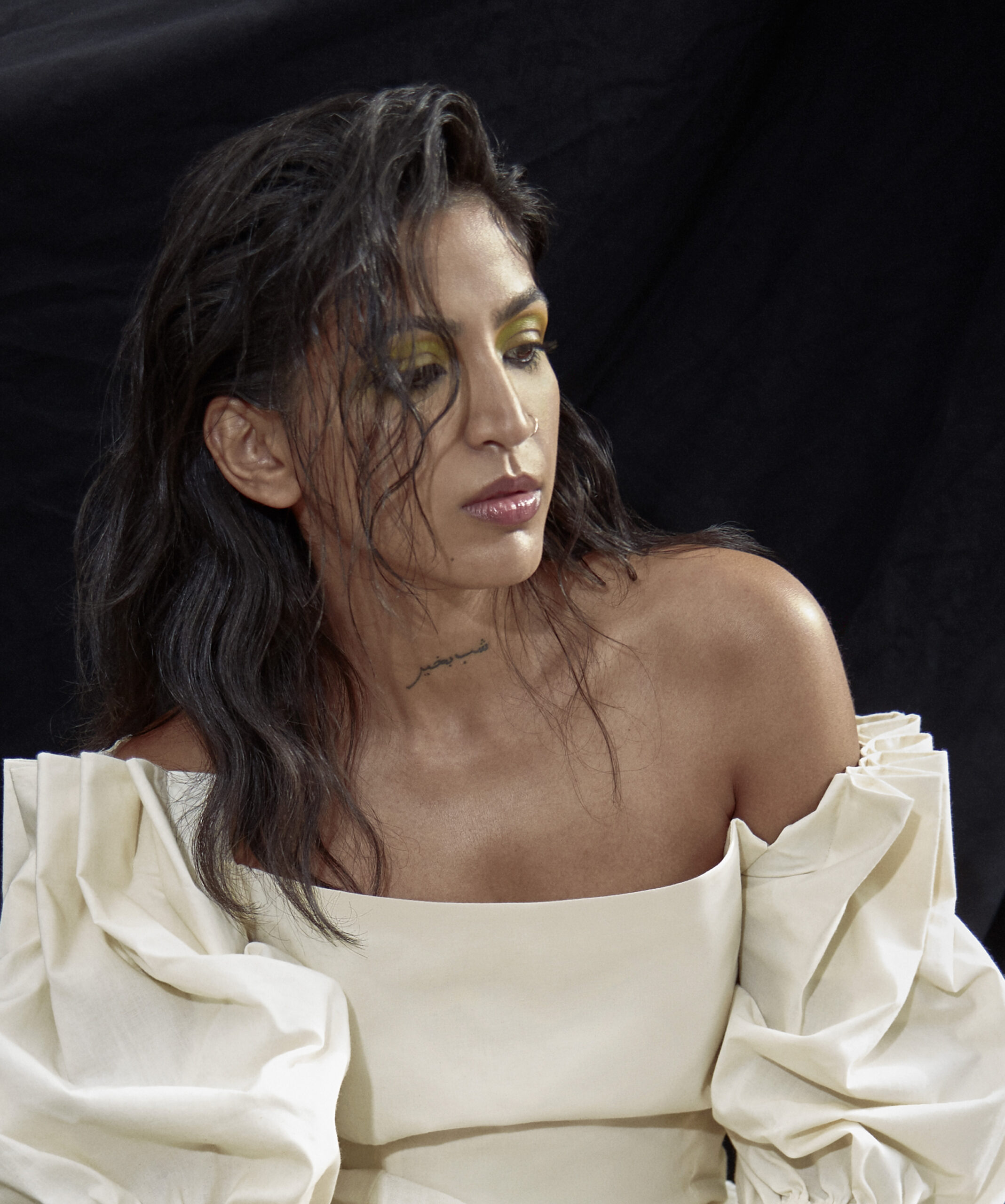 I am intrigued (don’t we all love a good romance story?), and she indulges me. “Basically they eloped together because they weren’t allowed to get married. So they married on their own terms, and it’s funny how they met because it was very passionate. It was very romantic.” Her father, a Bangladeshi, was a big personality and handsome, and her mother, a Gujarati, was shy, quiet, and cute. They both worked as scientists in Pakistan, where Qamar was born and raised, and immigrated to Canada in the early 2000s, first to Scarborough, later to Mississauga. Drawing, initially a catharsis for her experience feeling out of place as a South Asian immigrant, became a lifetime pursuit after she was fired from a corporate job as a copywriter—hence her Instagram handle @hatecopy. 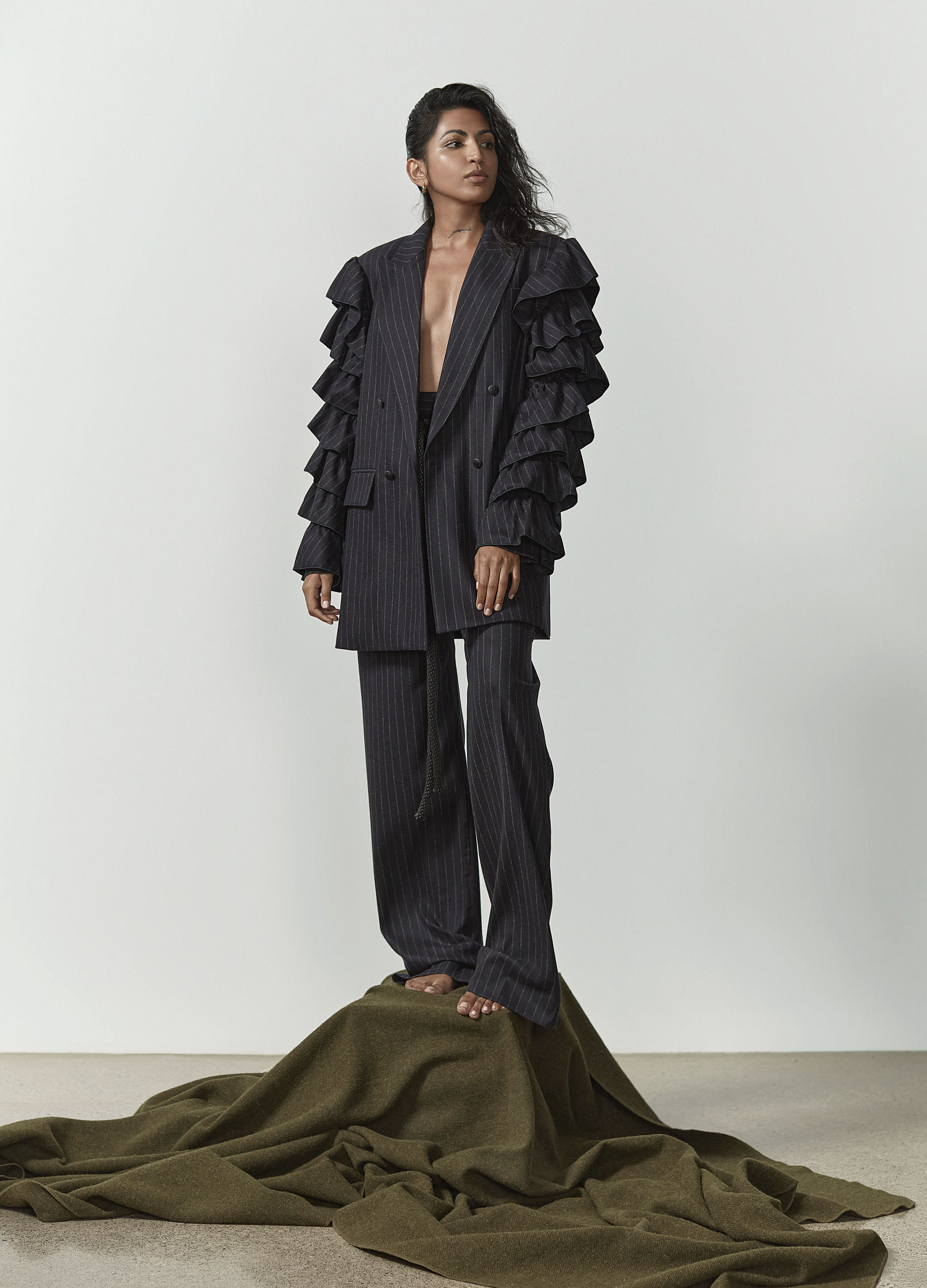 Hearing about her parents gave me a deeper understanding about these layers of Qamar. I have a better, and perhaps more dynamic, perspective of her art and why she creates the portrayals of women that she does—women who have a voice, ones who believe in love. She tells me that when she was young, something clicked: “All the things I like about myself can’t be wrong.” So began her own tempo, her own rules. Romantic, but also uncompromising, there’s an unwillingness to conform by both her muses and herself. Despite the infamous sense of constant surveillance and judgement from others—the ubiquitous “What will people say?” echoes across many South Asian households—the forthrightness of Qamar’s work and being is palpable and is necessary to recognize.

There’s a distinction to what Maria Qamar does, an impact that’s felt and unfettered. With her consistent artistic fortitude, she’s shifted the possibilities that future generations of young South Asian kids can attain by creating an archive for what that can be.

It’s a desire to explore and seek her own limitations, to see what works and what fails. Perhaps this comes from the strength of her parents’ love; maybe it comes from being tired of hearing no. Unfortunately, many young women (especially in South Asian cultures) aren’t afforded that kind of flexibility. But, in a column for Flare last year, Qamar wrote, “You were raised by risk takers; your best bet for success is to learn how they did it.” She’s asking us to bite the bullet and become the seer. 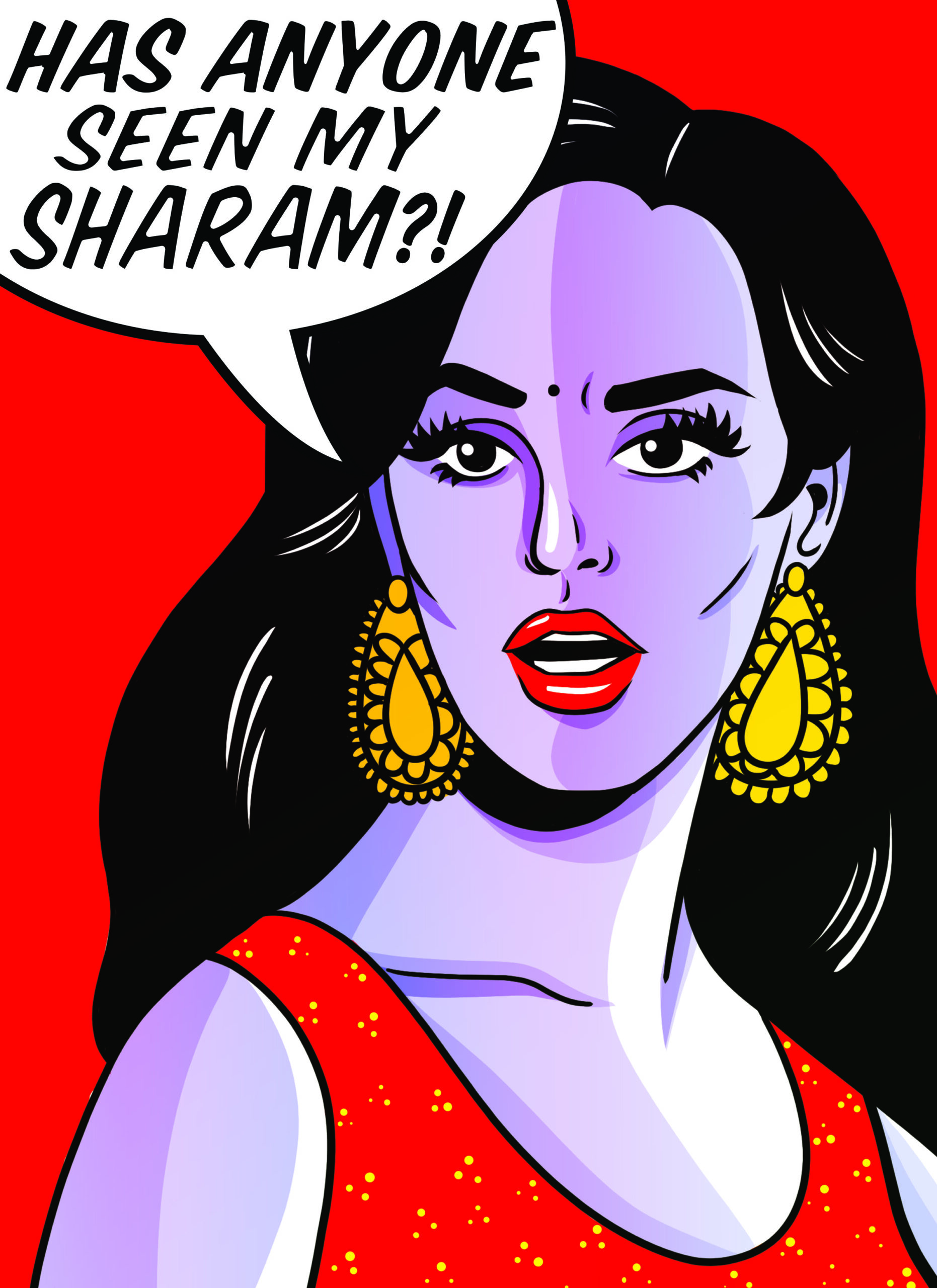 I hate the tokenizing label “Instagram famous,” as if Vogue, the Met (Metropolitan Museum of Art), and other trend-setting apparatuses aren’t all the same. Instagram or the Kardashians, if people like you, they like you. It’s an invisible market that relies on demand, but I’ve often seen Qamar’s work labelled this way. In her 2019 exhibition, entitled Fraaaandship! at the Richard Taittinger Gallery (her first solo gallery exhibit) in New York, she became the youngest artist to exhibit there—and, it was noted, also the first from an Instagram background. It’s well known that many white artists who exhibit in gallery spaces come from money, prestige (and lest we forget, nepotism) and thus receive certain allowances and opportunities to pursue art. We know these spaces are inherently white, and guarded by gatekeepers, so why fault social media? Instagram—and the internet—has become a way for Black, brown, and Indigenous folks to create their own platforms, to be heard—now in places like international art galleries, where they otherwise perhaps wouldn’t have gained the same entrance. Ironically, despite its many terrors, the internet might be one of the last bastions of democracy.

Qamar challenges these ideas, however, by being. She’s an artist through and through as all her work is handpainted, but now for Instagram, for circulation, she exists in a digital landscape. A sign of a great innovator is how they adapt. Moving on to a new world, we’re all traversing time and space. What’s beyond a pandemic? Who’s to know? For Qamar, she’s focusing on her healing. She’s getting closer with her friends, closer with her family, and the introspection has led to a deeper question: “I’m finally asking, who am I and what am I about?” she tells me. “Has anyone seen my sharam?” rings in my ears, and I chuckle to myself. Sharam means shame in Urdu and Bangla. I know one thing is for sure, wherever this reflection takes Qamar, it’s going to be a very exhilarating, and oddly reflective, ride.

Stylist Nariman J. Hair by Kirsten Klontz and makeup by Simone Otis, both for P1M.