Before each workday begins, chef Masayoshi Baba takes reverent pause at the kamidana perched above the open kitchen of his eponymous restaurant. He changes the water, sake, rice, salt, and evergreen branches offered at the small Shinto shrine, setting his daily intentions by giving thanks and praying for a happy and productive day ahead. This meditative stillness carries over to the way Baba prepares nigirizushi, one omakase course at a time. He meticulously slices each piece of fish and scores the top. He scoops exactly the right amount of shari (seasoned sushi rice) out of the large wooden hangiri with his fingers and shapes it with a few swift, efficient movements. A light brushing of housemade soy sauce is the final flourish before he serves each piece to diners seated at the sushi counter. Itadakimasu—we humbly receive.

Falling in love with hamachi (yellowtail) sashimi was one of Baba’s earliest boyhood food memories growing up in Fukuoka, Japan. His relationship with eating differed from most children’s; as a competitive judo practitioner from age six to 18, he had to pack away huge portions each day, but his natural affinity for food and cooking soon superseded the former as fuel. As a teenager, he pored through books on food and was glued to television cooking shows. He was especially hooked on the original Japanese Iron Chef series; Masaharu Morimoto was his hands-down favourite, and he was particularly fascinated that Morimoto had carved out a much-feted career as a Japanese chef in the United States.

Baba’s burgeoning love for food eventually translated into culinary aspirations of his own. Despite having zero restaurant experience, he moved to Shūnan and cut his teeth with part-time shifts at an izakaya. His gut instinct told him that something about the industry really excited him, and his boss encouraged him to pursue culinary training more seriously. Over the next seven years, the young novice continued his apprenticeship and expanded his skill set at different types of restaurants in Yamaguchi and Fukuoka prefectures, even learning the highly prized art of preparing poisonous fugu as an expensive delicacy. 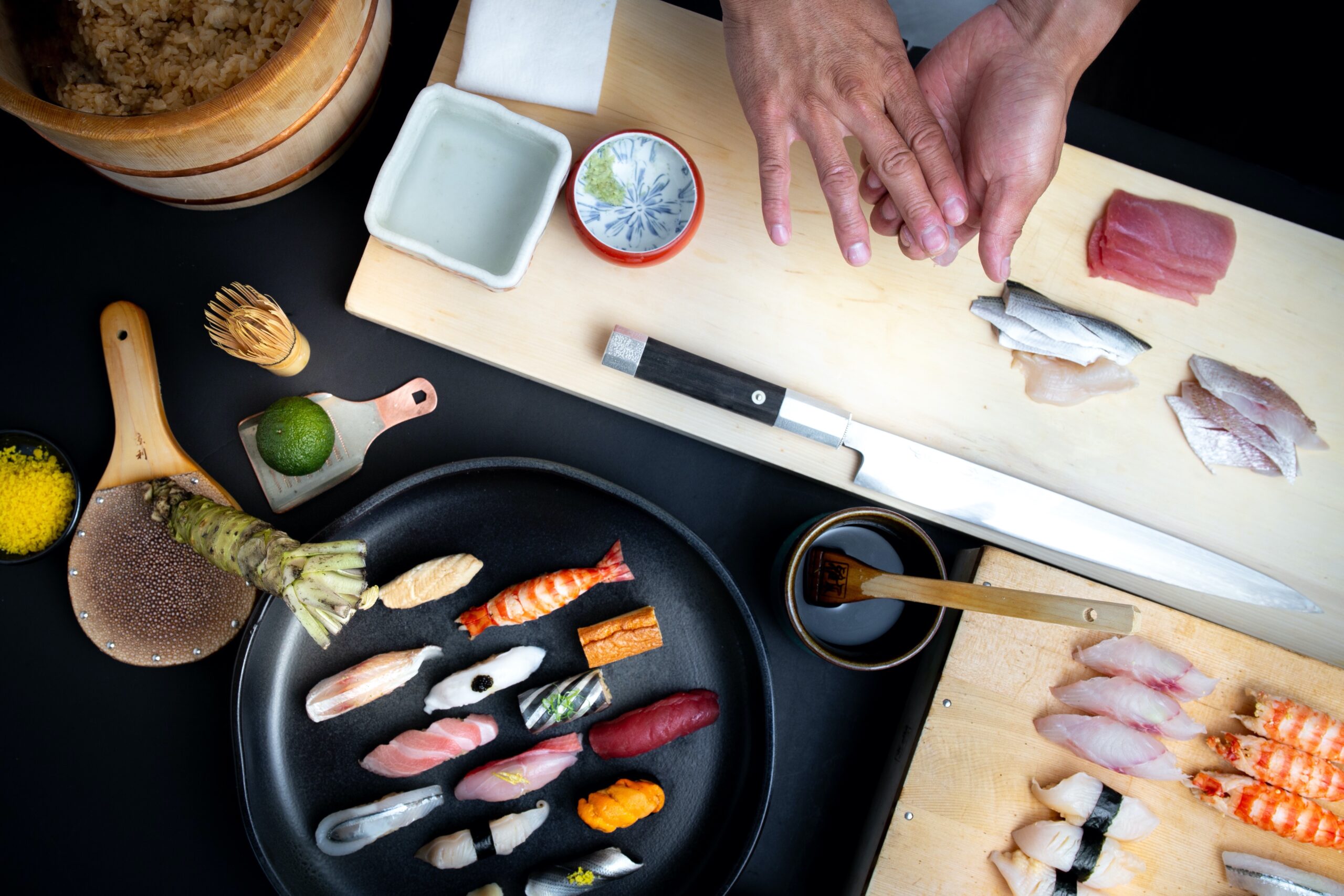 Simultaneously plain yet sophisticated, washoku—traditional Japanese cuisine—pays homage to the natural flavours of seasonal ingredients by spotlighting their nuances while harmoniously balancing them in a dish. “Japanese cuisine is very simple, very delicate,” Baba explains through an interpreter. “Young cooks must perform the same techniques over and over to ensure consistency. Very simple things are the toughest things to learn. Repetition is the most difficult part of learning.”

At 25, Baba was eager for a new challenge and a change of pace. When he was a kid, his father’s work moved the family to Los Angeles, Singapore, and back again to Japan, he says. “Back then, I didn’t know what Vancouver or Canada was like, [but] I knew I wanted to live somewhere with a more relaxing, laidback lifestyle.” A happenstance conversation with a former Torontonian piqued his interest in moving to Canada, and on New Year’s Day 2006, he took a momentous step toward seeking his culinary fortune. Kamloops was his first stop, where he worked a four-month stint at Sanbiki before moving to Vancouver. He wanted to immerse himself in studying the craft of Japanese cuisine and applied to work in chef Hidekazu Tojo’s kitchen.

Baba spent a decade under Tojo’s mentorship. From Tojo-san’s deep understanding of Vancouver’s local bounty, he learned to appreciate ingredients of place and how to create a unique confluence of flavour by seamlessly marrying them with Japanese ingredients and cooking techniques. “[Tojo] always believed in originality but never compromised the purity of his dishes … no MSG, no dyes, and no farmed fish,” Baba reflects. Over the years, his relationship with Tojo-san evolved from protege and shokunin into close friendship, and the biggest lessons he learned extended beyond the kitchen. “Most of all, the way he loves Canada, how he enjoys his daily life, and how he values quality of life taught me a lot.”

The idea of opening his own restaurant gradually began to take shape. Inspired by his time at Tojo’s, Baba was determined to incorporate an open kitchen and sushi-counter service. “When diners have a front-row view of what the chef is doing, they can see the creativity that goes into his dishes. There’s lots of energy and vibrancy that a restaurant can draw from an open kitchen.” It took two or three years before he finally made the leap, and in August 2015 he established 24-seat Masayoshi in Vancouver’s Fraserhood area. 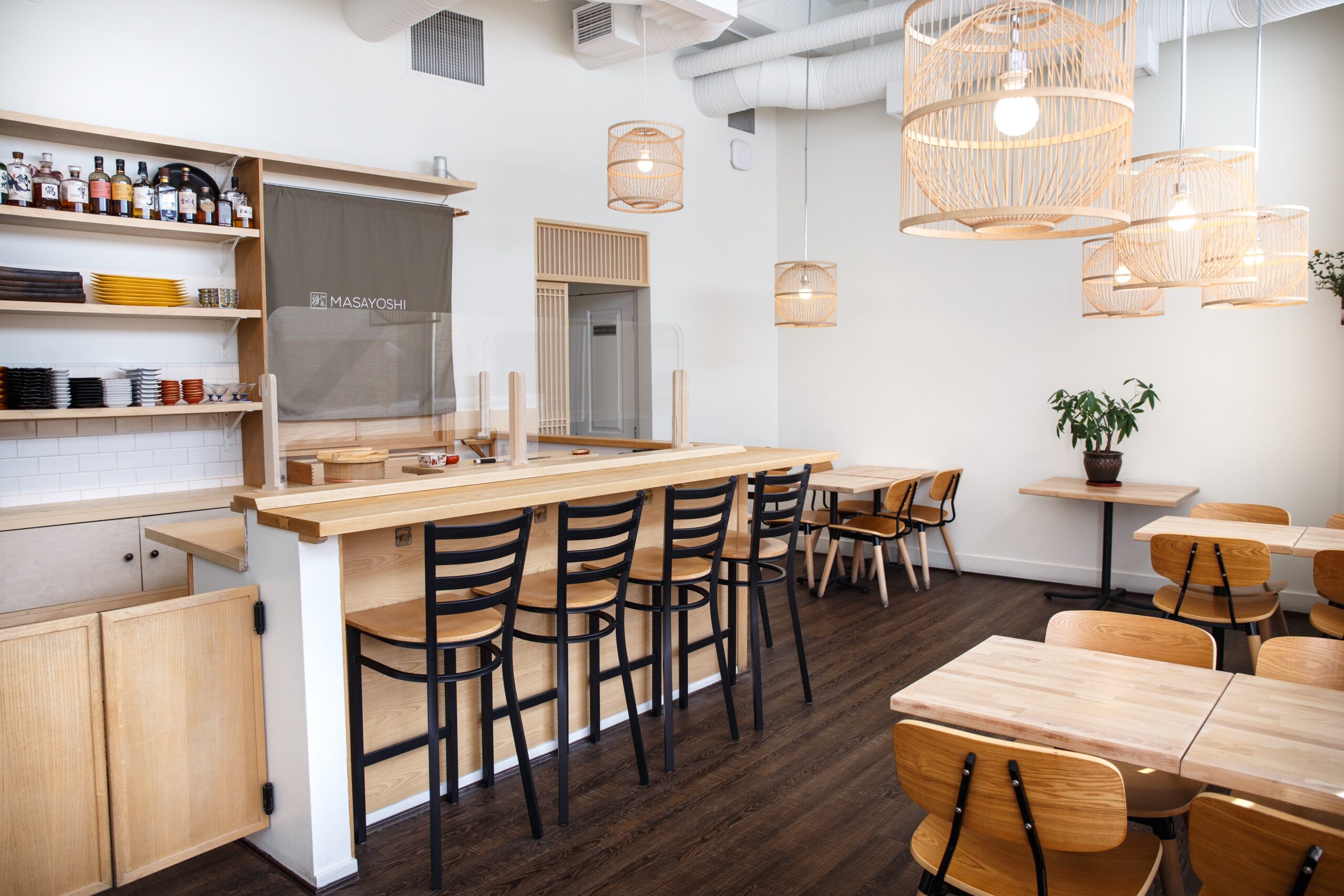 Not all was smooth sailing in his early days as a restaurateur. Baba juggled preparing à la carte offerings and takeout orders, geared toward attracting guests from the surrounding neighbourhood, alongside a three-course omakase menu—particularly problematic due to his two-person cooking crew and tight kitchen footprint. He had always intended to feature nigiri­zushi exclusively, but five years ago only a couple of other restaurants in Vancouver were offering this authentic menu format, he recalls. He had to get over the initial learning curve with diners and “teach people how to eat nigiri­zushi, use fingers not chopsticks, eat in one bite only, not drowning in soy sauce.”

By March 2017, Baba had shifted to focus singularly on the intimacy of omakase service, and his creativity blossomed. Literally translated as “I leave it up to you,” omakase is an adventurous way to eat. It’s a diner’s ultimate expression of trust in the chef, leaving the shape of a meal entirely in his hands. “I want people to be excited about trying something new, or seasonal and unfamiliar ingredients,” says Baba. “I do everything in front of my customers so they can see exactly how [dishes are] put together. And I encourage people to experiment with tasting new things by preparing them beautifully or uniquely so it helps them not be apprehensive.” His show-stopping presentation of osuimono in a syphon pot highlighted both the process of creation and delicate clarity of the broth. And his one-gulp shooter of baby anago (saltwater eel)—head, tail, and all—with quail egg, green onion, and rice-vinegar marinade delighted even the most tentative eaters with its flavours. 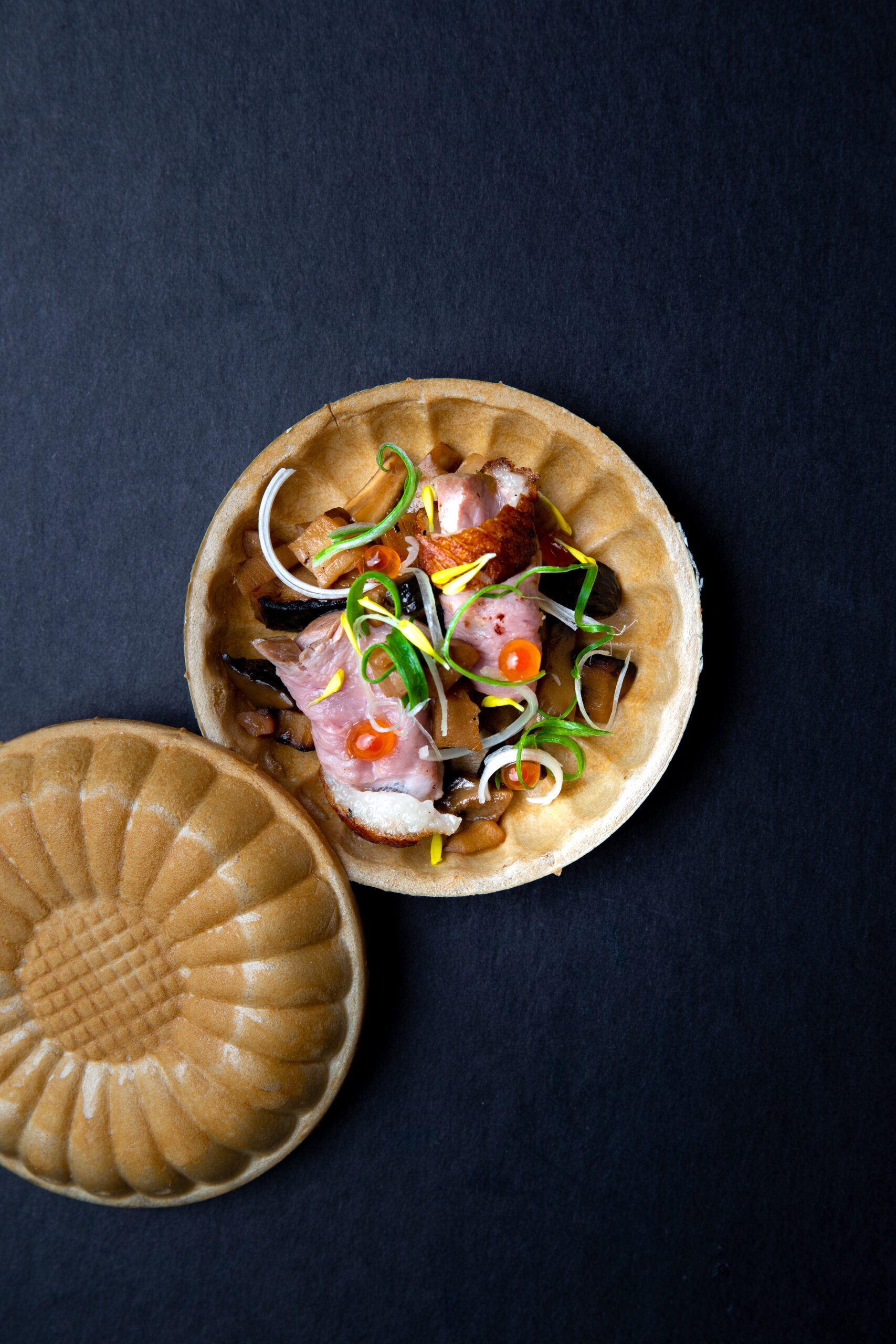 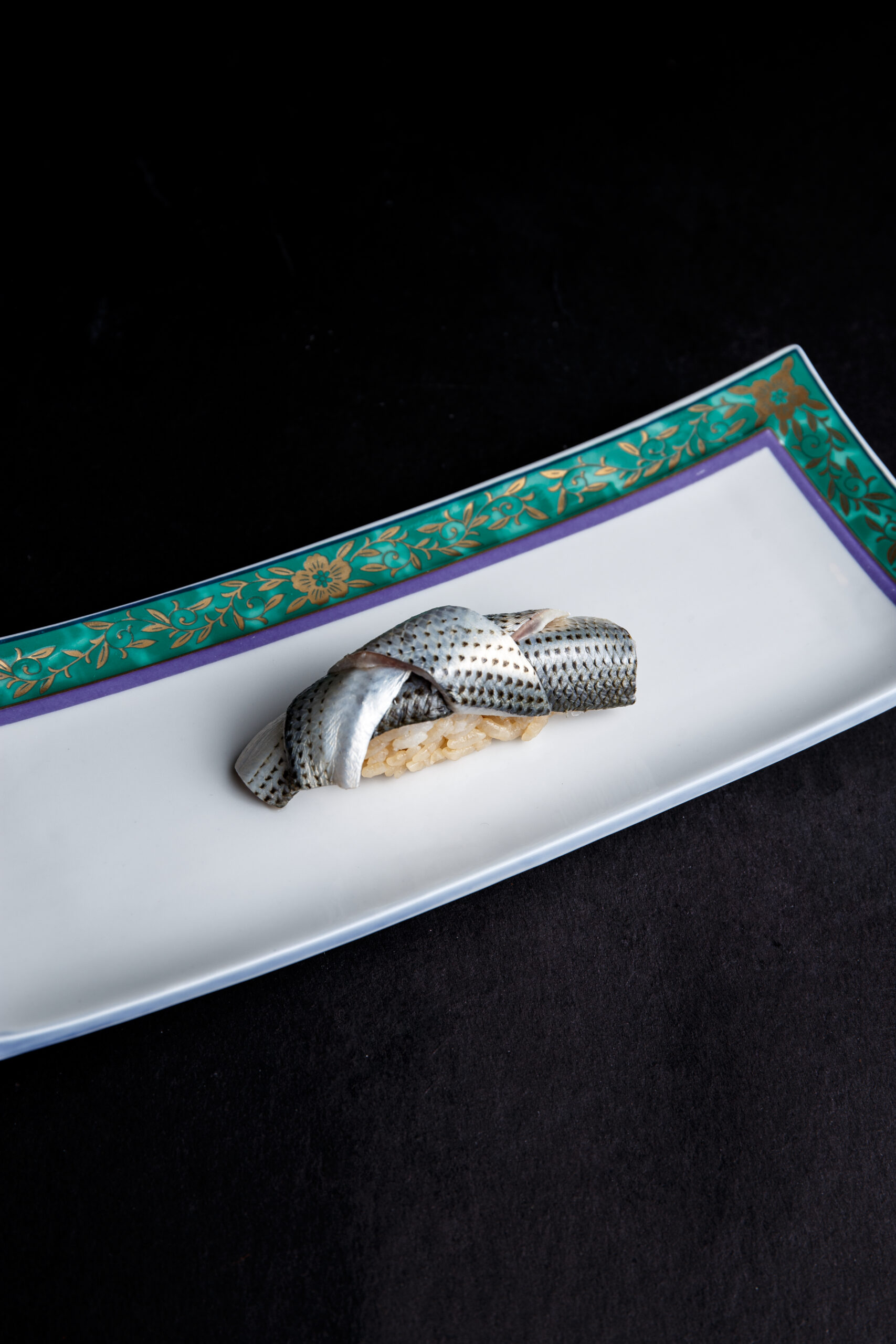 As the ultimate measure of respect for his ingredients, Baba fulfilled his original plan of transitioning Masayoshi’s menu to nigirizushi: 16 pieces along with appetizer, miso soup, and dessert. It is the clearest expression of his culinary vision, steeped in tradition and distilled to its purest essence. Imbued with Baba’s dedication to teaching diners about the intricacy and elegance of making nigirizushi, his omakase service exemplifies the concept of omotenashi, selfless and heartfelt Japanese hospitality. Most important to him, though, is the overall impression of a meal. “I want people to experience something they can only experience, see, and taste here. If that makes them happy when they leave, that would be the best.” Gochisousama deshita, Masa-san—thank you, indeed, for the delicious feast. It is we who are honoured.