During hard intervals, through winter and disease, our homes feel like places that can ferry us through time itself, sailing into smoother waters. They are well-made, warm, safe places to weather the storms that life tosses out. Bourgeois / Lechasseur architectes has constructed a multi-family residence that evokes both the movement of sailing and the stability of home in a very literal way with Cabin A. The 2,100-square-foot chalet is located in the village of Petite-Rivière-Saint-François on the St. Lawrence River, an hour’s drive from Quebec City. 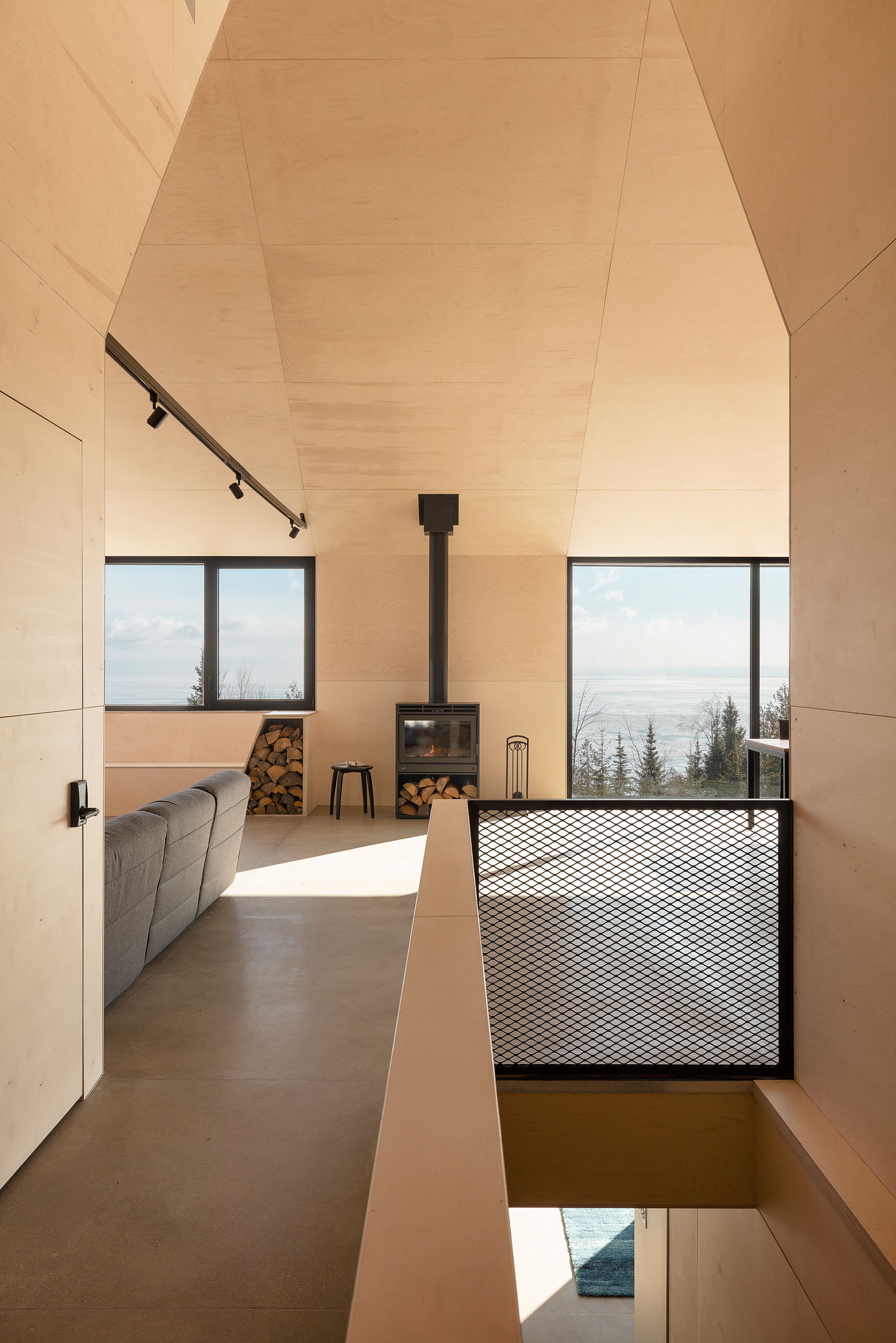 Cabin A is the first in a series of vacation homes in the Charlevoix region of Quebec to be built by Bourgeois / Lechasseur, which came to prominence in the mid-2010s. The firm specializes in modern designs that are deeply influenced by the folkways of rural Quebec. For Cabin A, the culture of the St. Lawrence and those who live and work on the river guided the design. “The nautical forms and construction techniques have always been an influence in my practice—probably because I’m from an island full of fishing boats,” says associate architect, and principal of Cabin A, Olivier Bourgeois.

The A in Cabin A stands for the Alfa flag in the International Code of Signals. In turn, the structure itself takes a shape that resembles the letter, showing the complete resonance of the nautical concept through the design. Bourgeois notes that the solitude of the house, its insertion into the environment, echoes the beautiful interruption of a boat upon the otherwise serene river. “Cabin A is tribute to the St. Lawrence pilots,” he says. 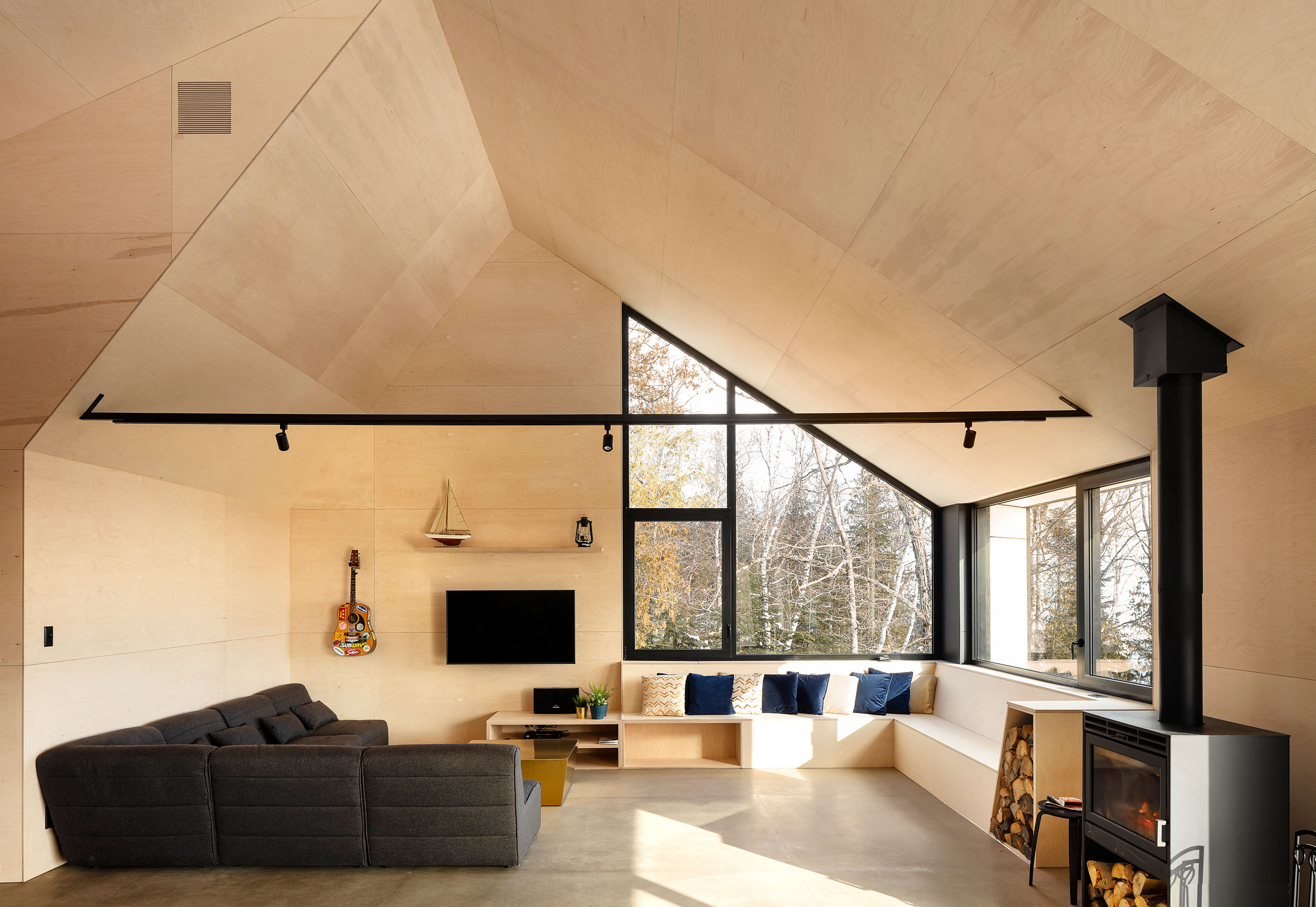 Due to the alphabetical posture, Cabin A has generous living spaces on the ground floor that taper to more intimate ones toward the top of the A. The primary entrance is a mud room that leads to the main floor where the expansive communal living and dining spaces offer a 180-degree panorama of the St. Lawrence and an area big enough to seat a table of 10 to 12 people. In the modern kitchen, velour meets granite and birch plywood sheeting adorns most of the interior. Gallery lights further accent the wooden expanse and add a modern touch. Bourgeois says that although the sheeting was difficult to install, the warm feel makes it worth it. The material harnesses the sylvan spirit of the construction, deep in the countryside of Quebec. A character wood-burning stove with a minimal silhouette serves not only as a separating element between the open-concept dining and living rooms but also as a centring point that pays homage to the winter living of old.

Cabin A connotes the togetherness and journey of a voyage at sea without the cramped nature of a vessel. The airy interior funnels thought and movement out toward the river and up to a loft that rests under the crest of the building, accessible by a ladder. The loft, which has a modern triangular window that follows the contour of the roof, is ideal for children or someone who needs alone time. Sometimes open concepts can be too exposed, and spaces like this, apart from the group, can be important, especially when occupants spend more time inside in the winter months. 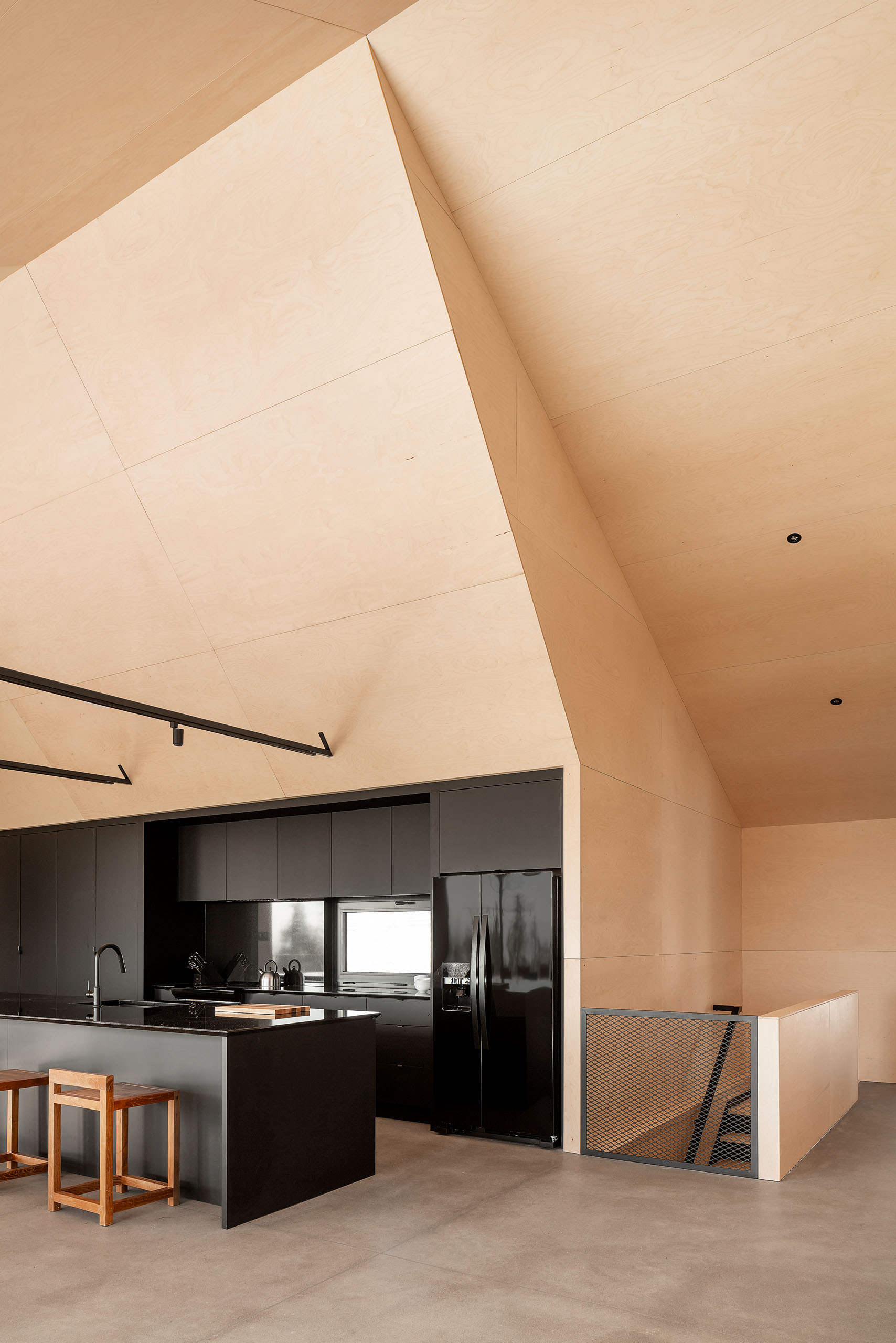 The exterior, clad in dark woods and metallic roofing, is broken up by the light wood and windows that are used for highlighting entrances as well as a generous patio that extends from the dining area. Seen from a specific angle, the darkness of the exterior gives viewers the impression of coming upon a silent ship in the night, a feeling that is almost unnerving but soon dissipated by the lightness and obvious conviviality of the interior.

Furthering the connection to nautical experience, the space below the living area, a partially above-ground basement, is made up of three identical bedrooms that have bunk beds of sorts. The privileging of living space over large bedrooms is due to the architects’ multi-family intention, making the house well suited to trips to the river or to the local ski resort, Le Massif. 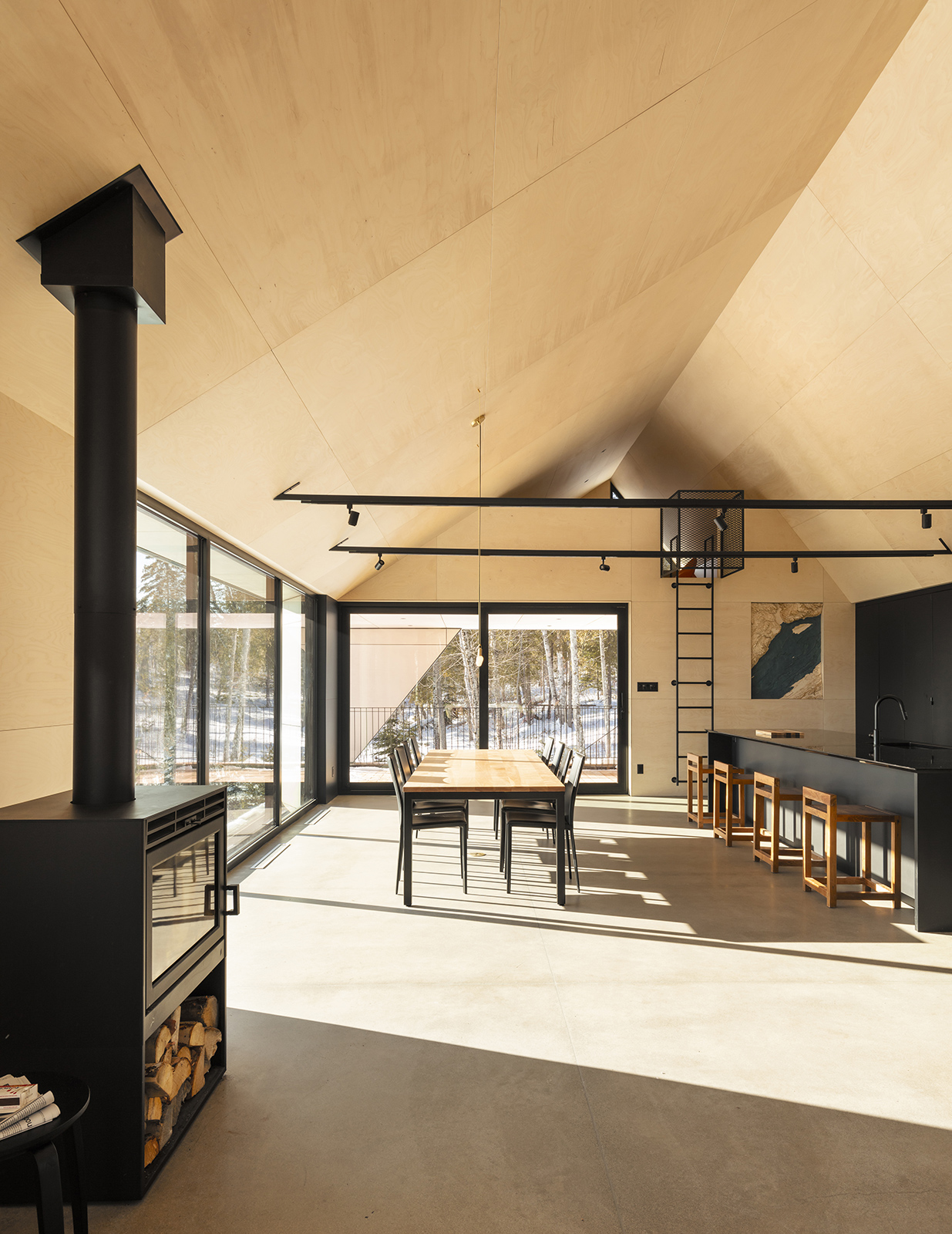 The stark colour contrasts of the interior and exterior were influenced in part by the team of graphic designers that assisted in the design of the house. Beautiful topographical renderings are set, decoratively, into the birch walls throughout the house. Lines immediately come to the forefront, highlighting a design language that further reflects the A. This structure wants to say something, and does, no matter from which angle you view it. 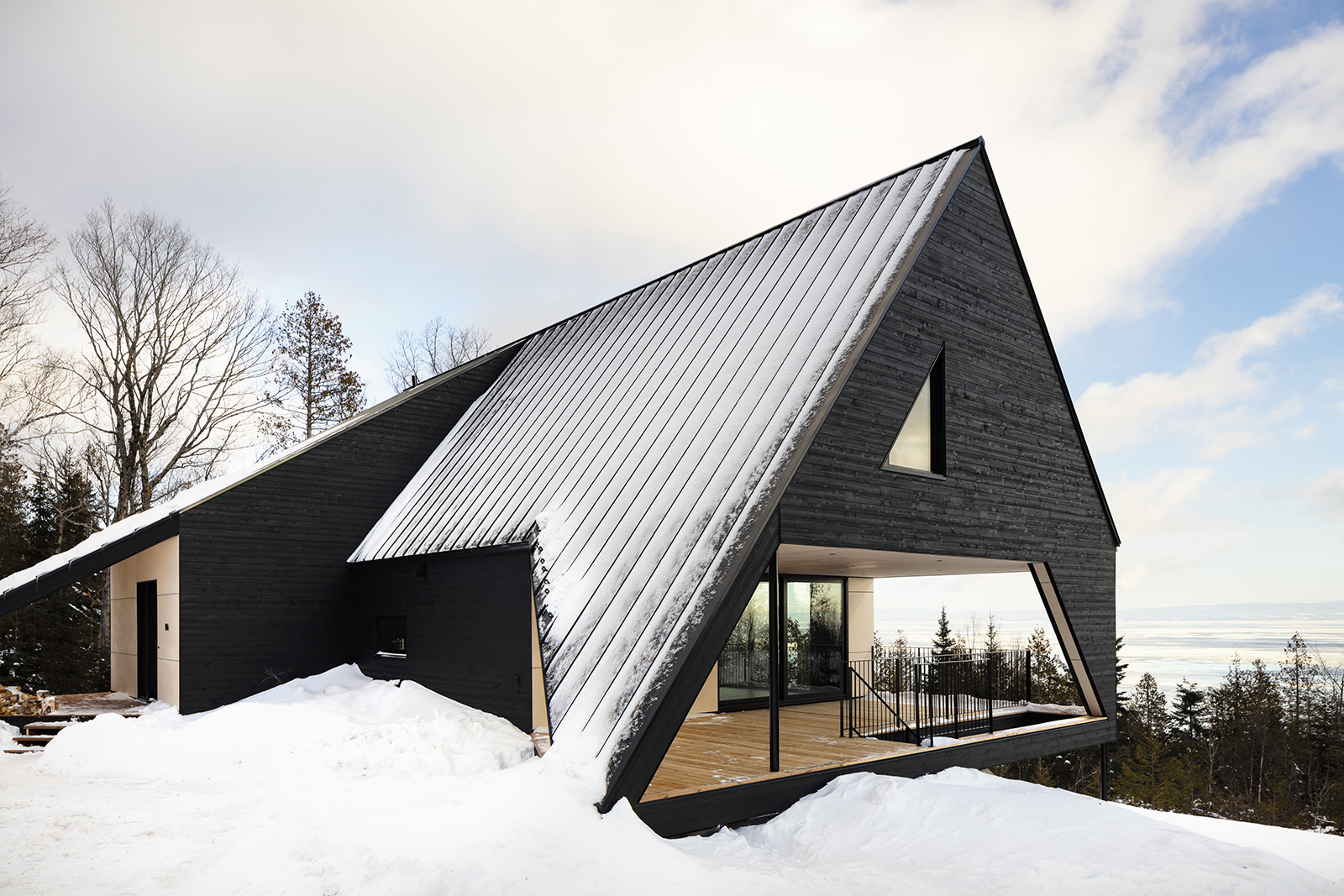 The Ice Canoes Of Carnaval 8 Amazing Canadian Skyscrapers Being Built in the Near Future