“Almost there,” Scovia whispers in my ear. The muscles in my legs are screaming with exhaustion. Scovia, my porter, gestures at the ranger ahead, who is carefully searching the dense thicket around us while speaking softly into a radio transceiver. The static of the voices coming from the transceiver contrasts oddly with the ancient air of the forest. “He’s talking to the trackers,” she tells me. “They are close. They’ve found the gorillas.”

We have spent the last hour and a half hiking through Uganda’s Bwindi Impenetrable National Park in search of the Kahungye family of mountain gorillas, one of 15 human-habituated gorilla families that live there (15 more unhabituated families also roam the park). Gorilla trekking is a popular tourist activity in Uganda, as well as in neighbouring Volcanoes National Park in Rwanda—the only places in the world where the 1,000 remaining mountain gorillas can be found. Their gentle behaviour was introduced to mainstream consciousness in the ’70s by American primatologist Dian Fossey, whose activism told the story of the shy yet playful gorilla; one who shares 98 per cent of a human’s DNA and many of our characteristics, from mischievousness to curiosity. Fossey’s work improved the fate of the mountain gorilla, and the world came to care about them as she did, boosting tourism by those who wanted to walk in her footsteps. 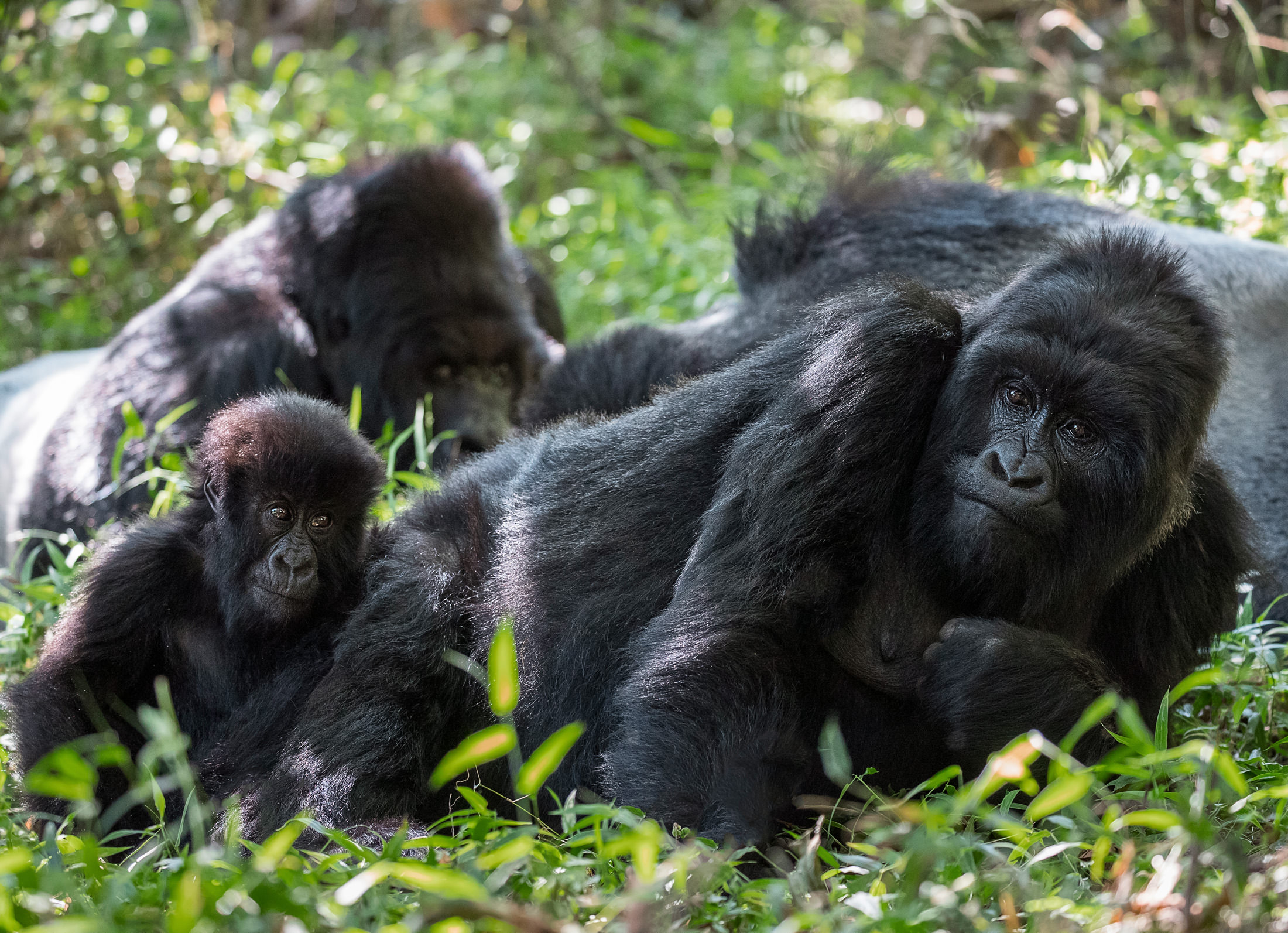 Gorilla’s share 98 per cent of a human’s DNA and many of our characteristics, from mischievousness to curiosity.

Today, tourism plays a nuanced role in wildlife conservation. Oftentimes, it is human ignorance that tips the scales between ethical and exploitative wildlife attractions. The onus of engaging in responsible travel, then, is on those who fuel market demand for animal experiences. But how do travellers know what is ethical and what is exploitative? G Adventures, a Toronto-based travel company, has worked with various non-governmental wildlife organizations for the past two years on updating the company’s Animal Welfare Policy—which contains practices that are upheld by all their journeys. The policy highlights banned practices, such as drugged animals, wildlife performances, and wild animal handling, demonstrating that responsible tourism can be used as a vehicle for protecting animals, rather than harming them.

G Adventures’ ethical practices led to a partnership with the Jane Goodall Institute in 2016, launching a collection of 20 wildlife-specific expeditions endorsed by Goodall. Travellers can spot wild tigers in the Himalayas or search for Komodo dragons in the Indonesian jungle… or, as in my case, seek out gorillas in the Ugandan mountains.

Gorillas are the main event of G Adventures’ eight-day culture and wildlife excursion in Uganda; however, the first two acts, chimp trekking and safari drives, are not to be overlooked. The journey begins in Uganda’s capital city, Kampala, where cars, boda-bodas (slang for motorcycles), and people waltz together in organized chaos, and from which rust-red roads sprawl outwards in all directions. We head westward to the rainforested Kibale National Park, or the “primate capital of the world.” Rolling landscapes of lush fauna, vast tea plantations, and villages flash past. As we reach the park, baboons, stoic and unfearing, greet us on the road—our introduction to one of the 13 primate species that live in the area. 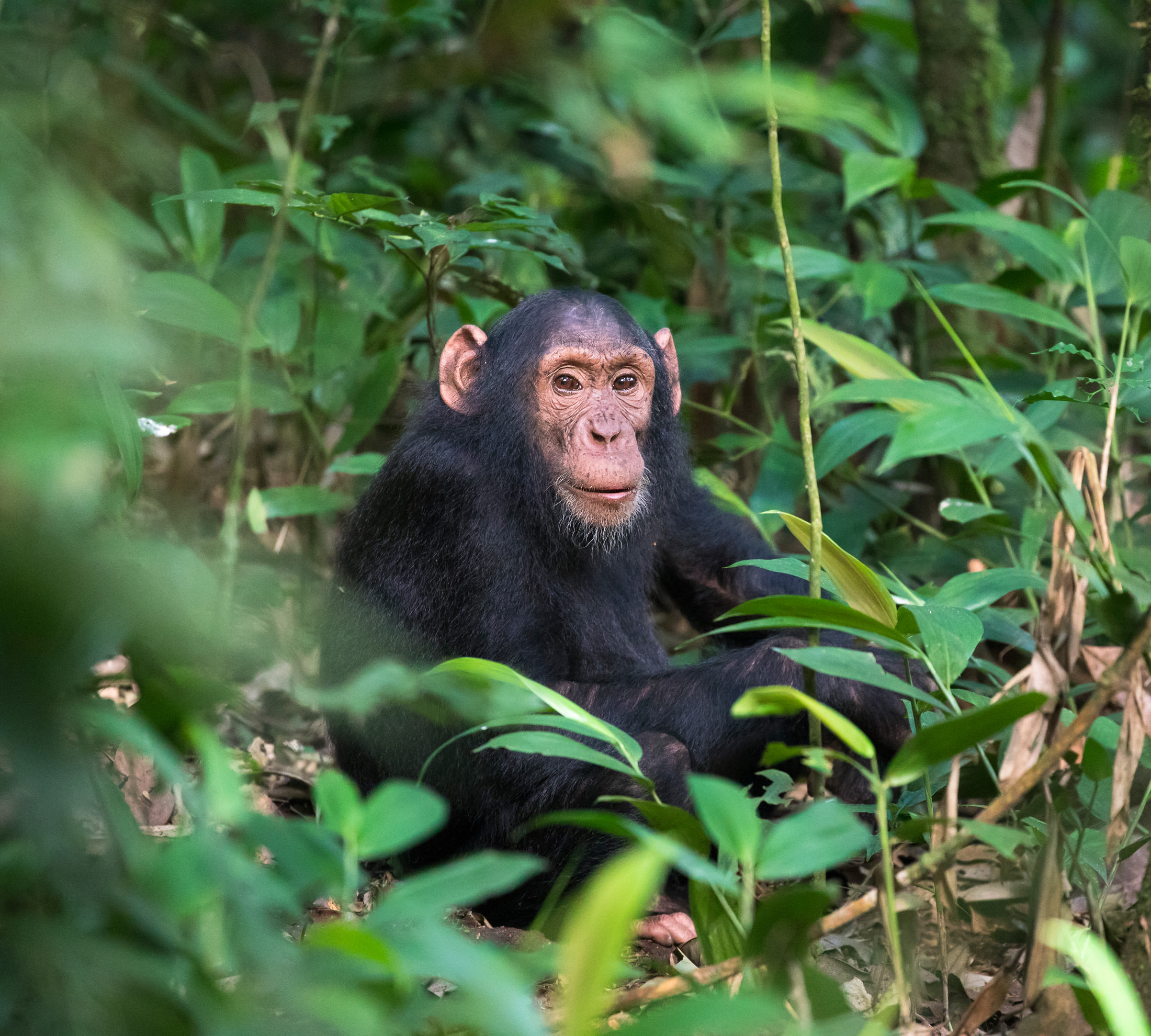 Small with black bodies and curiously forlorn faces, the chimps seem mildly interested in us at first, before ignoring us entirely.

Chimpanzees, as central to Goodall’s research as gorillas were to Fossey’s, seem a fitting beginning to our journey. Of the 13 chimp communities in Kibale, two are habituated to human presence and visited by tourists regularly. “Chimps are like humans,” our guide, Alex Turyatunga, says. “They have emotions, and all are different.” We must agree to abide by a set of rules before we start our hike to find the chimps: voices must be kept low, flashes on our cameras turned off, eye contact with the animals avoided, distance kept, and most importantly, pants must be tucked into socks to prevent fire ants from crawling into places they are not welcome.

Turyatunga leads the procession, searching for signs of chimps in fruiting trees above and listening for their calls as he marches onwards. The chimps of Kibale are not tracked using devices like chips; they’re found through the skill of guides, who learn to interpret the secrets of the forest like poetry. An hour in, Turyatunga halts, suddenly stiff, and motions us to stay still. A trumpet-like sound slices the air like a cleaver. “Elephant,” he whispers. “Let’s go. Fast.” We hurriedly clamber uphill through roots and branches until we are halted once more. This time, there is another type of tension in the air. The chimps are close. I hear them before I see them: a sharp scream up ahead. The primeval sound reverberates through my trembling bones. And then, they are all around us.

Small with black bodies and curiously forlorn faces, the chimps seem mildly interested in us at first, before ignoring us entirely. Some sit alone, hugging themselves with long arms, content to watch us closely with human-like eyes. Others busy themselves by grooming each other’s shaggy fur. Above us the trees rustle as chimps swing from branch to branch, picking at leaves and bugs. They don’t stay still long, and we must hurry to keep up. They look to be enjoying the chase.

The chimps of Kibale are not tracked using devices like chips; they’re found through the skill of guides, who learn to interpret the secrets of the forest like poetry.

Humans represent one of the biggest threats to chimps, who get caught in snares targeted at bush meat or killed for stealing sugar cane and honey from domestic gardens, Turyatunga explains. The park has an on-site vet specifically for injured chimps, he says, but only if an injury is human-caused. Nature must run its course otherwise.

We depart Kibale and head south to Queen Elizabeth National Park—nearly 2,000 square kilometres of vast savannah, where lions, buffalo, and elephants roam among the tall grasses and cacti. The threat of a storm looms above as we set off on a safari drive; a bolt of lightning flashes from the heavens into the horizon and the rains come down with conviction. Our ranger, Innocent Turyamuha, narrates the rolling array of wildlife we pass by: herds of Ugandan kobs, a delicate type of antelope; regal-looking waterbuck; and an elusive leopard, obscured by branches in the distance.

Until 1995, the park could only afford one ranger per five square kilometres to protect animals from encroaching poachers. The money brought in by wildlife tourism has allowed for more rangers and better equipment. There are still poachers, Turyamuha tells me, but “we are many,” he says of the park’s rangers.

The anticipation to see gorillas grows only more potent as we drive the winding, mountainous road to Bwindi. The road runs along a steep cliff and is just wide enough for two cars to drive past each other, while valleys of potato crops lie below. A sea of mountain ranges is layered across the sky, fading into the misty horizon. The gorillas of Bwindi are well protected. Visits are limited to once daily for a one-hour period by groups no larger than eight per gorilla family. Trackers are sent up the mountains in the early hours to begin the search. They stay in radio contact with rangers and guides armed with AK-47s—used for firing warning shots should a lone silverback or elephant find us—who then follow with tourists. If you are sick, you will be turned away: gorillas are extremely susceptible to human illnesses, which are a significant threat to gorilla populations. Poaching has not been an issue in the area for six years. In the past, gorillas were killed for trophies or as accidental targets in traps set for small bush animals by local community members. To stem this, the park collects $25 per tourist to give to locals, who are encouraged to buy sheep instead of bush meat. Hiring a porter to carry your bags during the strenuous hike is also encouraged, as it contributes to the local economy.

My porter, Scovia, stays in front of me, reaching out a hand when the path gets steep. We settle into a rhythm as we grapple through roots and fallen branches, mud squelching at our boots and twigs lusting after our hair. I try to avoid several giant puddles filled with rainwater; Scovia tells me they are elephant footprints from the night before. As we ascend, the forest thickens and the air thins. Sound is muffled by the ancient trees, and there is an unabridged wildness around us—an unpredictability as to what we could stumble across next. 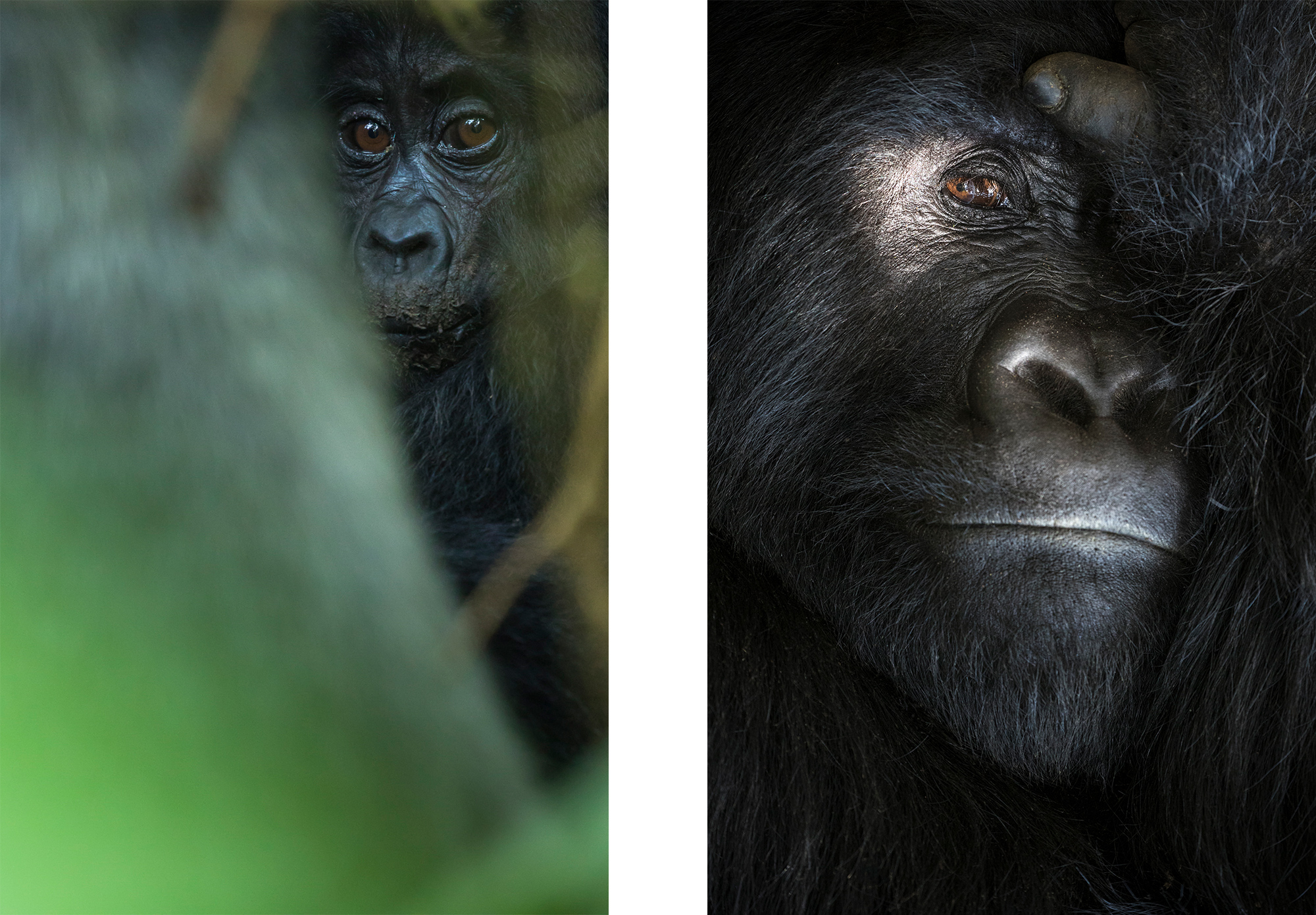 Up close, one can take in the details of each gorilla: the wrinkles of their leathery skin, the softness of their brown eyes, and the individuality of their human-like expressions.

A rustle in the branches in the distance is my introduction to the gorillas of Bwindi, followed shortly by a sharp grunt. We’ve caught up to the trackers, who lead us off the trail into waist-high bushes of stinging nettles and beds of fallen leaves, clearing the densest obstructions with a machete. Like an opening curtain in a theatre, the cleared thicket gives way to a valley, where dotted through the bushes and in the branches, a family of gorillas come into view. Their black fur is a striking contrast to the deep greens of the foliage; their heavy-browed faces seem to be carved from an ancient leather. A sour, musky scent hangs off them like perfume. Like the chimps, they pay us little attention: a feast of leaves and insects is a more pressing concern. Occasionally, a branch in the distance will break, the sound echoing through the valley, and a gorilla will tumble into the bushes, only to get back up and continue plucking at leaves languorously.

The trackers assure the animals of our amity with vocalizations—a low, grunting mhm—to which the gorillas respond in kind, a sign of contentedness. Fossey discovered these exchanges are a way to gain a gorilla’s trust. “Look. Baby.” A tracker points ahead at a tree, where a small gorilla with plush fur hangs from a branch. The tracker tsks at the baby as one might tsk at a dog to pay attention. The baby attempts a clumsy chest beat in response, and the rat-rat rhythm strikes clearly through the valley. The trackers know every gorilla well. Each has a name and distinct personality: some are playful and boisterous, others shy.

These familiar characteristics are their most striking quality and what captivated Fossey most about gorillas: how human an animal can be. The paternal gentleness and king-like authority of the silverback, named for the silver fur that marks age and dominance on his body, lend him an arresting presence. He sits in serenity with his feet folded in front of him and his back against a wall of foliage. His face is statuesque, paused in meditative contemplation, and his soft brown eyes flicker to mine. My romanticism tells me he can understand my thoughts through the connection of our gaze, but I look away—direct eye contact is not a romantic gesture in the animal world, yet the sweeping sensation in my heart stays. Suddenly, he stands with his weight on his knuckles, and the muscles in his arms flex, assuring us of his strength. He returns to the forest. My time with the gorillas is over. 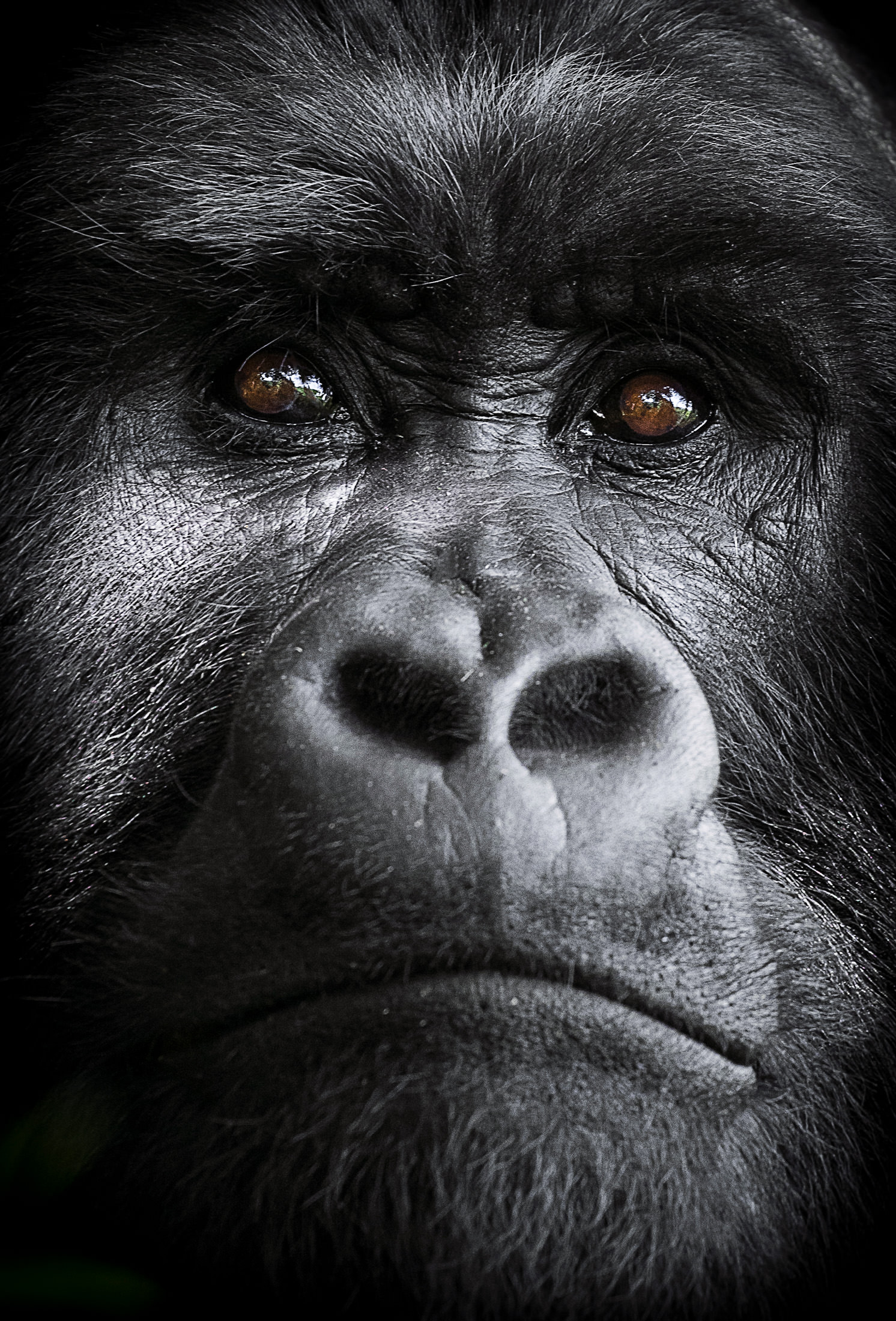 Familiar characteristics are the gorillas’ most striking quality and what captivated Fossey most: how human an animal can be.