It’s difficult to shake the feeling that you’ve stepped into a scene from Downton Abbey when visiting southwest London’s Templeton House. This is probably because the opulently restored property’s oak-panelled library once served as a location for the show. The 240-year-old Georgian mansion isn’t in any way a stuffy, lifeless museum. On the contrary, an extremely meticulous and respectful multi-year renovation has restored portions of the house to their original glory while bringing other areas firmly into the 21st century. The result is a property that honours its illustrious past and sets the standard for modern comfort and luxury.

Constructed in 1786, the building is named for its original occupant. Lady Elizabeth Templeton, an artist and socialite, was renowned in her day for the designs she created for the English potter Josiah Wedgwood. Years later, in 1919, a young MP named Winston Churchill lived there when the home was owned by his cousin Freddie Guest. During the Second World War, it served as a hospital and then a dormitory for students attending the University of Roehampton. By the time its current owners, David and Laura Rich-Jones, purchased it in 2010, the property was in a state of disrepair and needed some serious TLC.

It wasn’t the first time the couple had embarked on a massive renovation project. Their company, Richstone Properties—a boutique real-estate development firm—specializes in bespoke, high-end residential homes for sale or rent. Its exclusive villa in Provence, La Bergerie, is considered one of the finest of its kind and, like Templeton House, can be rented for a few days or a few weeks at a time. Both properties have a full complement of staff, including butlers, chauffeurs, housekeepers, and cooks, providing a level of service rarely seen outside of superyachts. 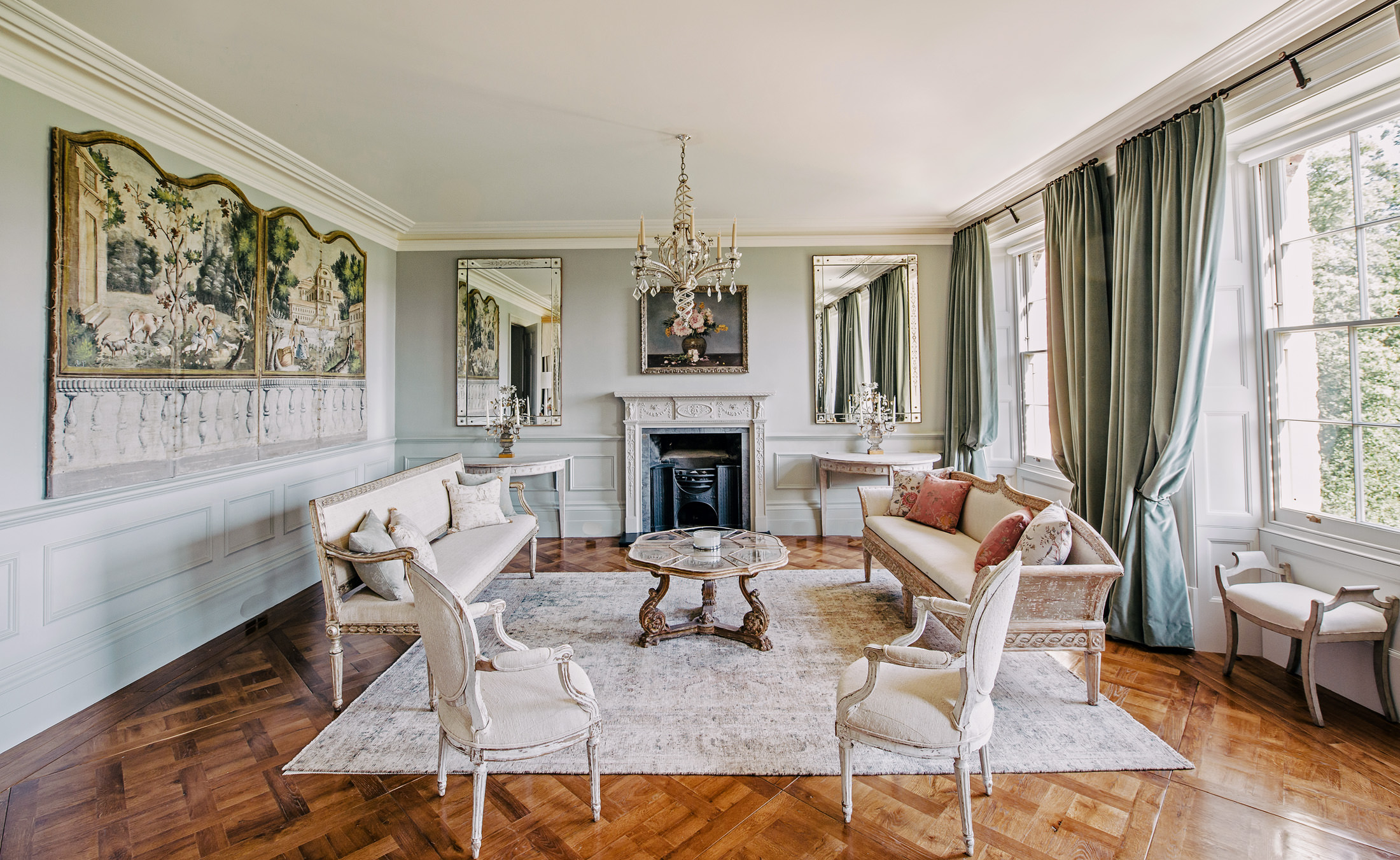 An extremely meticulous nine-year, $53-million renovation has restored portions of the 28,000-square-foot home to their original glory while bringing others firmly into the 21st century.

Across the street from the exclusive Roehampton Club and steps from the nearly 2,000-acre Richmond Park, where herds of deer roam freely, Templeton House occupies a prime piece of land. “We’ve lived in the neighbourhood for a long time,” Laura Rich-Jones explains, “and we’ve always loved this house. When we first moved in here, there were still students living in the various rooms. It was hilarious—our children would skateboard along the corridor, and the students threw great parties.”

To realize the transformation, the Rich-Joneses assembled a dream team of researchers, craftspeople, and design experts. The gardens were restored and designed with the help of historian and landscape architect Todd Longstaffe-Gowan, who oversaw garden redesigns at both Chapel Court at Hampton Court Palace and Kensington Palace. Joa Studholme, author and colour consultant for paint manufacturer Farrow & Ball, came up with the idea of painting the games room in riotous Full Gloss Radicchio; she went with the more subdued shades of Mizzle and Peignoir in the bedrooms and Elephant’s Breath—grey with a touch of magenta—in the hall. She calls the finished design “a balance between opulence and restraint.” 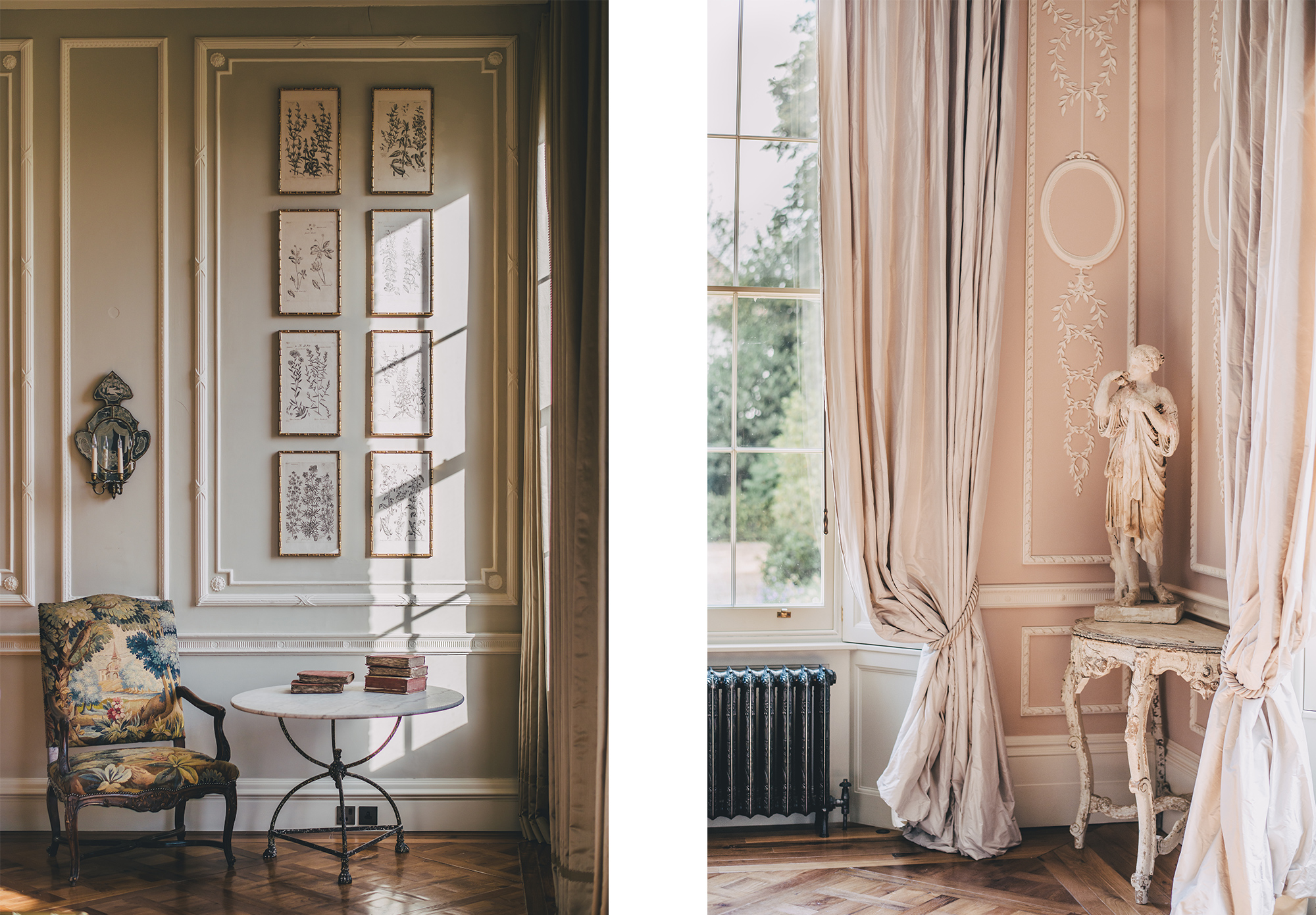 David and Laura Rich-Jones, owners of the historic mansion, brought on a host of experts to help with the restoration. 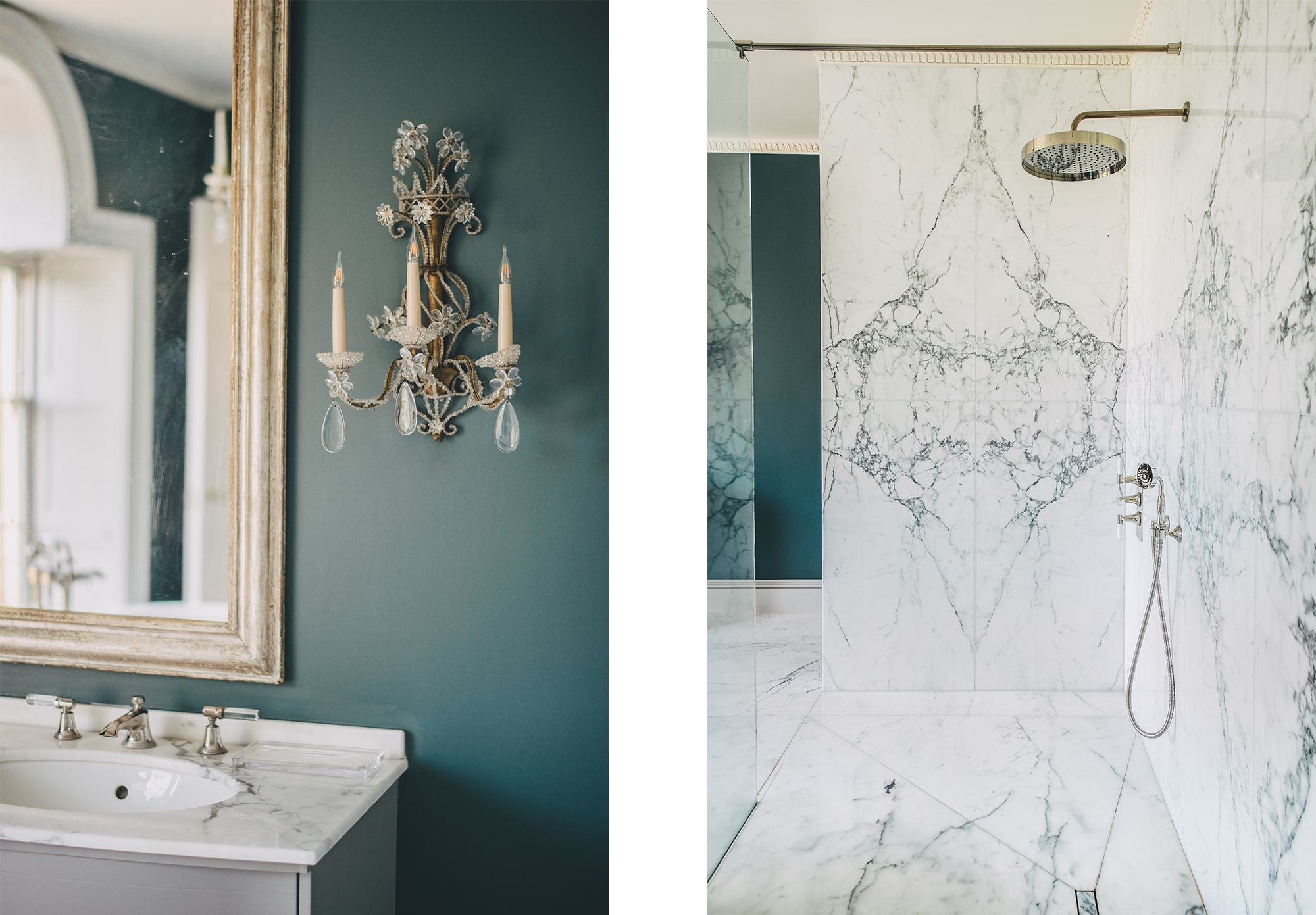 Gone are the 27 rooms of the boarding house. They’ve been replaced by eight suites ranging from 600 to 1,000 square feet, each with its own lavish, marble-lined bathroom. The basement has nearly doubled to 9,000 square feet to make room for a gym, a 3,000-square-foot spa with, at 25 metres, what is thought to be the largest private indoor swimming pool in London. A soak in the hydrotherapy pool and a steam are just the thing after an especially intense match on the championship tennis court.

Craftspeople from Wedgwood re-created the decorative plaster plaques designed by Lady Templeton, and each brick on the building’s amber façade was cleaned or restored and, in many cases, hand-painted to match the original colour.

While the main renovation is complete, the Rich-Joneses are not finished with the Templeton House yet. Work continues on a number of outbuildings, including the 7,700-square-foot dower house along with stables, four cottages, and an art studio. Vegetable gardens and orchards are also in the process of being planted. With the house restored and updated, it’s beginning to feel like Templeton House’s next 240 years could be every bit as exciting as its first. 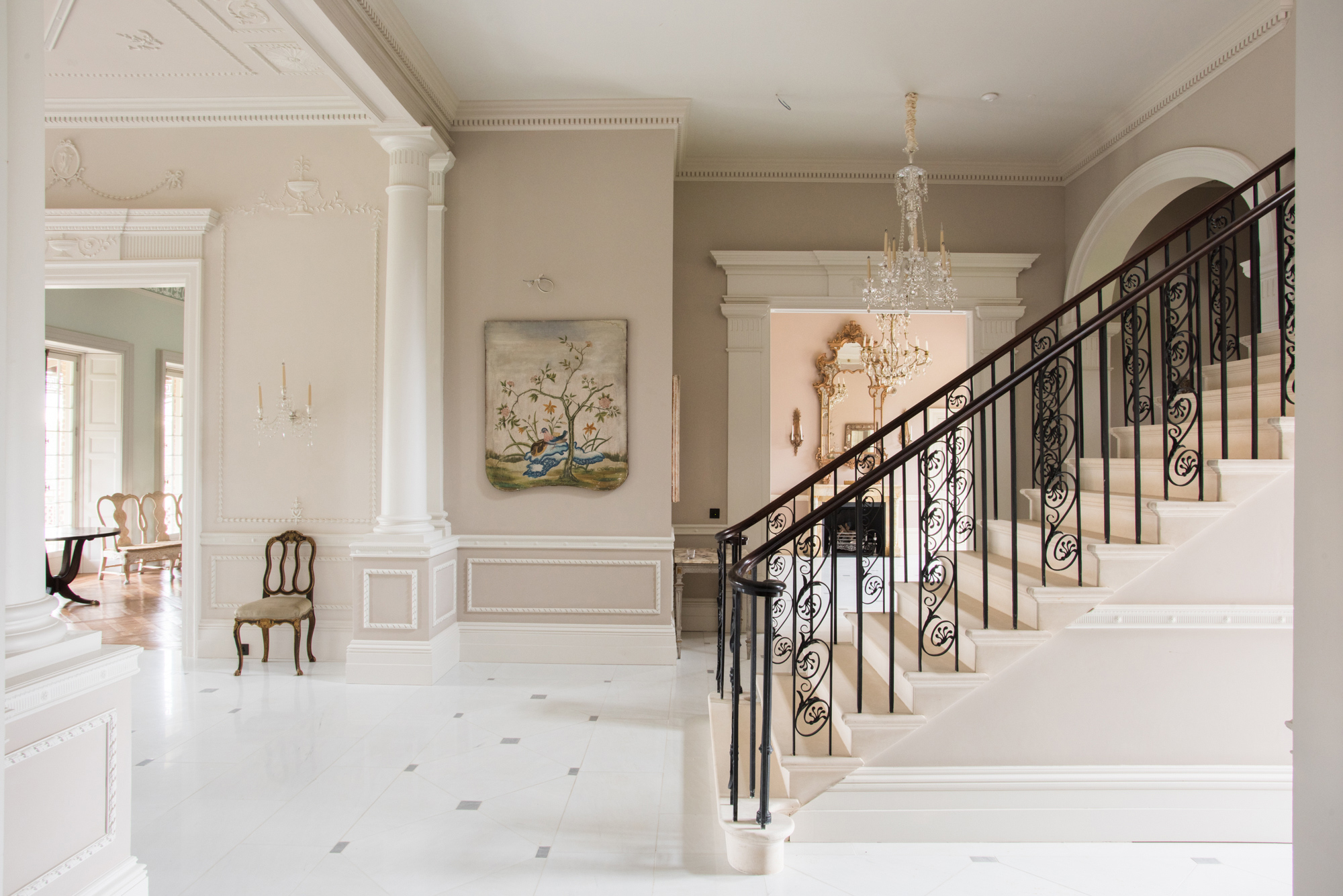 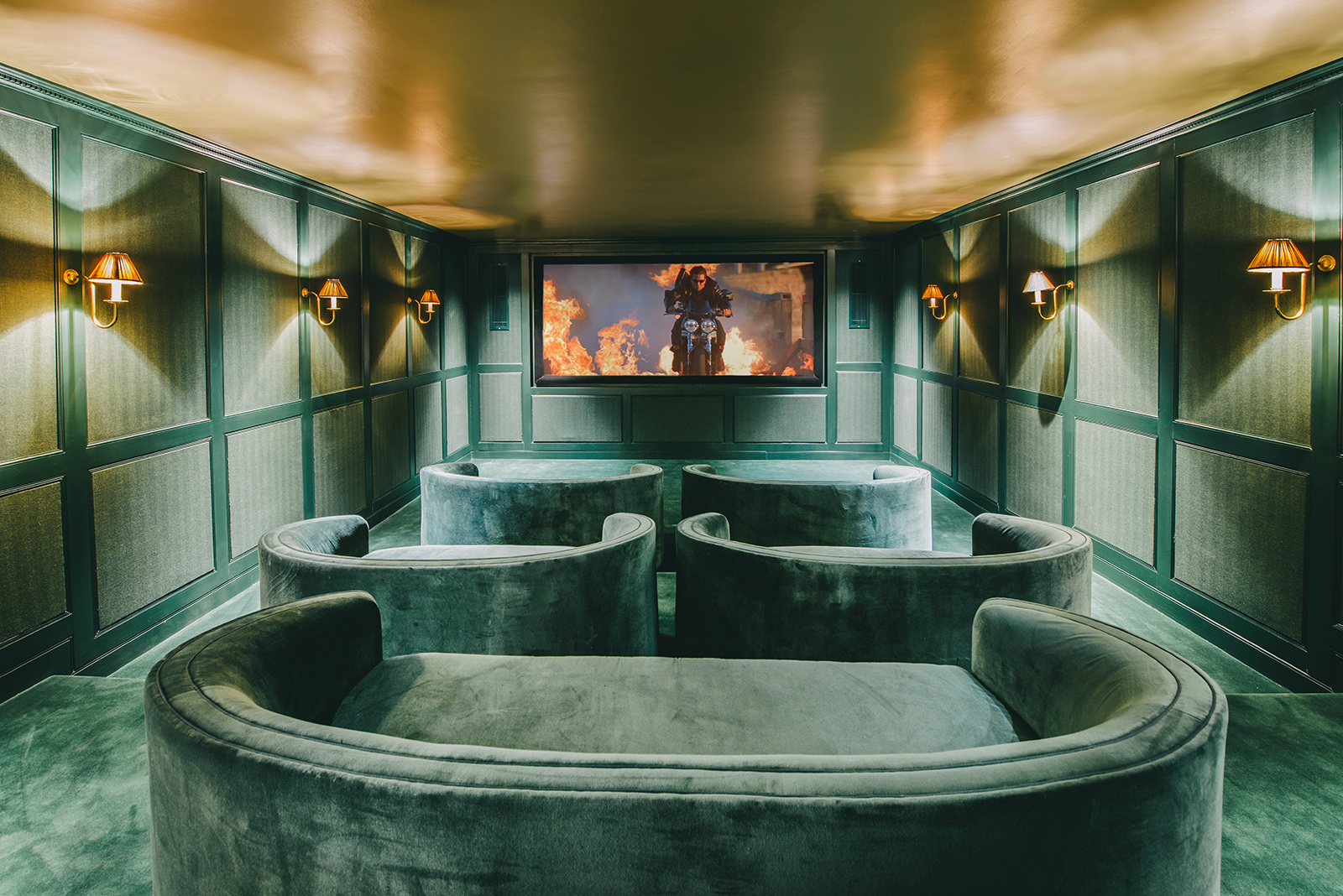 Lush, green velvet chairs and loveseats are arranged in front of the 125-inch screen in the home cinema. 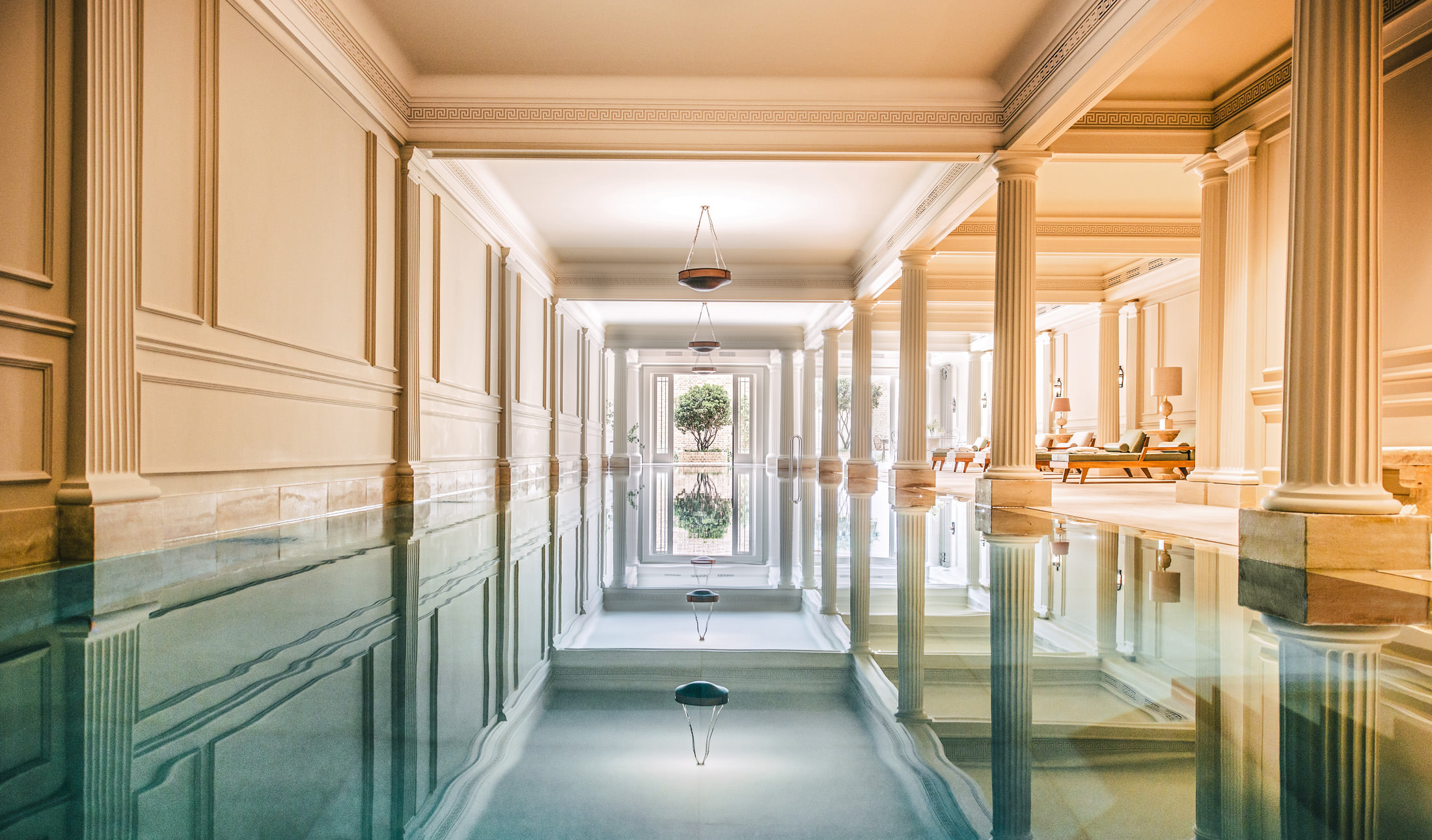 The basement houses a gym and a 3,000-square-foot spa with, at 25 metres, what is thought to be the largest indoor swimming pool in London. These New York Skyscrapers Are Getting Away From Glass Box Architecture Frida Kahlo: Making Herself Up