The year 2018 saw the food and beverage industry swiftly respond to massive public pressure to cut out plastic straws, with establishments abandoning the single use products altogether or adopting reusable or biodegradable ones. The quick shift away from straws proved that bars and restaurants are more than ready to start eliminating single use products from their bar programs. They should also be thinking more about where their ingredients come from and how to get the most out of them to create less waste. This change is happening worldwide, and a number of bartenders based in Canada are leading the charge for sustainability in the cocktail world, one drink at a time.

Toronto-based bartenders Kelsey Ramage and Iain Griffiths are drawing attention to the waste produced in bars with Trash Tiki, a pop-up bar takeover where they serve a menu of anti-waste cocktails. (Essentially zero-waste cocktails as they are using normally wasted ingredients, the duo prefers the term “anti” as there is still compostable waste produced.) They chose tiki-style drinks because this is something they enjoy and because these are emblematic of just how wasteful the bar business can be. “It was one of the more challenging categories of cocktail,” Ramage explains. “But that was just it—how are we going to make these look and taste like tiki drinks without using fresh juices, elaborate garnishes, and plastic swizzle sticks?”

The project started in 2016 when Ramage and Griffiths, who are partners in life as well as business, were working at the award-winning Dandelyan bar in London, England. They grew frustrated with the perception of sustainability as an all-or-nothing pursuit. “[For bartenders,] everyone felt like it was very complicated and there were no recipes out there,” Griffiths recalls. “No one had a means of knowing, ‘Okay, if I want to be more sustainable in my bar, what do I do?’ ” 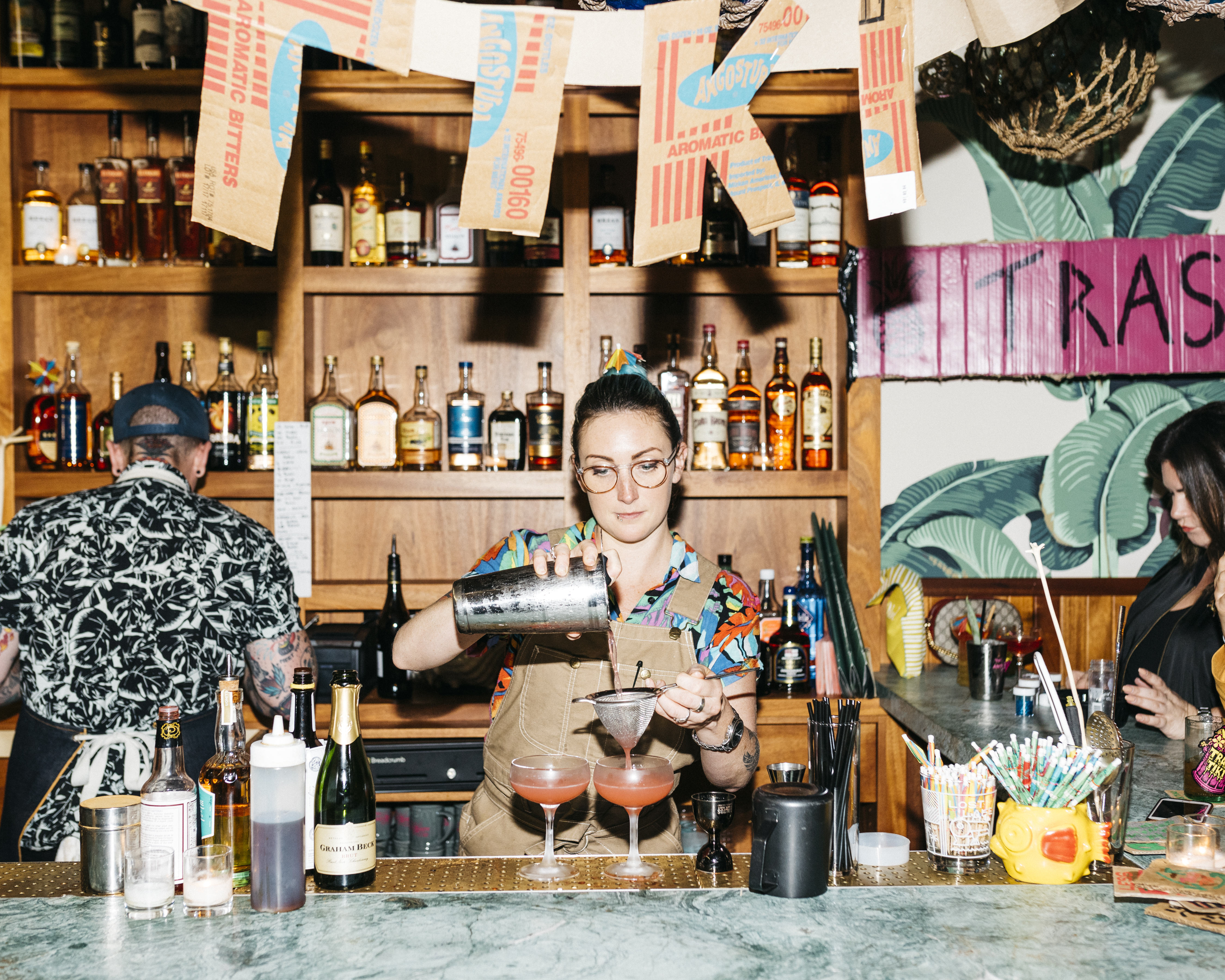 Enter Trash Tiki, a vehicle for the duo to show the industry how simple it can be for a bartender to start incorporating sustainable methods into their practice. It is part of the duo’s larger Trash Collective, a growing umbrella that includes their consultancy practice and online platform. “For the first year, we were just trying to get people to understand that they should just do what they can,” Griffiths says. This might include finding alternatives to napkins, using the spent husks of citrus fruits to make stocks, and roasting avocado pits to make orgeat syrup.

Ramage and Griffiths admit their ideas were met with some resistance at first, yet they’ve been able to take their pop-up to over 70 cities since the first one (December 2016), with host bars like Toronto’s DaiLo and Chicago’s Broken Shaker often adopting the practices after Ramage and Griffiths show them how it’s done. Though their bar-hopping world tour has done a tremendous amount to further the cause, the movement in Canada isn’t solely rooted in Toronto. In 2017, Kaitlyn Stewart of Vancouver’s Royal Dinette won the Diageo World Class competition for best bartender of the year, making her the first Canadian and the second woman to be named world’s best bartender—and she did it with a zero-waste cocktail in her arsenal.

Stewart made a cocktail in the competition’s sustainability challenge (one of the six) using both imported ingredients—pineapple and lime—and an ingredient local to Vancouver, sake from Granville Island’s Artisan SakeMaker. She made a gomme with the pulp of the pineapple, mixed the fresh pineapple juice with kasu (a by-product of the sake-making process), and made bitters using the pineapple’s skin, while the lime husks made a citrus stock. Every part of the pineapple and lime was used. Those elements were combined with Tanqueray and salt flakes resulting in a drink she dubbed Diced Pineapples. 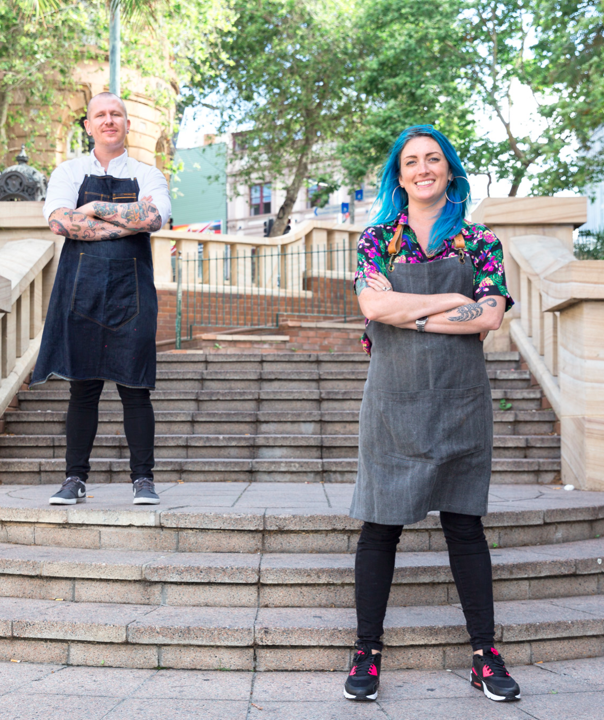 “Not only did [the competition] bring awareness, but it showed different facets of sustainability literally from around the world,” Stewart notes. “There were 57 competitors, all trying to make a sustainable cocktail. There wasn’t one cocktail that was alike. So that, in part with Kelsey and Iain doing their tour, it’s opening up—even in a small way—this idea to other bartenders.”

For Stewart, the zero-waste cocktail movement is the bar world’s expression of the nose-to-tail movement that has swept kitchens over the past 20 years. In fact, working at Royal Dinette alongside a kitchen allows Stewart more room to explore the possibilities of the zero-waste cocktail craft. “It was easy to implement that into the bar program in terms of sharing products,” she explains. Stone fruit season saw her collecting the pits from peaches and apricots in order to make orgeat, while the kitchen makes ice cream from her leftover cherry pits.

“We’re very seasonal,” Stewart says. “Our cocktail list changes four times a year. We do a lot of jarring, canning, pickling, and we make a ton of shrubs [a fruit-infused, vinegar-based syrup used in mixed drinks], so even if something isn’t available or in season, it’s still accessible.” She also believes in forging close relationships with her suppliers, focusing on the origin of ingredients, and trusting the vast knowledge of farmers and foodies alike. Stewart says she’s already seeing major players in Vancouver—including the Keefer Bar, the Diamond, Grapes & Soda, and Tocador—adopt similar approaches to and attitudes about sustainability. “Not only is it good for the environment, but it’s also really good for our bar costs,” she says.

Meanwhile, Ramage and Griffiths have relocated to participate in Toronto’s thriving cocktail culture because while there’s a great deal of work still to be done, both the city and the industry are ready for their ideas. “The venues that are set to open now aren’t sustainable bars in name, but have it as part of their identity,” Ramage explains. “Right now a lot of cities in Canada are poised for that, and over the next year we’re going to see that happen.”

“This is the next evolution in modern bartending,” Griffiths adds. “It’s not a trend, and so it’s not just going to happen overnight. It’s going to evolve over the next three, five, 10 years.” This Natural Distiller Is Perfecting the Mid-Week Non-Alcoholic Cocktail