A weekend cottage on Lake Ouareau outside Saint-Donat, Quebec (roughly a two-hour drive northwest of Montreal), might be understood as a small monument to a big idea: coming together to make a fresh start. Consisting of two buildings connected by a glass-walled bridge, La Petite Soeur is, nonetheless, all about togetherness. It bridges two families, the past and the present, as well as communal life and individual privacy.

For a newlywed couple who brought a total of five children into the marriage, architecture firm ACDF lightly renovated and added an extension to a traditional rural house, having completed the project earlier this year. The exterior of the existing building was kept largely as is, with only minor interventions done to repair items like old gutters. “But even what we did do, you can’t see,” says architect and ACDF co-founder Maxime-Alexis Frappier. “When you see the rusted steel roof planks, the patina of the wood, you feel as if the house [has been connected] to this site forever. We wanted to just frame it, so we decided to build a separate volume [building] so pure that the contrast of the new building’s purity with the patina of the old would create a balanced composition. 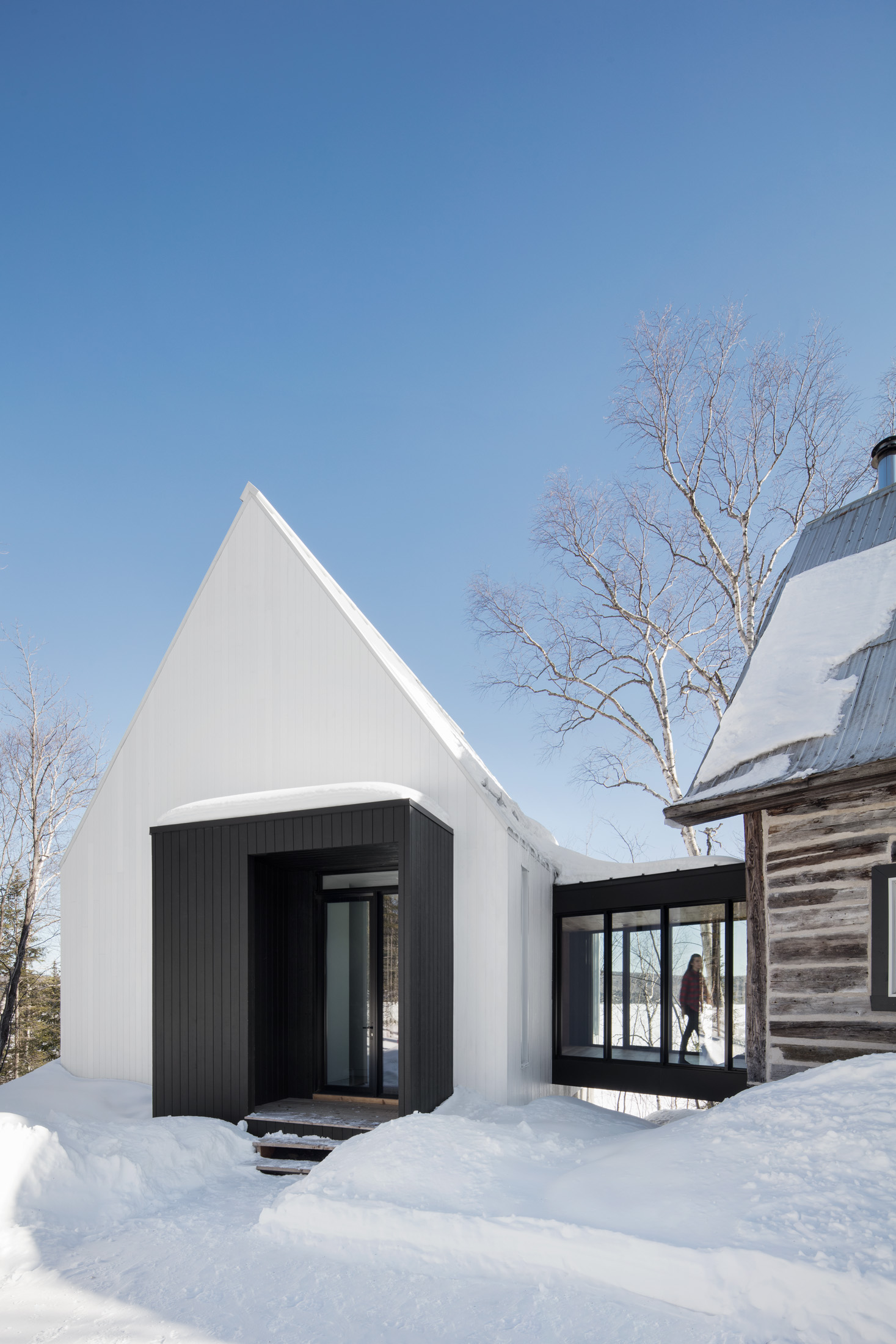 Indeed, as it steps down a steep slope next to the lake, the extension looks like the Platonic form of a gabled home; Frappier refers to it as “almost a Monopoly house.” The minimal wood-plank façade, sandwiched between a sheet metal roof and an exposed concrete base, is whitewashed matte to recall the chaux (limewash) finish that is added to paint to protect Quebecois barns from peckish insects. The extension simultaneously opposes its sibling, with a refinement that strips away textures, colour, weathering, and age, and twins it in mass and volume in a way that broadcasts respect for the original structure while feeling wholly contemporary.

Both interiors match their high-contrast façades: the existing house retains its amber-stained wood plank flooring, while the extension has floors of polished concrete and clean-lined, jet black wood-slat walls and ceilings. Down a wooden staircase, the new master bedroom, bath, and an outdoor Jacuzzi nest in the hillside, getting as much light as the floor above due to the slope of the site.

The house embodies the landscape, its colours matching the black-spackled bark of the surrounding birch trees (and winter snow), the yellow-orange of their inner bark echoing the wood stain inside. Colour and material choices had to conform to the project’s budget. “The budget meant that we had to make a careful choice of finishes,” says Frappier. “That is probably why artifacts from Quebec endure very well over time. When you play with a limited budget, architects look to the essential and learn not to overdesign.” 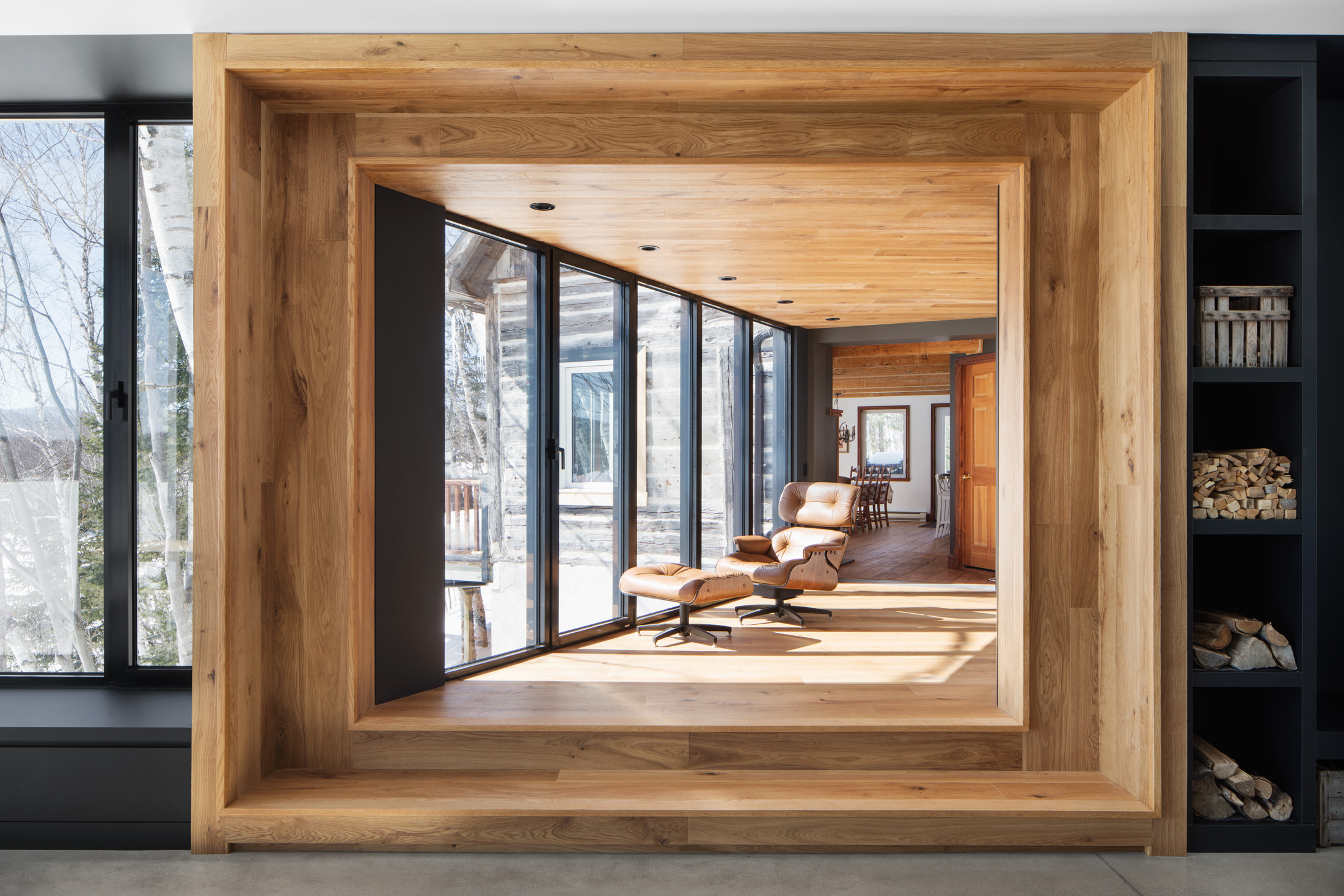 The transition from the old house to the new one takes place on a glass bridge. In general, the addition makes the original house more spacious, but the architect wanted to retain the human scale of the existing house and maintain a strong visual connection between the two buildings. “The house is broken into two volumes. But cooking at the island in the existing kitchen,” Frappier says, “you can see through the bridge, into the living room in the extension, so that the family feels connected.”

Shaped like a funnel that tapers toward the original building, the bridge (like the extension itself) captures the best light and views. The acute angle of the bridge—along with the angle of its wooden floor and ceiling planks, which run diagonally to the glass walls—contributes to this subtle sense of tectonic variegation. “There are no walls parallel to each other in the bridge,” says Frappier, “and neither of the two walls are perpendicular to the existing building. I wanted to create an awkward connection that creates a bit of movement, so that when you walk in, you are in a space where you feel that your orientation is challenged.” 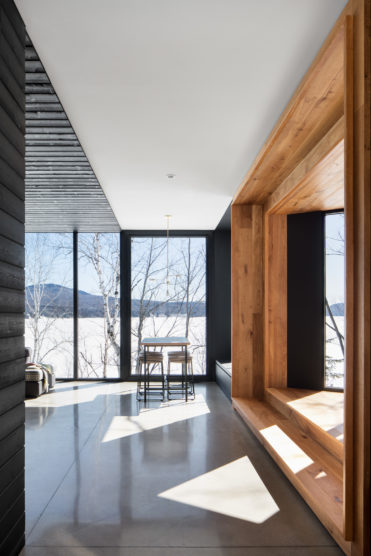 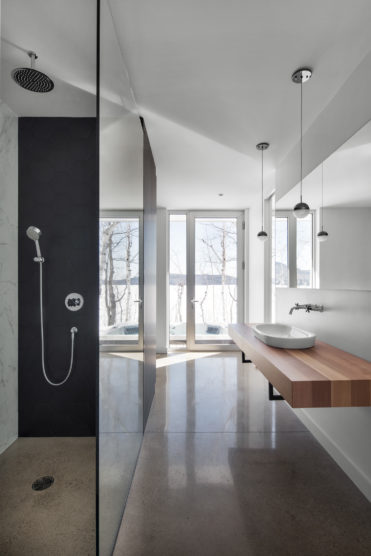 The bridge is also spacious enough to lounge in, a room with glass walls that hovers over the garden. “It is the best space in the house,” the architect says. “Sitting there, you feel as if you’re in the middle of the outdoors. During winter, at night, when you have a storm, it’s crazy. Light from inside catches the snowflakes. You feel as if you’re experiencing the storm, but you’re in a cozy, well-heated space.”

The dramatic oak trim that frames each end of the bridge—the kind of frame that would hold a beloved family photo, but much larger—is another detail that emphasizes the connection of the houses, as well as the connection of the families. Altogether, it is an architecture that respects the past while looking forward. Muses Frappier, it is “a new dynamic for a new family.”