Scroll through the Instagram account of architect Rafael de Cárdenas and you will find images of shadows shifting over walls, raindrops quivering on an airplane window, Grace Jones, the flawless grid of a white-tiled swimming pool by Alain Capeilleres, Shiro Kuramata’s 1987 interior for the Issey Miyake men’s store in Tokyo, and a 1970s TV ad for Fendi directed by Jacques de Bascher.

For a person with a distinctly savvy style, however, de Cárdenas designs not style, but atmosphere. He imagines charismatic spaces, drawing on and synthesizing from prolific sources of inspiration elements that are simultaneously elegant and camp, earnest and over the top, authentic and artificial. His New York studio, Architecture at Large (RDC/AAL), can construct layered spaces full of strong shapes and dynamic shifts of material and colour, but it is also able to draw a white-box gallery or kit out a residence that might be mistaken, on first glance, for contemporary classic. It is precisely because his work is so diverse that his body of work seems to strike a balance: even as it postures, it is pragmatic and, in its most pragmatic forms, can feel ostentatious. 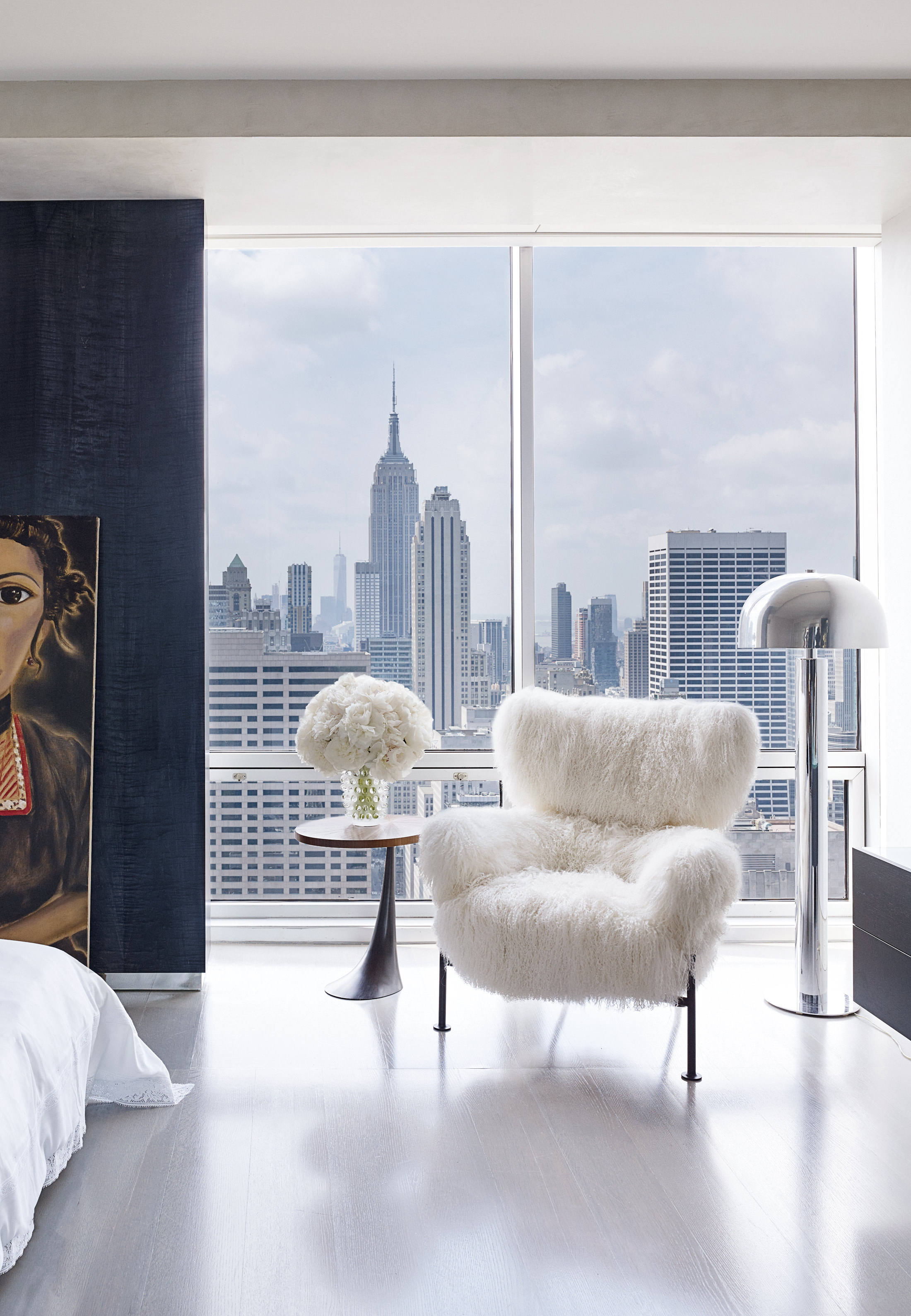 In an essay for de Cárdenas’s first monograph, which was published by Rizzoli in early October, Jesse Seegers, a multidisciplinary spatial practitioner and associate editor for digital projects at Columbia University’s architecture school, writes that the designer transforms “irreverence into perfection.” The book, timed to the studio’s 11th anniversary—celebrating the first decade of de Cárdenas’s work—is not a chronology; instead its chapters are defined by four moods and four films (The Hunger, Dune, Pee-Wee’s Big Adventure, and Flashdance), interspersed with short texts by thinkers like 18th-century philosopher Edmund Burke and New York Times architecture critic Herbert Muschamp. The book confirms that de Cárdenas is a thinker of great feeling, a description that recalls a photo of him as a curly-haired toddler: he is wearing a T-shirt with a drawing of two kittens, his eyes looking deeply into the camera just as the camera is looking into him, on his face a defiant expression, one of innate courage, that he still sometimes wears today at the age of 43. 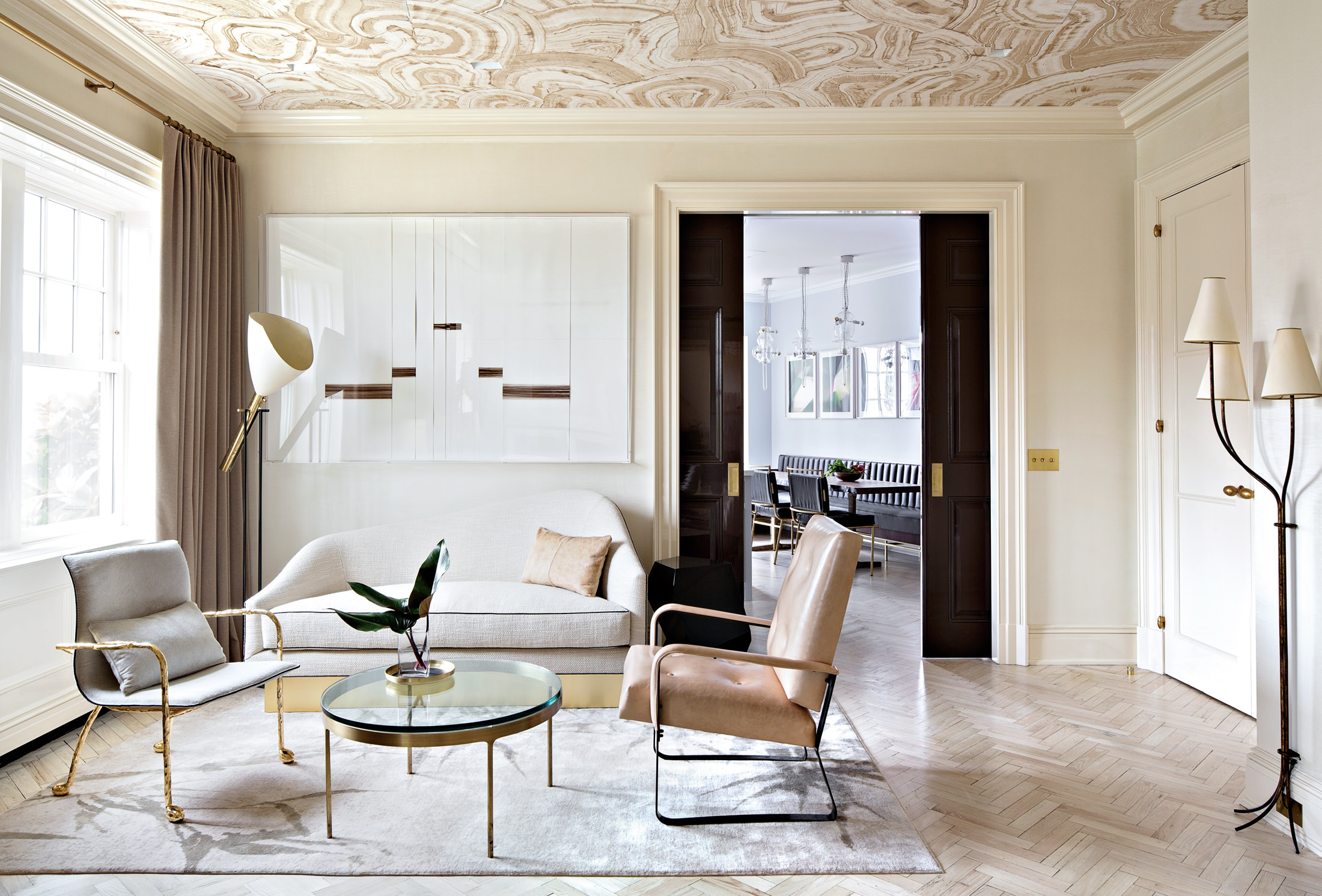 At first, de Cárdenas caught people’s attention with temporary spaces—for Cappellini, Barneys New York—built from off-the-shelf materials like streamers, tinted cellophane, packing tape, and a pop sensibility. For the first iteration of the OHWOW Gallery Miami, the space was a white box threaded with black silicone lines that converged in a corner and then thrust out from the wall to form a honeycomb of shelving for art books, the only source of colour in the composition.

Rafael de Cárdenas starts with broad conceptualization and arrives at the details through intuition and experimentation.

Early retail and cultural interiors often featured untethered mixes of material, colour, light, pattern, and texture. For Tony Goldman’s Miami creative incubator, de Cárdenas camouflaged a warehouse in black-and-white dazzle graphics. Between a terracotta tile floor and white walls, Cape Town clothier Unknown Union became a riot of cubes stacked into ziggurats. For New York’s Johnson Trading Gallery, he designed an equally colourful and severely angular collection of furniture pieces with Frank Lloyd Wright and Bruce Goff in mind. With these projects, de Cárdenas and RDC/AAL captured attention because he was trying to capture attention; anyone who thought that these self-consciously commercial projects would predict the future was mistaken. 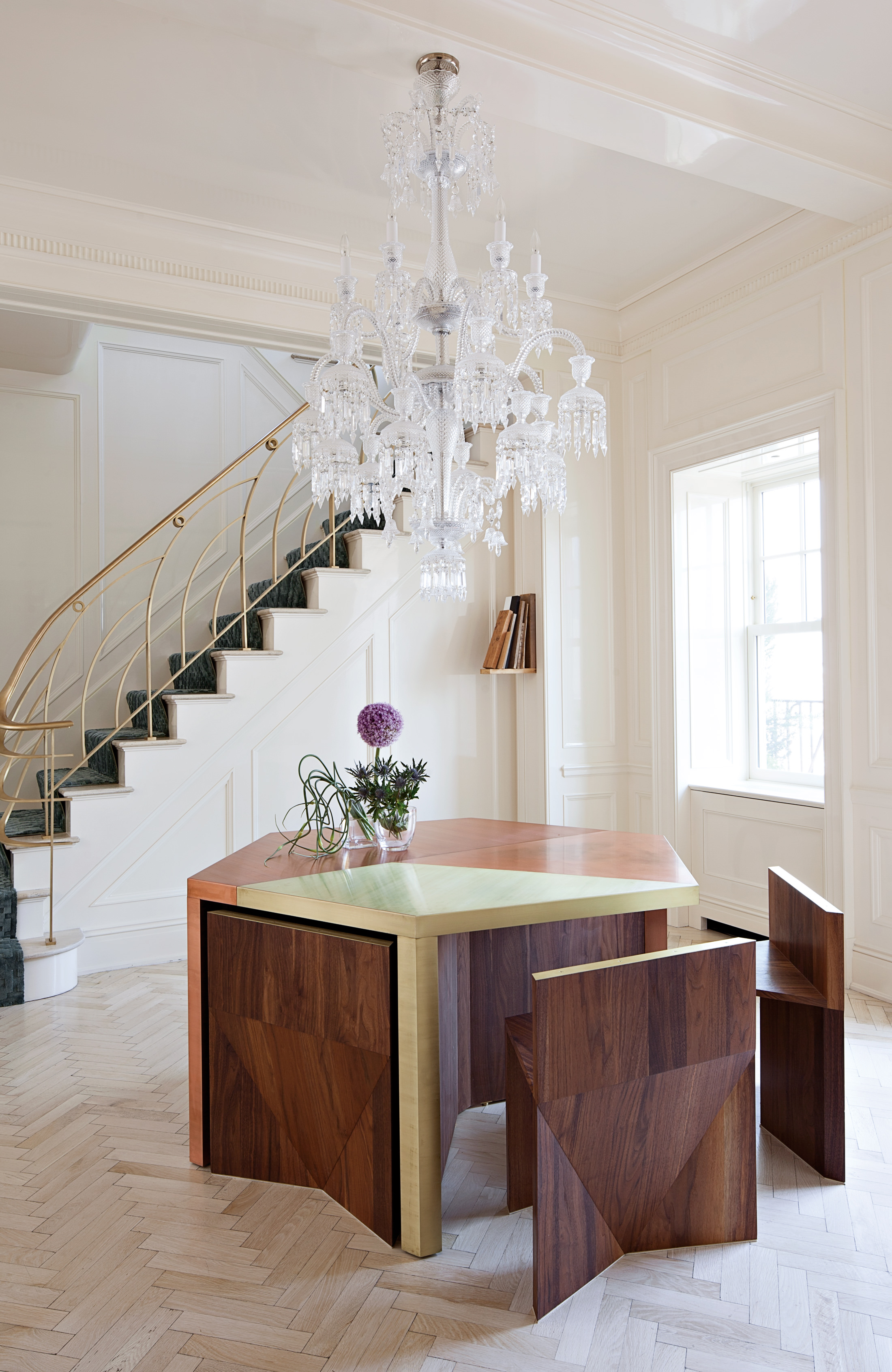 De Cárdenas is a cultural omnivore, one who consumes fashion, music, and the sets, costumes, and soundtracks of films: 9 1/2 Weeks, Madonna’s reality show harbinger Truth or Dare, the Jennie Livingston documentary Paris Is Burning, about New York’s queer ballroom community of the 1980s. He reworks these vintage themes into avant-garde form and space. These were cultures that were new when he was growing up in a Manhattan of nightclubs like the Saint and the Limelight during the AIDS epidemic of the late eighties and early nineties. In the monograph, Seegers links de Cárdenas’s camp creative qualities with the “art of drag”—articulating something true through an expression of savvy, self-conscious contrivance.

De Cárdenas’s parents, a Cuban businessman and a Polish-Swiss fashion publicist, came to New York together in the 1960s. Their son grew up in Midtown West, painting, sculpting, drawing, doing woodworking and glass blowing, and taking photographs while living with his fashion-forward mother, making clothing another medium for experimentation. “In high school, I was wearing weird shit,” says de Cárdenas, who recalls a club kid phase, a raver phase, and a “hippie-preppy” phase when he would wear a Guatemalan vest with Top-Siders. The city became a well of discovery: “I thought I lived in the coolest city in the world,” he says. “And it probably was at the time. It was this big culture maker, a culture extruder, and I always wanted to be downtown, to be part of that.” Toward the end of his sophomore year, with the Gulf War on, he joined Students Against War, where he met his first boyfriend, with whom he later joined ACT UP. “In high school, I liked to be controversial for the sake of being controversial, and my parents kind of encouraged it—[the idea] that I had this unique perspective.” 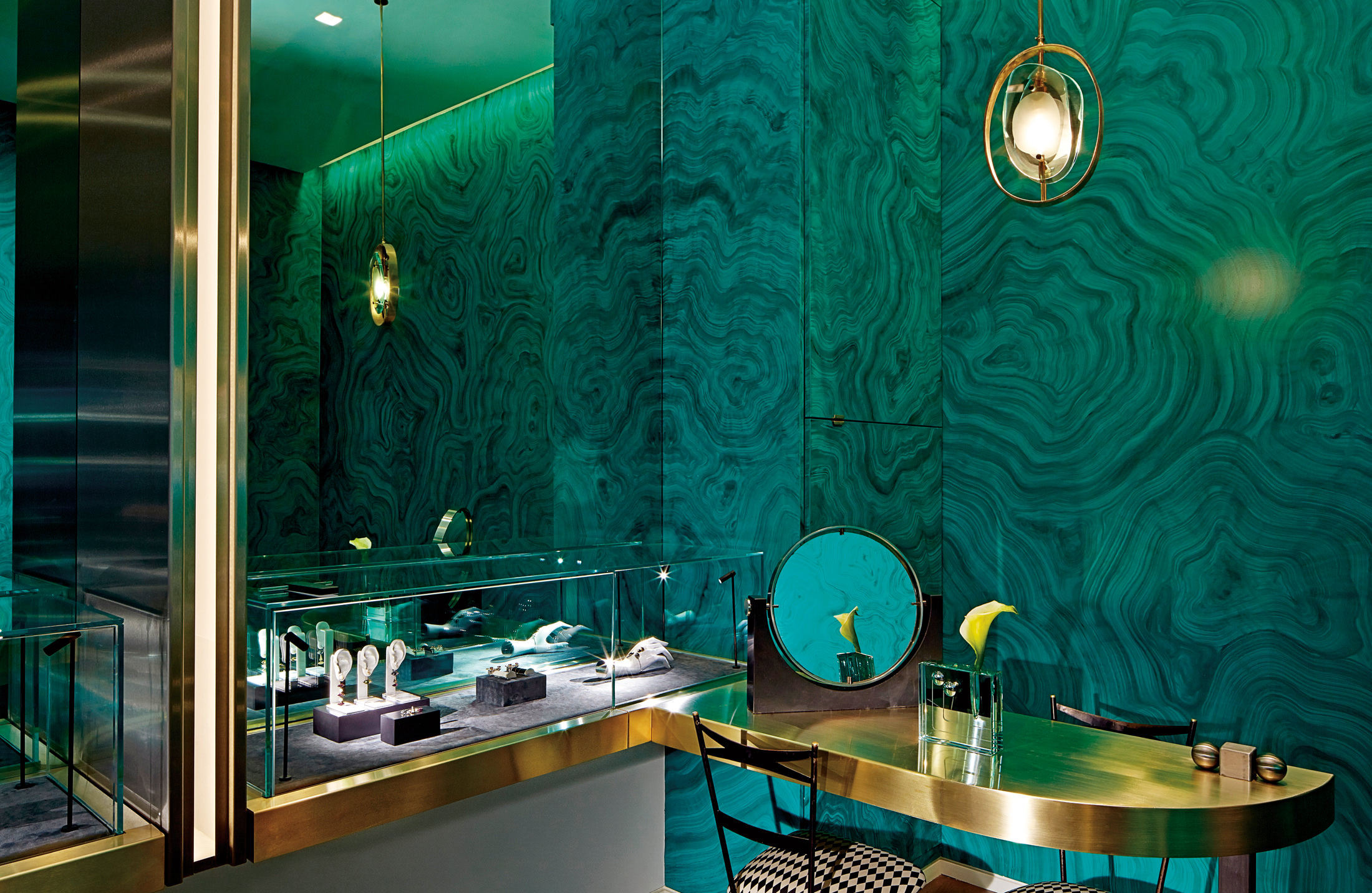 He also liked to break the rules: “I liked the idea of being an outsider, and that’s one of the things I liked about being gay. I was guaranteed to be an outsider and that was cool.” Somehow, though, he was never as outside as he had expected: “As I’ve aged, gay culture has become a lot more mainstream,” he says. “Today, gay people say, ‘Look, we’re just like you.’ The gay community wants the same things that the straight community wants, and I find that a little disappointing. At that age, I thought, ‘I am so happy that I am not just like you.’ I was defiant about it. Sometimes I miss that [outsiderness].”

In 1996, de Cárdenas earned his first degree in painting and fashion design from Rhode Island School of Design and went to work for three years as a men’s collection designer at Calvin Klein. In 1999, however, he returned to school at Columbia University and then UCLA to get a master’s in architecture, studying under architecture critic and historian Sylvia Lavin. Lavin offered different perspectives on ordinary details, suggesting that big movements like transcendentalism could be understood not just as a collection of histories and philosophies, but felt as emotions and moods, or that a material like glass was not so much transparent as reflective. Graduating in 2002, he began a year-long stint at Greg Lynn Form, the studio run by Lavin’s husband, architect Greg Lynn, only to be poached by special effects production house Imaginary Forces to creative direct experience-design projects. Eventually, he began to moonlight with his own projects and, in June 2006, hired his first employee. By November he had incorporated, and within five years he was appointed to French crystal company Baccarat’s first board of advisers, tasked with helping to guide the brand forward.

“I think I resist style and employ what’s appropriate.”

Today, while he hasn’t designed clothes in more than a decade, de Cárdenas still thinks about shape as discrete from materiality, a habit in garment design when assigning fabrics to each style. He starts with broad conceptualization and arrives at the details through intuition and experimentation. “I think that I resist style and employ what’s appropriate,” he says. “My ultimate aim is to be as contemporary as possible without using contemporary elements to reference that. I’m often looking to the 1980s [for inspiration] because that’s the era when I formed my stylistic proclivities, but at the same time, the ’80s were a kind of sampling from art deco and from the 1950s, so I’m [also] looking at the ’50s and art deco. It’s like a recipe: at the end, nothing should read as thematic; everything should read as a whole. I’d be disappointed if you could read my references in my spaces.”

Indeed, his references, and even his work, are usually difficult to identify. Demisch Danant gallery in New York is essentially a white box optimized for design display, while a proposed virtual space for Dornbracht bath and spa fixtures interleaves the classic and the contemporary, marked by only one quality that de Cárdenas considers part of the studio’s “bag of tricks”: a choreographed filtering and diffusion of light that generates atmospheric shadow play.

Then there’s the Goodman residence, also in New York, which is uniquely outré, each room imbued with a dramatically different mood: a silver dining room, a hot pink study, a fuchsia and lilac and faux crocodile living room, a bedroom filled with fur rugs and peony-print Mylar wallpaper. Each threshold reveals a contrast of furnishings, surfaces, and unlikely patterns and hues, and yet nothing unlikely—or unlikable—is ever irredeemable in de Cárdenas’s interiors. Every quality has a role to play: he actually dislikes fuchsia, but he exploited its “tackiness” in combination with the boxy furnishings around it. 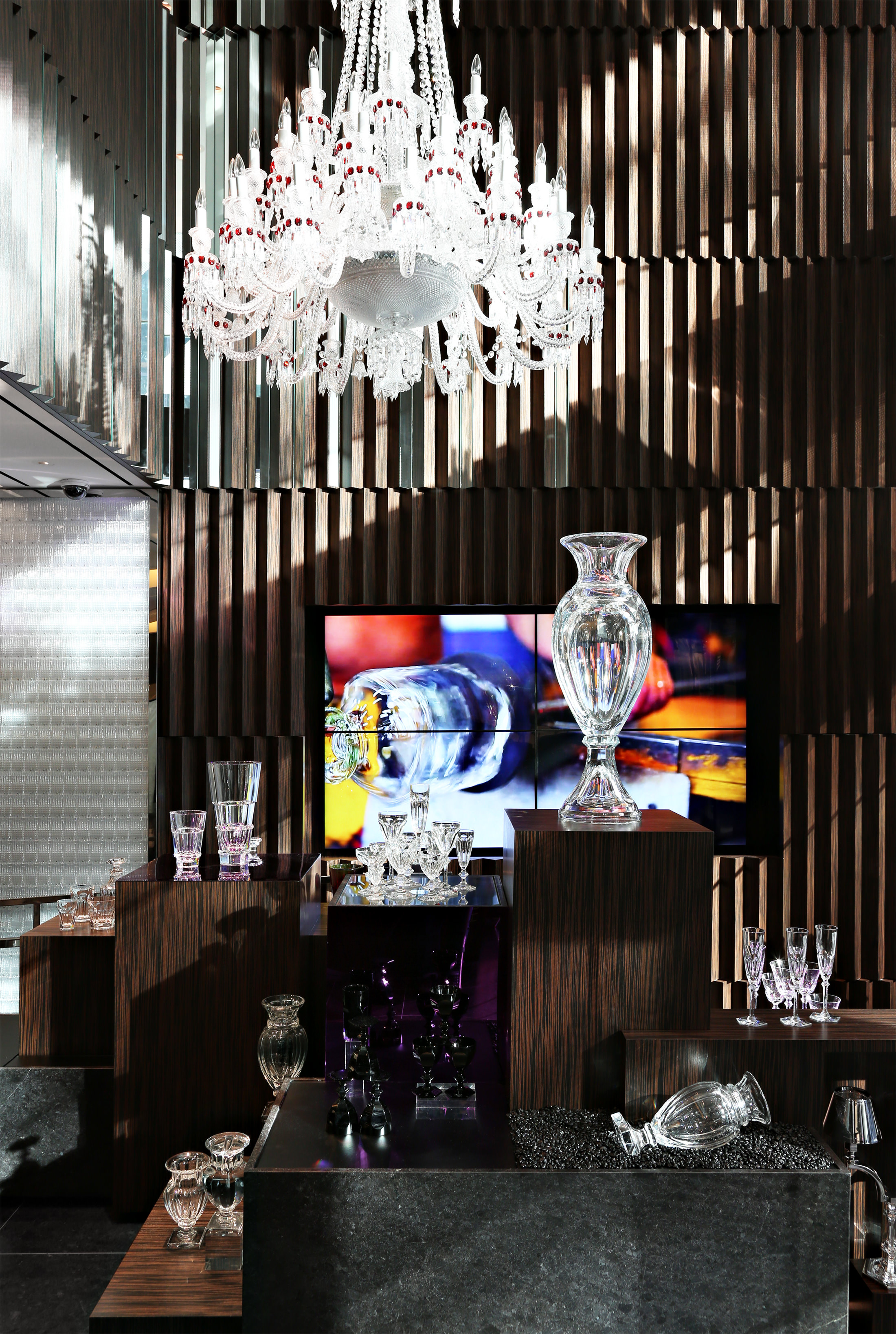 RDC/AAL recently designed a second Paris gallery for Balice Hertling north of the Marais that opened this fall. Contrary to convention, de Cárdenas located the front desk upstairs, returning the emphasis to art instead of commerce. “What I really like about Rafael is that he is interested in popular culture in a way that is not commercial or speculative. He lives surrounded by art in a physical, intense way,” says the gallery’s Daniele Balice, who was impressed by de Cárdenas’s familiarity with contemporary art, his close connections to the downtown New York art scene, and the studio’s work on projects like Nike’s 45 Grand showroom–cum–fitness space. “Rafael is some sort of Renaissance man, who knows a lot about a lot of different things, from fashion, music, art, and food to underground and queer cultures. He digests all of this information and reorganizes it through his work with a precision that is rare to find.”

This winter and spring, RDC/AAL expects to complete a spate of projects, including residences in Geneva, a country house in France, a yacht that is being fabricated in Italy, and collaborations with Nike, Glossier, and Kenzo, among others. “I suppose I make my own luck by putting myself in the line of fire as often as possible,” de Cárdenas says. “I started out thinking as an artist and, in some respects, that never went away.” The Art of Architectural Photography With Ema Peter