The name the Rug Company, speaks volumes about the straightforward nature of its mission. Having collected rugs in the Middle East during the 1980s and ’90s, its husband and wife founders, CEO Christopher Sharp and creative director Suzanne Sharp, hung out their shingle in London’s Chelsea neighbourhood in 1997. They have been adamant in their pursuit of quality materials and cross-disciplinary creativity ever since. 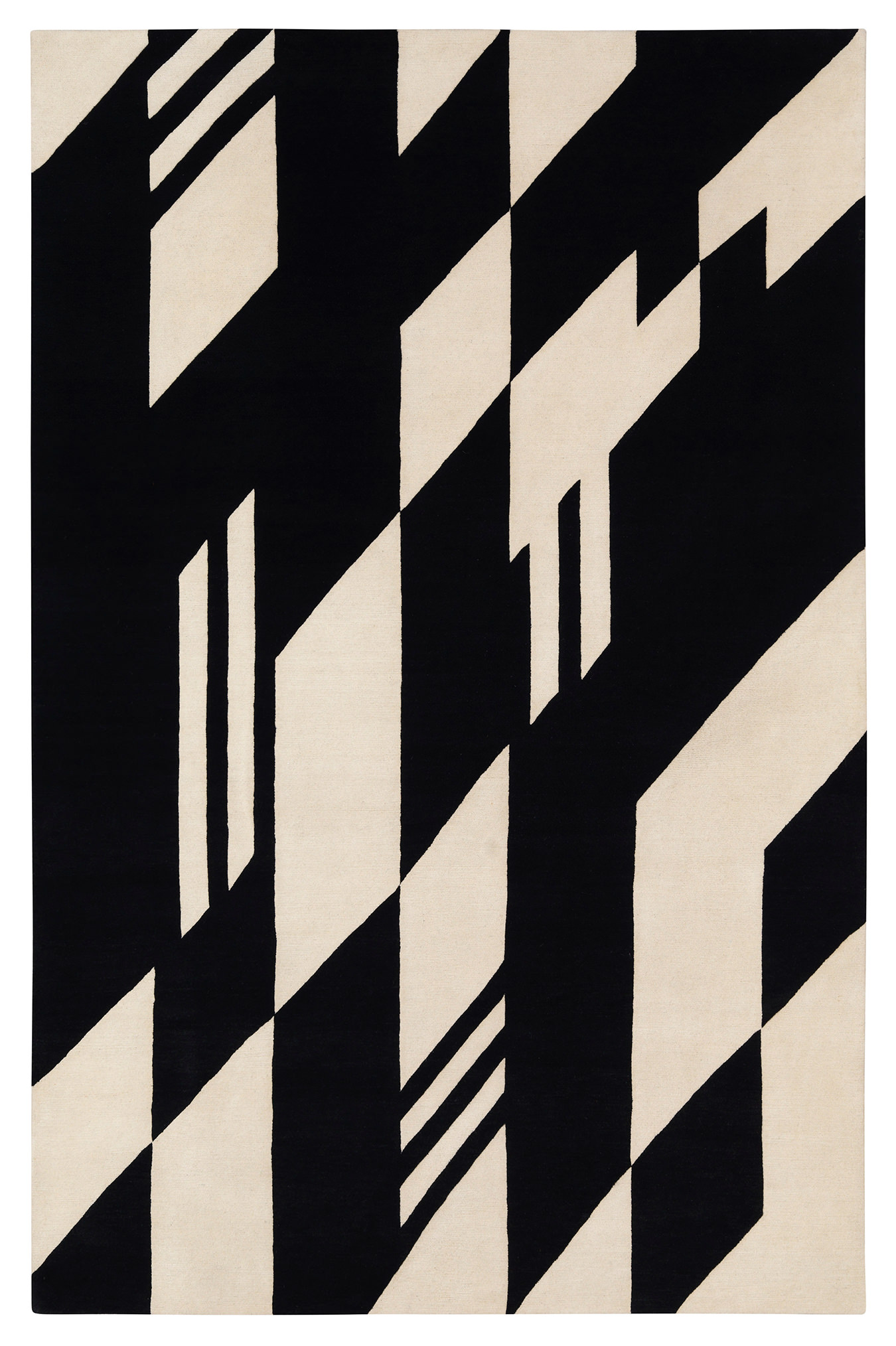 Umbra by Paul Smith for the Rug Company.

From zebra stripes to symmetrical pastels and dark asymmetries, the Rug Company’s collection has come to include pieces by top-drawer designers plucked from disciplines outside the textile industry proper. These include fashion designers Diane von Furstenberg, some of whose vintage wrap-dress patterns were translated into rugs, and Vivienne Westwood, who has contributed pink and orange plaids, painterly Union Jacks, and a rug called Rubbish. The company has tapped the aesthetic of industrial designer Tom Dixon and the shapely, colour-saturated minimalism of product and furniture studio Barber Osgerby. Fiona Curran’s bursting shards of colour hang alongside Suzy Hoodless’s whispering Malachite pattern that’s so pale as to be barely there. And this November, several pieces by Sarah Burton were added to the Rug Company’s Alexander McQueen collection. In a rose-petal colourway and a vamping scarlet-on-black version, Burton’s Poppy wall hanging exemplifies the Sharps’ uniquely versatile take on the handmade contemporary rug.

The pair launched their ongoing Designer Collection in 2000. Thirteen years later, having grown into 24 showrooms, it has become an emphatically international success. The designer collaborations certainly make good marketing campaigns, but they are more practical than that. “We are interested in collecting design rather than designers,” says Christopher. Working with designers in textile, product, and fashion gives the collection a variety of perspectives and expertise to draw on.

The Sharps never give a particular brief to a designer. They have produced stripes with fashion designer Paul Smith, for example, whose Swirl rug is one of the company’s bestsellers, but they also give Smith the latitude to not do stripes.

A new design usually undergoes a lengthy sampling process during which small areas are woven to see if the pattern and colours are translating correctly, all in order to make possible almost anything the designer wants to do. Rather than forcing a balance between neutral designs that sell in volume and niche or unconventional designs, the Sharps have found that balance comes rather naturally by having faith in the uniqueness and range of their collaborators’ creativity. 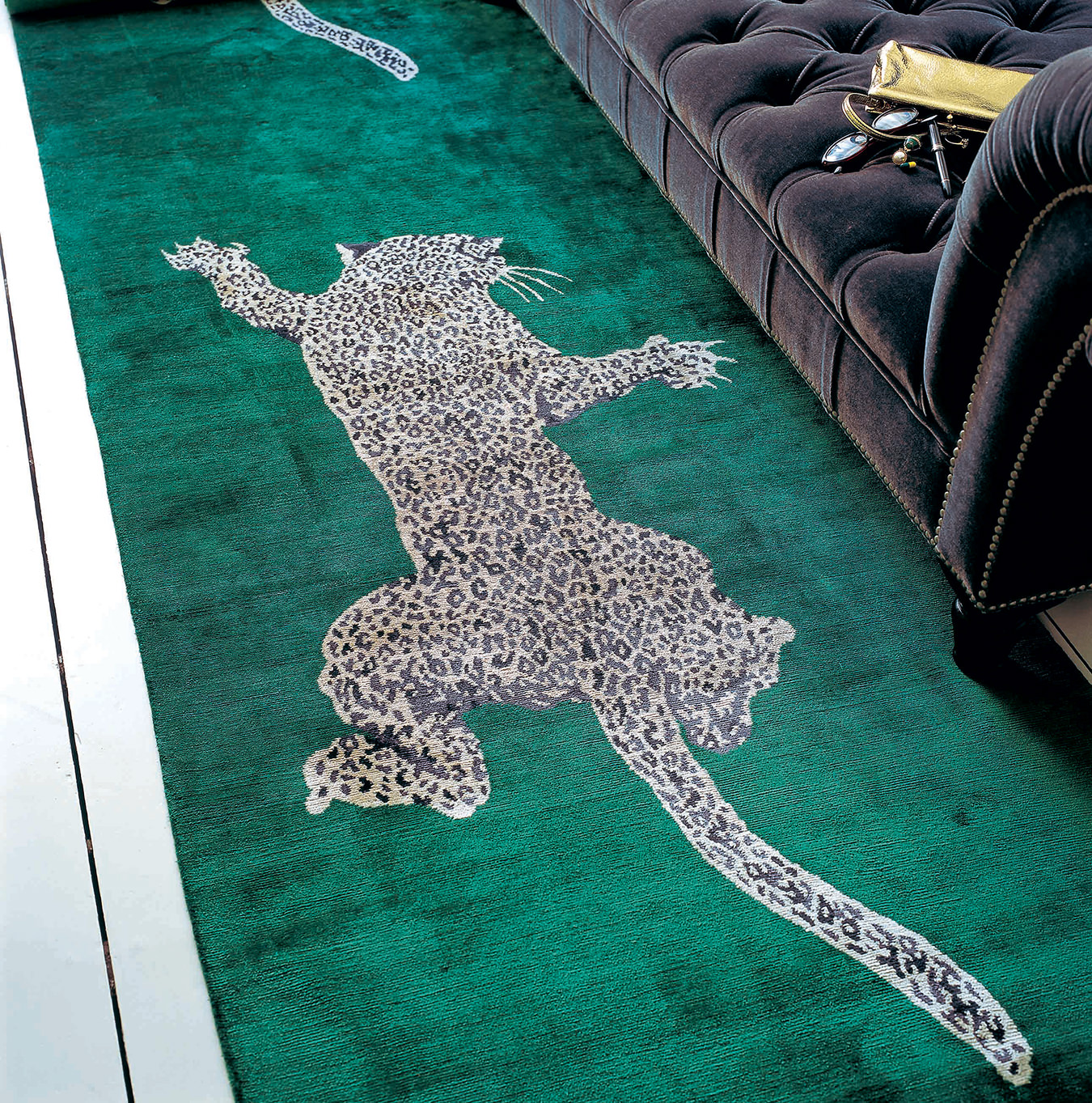 Climbing Leopard by Diane von Furstenberg for the Rug Company.

Christopher, born in Uganda, and Suzanne, born in Malta, were both schooled in England. He takes care of business, mostly, and she designs rugs, collaborates with designers, and directs the lushly styled catalogue that the Rug Company publishes every other year. Together, the Sharps’ emphasis has long been on values, as they have found that doing good tends to do them good, too: they insist on using only the finest natural materials, they’ve formed lasting relationships with artisans whose skills have passed through generations, and they’re certified by GoodWeave International, a non-profit organization working to end child labour in the rug industry.

Each Rug Company offering typically takes four months to knot. Weaving is done in several countries, including India, Turkey, and Morocco, with the preference being Nepal because of the superb high-lanolin wool unique to the sheep of the Tibetan Plateau. One rug represents the work of about 20 people, from the spinners of the wool and the dye master to the people who tie the thousands of individual Tibetan knots. This means there are 2,000 Nepalese on the Rug Company payroll in a republic short on jobs. “We would not have a product without the craftspeople,” says Christopher, “and the best way to support the developing world is with employment.” In the rug world, “you can always make something quicker and cheaper,” he says, but the difference between tufted or machine-made rugs and hand-knotted ones is discernible.