There can be a massive advantage to being the less-than-obvious choice. As with the underdog in sports, everyone is pulling for you to succeed, and the door is left wide open to make a great impression. In the automotive world, the same holds true.

There are some very obvious choices out there—cars that are the undisputed benchmarks and sales leaders in their respective categories. If you want to own the world’s best compact sedan, you pick the BMW 3 Series. If you need an executive sedan, you go with the crowd and opt for the Mercedes-Benz S-Class. If you’re looking for something in between… well, there are a few manufacturers that make a very strong case for class leadership.

The point is this: if the average well-heeled individual is in the market for a sporty and luxurious sedan, he or she immediately heads to the nearest Audi, BMW, or Mercedes-Benz showroom. But there are other options out there, and a new one in particular—the latest Maserati Quattroporte.

Introduced this past spring, this sixth-generation edition is the most compelling ever for the way it wraps very advanced engineering in a very attractive outer shell. This Quattroporte comes in three different flavours: a V6-powered rear-wheel-drive version (the S), one with that same engine linked to an all-wheel-drive system (the S Q4), and a V8-powered rear-wheel-drive example (the GTS). 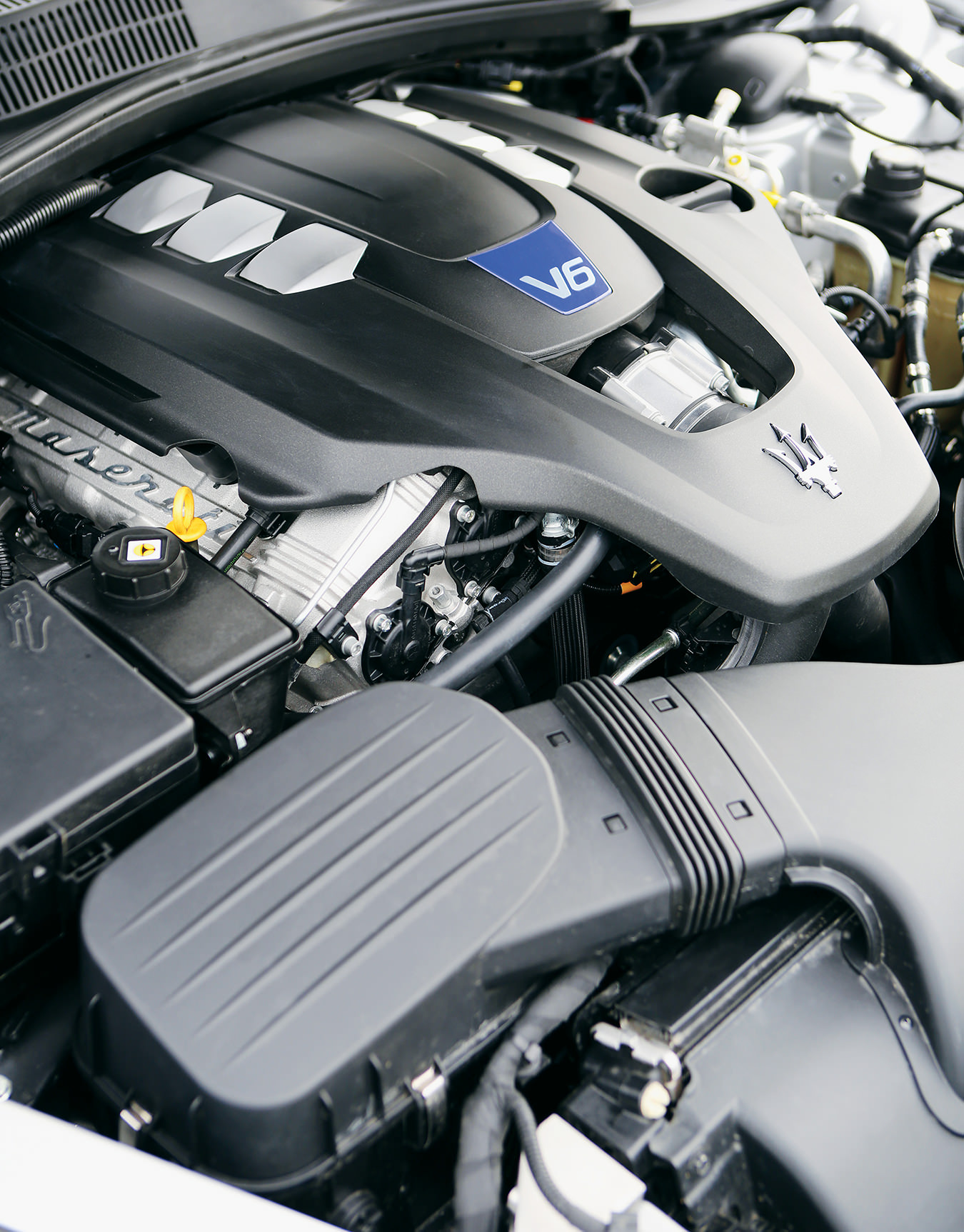 Both engines were designed, engineered, and built for Maserati by its corporate cousin at Ferrari, and both, as may be expected, generate healthy performance numbers. The twin-turbocharged 3.0-litre V6 (404 hp, 406 lb-ft) is one of the most powerful six-cylinder engines in the world, while the twin-turbocharged 3.8-litre V8 wrings out an eye-popping 523 hp and 524 lb-ft of torque.

Of the three iterations, the Quattroporte S Q4 is arguably the most interesting—it’s the first all-wheel-drive model in the Italian carmaker’s fleet. The demand for AWD has escalated around the world, particularly in markets such as Canada where the weather can take a turn for the nasty without much warning.

The location for my test drive is not at all susceptible to such conditions. The Circuito di Balocco proving ground, west of Milan, was built in the early 1960s by Alfa Romeo, and it has since been taken over by Fiat. The place is a network of test tracks and race circuits—80 kilometres’ worth in total, some of it meant to approximate real roads, complete with lane markings and stop signs. Outside the proving ground, there are some relatively open roads that are well suited to testing the Quattroporte’s mettle in the actual world.

Mettle, it has. Soon after getting behind the wheel of the Maserati, it is clear that this executive sedan has what it takes to compete with the very best in the business. The twin-turbo V6 powers the car from 0 to 100 kilometres an hour in a shade less than five seconds, quicker by a few tenths than the rear-wheel drive version. (Normally the weight of an AWD system would be a liability, but this speaks to the lightweight nature of the drivetrain and the advantages it has when it comes time to put the power to the ground.) While completing such sprints, the engine note builds to a seductive roar that compels the driver to keep the right foot engaged; tunnels in particular represent a very entertaining diversion.

The interior of the Quattroporte has all the latest technology, but it’s ensconced in a uniquely crafted cabin that echoes cars from the past. 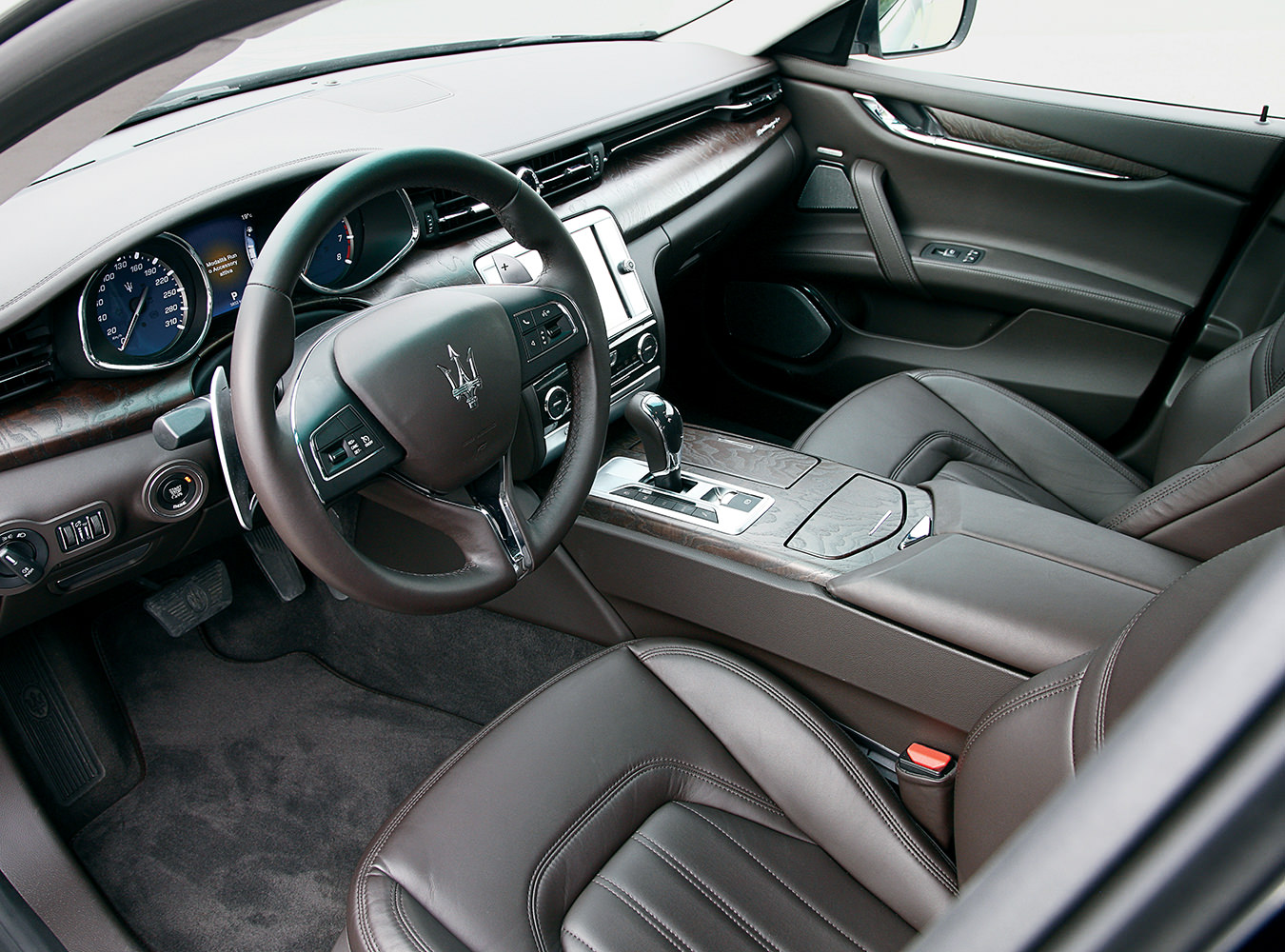 Whisking along the autostrada in the Maserati at over 160 kilometres an hour is a comfortable and effortless experience. The car’s eight-speed automatic transmission, supplied by subject-matter experts ZF, is a component shared by a number of luxury automotive brands. In the case of the Quattroporte, though, it has been calibrated for quicker shifts—40 per cent faster than in other applications, according to the manufacturer.

The AWD system maintains a 35/65 front/rear torque bias and is aided by a mechanical rear differential and a torque-vectoring brake system at the front wheels that has clearly been honed to a very fine point. The S Q4 makes very quick work of the corners at the test track, and in doing so, it displays a tendency to hang the back end out that few AWD cars can muster; this is what most identifies the Maserati as a true driver’s car.

Although the new Quattroporte is significantly larger than the outgoing version (166 mm longer, 63 mm wider, and 43 mm taller—making room in the lineup for the all-new Ghibli), there’s another more important statistic to ponder: the car’s curb weight has been reduced by some 100 kilograms. By comparison, the Maserati is longer than the brand-new Mercedes-Benz S-Class but still more than 100 kilograms lighter.

Inside, the Quattroporte S Q4 is a reflection of the car as a whole; it’s the unexpected choice and, more pointedly, the non-Germanic choice. The interior has all the latest technology, but it’s ensconced in a uniquely crafted cabin that echoes cars from the past. There are metallic touches here, for sure, but no faux carbon fibre or TFT readouts. The steering wheel—a focal point of any car, but one that so many carmakers manage to get wrong—is brilliantly executed. The shape of the bottom spoke of the wheel is a slick reinterpretation of the stem of the Maserati trident logo. This spoke is graced by brushed metal, which frames the logo, pressed beautifully into the steering wheel. 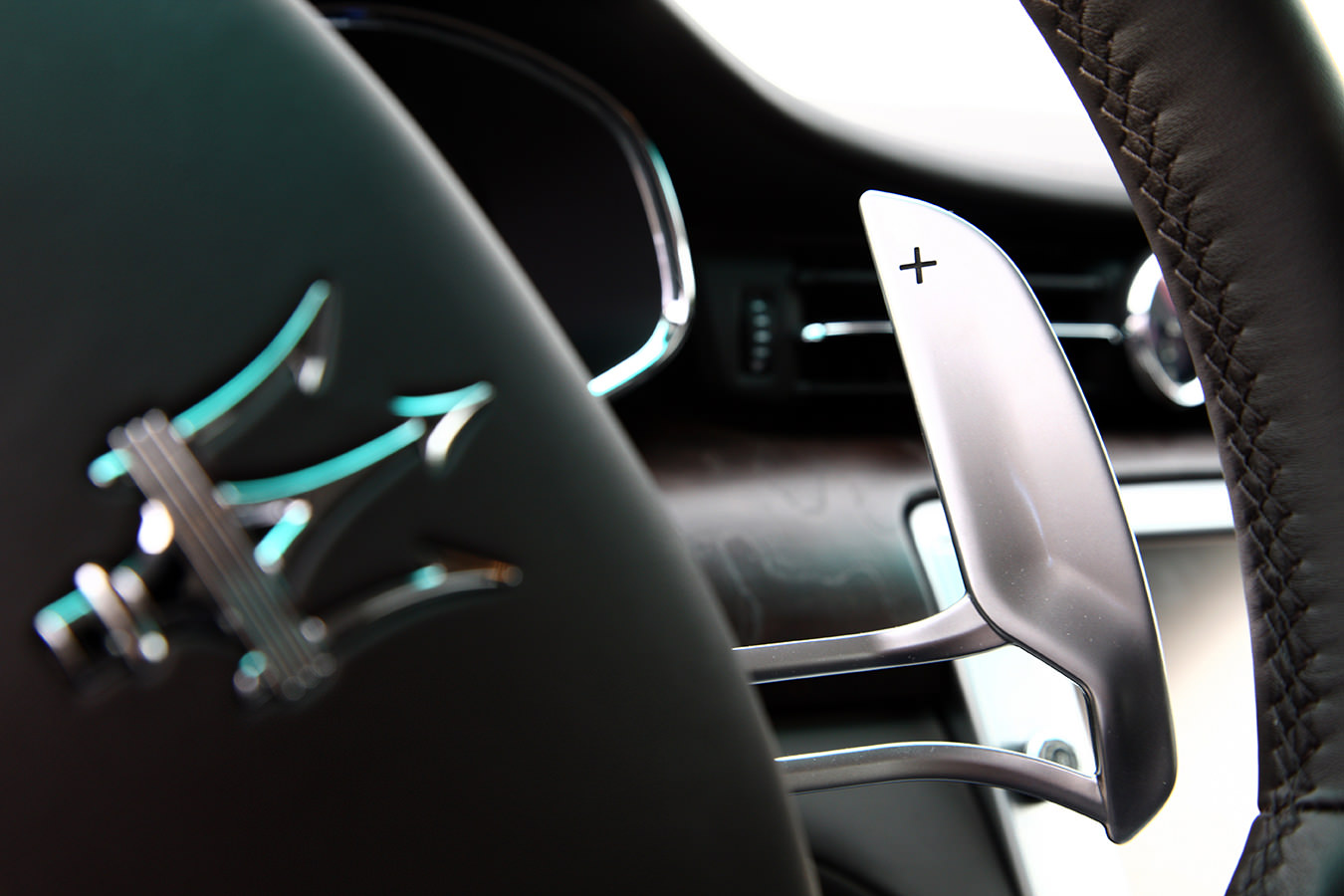 The centre console is dominated by a large screen that controls the key interior functions and displays the navigational maps. This layout and the metallic touches in various parts of the cabin are seemingly the only aspects of the interior design to acknowledge that the Quattroporte is a modern executive sedan. This does not mean to say that the Maserati comes across as staid or dated—far from it, in fact—but there’s a level of luxury here that seems from a different era. The gauges, dials, and vents are round, while the analog clock above the navigation screen is oval shaped. The interior materials are soft to the touch.

Of course, it makes sense that a luxury Italian automobile should possess plenty of style. But what is so surprising about the 2014 Maserati Quattroporte S Q4 is the quality of the engineering, specifically the AWD system, and how engaging the car is to drive at speed, especially around the corners of the Balocco test track.

Without a doubt, this combination of style and performance will soon draw attention from the Italian carmaker’s chief rivals for the executive-sedan customer. Some people might argue that an engaging driving experience is not necessarily a prerequisite for this class of car, but if you can pull it off without sacrificing comfort, why not?

During the launch of the car, a senior executive at Maserati projected that his company would sell 50,000 cars by the year 2015. Considering that the Italian carmaker moved a mere 6,300 cars globally in 2012, this statement seemed preposterous at best. Yet a few months after the introduction of the new Quattroporte, orders had indeed skyrocketed. Powered by its new executive sedan, Maserati booked some 17,000 orders during the first six months of 2013. The only rational conclusion is this: for many people, the new Maserati Quattroporte has become an obvious choice.