One word architects use all the time is place. Good designs, we hear, should relate to place. Buildings should be placed in context, an artful façade can help define place, and so on. In my experience as both critic and professional colleague of architects, the same applies to their public personas. The mannerisms and personal styles of architects can be just as place-specific as their designs.

East Coast and European architects have a talkier, more intellectualizing bent, dropping references to buildings and books, bragging about connections to powerful people and influential institutions. Things could hardly be more different for their professional peers in Hong Kong, where the talk is brief and all about business, efficiency, and teamwork to get the job done, with job being the operative word. In the northwest quadrant of North America, the personal styles of successful architects are distinct from both of these. Here, we want our architects to be clever—demonstrated as much with their hands as their tongues—but mistrust those who lead with a theory, a template, or a methodology. Yes, we want attention to the bottom line, but most of us feel that there are also other lines in buildings worth talking about and looking at. Most of all, we want our architects to be interested in the natural landscape, and in the good green world, with a passion for making it even greener and, well, good-er. 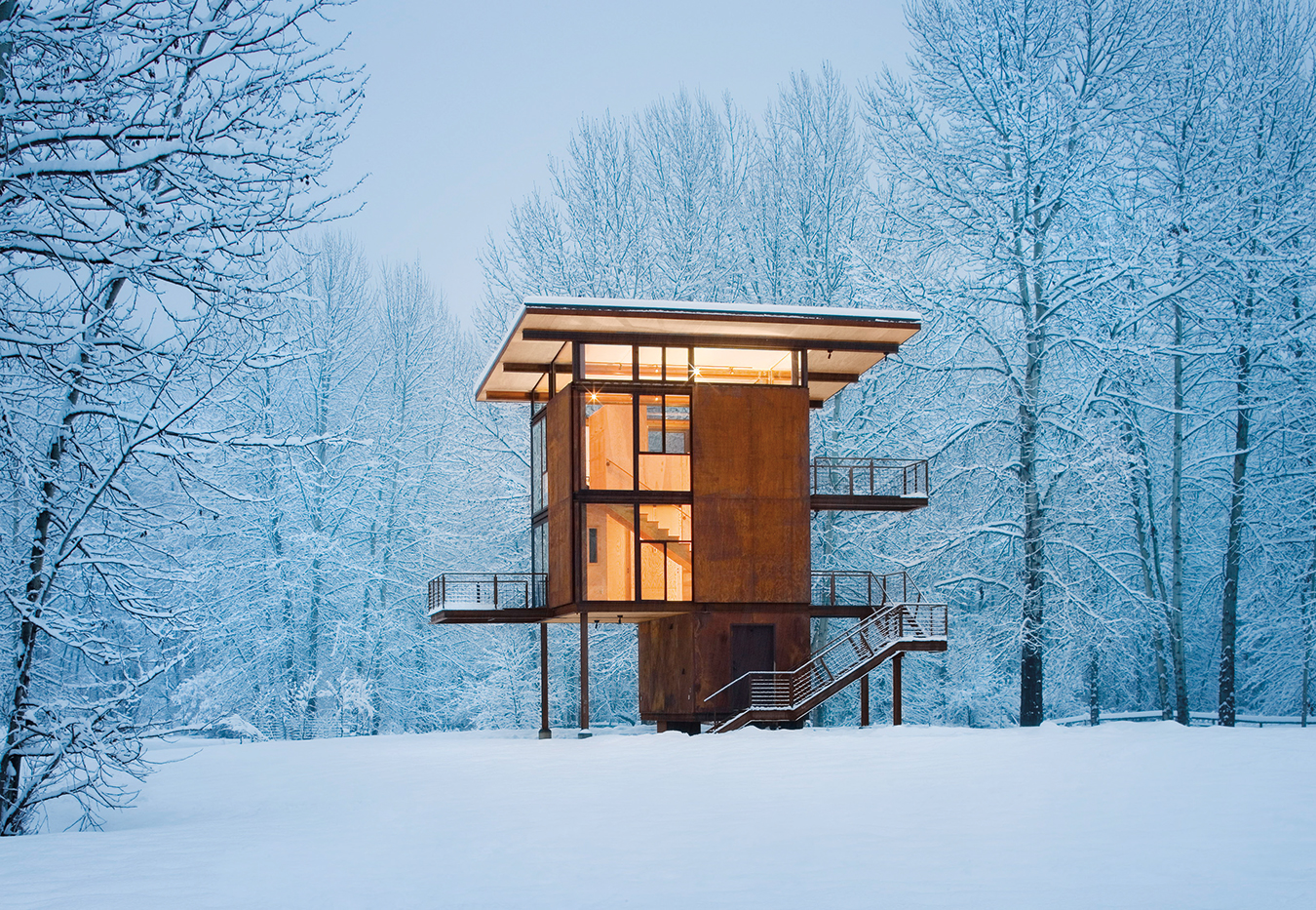 Seattle-based Tom Kundig may be the Northwest’s architect of the moment. When he drops references to books, they are not the works of philosophers or art historians so beloved of Harvard and Princeton grads, but Buddhist texts, or else that thoughtful maker’s manual, Robert Pirsig’s Zen and the Art of Motorcycle Maintenance. With a lanky and sinewy frame honed from decades of mountaineering, Kundig is as likely to talk about carabiners as Le Corbusier in explaining his designs, and he describes his apprenticeship to modernist artist Harold Balazs in hometown Spokane, Washington, as more formative than his early labours in architectural firms.

Kundig’s values and sensibility shine though in the 1998 Seattle Studio House he designed for artist Carol Bobo, the work that helped cement his reputation. The post and beams of this forest-wrapped hillside dwelling were rolled off steel mills, not sliced from trees, and the exterior is clad in metal sheets, not cedar shakes. Where many Northwest houses of this size and ambition might feature a front door of red cedar planks carved with vaguely Haida motifs, Kundig designed a massive two-storey affair made from a gridded pattern of rusting steel. But, this said, the textures, palette, interlocked spaces, and subtle response to landscape make this house utterly linked to place, and this place only, high above Puget Sound.

Tom Kundig is the region’s architect of the moment precisely because he does not do “Northwest architecture”, or at least not the woodsy, post-and-beamy version of it that has prevailed since the mid-20th century. Kundig’s palette tends toward raw concrete and shaped metal plate, not yellow cedar and stained glass. Unlike many of his colleagues, cute snapshots of log-built national park pavilions and the wooden vernacular of agricultural buildings are not lurking behind his conceptions. To understand Kundig’s work in this context of Northwest design, think of food: wild Pacific salmon is one of the finest natural foods anywhere, but a diet of nothing but salmon twice a day would be the definition of boredom. For decades, those with the means to commission substantive houses in this part of the world have been ordering little but cedar-planked sockeye.

Preparing the way for designers like Kundig, the whole Northwest style trajectory exhausted itself with the massive $53-million (U.S.) house by James Cutler and Peter Bohlin for Bill Gates on Seattle’s Lake Washington. It is not just that the house is huge—66,000 square feet, including an underground garage for at least 10 cars—but that it is fine in bits, but only adds up to more and more house, lacking spirit, or even a continuous theme. Kundig, by contrast, has spirit, maybe too much at times, and ditto for his use and reuse of a handful of spatial and architectural themes. He avoids designing the 30,000- and 40,000-square-foot behemoth houses beloved of Seattle’s other software millionaires, a specialty of partner Jim Olson. Kundig takes on the quirky, eccentric, and bohemian clients, labour-intensive oddballs whose changeable desires cost architects time, and time costs money. (He jokes, “Jim gives me the leftovers.”) Architecture critic Andrew Blum accurately describes their firm of Olson Kundig as “court architects for Seattle’s business royalty.” Olson thus gets the crowned heads, but Kundig gets the ambitious dukes, courtesans, provisioners, even jesters. Courtiers or not, it is working: Olson Kundig received the American Institute of Architects’s national 2009 Architecture Firm Award.

Some of Kundig’s most lauded works are his smallest. A number of them are collected together at the Wesola Polana Ranch, near Mazama, in central Washington state, not far from the Canadian border. The first of these is the Delta Shelter, and it is a study in contrasts with the Gates house. One is tiny, the other is huge; one builds up like a tree house, the other sprawls over a lakeshore slope; one has a varnished raw plywood interior, the other is crafted of the finest materials. Kundig’s Delta Shelter is a set of stairs spearing up through two tiny cabin floors, the entire construction having more in common with the Cascade’s steel fire-spotting towers than most people’s conception of a rural house. Proud like a warrior, the house is best seen at twilight in snowy mid-winter, with the glow of its plywood walls contrasting with the frosted hardwoods of the surrounding glade.

The other side of this grove is the location of a follow-up commission for the same client. These are a half-dozen rental huts that seem like forlorn little “hutlings” hunting around for their Delta Shelter mother, each resembling one of her floors, but baby-sized. Each hut is about the size of two large tents, but boasts built-in drawers and beds in that same rubbed plywood, with a deck capped by a long-browed roof that is held up by steel I-beams. And yes, each hut is set on oversized wheels, generating their name—the “Rolling Huts”—and a successful Internet marketing gimmick for their promotion as weekend getaway lodging for harried urbanites. 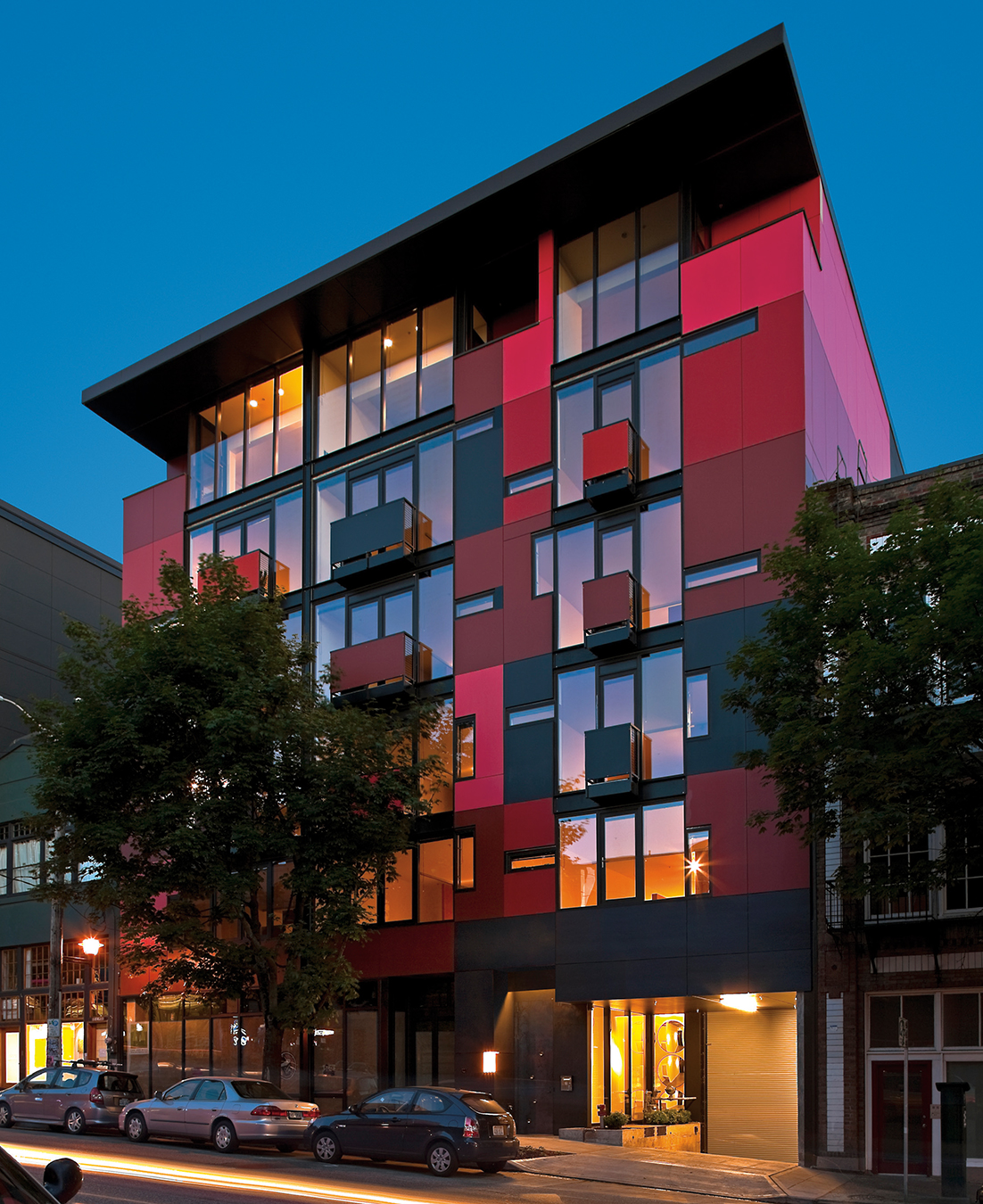 The bold colour on the boxy forms of the condos at Eleven Eleven East Pike is derived from automobile paint used in the 1950’s—this Capitol Hill site used to house an auto dealer. Photo ©Francis Zera.

Many Kundig projects feature a gizmo or visible gearbox or pulley mechanism; indeed, the majority of Kundig’s magazine citations have been earned by these obvious examples of what architects call “eye candy”. There is a practical reason for the wheels. Land-use ordinances permitted RVs here, and local officials would not approve unmovable dwellings. “[Our client] had a grandfathered permit for an RV park there,” says Kundig, “My original design didn’t have wheels, but with them on [the drawings], they couldn’t say no, which pissed them off.” Call them “Puny Plywood Palaces”, or even “Half-Wides”, but the built results are fun and ingenious, both visually and legally.

This tale of the triumph of quirky detail is classic Kundig—rangy bad boy with urban smarts goes rural, but with attitude. A visit to Olson Kundig’s Pioneer Square offices to talk about Kundig’s life and designs begins with his perfunctory demonstration of the hydraulic gizmo, powered solely by pressure from Seattle’s city water supply, that opens and closes a multi-ton skylight structure. Kundig was born in California, the son of just-arrived immigrants from Switzerland. His parents fell in love with the West, and soon relocated to Spokane, where Kundig grew up. His father was trained as an architect at Zurich’s prestigious ETH (the Swiss Federal Institute of Technology), and pursued a successful practice and mountaineering in eastern Washington. “I grew up in the mid-century modern tradition,” says the 56-year-old architect. “My memories are of small, intimate houses.” A contrarian at a young age, Kundig the younger refused to work for Kundig the elder, joining the local construction labourer’s union for summer work instead, and skiing at every opportunity. As a dedicated hard rock climber, he made a difficult winter ascent of Mount Athabasca, near Banff. “I’ve always felt at home in B.C. and Alberta, because they all understand how landscape gets into your brain,” he says. “You see it in the atmospheric music of Neil Young and Joni Mitchell—you cannot trump the landscape.” 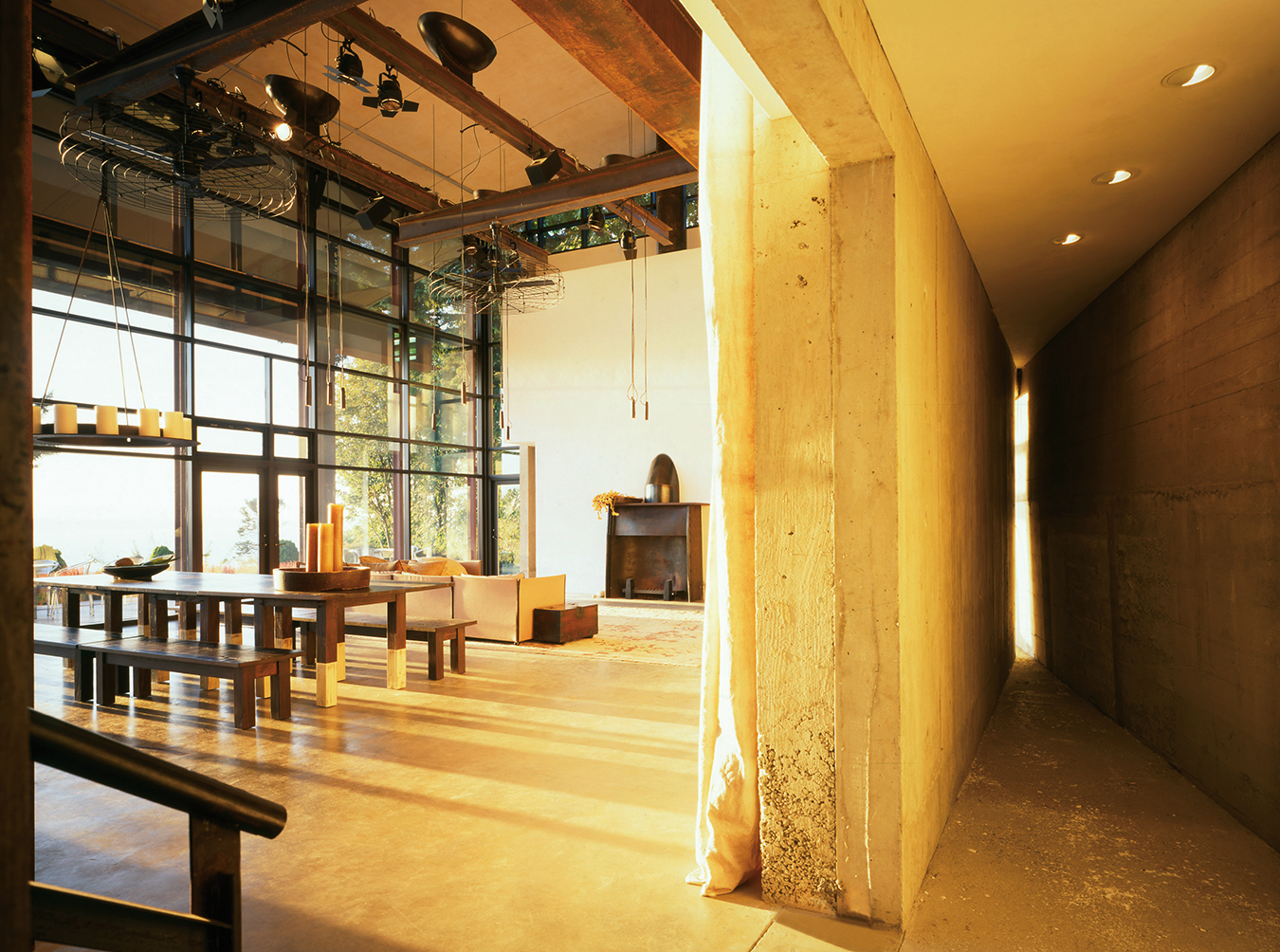 As staff, clients, and consultants pass by the open door of his firm’s rustic boardroom, I ask Kundig to describe his place in contemporary architectural culture. He states that, unlike fellow Washington native son and one-time design teacher Steven Holl (who is now a solo starchitect working globally from a New York base), he has dedicated his career to the Mountain West and his partnership with Olson. Kundig admires designers like Rem Koolhaas, who lead with ideas, but his craftsman’s values compel him to work another way. The architect is a little sheepish about the bell tower, pergola, chapel-like structure, and other California Mission–style elements insisted on by owner Anthony von Mandl for his Mission Hill Winery complex outside Kelowna, B.C., drawing attention instead to the metallic details of the sales room and concrete-framed underground wine vaults as better representing his own tastes.

Composing himself for a moment to explain how he thinks and works, Tom Kundig says simply, “I ski the trees.” Skiing the trees means improvising with terrain, snow conditions, and with tiny gaps opening and closing between massive conifers as they whip by—it does not lend itself to theorizing, applying precedents, talk, or templates. Skiing the trees means never letting attention slide or allowing attitude to get in the way of altitude.

Now that younger architects from the Northwest are producing even edgier versions of his designs, and now that a new cottage industry is fabricating Kundigian door- and window-opening gizmos for anyone, what new paths will he improvise down the architectural mountain? Without abandoning rural and suburban house commissions, he is carving a turn back to cities. He produced designs for a few high-rise towers at the end of the boom, but with the collapse of the American condo market, none have proceeded. However, two urban and urbane Seattle small apartment buildings have been finished. The first of these is Eleven Eleven East Pike, in the city’s über-hip Capitol Hill neighbourhood. Kundig says client Anne Michelson “did not want the usual—she wanted something special,” and, more challengingly, also affordable. The resulting layouts are efficient and the building’s shape conforms to the available zoning limits, so the only expressive device left at this budget was colour. Kundig found four shades from red to brown derived from car paint samples from 60 years ago. (The site was once the city’s automobile dealers’ row.) The original intention was that purchasers would pick one of these colours for their exterior walls when purchasing, but sales were slow, so he and his staff randomly composed the final checkerboard pattern, a striking presence in this colour-challenged city.

Affordability was less of a concern for Art Stable, a seven-storey loft project in the emerging South Lake Union neighbourhood. It boasts a concrete structure with elements of steel, allowing lots of glass facing downtown, Elliott Bay, and Lake Union. Art Stable’s gizmo is a rooftop crane that allows large artworks—or more likely at this price point, grand pianos—to be lifted up, then brought in through the openable 8-by-12-foot floor-to-ceiling windows. Art Stable defines Seattle’s new bourgeois bohemianism—with its arty panache of studio loft living in industrial aesthetic, all-new construction—but nonetheless boasts verve and livability. Being green these days means a return to the inner city, to mixing living with working in a walkable urban neighbourhood.

Cutting a new trail, Kundig has skied the trees right back into town. The next big thing in Northwest houses will most likely be an apartment in the city.