I first meet Omer Arbel at a coffee shop on East Hastings Street in Vancouver. The 45-year-old multidisciplinary artist and designer, best known as the creative director of Bocci, is sitting outside at a small table, dressed in black. As the caffeine from the coffee he’s enjoying takes hold, Arbel talks about the groupings of concepts that drive his work. His mind is fast and fluid, not unlike the fabrication processes that have catapulted the designer into the international spotlight. But Arbel would rather show than tell, and soon we are on the move, walking past craft breweries and boarded-up shops toward Bocci, his lighting design studio, in Railtown.

After graduation from architecture school at the University of Waterloo, Arbel apprenticed with architects Enric Miralles in Barcelona and John and Patricia Patkau of Vancouver’s Patkau Architects. While maintaining his day job, Arbel experimented with his creative output, tackling projects. Arbel’s now–business partner, Randy Bishop, took an interest in the glass-blowing work he was doing, and in 2005, Bocci was born. By merging a functional need for lighting with Arbel’s intense glass aesthetic, the company easily broke through the noise. Arbel’s glass pendant lights, suspended in chandelier fashion by coaxial cables, gained immense popularity; more than that, they became iconic, and now the design is one of the most recognizable pieces of manufacturing in Vancouver, and maybe the whole of Canada.

Arbel is not concerned with trends, and his recent work has stretched beyond lighting design into conceptual architecture and object design. “We make what we believe in,” he says. “There’s absolutely no concession to the marketplace or to research. We remain outliers aesthetically, yet somehow we’re thriving.” He knocks on wood; the knock has a deeper, metaphorical resonance with Arbel’s commitment to material—to the way it acts under pressure, and the gifts and surprises it bears, as it shifts and bends, as it flows with a mind of its own.

In the last few years, his experimentation with his team, both at Bocci and under his personal design umbrella OAO Works, has been crossing boundaries, eschewing the clean computer-generated lines of parametric design to get to the heart of the ways humans interact with tools and natural processes to create homes and art. Arbel wants to move past just guiding materials toward a preset goal; he wants to follow them into the furthest reaches of their potential and into aesthetic landscapes of forms not yet known. 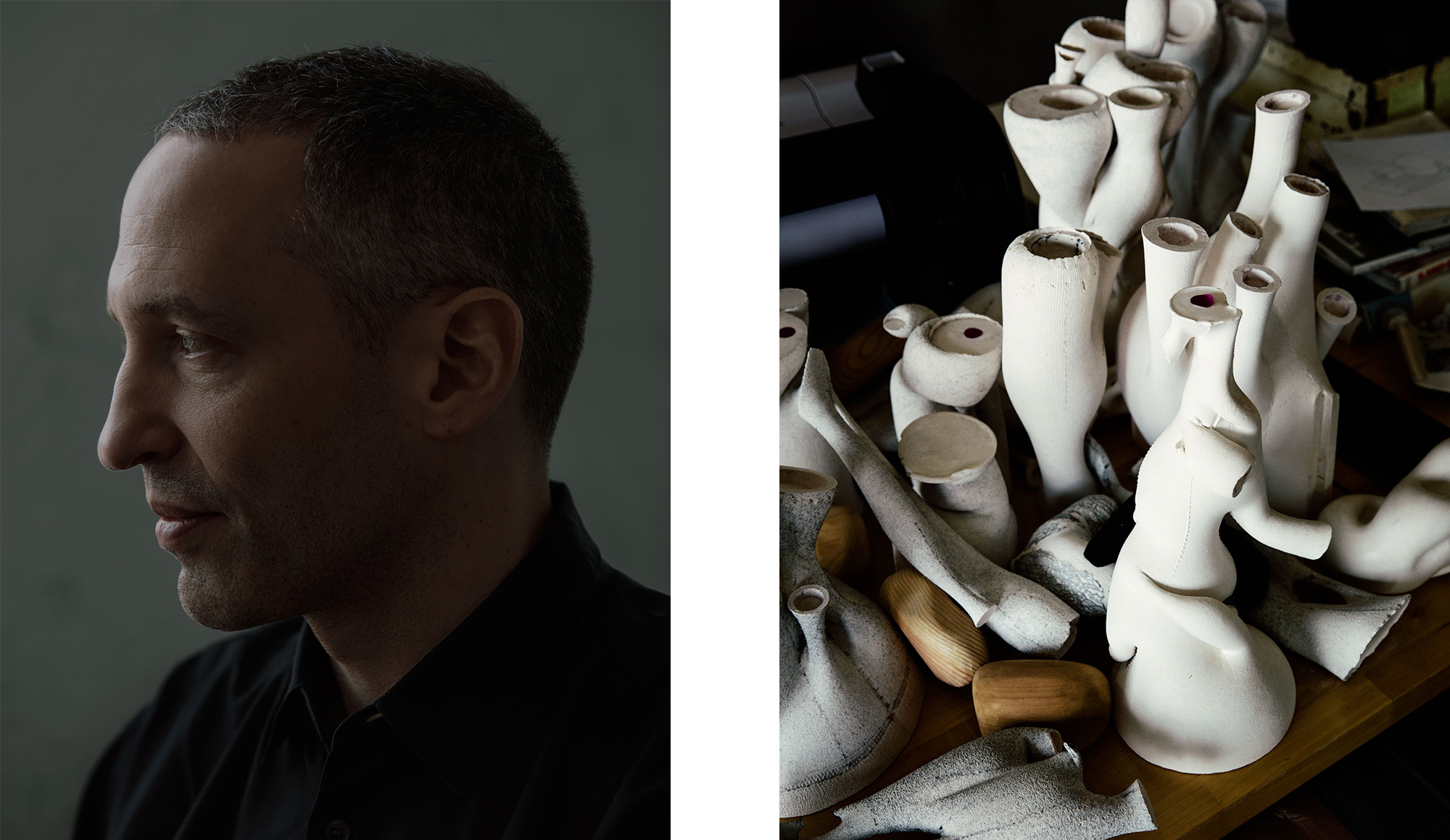 The latest work by Omer Arbel, best known as the creative director of Bocci, stretches beyond lighting design and into conceptual architecture and object design.

One recent experimental art piece, Project 113, features copper alloy poured directly into heated glass, which then shatters, leaving the cooled, formed metal in a vessel-like form that undulates plummeting liquid. The result is a vase; the process makes the copper seemed aged, recalling relics of the Bronze Age, perhaps similar to those found somewhere like Jerusalem, where Arbel was born, a place where metalworking and glass-blowing have existed for millennia. At 13, Arbel moved to Canada. This difference in place, between the cities of the Middle East and the deep woods of Canada, represents a certain alchemical shift in lived environment and a breadth of cultural exposure.

“I like forms that don’t come out of the author’s imagination but that take cues from chemistry and physics and mechanics of the immaterial,” says Arbel, who is very aware of the risk of nostalgia inherent in an approach that privileges a romanticization of the classic artisan’s connection with the material. To counter this, he notes that his collaborators are increasingly scientists, and his practice sits where the long tradition of craftspeople meets analytic and chemical approaches to the creative process.

In another of his latest works, Project 94, Arbel was commissioned to imagine a series of homes at Governors Point, a unique plot of land in Washington State. Instead of the ever-popular lofty cantilevers, Arbel plans to build dwellings that burrow directly into the seaside cliff. By requiring entry to the homes through the back, the design gives the visitor an impression of walking into a cave, an effect that Arbel says is meant to be uneasy but strangely human, oddly germane. Then you realize you are suspended over the cliff. 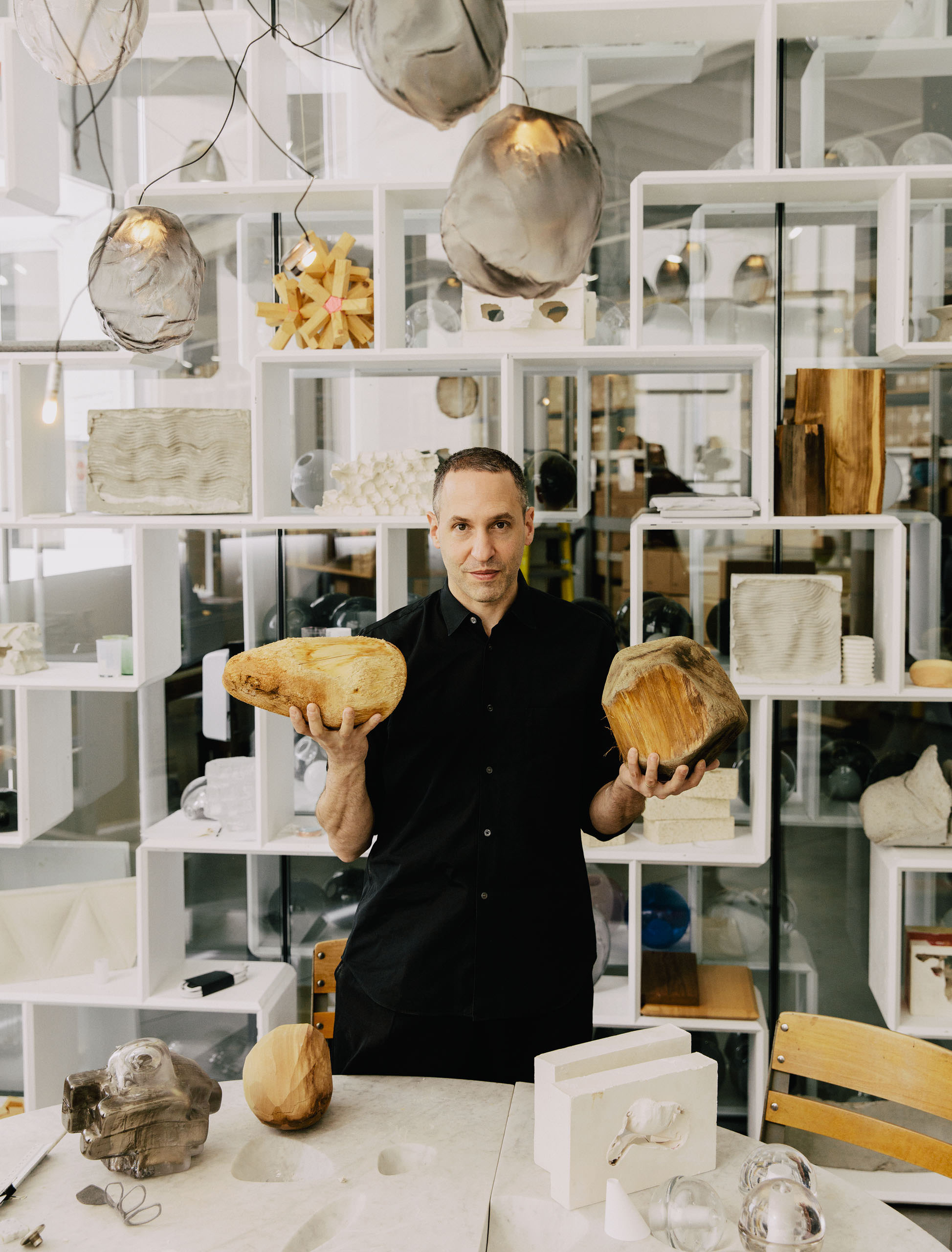 “So there’s this total disjunction. I like to think of it as a moment where you feel the uncanny nature of things: the juxtaposition of that feeling of being underground and then very rapidly being transported to a moment where you’re floating over the ocean,” Arbel says. And though the sublime or uncanny are often not associated with uplifting, cathartic art and design, they are important aspects of our relationship to the world and to living a fully realized life. “Architecture can find a way to provide a domestic counterweight to the feeling of the sublime or the uncanny so that we can make a nice house for it or live with it”—whereby accommodating the scope of feelings we have when interacting with the material world.

“I like forms that don’t come out of the author’s imagination but that take cues from chemistry and physics and mechanics of the immaterial.”

Outside, on the cliff face, Arbel will surround the outward-facing portion of the homes with wood balls made from the burl, or knotty growths, of trees that is then tumbled, smoothed, and suspended by rods outside. “In the beginning, it’ll be like a cloud of wood,” he says, “but over time the cedar will silver, as it does, and also lichens and moss will start growing over it, so we anticipate it to become a kind of green veil.”

Arbel’s fascination with the relic and with the uncanny digs deep into people’s primordial association with the substances and tools that shape lived environments. The cave, the swarm, the burl, the archaic aesthetic represent aspects of making and art that are not cathartic or romantic but offer an insight into the relationship of consciousness to the processes that animate, shape, and ultimately dissolve molecules. Things don’t have to be beautiful to be impressive or durable or spectacular. 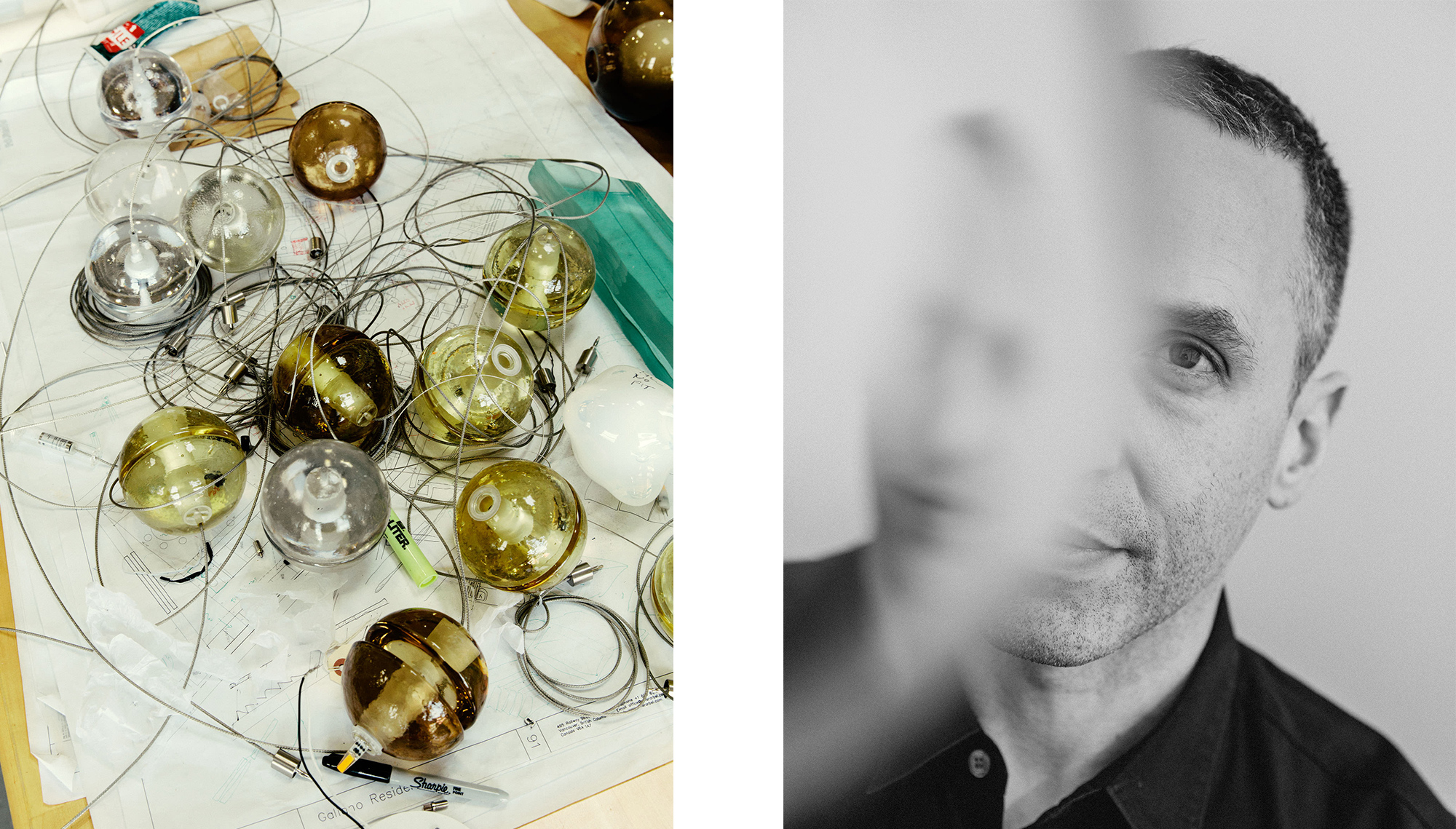 “There is greater and greater sophistication in producing exactly what we’ve imagined through various kinds of 3-D printing, parametric modelling,” Arbel says. “And very soon, basically anything that could be imagined can be made. And I ask myself, in that world: what should be made? What can we make that has meaning? That’s meaningful?” This question has propelled Arbel’s aesthetic drive to let the materials speak for themselves, to let the molecules spell out the logic of their constitution. In his practice, the immense tension between visions of the past and the endless march of progress for progress’ sake can be felt.

Increasing the intensity of experiments, Arbel’s attentions have turned to a material that we don’t often think of as having the same plasticity as molten metal or the glass seen in Project 113. That material is concrete, and he has been using it in ways deeply inspired by the Canadian theorist Mark West, who he cites as someone who pushed the boundaries of what is possible with the material that made the modern world.

Omer Arbel’s fascination with the relic and with the uncanny digs deep into people’s primordial association with the substances and tools that shape lived environments.Things don’t have to be beautiful to be impressive or durable or spectacular.

Frank Lloyd Wright once famously wrote that concrete’s beauty is in its plasticity and that, should it be freed from the reactive and traditional casting practices, it could claim its spot as the true material soul of modernity. In some ways, Arbel is taking up the challenge in a home built in Surrey, B.C., as well as Bocci’s new headquarters, currently under construction in East Vancouver.

Because wood forms can be wasteful when pouring concrete, Arbel has been experimenting with different ways to contain concrete. In these most recent projects, he has been using fabric and straw bales as units, pouring in the concrete so that it can shift and move and express itself. The result is a fountain-like form that resembles, to some extent, the flexed arm of the Michelin man. The future site of the headquarters is covered in experiments as the skeleton of the building starts to take form, pure art-as-habitation rising out of an industrial neighbourhood.

When I ask Arbel if this experimental approach gets in the way of commercial relationships, he laughs but reiterates what he mentioned before. While the material might bend and shift under pressure, Arbel does not when it comes to method. He jokes that usually he experiments on himself before he brings it to others. But switching to his soft, serious register, he explains that ideally, all architecture would be purely methodical, where the designers come with a method and build in the rhythm of the material. “Just develop a method,” he says, “and let the method make [it].” 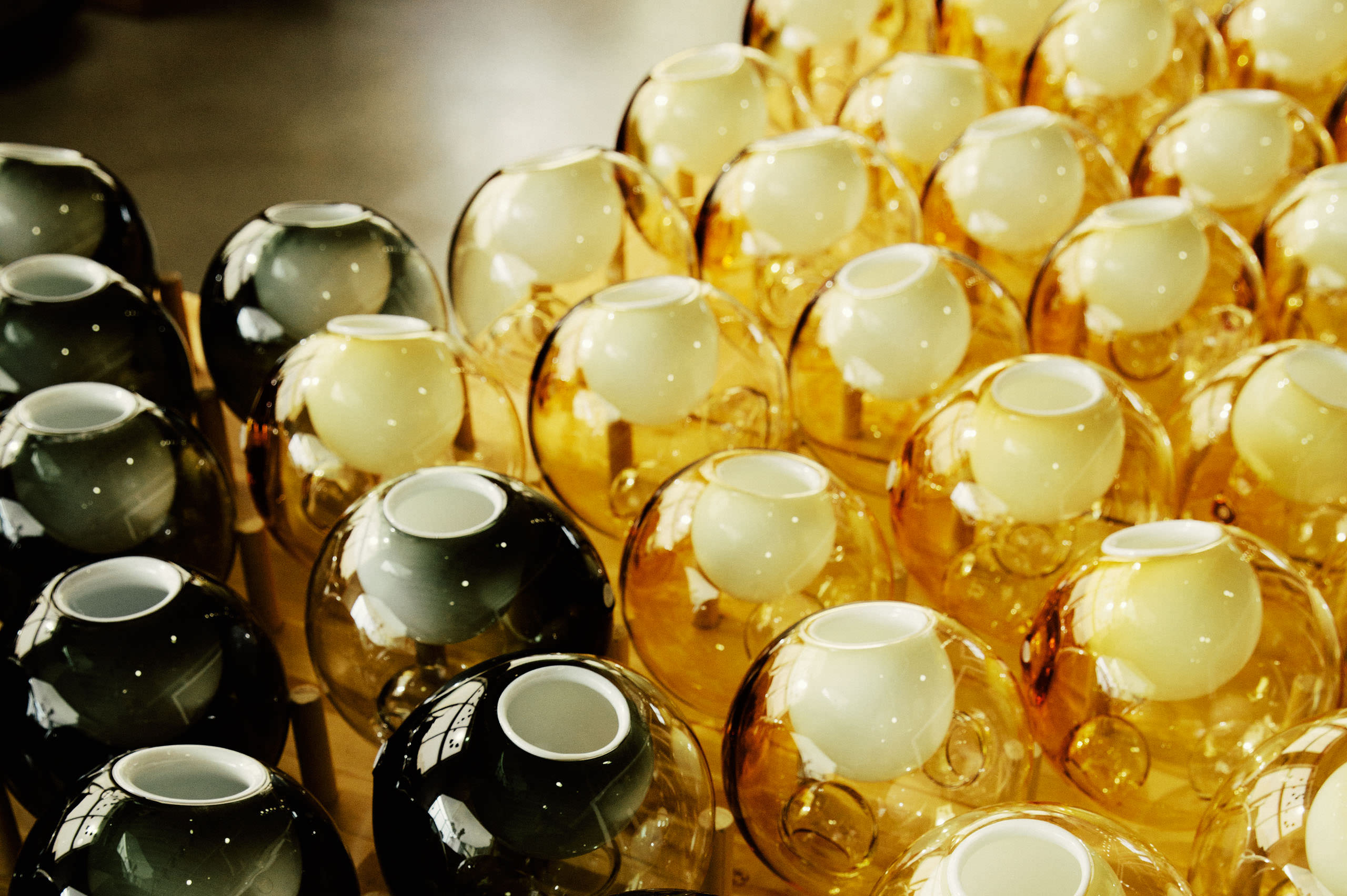 These current concerns and explanations of his method put Arbel’s past and more commercial work into context. Bocci’s increasingly complex chandeliers have become so ubiquitous, illuminating the lobbies of restaurants, skyscrapers, and such places as Canada House in London with impressive installations, that one forgets how strange they really are. In fact, they seem to be molecular themselves, floating in space in intricate but chaotic ways.

This chaos is replicated in the very design process of the lights whereby Arbel relies on what he calls “happy accidents” in the workshop.

“We set out in an intentionally vague way to explore a material or a process or an intuition,” he says, and everyone waits for the moment of success where the shapes align and the work presents itself, gives itself over to their efforts.

“Everyone can feel it. You see it. It’s something strange, something weird. Often they’re ugly, and they feel kind of ugly. The whole practice is set up to encourage these moments of surprise. Time and again I’ve discovered that they’re stronger and better than anything I could imagine myself,” he says, illustrating again, humbly, a respect for the tendencies of the material to speak for itself. A practice that is itself a bit uncanny. Knock on wood.

For more on Omer Arbel’s work, check out Phaidon’s monograph.