They’re a very entertaining couple. No, not Gilbert and George, the eminent British artists, but Dawn French and Julian Clary, leads in the recent London West End pantomime Snow White. Gilbert Prousch and George Passmore are singing their praises, as much in celebration of the panto, a curiously British form of entertainment, as the performances in question. They’re keeping the program on their table of random knick-knacks—a kind of shrine of inspiration that includes thrift store ornaments, a biography of singer Cliff Richard, and a selection of annuals for various long-defunct British children’s magazines.

It’s the kind of pop culture ephemera Gilbert and George pick up on walks around Spitalfields, the East London neighbourhood where they’ve lived together since the late 1960s. It’s on these walks that they take the photos that—after much manipulation, and typically alongside self-portraits—form the basis of the large-scale, multipanelled artworks for which they’re best known. These walks are the full extent of their wanderings, and not because the duo are in their mid-70s now. They’re real homebodies.

Prousch and Passmore say they never go to the cinema. While they always eat out—their sprawling Georgian home-cum-studio, which they bought when few people were interested in living in their now chi-chi neighbourhood, has a kitchen, but they keep nothing in it—it’s always local and alone. There was a time when they hobnobbed with other art world movers and shakers, but they’ve made a conscious decision to stop all that.

“So much of the art world exists in a bubble, never confronting actual life,” says Prousch. “But we never really liked all those dinner parties. It’s all gossip. Even now, we feel uneasy if we have to attend one. All that having to talk nicely, being polite,” he says with a still-distinct Austro-Italian accent. “We’ve always kept to ourselves, and I think our art is more modern for that. We see life in a different way because we don’t have friends, because we don’t go out, because we’re alone—alone together. We don’t spend our time discussing life, but feeling it.”

Passmore, the more chirpy and definitely more English half of the duo, speaks in a mesmeric Received Pronunciation (RP). “The world just seems to be one big, horrible battle now. Who wants to be part of that?” he says. “But then, we’ve always wanted to keep separate from that big battle—the artists fighting, the galleries fighting, the party political conflict.”

“We’ve always kept to ourselves, and I think our art is more modern for that. We see life in a different way because we don’t have friends, because we don’t go out, because we’re alone—alone together. We don’t spend our time discussing life, but feeling it.”

Gilbert and George’s routine is fixed, hermit-like, and has been for much of the 50 years since they began working together after meeting on the advanced sculpture course at Saint Martin’s School of Art (today known as Central Saint Martins College of Art and Design). They rise at the same time every day, eat the same marmalade and toast at the same café, returning to their studio to work—in silence, almost telepathically—stopping at the same time to walk to the same restaurant, “Though we take a taxi now the legs are giving up,” notes Prousch.

Famously, they even dress almost identically, in tweed three-button suits. “We arrived at the airport recently,” recounts Passmore, who likes to tell a fun anecdote, “and this official lady came up to us and said, ‘Oh gentlemen, it’s so nice to see someone properly dressed. I’ve been working in airports for so many years, and nobody dresses properly anymore. You look marvellous. It’s absolutely made my day. May I check you for explosives?”

Theirs might read like a monastic existence. Rather, they say, the less they have to think about the mundanities of everyday life, the more they’re left “totally empty headed,” says Passmore, and the freer they are to think about their art around the clock. “And we’re incredibly privileged in being able to do that. It’s incredible freedom,” he adds.

This perhaps explains why their works have never made any attempt at conforming, their art cutting its own, sometimes provocative path in opposition to trends that favour the abstract, or the minimalist, or painting (“all that old-fashioned stuff,” says Prousch). They have never really been a hit with the critics either, perhaps because their politics—they describe themselves as “ordinary conservatives” and pro-Brexit, unashamed by what they regard as the triumph of Western civilization—are generally at odds with the leftness of the British art world; but, more probably, because of the unabashed plain-speaking of their art. 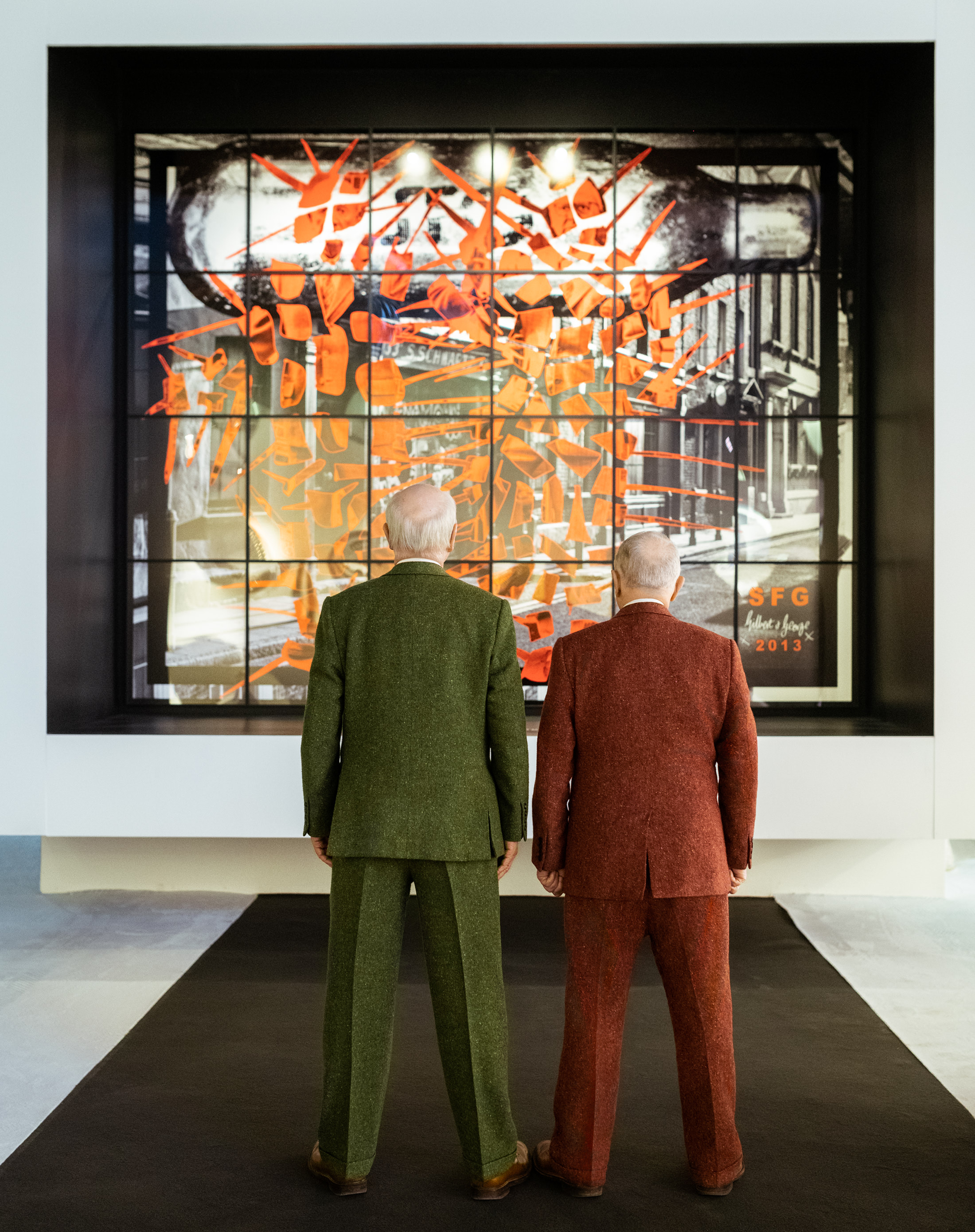 Alone together. Gilbert & George live in a synchronous solitude. Photographed at the Albert Baronian gallery in Brussels, Belgium.

Their art has, at times, included depictions of sexual acts and various bodily fluids, with titles like Naked Shit Pictures and The Fuckosophy. They haven’t been shy about addressing grand, topical, and delicate issues such as patriotism, religion, and racism, often well before the same debates become mainstream. Passmore calls their subject matter “the life force”.

They claim that the big-time gallery world has never really given them their due, which is one reason why later this year they’re marking their half-century producing art with the opening of their own foundation, around the corner from home. They’ve acquired a £5-million ($8.7-million Canadian) building and are in the process of planning the interior. “We make all of our art without any team of helpers, which is ridiculous,” notes Prousch. “We plan all the shows. We design the brochures. We install the work.”

Not that they’re short of shows. Early last year, they had an exhibition at London’s esteemed White Cube gallery, then a vast retrospective at Luma Arles and another at Helsinki Art Museum (HAM), before serving as guest artists for 2019 at the influential BRAFA art and antiques fair in Brussels. Their provocativeness hasn’t stopped them from selling their work either, although “The number of our collectors is limited, which of course is to be expected when we do what we do,” chuckles Passmore. “Collectors [tend to] like [our] art, but they don’t want it on their walls. But if they gave their chequebooks to their children, well, they’d buy us.” They sell some 20 per cent of the pieces they make—and they make every day—at prices often in excess of £500,000, “Prices sufficient that we can continue doing what we do,” says Passmore, “which is what’s important.” So yes, they’re free to do what they want.

It is, perhaps, precisely because they do take head-on the realities of contemporary urban life that Gilbert and George have typically been a hit with the proverbial man on the street. Ask a cabbie to name a living artist, as the duo have—they note it wasn’t that long ago when said cabbie wouldn’t have been able to, such has been the relatively recent turnaround of the place of contemporary art in mainstream culture—and it’s a good bet that Gilbert & George will be high on the list.

“The idea that our art is provocative is just a media invention,” says Passmore. “No member of the public has ever come up to us and said, ‘Excuse me, aren’t you the provocative artists?’ The public wants to be challenged. But art has in some way become separated from the real world. There’s always been this huge gulf between critics and the public—there still is, not just in art, but in music, in the movies, in the theatre. The art world is generally hostile to anyone doing anything different. It’s still the big museums and institutions that decide what the trends are, and it’s trendiness that sees so many artists overlooked.”

Notes Prousch, “We’re not moaning about it. We accept it.”

“We want our art to be visually powerful, but also a part of the world. Most people who stop us in the street have never been to an art gallery. But the art speaks to them because it’s about life.”

“Content, and meaning, and sentiment in art still seem to be taboo. We were brought up in art schools to believe that,” adds Passmore. “You can’t look at a Degas and just see a painting of a ballet dancer these days. No, no, no, it’s the shapes in their legs, and the background versus the foreground—such nonsense! It’s just eliminating content. We want our art to be visually powerful, but also a part of the world, which is why I think the public tends to like our work. We’re optimistic about the Western world, whereas a lot of artists just moan about it all the time. Most people who stop us in the street have never been to an art gallery. But the art speaks to them because it’s about life.”

Such is the earnestness, the kitschiness, the eccentricity of the pair (eccentric even by willfully eccentric British standards) that it’s tempting to think everything about Gilbert and George is an act. After all, their breakthrough came when they gate crashed an exhibition they weren’t part of and, their faces covered in multicoloured metallic hues, stood in the middle of the gallery as “living sculptures”. And they see their lives and the traces they leave—the house and its endless collections of, by turns, quaint and museum-standard ceramics, period furniture, and other paraphernalia, not to mention the volumes documenting the evolution of their art—as all being part of their output. “Our legacy is our life—what we did,” notes Prousch.

And yet in person, it all feels genuine, guileless, fully lived: a gay couple who met the year homosexuality was decriminalized in the U.K., who found security and power in working together, and have made a life together on their own terms. It’s not a bad gig.

The Best Canadian Art Exhibitions of 2019