On a hot Caribbean night in July 2018, musicians, artists, actors, supermodels, and royalty—all dressed in white with a splash of gold—wandered down to Britannia Bay on Mustique for a birthday celebration to remember. The gathering of 500 sipped cocktails and feasted under a large tent, kicking off their shoes to wade in the waves with no paparazzi in sight. This display of joie de vivre was not in honour of a person, but of a place: Mustique was turning 50.

Part of St. Vincent and the Grenadines, and widely known as the world’s most glamorous island, Mustique has earned its party stripes. Blue-blooded vacationers began visiting the 1,400-acre isle after Scottish aristocrat Colin Tennant purchased it in 1958 from the Hazell family—descendants of an English dynasty—and began developing it. In 1968, Mustique was transformed into a private company, with its homeowners acting as shareholders. Most famous among them was the late Princess Margaret (sister of Queen Elizabeth II), whose legendary villa, Les Jolies Eaux, was situated on a 10-acre property on the island’s southern tip that had been gifted to her by Tennant. The mansion would become a mecca for her hedonistic soirées well into the 1980s. Today, most of those early homeowner families have moved on—the Guinness clan is the longest-running resident family on Mustique—but memories of the past permeate modern-day island life. 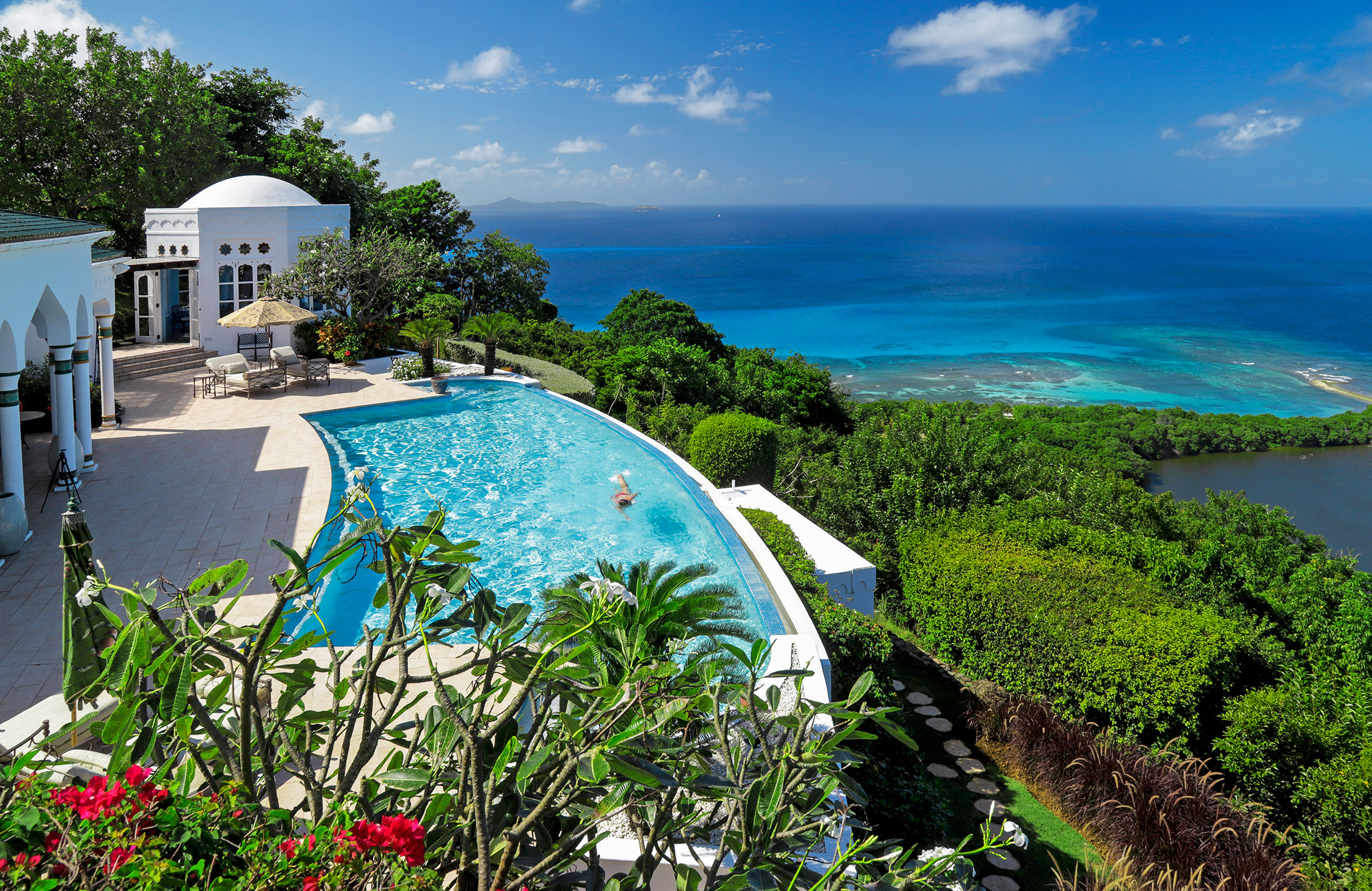 Visitors are welcome to dip their toes into the glamorous world by staying at one of two hotels on the island, the Cotton House or Firefly, or booking into one of the 84 villas up for rent. These include a mansion previously owned by David Bowie (a Balinese-style seven-bedroom villa called Mandalay); the Palladian-style Palm Beach, currently owned by Tommy Hilfiger; or, my final destination, the Moroccan-inspired Toucan Hill, built upon the island’s highest point.

On the short charter flight from St. Lucia to Mustique, I spy Basil Charles. Now in his 70s, the legendary bartender is a close friend of Mick Jagger’s and counts actors and musicians among his inner circle. Basil’s Bar was purchased by the Mustique Company and reopened last year after a two-year renovation by Philippe Starck. Thankfully, it resembles the original with overwater thatch-covered huts, ornate Indonesian wood detailing resuscitated from the old bar, and trademark Hurricane cocktails on the menu. Charles is a frequent guest when not jetting between Mustique, St. Vincent, New York, and London. 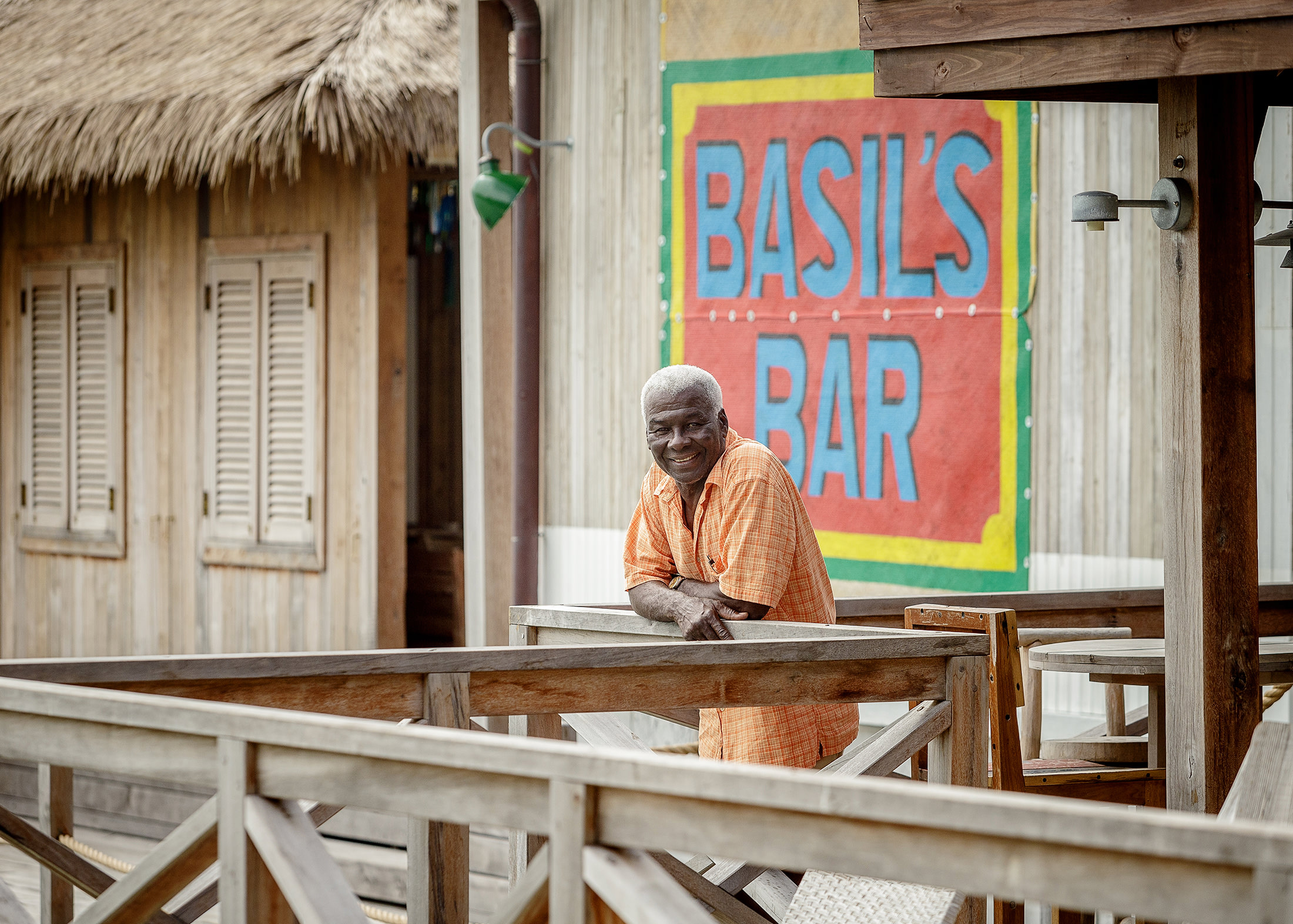 I land at Mustique’s airport, with its humble wooden building, and learn that getting around on the island is done via “mule”, as the golf carts are called. On my way to Toucan Hill, the Great House rushes by—previously owned by Colin Tennant, and later Christina Onassis’s third husband, it is now the domain of Canadian businessman Lawrence Stroll. There are peekaboo views of white sand beaches, a bamboo church, and a primary school (number of pupils: 33). As the road twists and turns uphill, a palatial mansion comes into view. To enter, a chic staircase leads through a mosaiced entrance and carved wooden doors. Beyond, there is a sweeping vista of the Caribbean Sea and an infinity pool framed by elegant arches. My breath catches in my throat. “I always wanted the entrance to give that wow effect,” says Tatiana Copeland, proprietor of Toucan Hill, as she greets me.

The Moroccan-inspired villa of Toucan Hill is built upon the island’s highest point. “I always wanted the entrance to give that wow effect,” says owner Tatiana Copeland.

The extravagant villa rests like a cherry on top of paradise. It is owned by Mrs. Copeland (as she prefers to be called), a gregarious Delaware-based businesswoman—whose great-uncle was composer Sergei Rachmaninoff—and her husband, Gerret Copeland, of the DuPont family lineage. The duo also own Bouchaine Vineyards, in Napa Valley, and are ardent philanthropists.

The Copelands were guests on Mustique before they were owners, staying at over 20 different villas throughout the years, and were introduced to the island by none other than Princess Margaret. “When we first visited in the 1980s, there were only about 30 houses on the island,” Mrs. Copeland recalls over dinner in the elaborate dining pavilion, its floor covered in rare blue tiles from Brazil, which pick up the cerulean sea beyond. “Princess Margaret and Colin [Tennant] were so great at entertaining. Margaret lived a life of fantasy down here. She’d come for the months of February and November, and always had fascinating houseguests and unusual costume parties. The island felt like a private club back then.”

Fluent in Russian, French, Spanish, German, and English, Mrs. Copeland brings a singular charisma to every room she enters. The fanciful aesthetic of Toucan Hill is the result of her commanding eye—the lady of the house is present in all of its design details. “I sign my e-mails Lady Touc,” she says with a mischievous smile.

The eclectic objects d’art in the villa were handpicked from places like Tunisia, Turkey, Morocco, and Italy, and there are over 30 sets of tableware on hand, from the playful to the ornate. “I had all of the furniture bought before the house was built,” Mrs. Copeland explains, as she gives me a tour of her home. “I knew exactly what I wanted.” As the name Toucan Hill implies, toucans are a regular motif, from colourful large-scale paintings to a delicate set of Hermès china she picked up in Paris.

Anchored by a central courtyard, Toucan Hill sleeps eight guests and is over 10,000 square feet in size. It was designed by Philadelphia-based architecture firm Martin Jay Rosenblum AIA and Associates, and took a full decade to plan and build. Guests have included Kelly Ripa, who threw a birthday party for her husband here, and John Cleese, who was married on the property. (An effusive tribute from the British legend is scrawled in the guest book.) 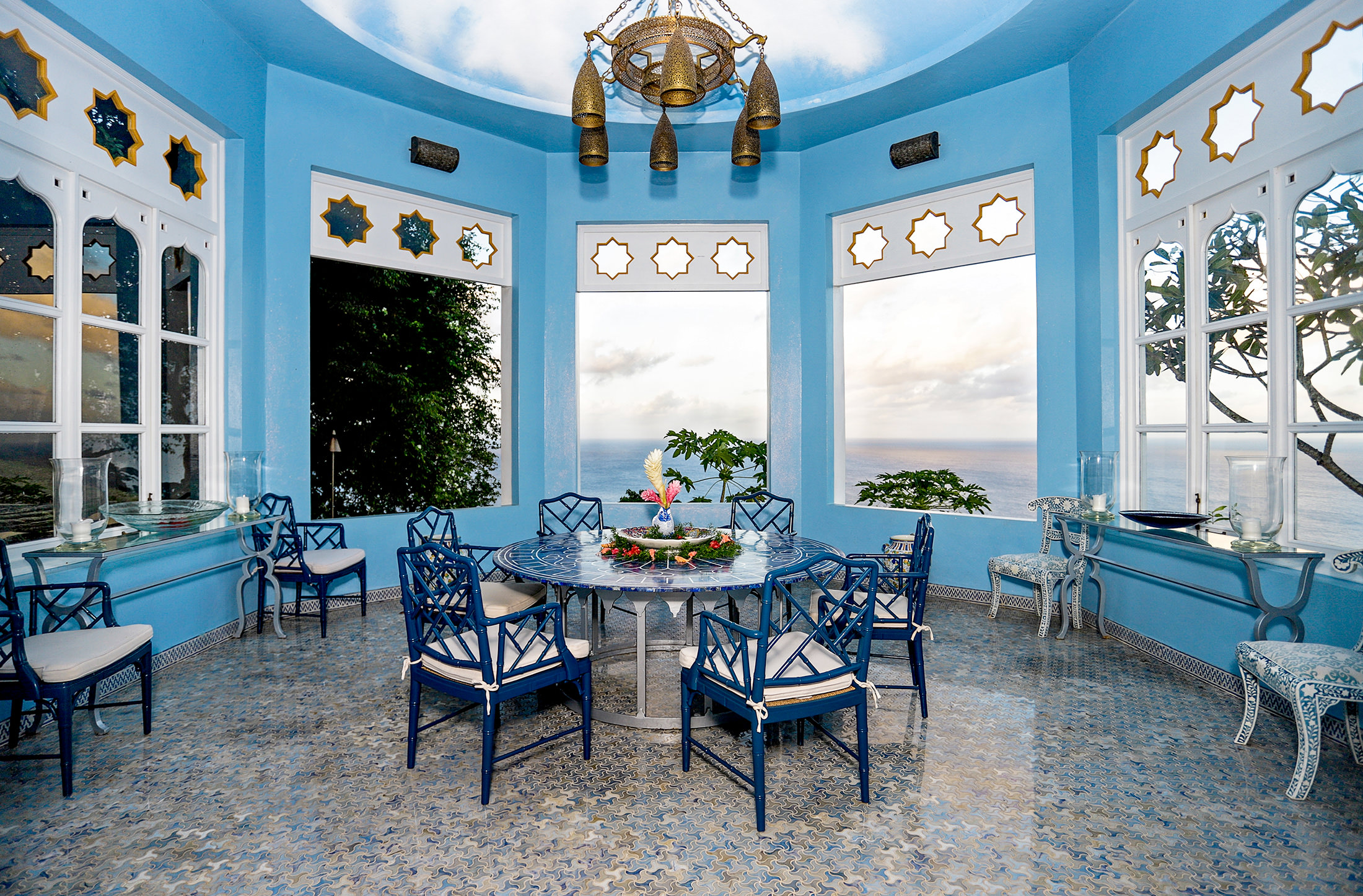 “I want people to relax here,” says Mrs. Copeland, “but I also want them to have fun.” As such, any guest’s whim can be catered to. Patricia Medford, Toucan Hill’s villa manager, makes sure of that. She has roots in St. Vincent, then lived in New York for many years before permanently moving to Mustique. Medford’s encyclopedic knowledge of the island ensures there is a personal touch to each visitor’s stay. “Toucan Hill is not a hotel,” she says. “When you book, it’s your home. It’s all about you. It’s about disconnecting from the real world—listening to the birds, the wind in the palms. The island brings out the wellness in everyone.” To that end, there are no TVs in the bedrooms, and Wi-Fi was only installed a few years ago.

Daytime activities can include horseback riding, scuba diving, fishing, or hiking on one of the island’s many picturesque routes. Avid golfers may hop on a 10-minute flight to neighbouring Canouan to play their course. When evening falls, the entertainment of choice is socializing; it’s simply tradition. Basil’s Bar has live music, and a weekly Tuesday night mixer at the Cotton House welcomes visitors and homeowners alike. Everyone will have an interesting story, from convivial couples on bucket list vacations to laid-back regulars who have been coming for decades. You might well run into Rupert Spurgeon, commercial director for the Mustique Company. He previously worked for Goodwood House in West Sussex before making the move to the Caribbean.

Over the past 20 years, Mustique’s party island reputation has matured into more of a family affair. But, as evening falls, the entertainment of choice is still socializing.

“People will visit Mustique for the first time and meet people at this cocktail night, then have them over for dinner or drinks at their villa,” he explains. “They may never have met before, but they form these lasting friendships and come back year after year, renewing those connections.” Over the past 20 years, Mustique’s party island reputation has matured into more of a family affair, with homeowners’ second and third generations coming back with their children. “The prime reason why people come here is the sense of community,” adds Spurgeon. “That, and security.”

Privacy is one of Mustique’s pillars, enforced by a no-fly zone above the island and a succession of former British police chiefs on land. Simply put, if you’re at the Cotton House cocktail night, you have been vetted by security well before that. For yachties, there is limited mooring available in Brittania Bay, which requires advance booking and a set of rules to comply to. (Firmly stated among them: “Do not photograph private homes or guests.”) 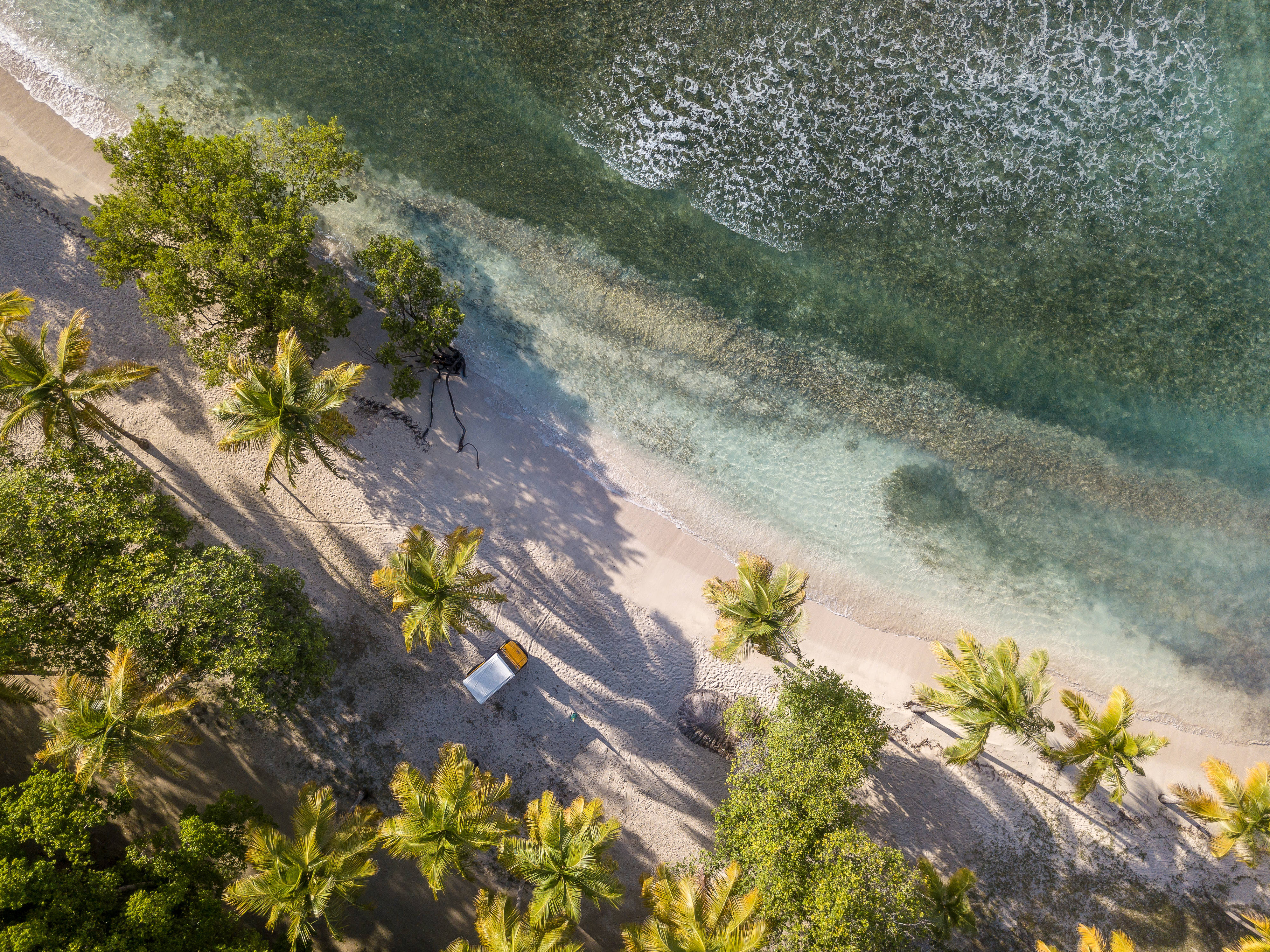 Privacy is a pillar of the island. Photo courtesy of Mustique.

The Mustique Company handles all villa rentals, along with the island’s infrastructure. It acts as both the governing body of the island and the employee of its homeowners, making for a symbiotic relationship that allows the little oasis to run smoothly. There are far more amenities now than in the ’80s, but the small-town feeling of remoteness remains, from the used book exchange box at the airport to the familiarity among islanders—everyone knows everyone. And they all know Mr. and Mrs. Copeland; riding along in a mule with the two entails many waves to passersby.

Back at her hilltop abode, Mrs. Copeland recalls a party she attended during the rollicking ’80s involving Princess Margaret seated on a wooden throne strewn with fresh orchid petals, a fashion show held to the beats of a local band, and a shocking wardrobe malfunction. These days, things may be tamer, but there’s still magic to be experienced. As Mrs. Copeland puts it, “My love of Mustique is based on the old Mustique, the new Mustique, and the house I created. But it is a mixture of both past and present. I needed to love both equally to be able to come back.” The Argo-Saronic Islands of Greece