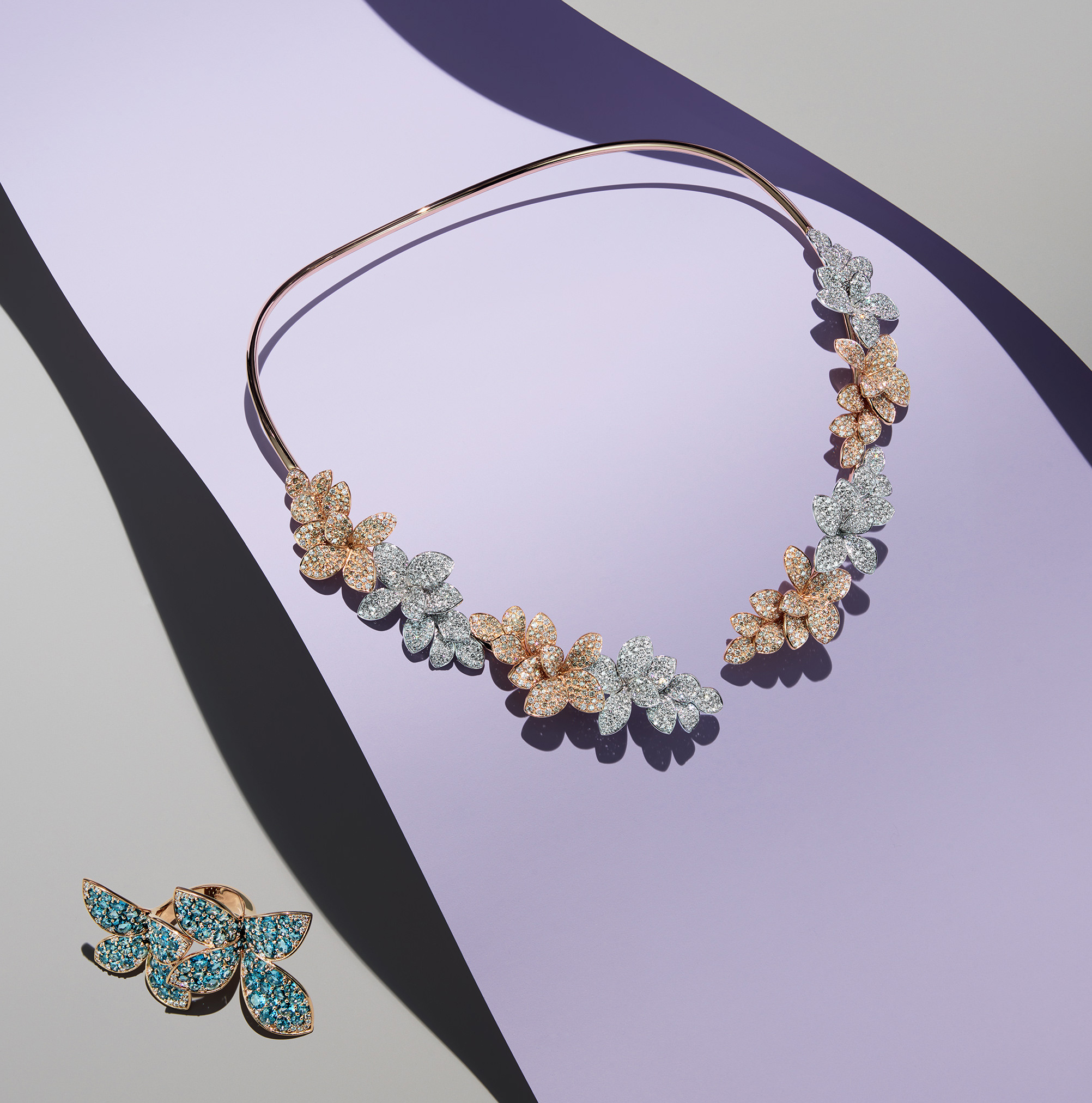 Italians are famous for their fervent embrace of la dolce vita, with all the romance it entails. When you ask Eugenia Bruni, creative director of jewellery brand Pasquale Bruni (and daughter of the founder), to describe the essence of the family-owned and -run business, her language turns poetic as she speaks about intimacy, creativity, enchantment, and the divine.

“It is the look of a goddess, of an Amazon, of a contemporary queen, of a woman who loves herself,” says Bruni. “I love creating for a woman who can reinvent herself every day, and I want to give her, through jewellery, the strength and the power to do so. Her being and her uniqueness must not be forgotten for a single second.”

Bruni grew up in the business at her father’s side, gaining an appreciation for the quality and character of his work. Pasquale, her father, was reared in the jewellery workshops of Valenza, Italy’s jewellery-making capital. He soon unlocked the secrets of the goldsmith’s trade, and mastered its techniques and painstaking attention to detail. In 1976, at the age of 20, Pasquale founded Gioielmoda, a small artisan firm that led to the establishment of his namesake brand in 1997. In 2001, Eugenia assumed the role of creative director, bringing a feminine sensibility and contemporary flair to Pasquale Bruni’s evolving collections.

“I love creating for a woman who can reinvent herself every day, and I want to give her, through jewellery, the strength and the power to do so. Her being and her uniqueness must not be forgotten for a single second,” says Eugenia Bruni.

In addition to women, her muses are nature, colours, and shapes. “Petals are shields, the leaves pure sensuality, the flowers are woman in her continuous evolution and transformation into a garden of emotions,” she says. “The design of a piece of jewellery is capable of reaching the heart in a metamorphosis of emotions, revealing its intimacy and its essence by wearing it.”

The new Segreti di Luna (Secrets of the Moon) collection turns to the heavens and the lunar orb as well as the intrinsically linked earthly sea for inspiration, but Bruni adds a lyrical dimension as well, drawing upon ancient lore. She references Selene, the Greek goddess of the moon, and Yemanjà, the sea deity in the Yoruba religion, as representations of womankind’s emotion and power. 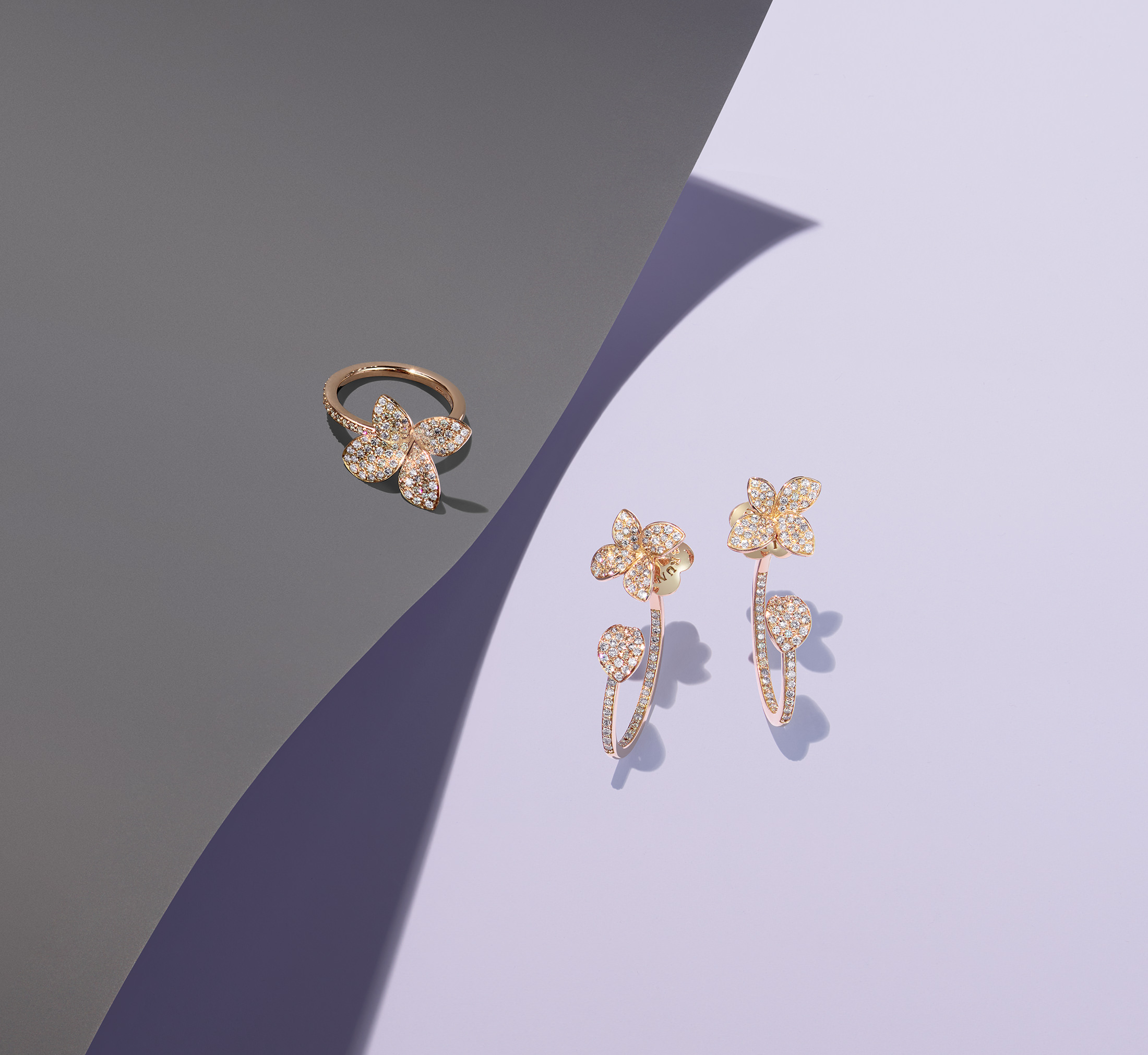 The Petit Gardin rose gold ring and earrings with white and champagne diamonds.

As the legend goes, Selene fell in love at first sight with a handsome mortal shepherd, Endymion, whom she spotted sleeping among his flock as she rode across the sky on her horse. She became so smitten with him that she asked Zeus to put him into an eternal sleep so that she could love him as he was forever. He was laid in a cave on Mount Latmus, where she visited him nightly over the ages and bore 50 of his children. “Selene, the lunar goddess, is a metaphor of fascination and mystery in the midst of gems of the full moon,” says Bruni. “Her secrets are guarded in a depth of emotions in the sea of Yemanjà, who keeps them safely and protects them in an infinite blue.”

Bruni interprets the legend in noble metals, which are shaped into organic, leaf-like forms and set with glittering gems: London blue topaz, white moonstones, and diamonds.

The Stelle in Fiore collection takes inspiration from the imaginative interplay of stars and comets in the night sky and radiant garden blossoms on a spring morning. One white and rose gold necklace wraps around the neck in a garland of blossoms, with white and champagne diamonds projecting the rosy hue of dawn. This statement piece is complemented by Secret Garden rings evoking jewelled flowers, which can be stacked for heightened drama or worn alone.

“This is something that will always exist in our DNA like imagination—unpredictable imagination. Creativity has no limits of colours, shapes, and cultures,” says Bruni.

Bruni may seem to have her head in the clouds, but her heart is committed to meaningful earthly endeavours, such as the Amore Africa project. The brand’s Amore 4° Chakra collection benefits the charitable initiative, with a portion of sales going to projects such as providing medical care and clean drinking water to families in Kenya’s Majaoni village.

Italian in its heart and soul, the Pasquale Bruni brand epitomizes the values of family and craftsmanship. “Each piece has been created in Italy with passion in every single one of its phases [and] with maniacal attention in our workshop for 50 years,” says Bruni. “This is something that will always exist in our DNA like imagination—unpredictable imagination.” Moreover, she adds, “Creativity has no limits of colours, shapes, and cultures.”