Comfortably tucked into a plush leather seat, I’m cruising along with barely a thought for the outside world. I have Wi-Fi for sending e-mails, USB ports to keep my phone alive, and a tablet I can use to make various adjustments to both my seat and the cabin around me. With Frank Ocean pouring from the speakers, I’m not in business class, I’m in the middle row of BMW’s latest SUV, the large and in charge X7.

En route from Tallahassee, Florida, to Baton Rouge, Louisiana, I’m covering a great many miles as both a driver and a passenger in the brand-new X7. Functioning as an SUV expression of BMW’s long-standing flagship 7 Series, the X7 is a luxurious three-row SUV that is a larger (and sure to be popular) alternative to the brand’s original SUV, the X5.

From Chevrolet’s Suburban to Ford’s Expedition, the Mercedes-Benz GLS to the Volkswagen Atlas, large SUVs have become common in North America, but this is BMW’s first foray into anything larger than the X5. While many brands went big and have slowly come around to smaller SUVs, BMW iterated its SUV platform with smaller sporty and practical models like the X3, the X1, and more recently the X2. 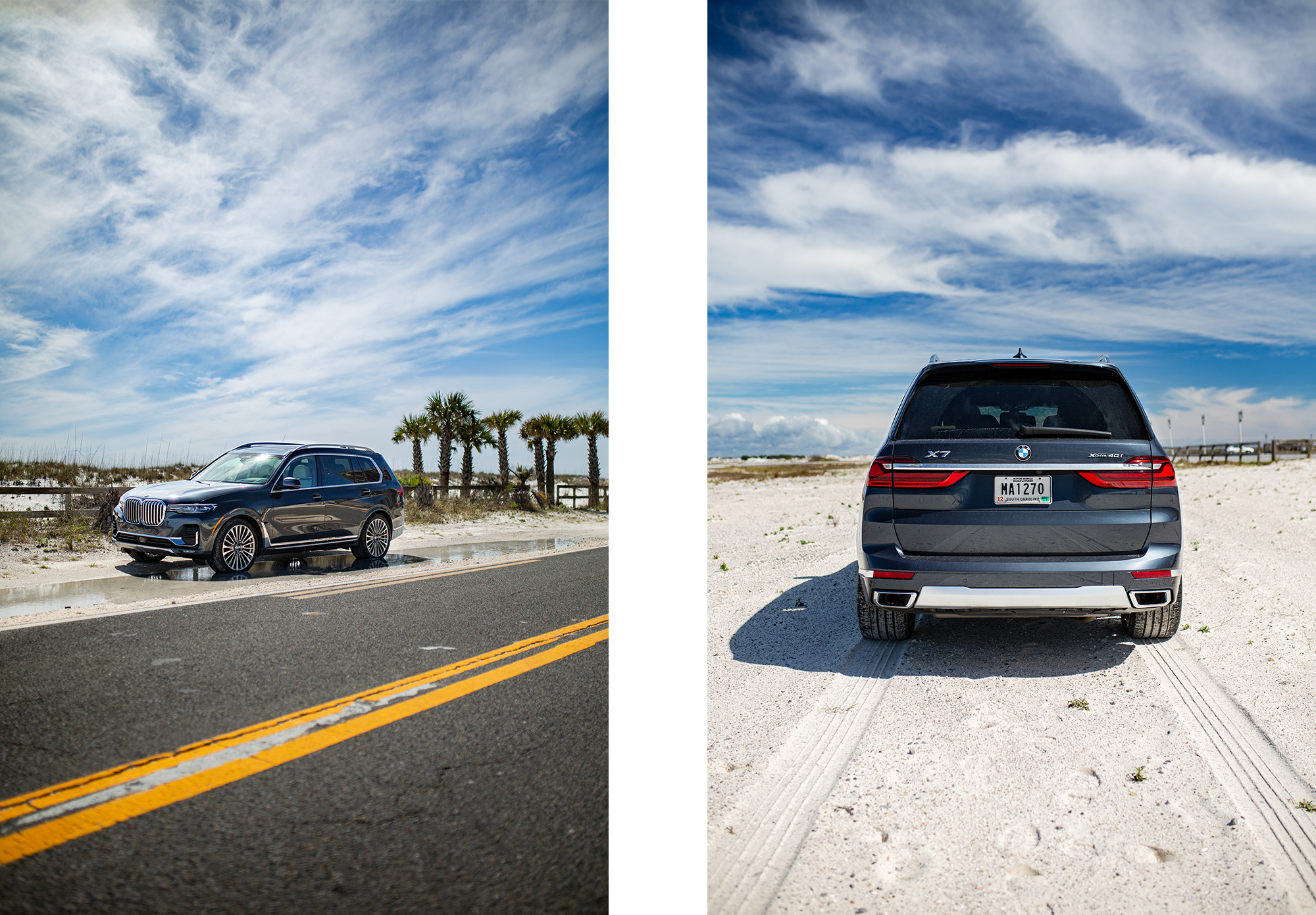 Launched in two trim levels with a host of luxury and tech options, the X7 comes as either the xDrive40i (with a 3-litre turbocharged inline six-cylinder making 335 horsepower) or the xDrive50i, which has a 4.4-litre turbocharged V8 that makes a punchy 456 horsepower. Both models have BMW’s xDrive all wheel drive system and feature three rows of seating, a three-panel panoramic sunroof, and automatic four-zone climate control. Both the middle and back rows can be folded down automatically using controls on either of the rear doors or in the rear cargo area, which is accessed via a two-section split tailgate.

From the driver’s seat, it’s not unlike a modern 7 Series or even a very well-appointed X5. Tech abounds, with a fully digital instrument cluster, a heads-up display, all of the usual creature comforts, and a 12.3-inch infotainment display in the centre of the dashboard. While the standard sound system is a Harman Kardon, there is an upgrade option for a 1500-watt, 20 speaker Bowers & Wilkins.

Sporting the BMW Individual interior package with two-tone Merino leather, the X7 doesn’t skimp on comfort even when you’re a passenger. With available rear infotainment screens, occupants in either of the middle seats can take in their own media or share their favourite road trip playlist with the whole crew. I’m 6-foot-3, and as we traversed a long section of the Gulf Coast, even with a laptop on my lap I was very comfortable in the middle row, with its own climate zone, cup holders, USB ports, and optional heated seats. As you’d imagine, the third row is quite a bit tighter and not designed for someone my size. That said, it’s also far from being an afterthought. 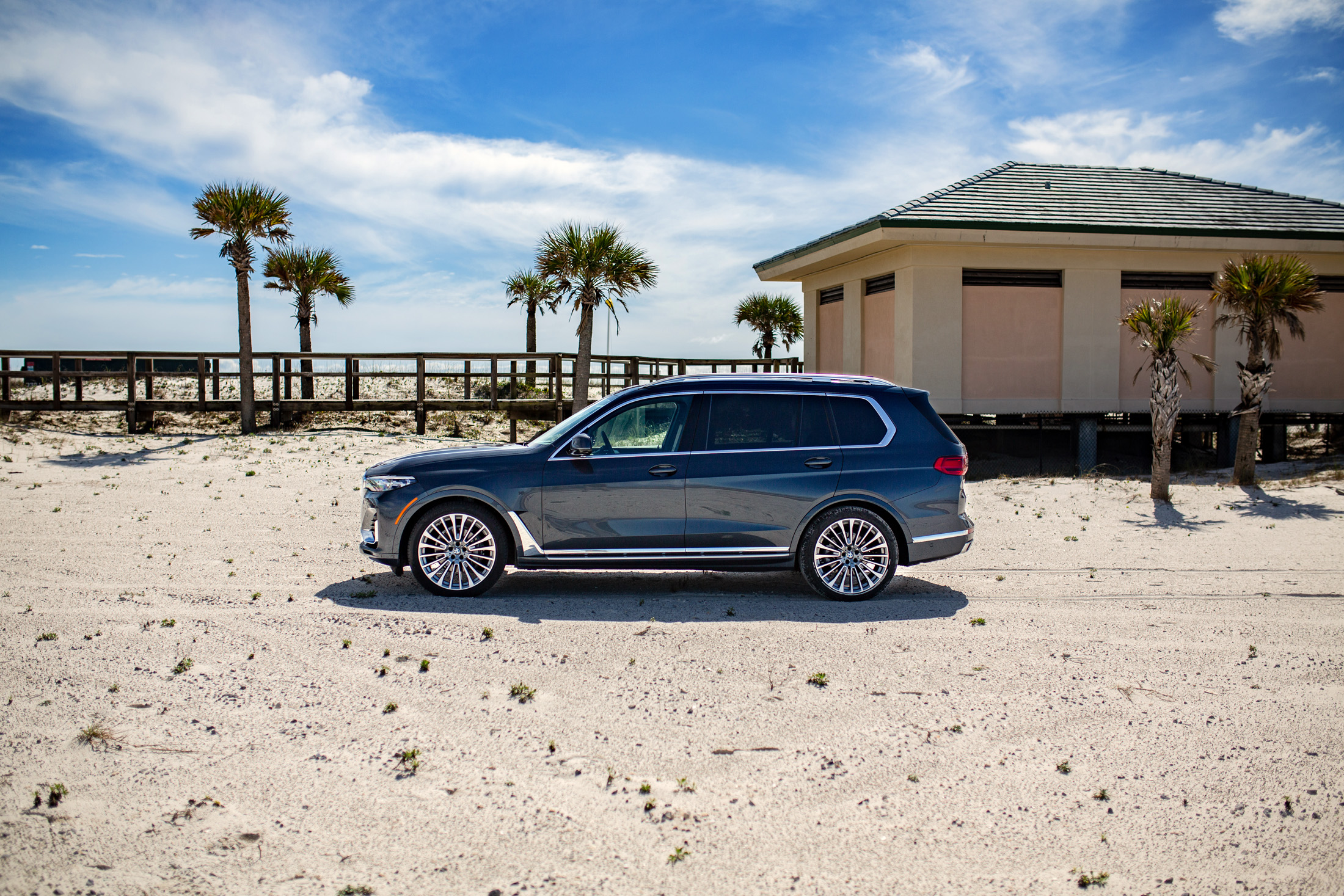 The X7 is BMW’s largest SUV yet.

If you find yourself in the driver’s seat, perhaps after your colleague has driven from Pensacola Beach across a narrow section of Alabama and into southern Mississippi, the X7 will not disappoint. With the charm of any big BMW, it feels more luxurious and insulating than I expected. Pull the faceted crystal gear selector and, even with the V8, the X7 rolls quietly away from a stop. Should you need to pass some slow-moving farm equipment outside Biloxi, press the sport button and give that V8 a listen as the xDrive50i drops a few gears and makes short but boisterous work of any agricultural hardware in your path.

If you plan to wake up in Tallahassee and end your day with a late-night meal in Baton Rouge, the X7 is a supremely capable mode of conveyance from which to survey a considerable cross-section of the American South. To its credit, the X7 is big, roomy, quiet, quick, and full of tech to manage the needs of both your many passengers and the road ahead.

The X7 is a successful port of the quiet, athletic confidence of the 7 Series crossed with the high-riding versatility common to BMW’s X Series SUVs.

From cities to sandy beach towns, across river deltas, bayous, and interstates, the X7 is a successful port of the quiet, athletic confidence of the 7 Series crossed with the high-riding versatility common to BMW’s X Series SUVs (for the record, BMW prefers “SAV”, for sport activity vehicle).

In all the best ways, the X7 is almost a big X5, but in a few crucial ones, it’s something entirely different. Since the brand is arguably late to the big SUV party, it had to commit to the philosophy of whatever the X7 would become. As a result, the X7 is less an X5 with a long wheelbase and more a competitor for the premium end of the market.

The X7 series is loaded with tech.

After several hundred miles, I can safely say that the X7 is not only considerable competition for the likes of the Mercedes-Benz GLS, the Audi Q7, and the Lexus LX, but when optioned appropriately, it’s also ready to take on even more premium competition from Land Rover. Starting at $92,500 for the xDrive40i and $110,100 for the V8-equipped xDrive50i, a very well-optioned X7 will run about $125,000 and offer both direct competition to the Mercedes GLS 550 and strong value when compared to the base price Range Rover, which has a much less powerful engine and no third row. An impressively equipped family hauler that borrows the best from the 7 Series and the X5, the X7 is well placed to become a very popular option in the world of luxury three-row SUVs.