Before taking up the painter’s brush full-time, Andy Dixon, a North Vancouver native, tried his hand at music in the city’s punk scene, singing and playing guitar in various bands, including D.B.S. and the Red Light Sting.

“I think 16-year-old Andy would be bewildered by where I am now,” the 38-year-old Dixon says. “It’s a bit like I’m betraying my punk rock roots,” he explains in his Los Angeles studio, having moved to the city, from Vancouver, earlier this year. “In the ’90s, doing anything for money was the original sin.”

Today, it would be fair to say that Dixon’s art practice revolves around money and its cultural markers, including the silk Versace shirts, Ming vases, and red Lamborghinis that populate his canvases. “He borrows context from Renaissance art and past masters, reinterpreting and redefining them in the contemporary world,” says gallery manager Rebecca Smith of Beers London, the U.K. gallery that represents him, referencing the tradition seen throughout art history of showing off your wealth. In addition to the kinds of luxury goods you might buy at Harrods, bountiful tablescapes of fruit and game that evoke Flemish still lifes are also a recurring subject matter.

“I think 16-year-old Andy would be bewildered by where I am now,” the 38-year-old Dixon says. “It’s a bit like I’m betraying my punk rock roots.”

Dixon paints his canvases on the floor, unstretched, filling in their basic outlines with a distinct palette of pastels dominated by vivid teals, bright reds and yellows, and varying shades of pink. His thematic focus on luxury goods, he says, stems from an interest in the psychology of value. “Why things cost what they do, what is money, and why are we drawn to stuff. I think money is funny. The work isn’t a moral stance at all, more of an exploration of the comedy of it.” 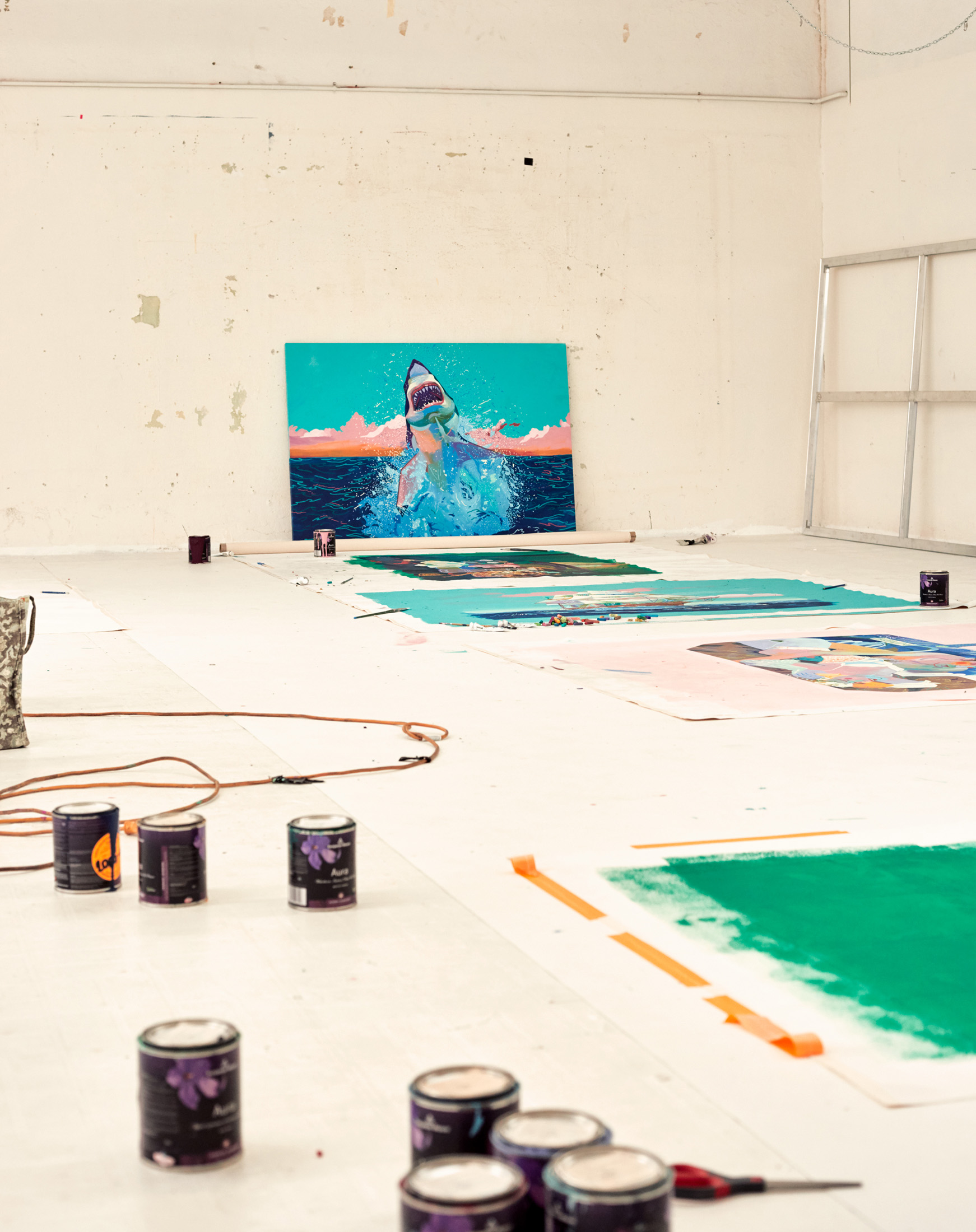 Seemingly to reconcile with the stigma of selling out, Dixon embeds an underlying self-deprecation in his body of work, especially when the subject matter is the wealth of the art world. Art itself is portrayed as a luxury item, as in a recently completed painting hanging on his studio wall—a classical depiction of Narcissus that he found on the Internet, a nod to the inherently narcissistic nature of being an artist. The composition includes a picture frame painted directly onto the canvas to indicate that this is a painting of a painting; it is slated to debut at Dixon’s first solo show in L.A., titled On the Ceiling of My Suite in the Royal Palace which opens on June 3 at Wilding Cran gallery. (Dixon regularly shows his work in Vancouver, Los Angeles, and London.) This fall, his Beers London show, Alchemy, (on view October 12–November 17) delves a little deeper on the meta spectrum with a series of pieces that can be interpreted as paintings-of-paintings of reinterpretations of historical art tropes such as ships, reclining nudes, and English equestrian scenes. It will also include a series called Patron’s Home, which representing Dixon’s own paintings within the new painting, following a tradition in which the likes of Vincent van Gogh would include images of their works inside paintings of their studios. In Dixon’s case, the settings are the living rooms of art collectors who have bought his work, emphasizing not the creative aspects of the painting, but the commercial ones instead. (One collector of Dixon’s artwork is actress Mindy Kaling, who owns three paintings and has gushed about them on Instagram.) This layering of historical references with contemporary social commentary defines the through line between Dixon’s current and former lives, despite the seeming 180-degree reversal: collage. During his musical days, he made merch-table goods—T-shirts, stickers, album covers—in the DIY punk rock tradition of cutting and pasting found images. “[In my teens] I was accidentally forging this career as a graphic designer in the music industry,” he says of his taking on commissions from other bands in the Pacific Northwest punk scene, and others in Ontario and New York. Then he moved on to sample-based electronic music, painting on the side throughout.

Dixon had no interest in attending art school. “Bringing art—something that I loved so much—into such a stale, blasphemous environment felt like a bad move to me as a kid,” he says. “When I was 30, I had this existential crisis. I realized that I was still trying to figure out how to express myself as a musician, being in a band for two months and going to the next one. And somehow in the background, this fine art thing had taken off.”

His painting hobby dovetailed nicely with his musical career, bringing his art to exhibitions in “DIY anarchist punk art spaces” before he eventually moved on to galleries. By 2012, Dixon had quit all of his bands and turned to painting full-time, yet he recognizes the parallels between the two. 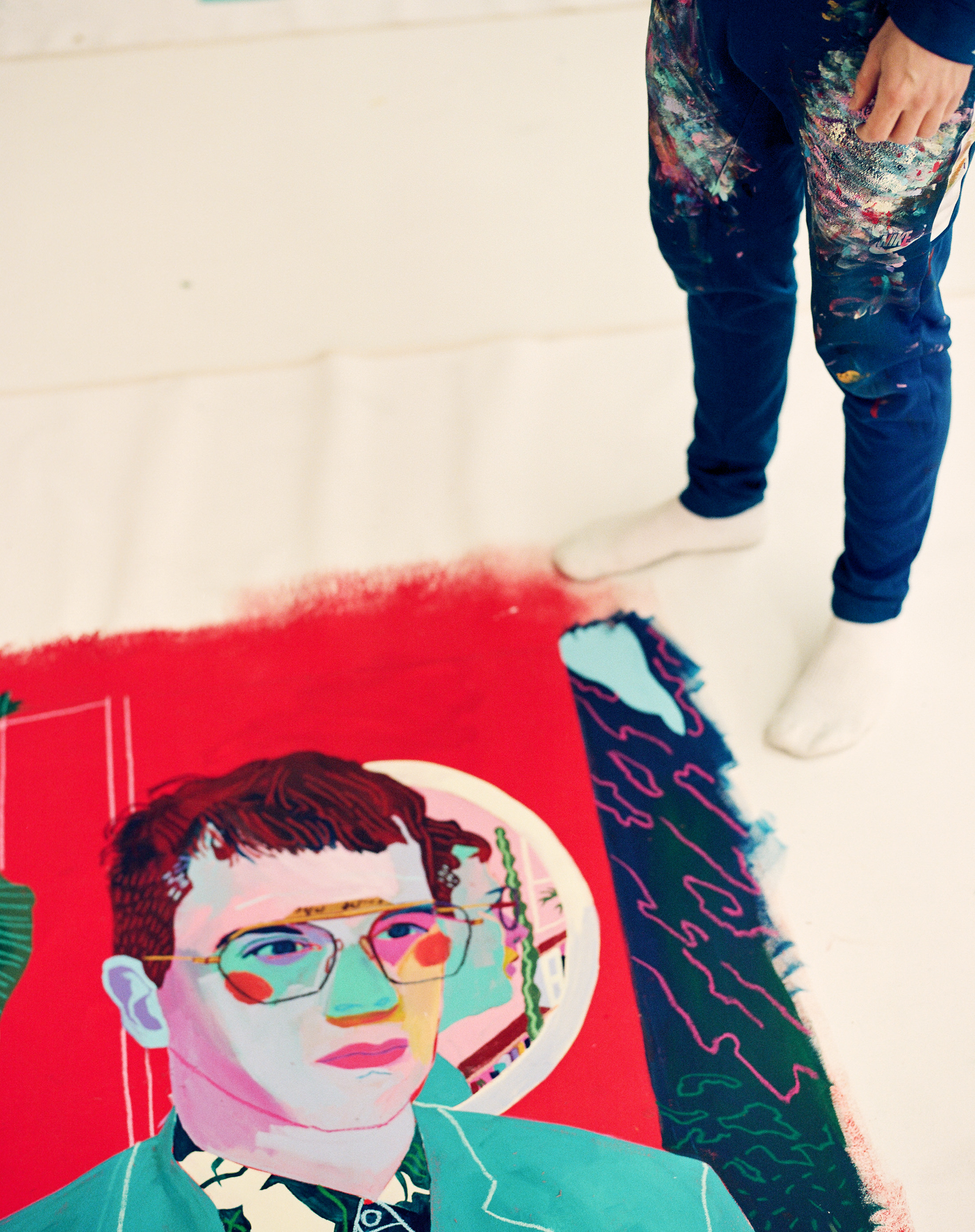 “These are tropes from art history that I’m playing with and recontextualizing the same way I would have played with a James Brown sample,” he says. “A lot of the music I was making was technically illegal because of copyright laws. I’m still interested in authorship and who owns what. There’s a punkness to taking someone else’s thing and saying you’ll turn it into something else, whether they like it or not.”

Dixon embeds an underlying self-deprecation in his body of work, especially when the subject matter is the wealth of the art world.

“I never read the article,” he says, “but I was aware of this kid’s work. It was a little bit weird, if I’m being honest, but I was in bands that sounded exactly like [punk rockers] NOFX. When you’re young and trying to find your voice, it naturally happens you borrow too strongly from someone. There was no harm, no foul, until my ex-gallery signed him.”

Dixon split with London- and New York–based gallerist Rebecca Hossack in 2016, and she added Holcomb to her roster just over a year later. (Hossack could not be reached for comment.) Meanwhile, the ultrasaturated colours in Dixon’s work often draw parallels of their own to David Hockney’s scenes of L.A. domestic bliss. In light of the frequent comparisons, Dixon says he “retroactively became a superfan,” although he can pinpoint the source of his palette elsewhere, and with remarkable clarity.

As a child he’d watch his two older brothers play Dig Dug, a subterranean-themed video game where the goal was to burrow as deep into the ground as possible. Onscreen, depth was illustrated by stripes of colour that would change as the player descended. “It was my favourite video game, not because I ever played it, but because I was excited to see what the next set of colours would be,” Dixon recalls. “I remember getting off as a kid seeing colours offset other colours, that putting them next to each other could make them nice.” It was a thrill he filed away during his early works of graphic design (his brothers, conversely, took after their accountant father and inherited his “penchant for business, numbers, and finance”), for which he adhered to the rigid punk rock palette of black and white. In the late ’90s, however, his interest in the world of obscure French electronic music revived his latent memories.

“There was a band called DAT Politics that did very cute electronic stuff done on low-fi synthesizers, and a lot of the design around that was really cut-and-paste, playful colours,” he says. “There was a naïveté that was expressed with the colour palette that gave you this idea of kids playing. It was a reminder that I had always been into colour, and I had just lost it for a bit.” By the early 2000s, Dixon’s designs had emerged on the album covers of bands like Death from Above, Hot Hot Heat, and the Blood Brothers. (Dixon was also nominated for a Juno Award for his work on the packaging design for Said the Whale’s 2012 album release, Little Mountain.) 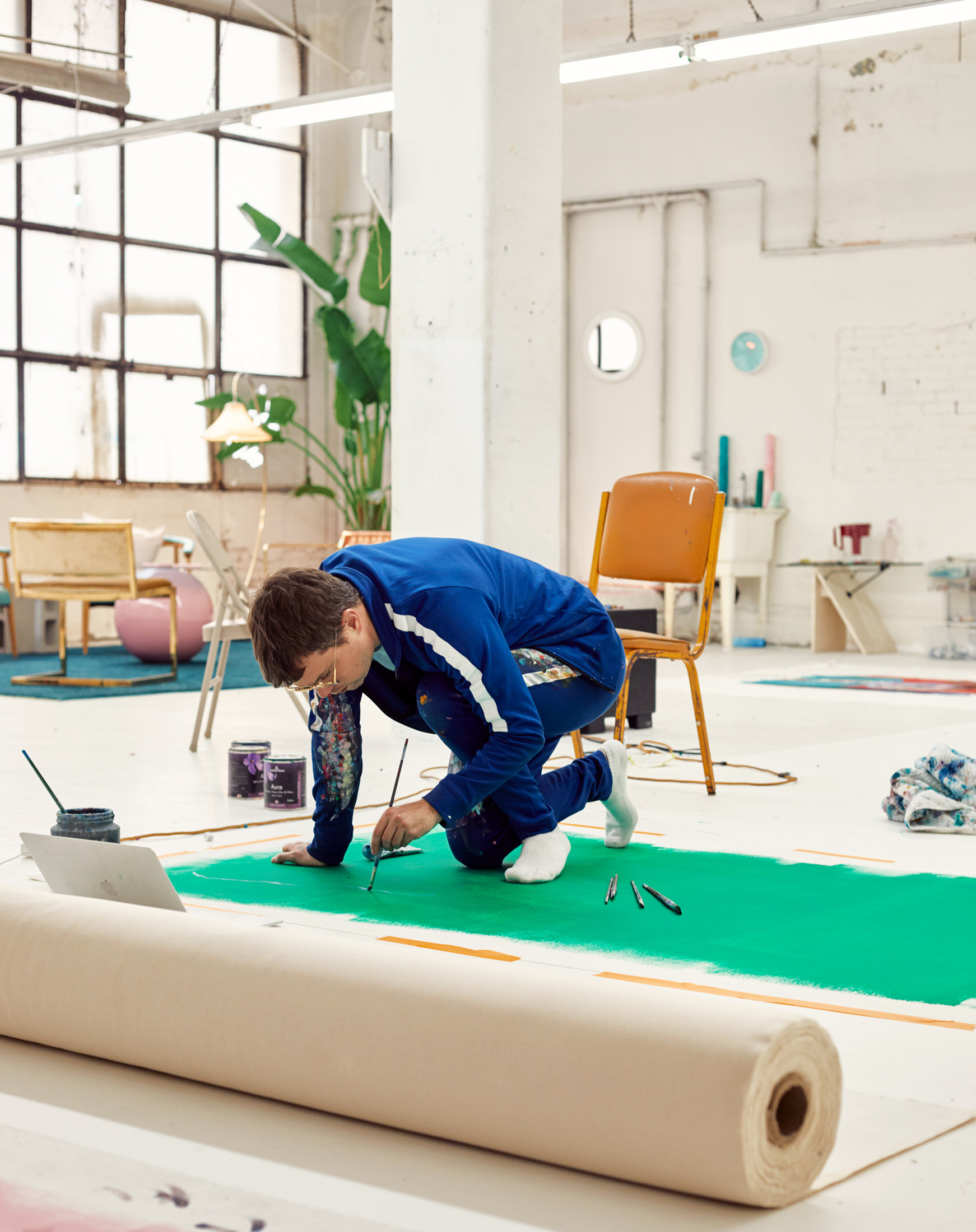 “It’s like the wild, wild west out here,” Dixon says of this particular frenetic moment in L.A.’s art boom.

In very Hockney-esque fashion, Dixon’s L.A. studio is furnished in the same vibrant, child-friendly colours, with vintage teal armchairs, a round baby-pink coffee table, and an array of leafy tropical houseplants. His studio space is part of a former movie theatre that now sits above a combination wedding chapel–travel agency (which also, conveniently, specializes in divorce); he found it through an ad on Craigslist and moved into it in January, sight unseen.

“I read a statistic that there are more people in California than in Canada,” says Dixon, listing vastness as one of the reasons he moved to L.A. At a sprawling 1,800 square feet, his new studio has allowed him to make the biggest work he’s ever made—the aforementioned Narcissus piece that measures 11 and a half feet wide and six feet tall. “I got in the space and thought, ‘I might as well take advantage of it.’ ”

Dixon looks forward to the other ways in which L.A. might evolve his practice. Since arriving in the city in January, he’s already seen the ways it might be the perfect place for his work. The contents of his paintings go well with its particular cultural landscape, not only the intensity of its colour palette, but how socially permissible flaunting markers of wealth can be—sports cars, designer sunglasses, and all.

When Dixon first considered moving to the U.S., the obvious choice was New York, where he had lived briefly in 2014. But the prospect of Los Angeles seemed infinitely more exciting. “It’s like the wild, wild west out here,” Dixon says of this particular frenetic moment in L.A.’s art boom. “I like how you can do anything here because no one has told you you can’t. New York is just so institutional when it comes to the art practice—there’s an established right and wrong way to do things. That’s great, but that’s not the right fit for me.” Despite outward appearances, the punk inside never dies. 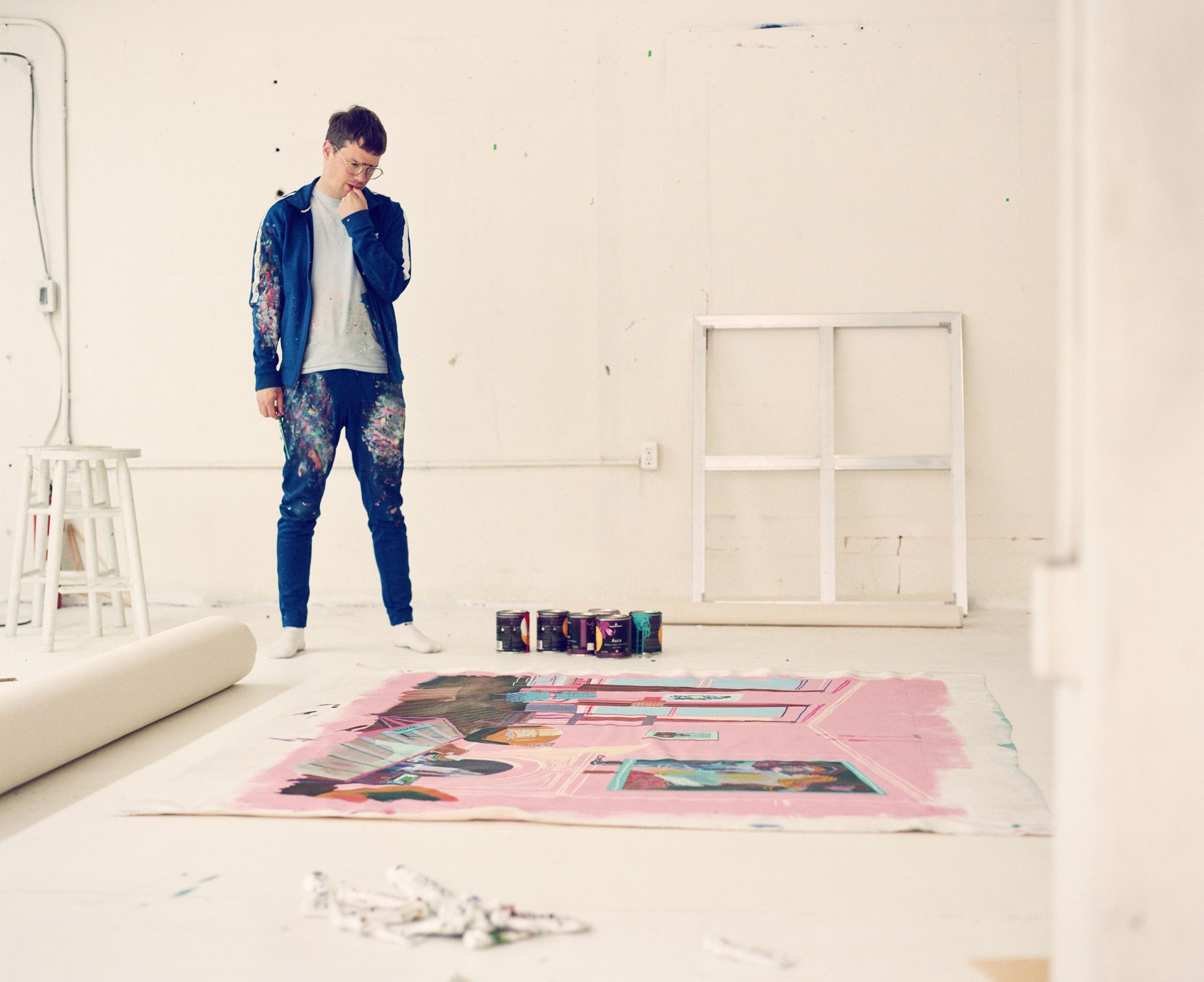 Author Pico Iyer Meditates on Love, Loss, and the Beauty of Life in Japan