When was the last time you saw an oval kitchen island? (It’s not a trick question.) The answer: ages, or maybe never. That’s because they’re not trendy. Big or small, topped with granite or marble, in a traditional or contemporary context, kitchen islands are typically rectangular. But Lori Morris, the force behind House of LMD, is not bound by convention; an oval statement island is a focal point in one of her recent kitchen designs. “I take an artistic approach to all of my work, so I don’t follow a template,” says the interior designer from her office at the Toronto headquarters of her company, which she started in 1987.

Together with a brigade of more than 30 creative colleagues, Morris brings a sassy, exuberant union of modern and traditional flourishes to dwellings in Ontario, Florida, Texas, and California. No matter the location, each project has its own uniquely luxurious, layered Lori Morris signature. Last year, House of LMD opened a fully kitted-out two-level showroom in Port Carling in Muskoka to serve members of the cottage community who prefer a dash of couture in their country dwellings, as opposed to the quintessential Canadiana trappings (think canoe paddles, Muskoka chairs, hokey signage).

Regardless of whether she’s designing a rustic house in the sticks, a straightforward kitchen island, or the material palette she employs, Morris has a renegade spirit. She refuses to follow the masses just because a certain look has been repinned ad nauseam on Pinterest, for example.

Instead, each project is informed by its architecture and is tailored just so. Which is why you’ll find a heady mix of materials in her designs, spanning eras and archetypes and making them truly classic. To give you an idea of Morris’s varied and adventurous scope, one need only peek into a house she revamped in an upscale Toronto neighbourhood.

Morris describes her creative thinking as a “big story, not a little story.”

Walk to its ravined rear and you can see the spring-like powder-blue parlour with its 11-foot ceilings. The space is festooned with “a sumptuous party of textures and patterns, and a pretty pastel palette of velvet, fur, silk, lace, and feathers,” says Morris. The beauty is in the balance—of supreme importance to this designer—because while the room is fulsome, it’s not foolish. You can still appreciate the towering trees beyond. “We made sure the windows were a focal point,” she explains, “so their mullioned designs stand proud.”

Morris designed every piece in the room (with the exception of the purchased ottomans), allowing her to fastidiously curate the space; it’s the way she always does things. Another compelling feature of the house is that it’s not homogeneous. “You can have a pretty pastel conservatory co-existing with a modern and dark aesthetic,” she points out. “It’s how you cohesively blend it together to create a harmonious balance that matters.”

Morris is referring to a sultry study down the hall. “The men’s lounge,” as she calls it, where one can imagine Mad Man Don Draper and his cronies revelling in a ribald round of cigars, Manhattans, and far-fetched fishing stories. Three types of marble electrify the fireplace, giving it a dynamic presence. Meanwhile, high-gloss black fretwork ensconces the darkly dramatic digs, which feature flannel, velvet, and fur furnishings, suede walls, and a gorgeous vintage brass deco-inspired chandelier glamorously taking pride of place in the room. 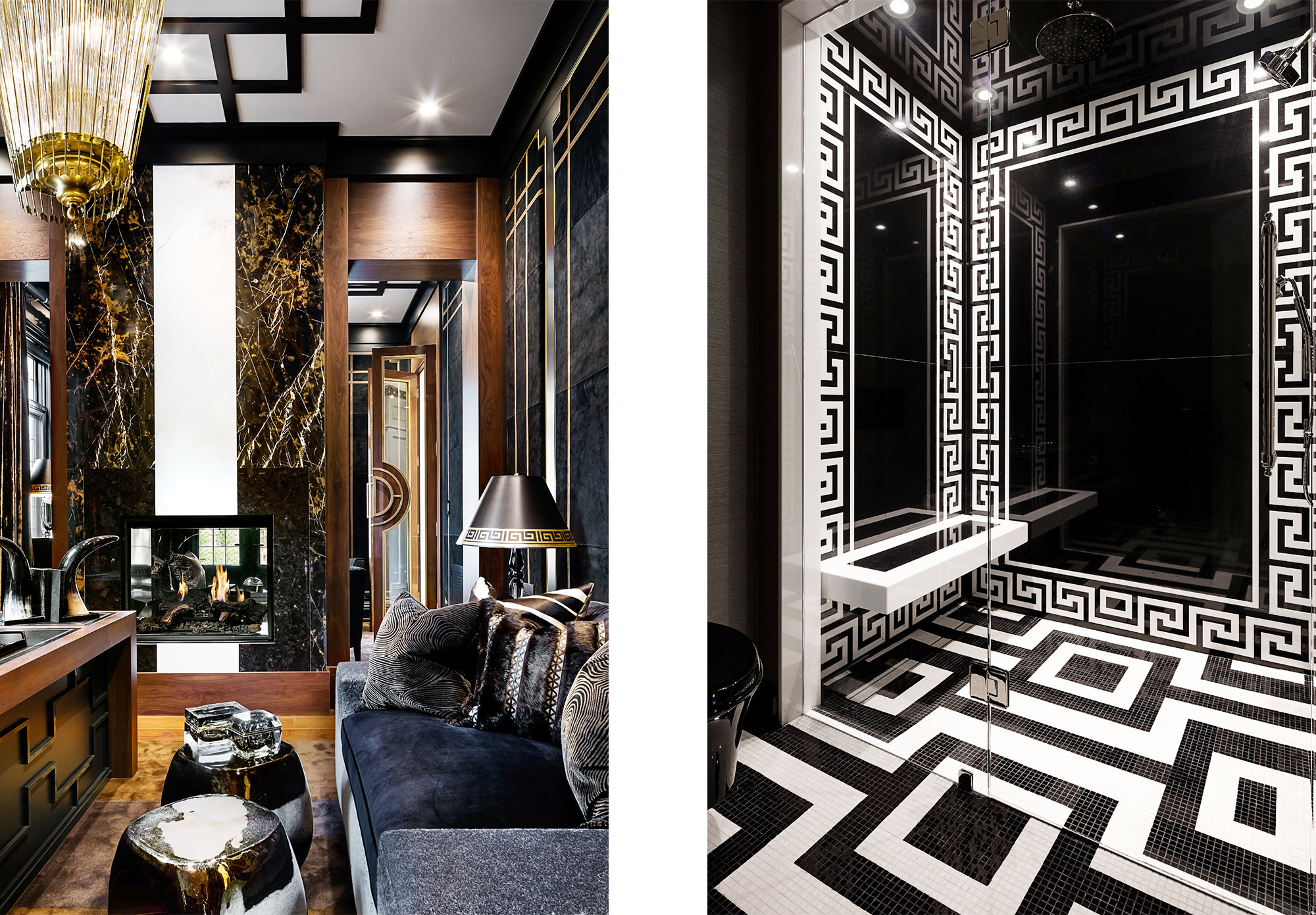 Dark and dramatic digs designed by Morris. Her designs today are a far leap from Morris’s more modest early days.

It’s quite the leap from Morris’s modest early days, that’s for sure. The first room she assembled was a tad more humble. “I was 10, and I remember being interested in design and having definite ideas as to how my room needed to look. It came very naturally to me,” Morris recalls. She points out that the compulsion to create never went away. “Whether it was my dorm in university or my first apartment, I was always concerned with the design savvy of my living space,” says the designer, who earned degrees at York University and the International Academy of Merchandising and Design (today called the Academy of Design at RCC Institute of Technology).

As her tastes matured, she eschewed the uniform and the bland, preferring a feistier, more artful aesthetic. “I love colour, texture, and the eclecticism of different genres,” says Morris, who often compares her designs to paintings. She calls her design aesthetic “sexy French” and adds, “It’s a style I invented that balances French classic and modern elements.”

Her very own kitchen captures that racy je ne sais quoi. Its mix of materials is a refreshing departure from the one-note norm, where white kitchens dominate. Here, warm walnut is enhanced by cream-lacquered armoires that conceal the fridge and freezer beside an archway, while an antique mirrored French table with a carved base has been swapped in as an island (there she goes having her way with islands again). Above it, a whimsical puff of a metal mesh chandelier from France has both functional and sculptural merit. 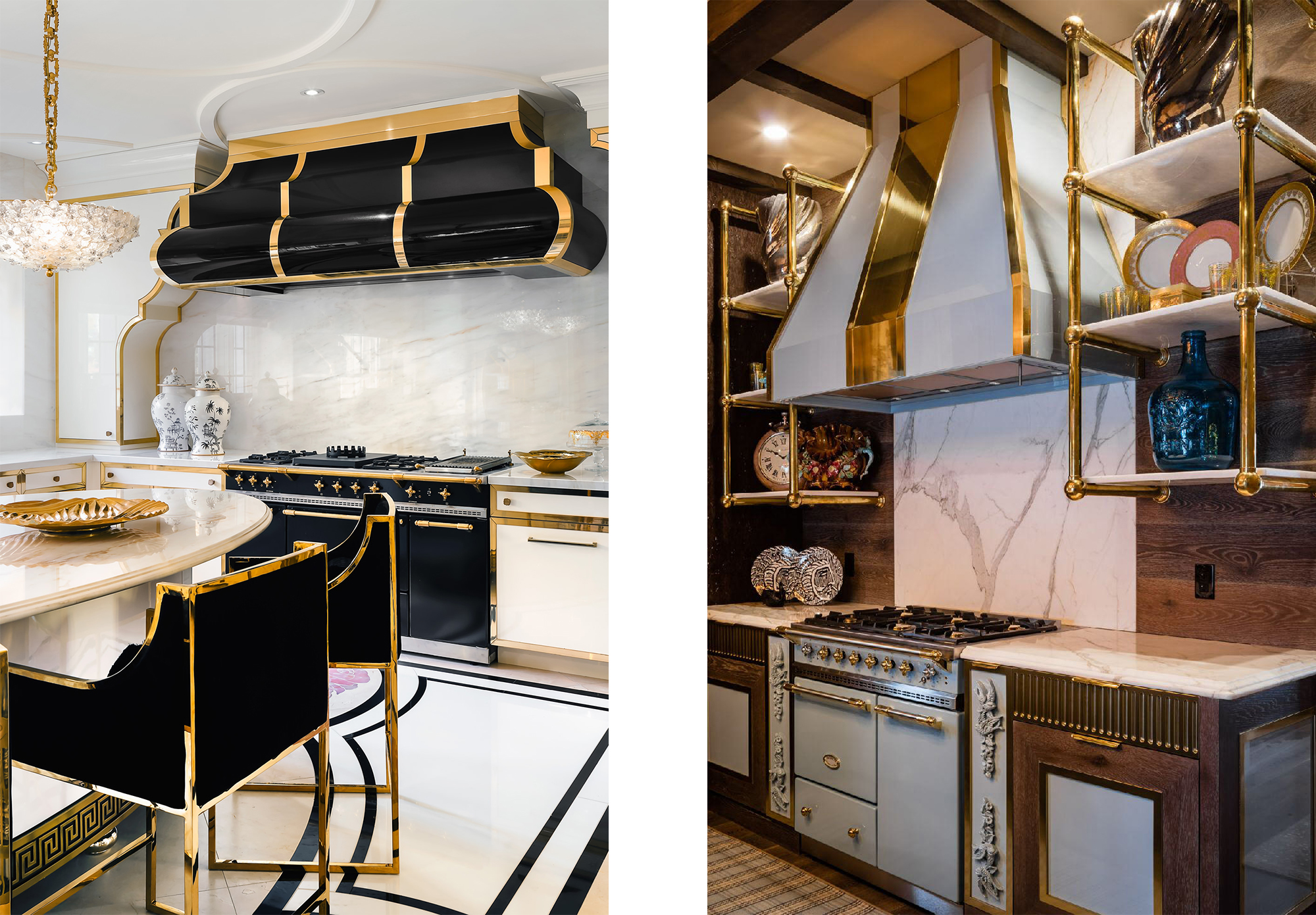 Lori Morris of House of LMD puts exquisite detail in her work. Here, what Morris calls a “couture kitchen.”

Another of the designer’s spectacular kitchens is a portrait in lustrous black and gold with exquisite details such as the abundance of gold trim, including over an undulating hood vent, itself recalling the folds of a turban or a tureen. “We call this kitchen a couture kitchen. If you were making a couture gown into a kitchen, it would grow up into this,” Morris quips.

As with all of Morris’s multi-faceted spaces—including a luxurious black and white marble slab statement shower that boasts a laser-cut Greek key design—this kitchen is made for lingering, chatting with friends over a charcuterie board and good wine, and perhaps noticing design details illuminated only after you’ve whiled away the hours here (yes, those are pink onyx rose details in the floor).

It happens all the time, Morris says. “You could look at one of my spaces for so long and notice something suddenly. We often have clients call us months later and say, ‘I just noticed this.’ ” She adds of her creative thinking in general. “It’s a big story, not a little story. It takes layers and layers to create the painting of each space.” Alexandra Gater Is Changing How Renting Millennials Do Interior Design