At 11 a.m., the Balinese air is still cool enough for a thoughtful walk through the jungle. Large black butterflies drift between the banana and coconut palms, and a turquoise kingfisher streaks along the river. Here, nature works harder than in temperate climates, with rain like an onslaught of needles and flowers as luminous as neon. Nature works faster too, pushing bamboo shoots from chest level to a metre above head height in just over a week. Growth rate aside, bamboo is a miraculous material, sturdy enough to be used for multi-storey scaffolding, flexible enough to weave into baskets, and ecologically close to perfect, since it can be harvested every three or four years. This sustainability and the lessons it teaches are at the core of what John Hardy does. Environmentalist, subversive communicator, and public speaker, founder of a successful jewellery company and the world’s greenest school, he fits no single category. 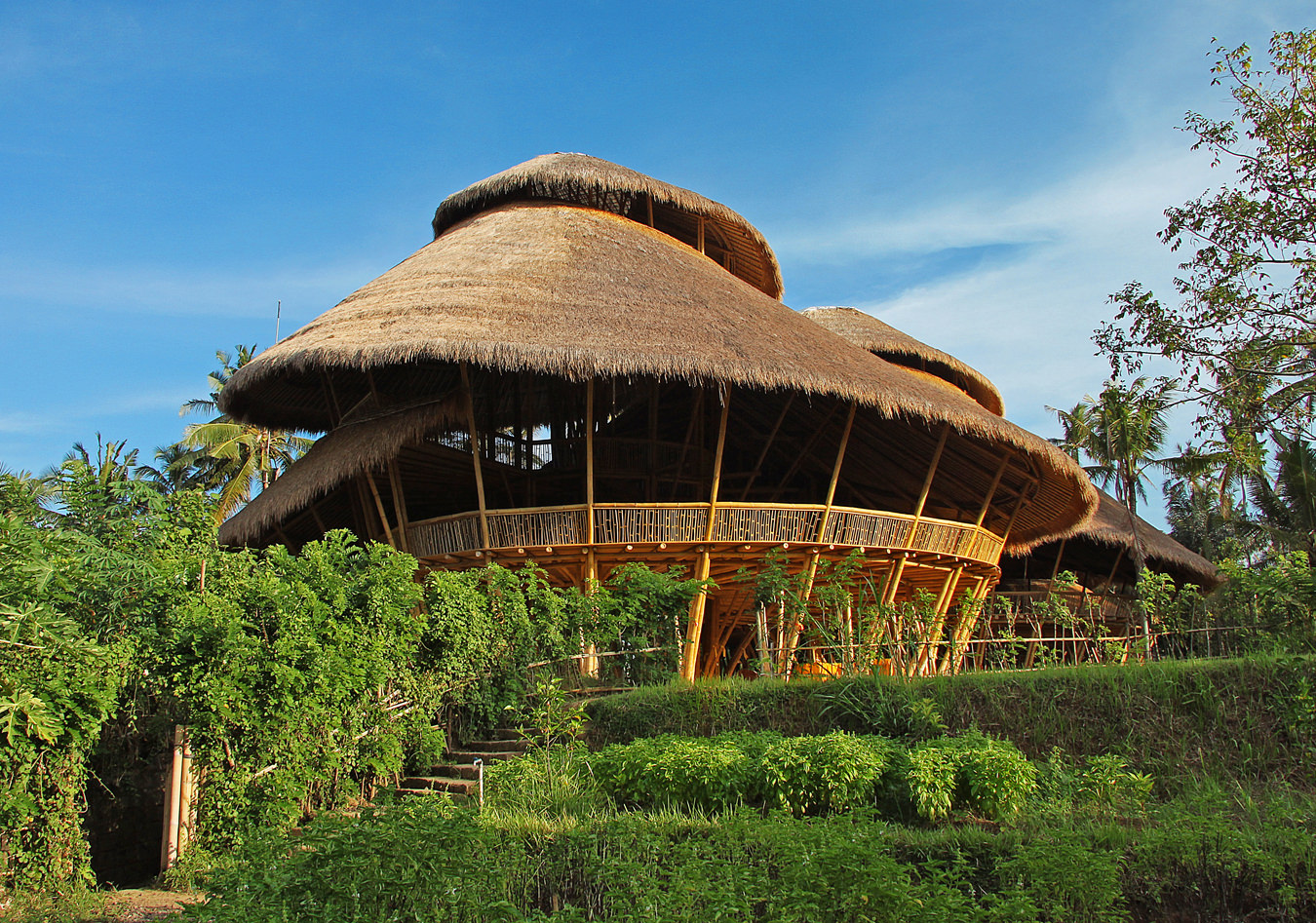 Hardy grew up in small-town Ontario, and by the age of six he was working in his grandfather’s general store. He didn’t excel at school, but nonetheless took up business studies before seguing into art at Ryerson Polytechnical Institute, “just doing it” with no particular goal in mind. Eventually, Canada’s weather provoked what became a permanent move to Bali. Some years ago, Hardy called his native climate “unfit for man or beast,” and time has not softened his opinion. “You wake up in the morning and it’s grey and the ducks are committing suicide in the park.” No wonder a tropical island sounded seductive, especially one so unknown and unspoiled. Back then, in the mid-seventies, Bali had “no electricity, telephone, or TV,” Hardy recalls; communication meant hand-written aerogrammes.

It was, and remains, idyllic. Besides lapis-blue skies and searing heat, the “pearl of Indonesia” offers vivid green jungle, moss-furred temples, and a tradition of aesthetic sensitivity so profoundly ingrained that the Balinese language literally has no word for art, and the term for artist is synonymous with the one for person. From rice terraces so graceful they are now UNESCO-protected to exquisitely patterned sarongs, everything in Bali opened Hardy’s eyes. What beguiled him most was the artisanal skill behind the jewellery. Making a long story short, he began working with local craftspeople and then, with his American wife, Cynthia, founded a company that drew increasing acclaim and clients. In 2007, he sold his share in the business that still bears his name (and continues his ecological stance; since 2012, all of the jewellery has been made from recycled silver). 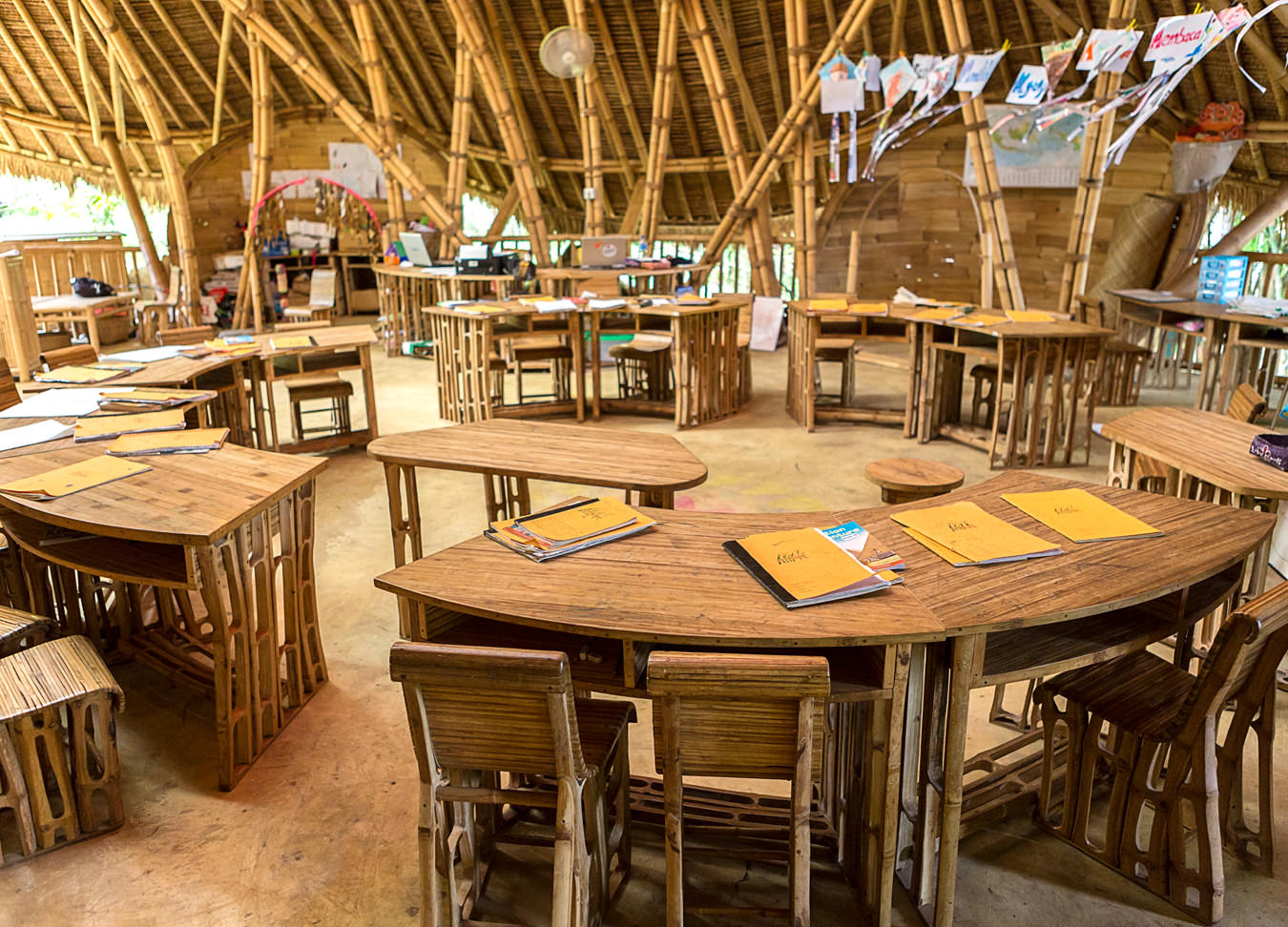 Classrooms, desks, seating, signage—everything at Green School is made of bamboo. Photo by Marc Romanelli.

“Never had a job. Never going to retire,” says Hardy, and he was not about to start slowing down. In 2006, Al Gore’s An Inconvenient Truth, a documentary describing the former U.S. vice-president’s efforts to raise awareness about global warming, fired up Hardy’s imagination—and hit home. He had four children, two being homeschooled and two attending “more conventional schools [and] they had the school of life in Bali, which truly influenced them.” Today, his children are pursuing creative paths, with daughters Carina and Chiara studying art in London and attending an innovative high school in New York, respectively. Son Orin co-founded and runs the Kul Kul Farm, where he teaches permaculture courses (and which runs the Green School gardens). The eldest, Elora, is creative director of Ibuku, a design-build team that produces bamboo structures and furniture, as well as ethically minded landscaping.

Environmentalist, subversive communicator, and public speaker, founder of a successful jewellery company and the world’s greenest school, he fits no single category.

What if, thought Hardy, he took a holistic approach, masterminding a school where every aspect was centred on raising a generation of green citizens? Germinating over the next two years, the concept came to fruition in 2008 when Green School opened with 90 students not far from the artistic hub of Ubud. A non-profit, private, and international facility, it spans pre-kindergarten through high school, teaching the basics within a framework of environmentalism.

Even at a glance, this bamboo-built school in the jungle looks different. Hardy describes it as “a new approach to sustainable architecture.” First came a 22-metre bridge across the sacred Ayung River, which flows past the 20-plus-acre grounds. Pavilions and curvilinear buildings dot the campus; none have walls. Administration, library, computer lab, and other facilities are all housed in the Heart of School, an organic series of interlocking structures 60 metres long and 19 metres high. Evoking the childhood magic of tree houses, Narnia, and a touch of Indiana Jones, this storybook setting is a mashup of every adventure tale ever. Classrooms, desks, seating, signage—everything is made of bamboo.

Today, the school has 420 full-time students: “Ten percent Balinese kids on scholarship. And 350 kids from local schools do after-school programs [here],” says Hardy. Green School offers “a very fluid curriculum—math, English, but the way it happens is different.” Art class can mean building bamboo bikes. School gardens bulge with vegetables grown on permaculture principles of working in tandem with nature. The school worked with the Begawan Foundation to establish a breeding program for the endangered Bali starling. What better way to learn biology? Students have gained experience doing a cost-benefit analysis and marketing through developing a Bio Bus as a social enterprise: three are now in operation, all fuelled by used cooking oil sourced from restaurants (with the residue turned into soap). When they’re not needed for school, the buses are available for hire.

Unrestrained, bamboo roots wander freely, sending up shoots wherever they can, an apt analogy for Green School and its relationship with the Balinese community, and eventually, Hardy hopes, the planet at large. Two students, sisters Melati and Isabel Wijsen, launched the Bye Bye Plastic Bags campaign, which has led to a ban in Bali by 2018 and a movement that has already spread to Australia, Guadalajara, New York, and Nepal. “We’re looking for kids that are passionate,” says Hardy of Green School. He tells the story of an 11-year-old from Europe who was so concerned about the environment that, as much as he could, he travelled overland to Bali to minimize his carbon footprint. Students hail from 33 countries; many parents, Hardy says, relocate to the island and telecommute in order to be close to their children. “The idea was kids would walk to school,” he says of Green Village, the community within walking distance of Green School that he developed in partnership with his daughter, Elora. It’s an enclave of 18 houses with five more under construction where the homes are embedded in the precipitous banks of the Ayung. Far removed from the usual idea of a bamboo hut, a series of open pavilions jut into the air, with not just the expected walls and roofs made from bamboo, but even thousands of “nails”.

Unrestrained, bamboo roots wander freely, sending up shoots wherever they can, an apt analogy for Green School and its relationship with the Balinese community, and eventually, Hardy hopes, the planet at large.

In the nine years since it opened, Green School, says Hardy, has “got better and better. [It’s not] producing a long line of corporate robots.” A dream setting, a groundbreaking syllabus—it all raises the question of whether this approach to education prepares students for the real world. Hardy says there are 16 grads this year. “They go on to everywhere. Liberal artists,” and, he adds, “the odd scientist.” A 2016 graduate, Elle O’Brien from Florida, attended an academically focused school until she was 14. “It was all about performance and grades,” she says. Top of her class, she was completely frustrated until a chance e-mail connected her with Green School. 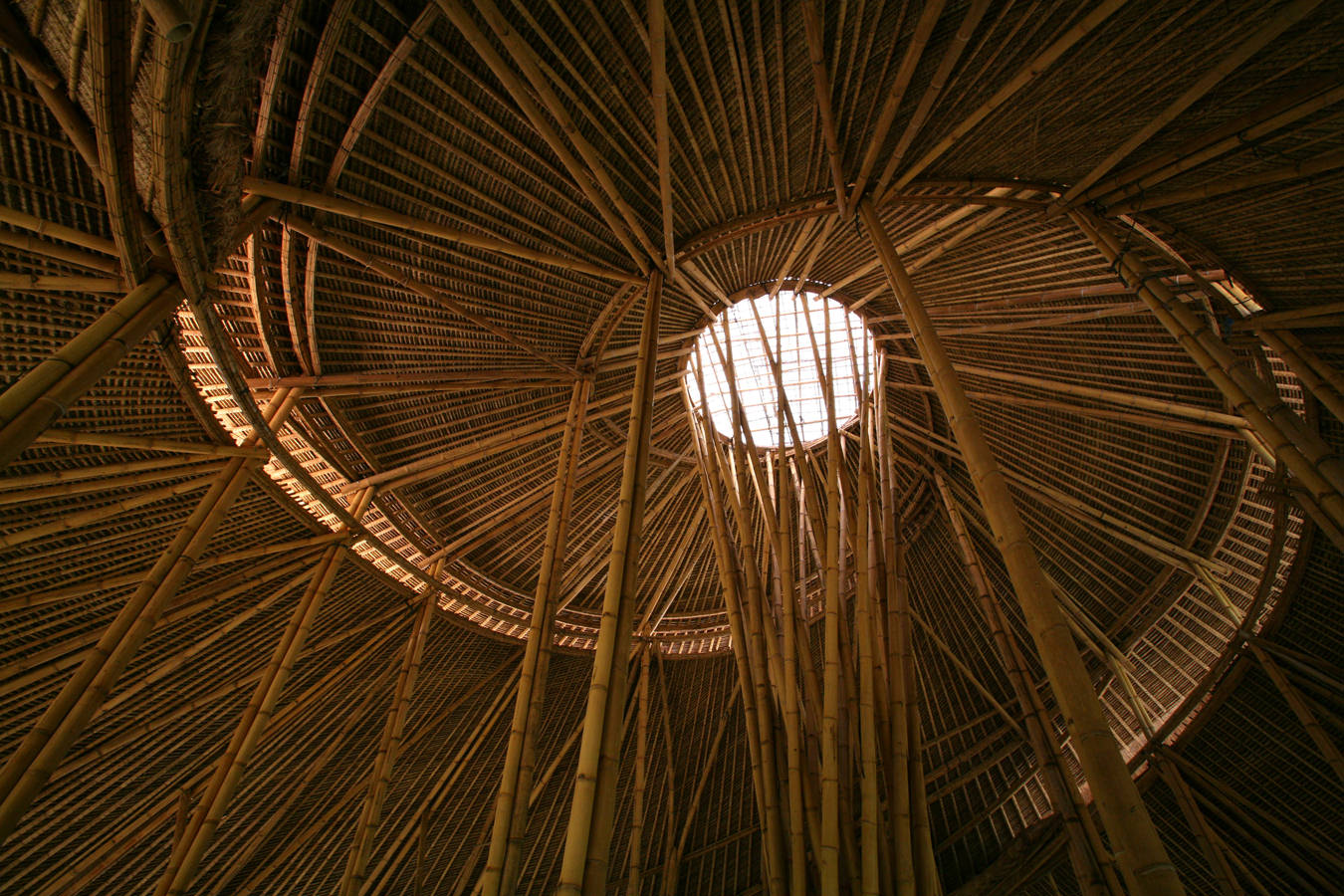 The school amazed her, she says. “It felt like I’d walked into a family.” O’Brien praises her education for having “none of the social situations that a conventional school creates.” Some classes stand out. An average math class was put through the lens of climate change. Her passion for surfing came under sports. “I was crying at graduation. I didn’t want to leave.” O’Brien has plans to study at Quest University in Squamish, B.C., this September, with plans to pursue alternative medicine.

Recently, Hardy has been in discussions about opening Green Schools outside Bali and he is in the process of building a school in Tulum, Mexico. He is working on ideas in New Zealand and, surprisingly, Budapest, in a massive old building that will house a bamboo structure inside. “We build around trees,” adds Hardy, citing Green Village homes where coconut palms protrude through the roofs.

The same river that rushes below these striking bamboo pavilions also flows past Bambu Indah, the nearby boutique hotel curated by the Hardys. Ten or 12 years ago, Hardy relocated a number of traditional teak houses that would have originally been built as Javanese bridal homes, and turned them into guest rooms. The hotel speaks the same design language as Green School and Green Village, except for the bamboo structure based on a mine elevator that lets guests descend to two new houses built on land by the river. 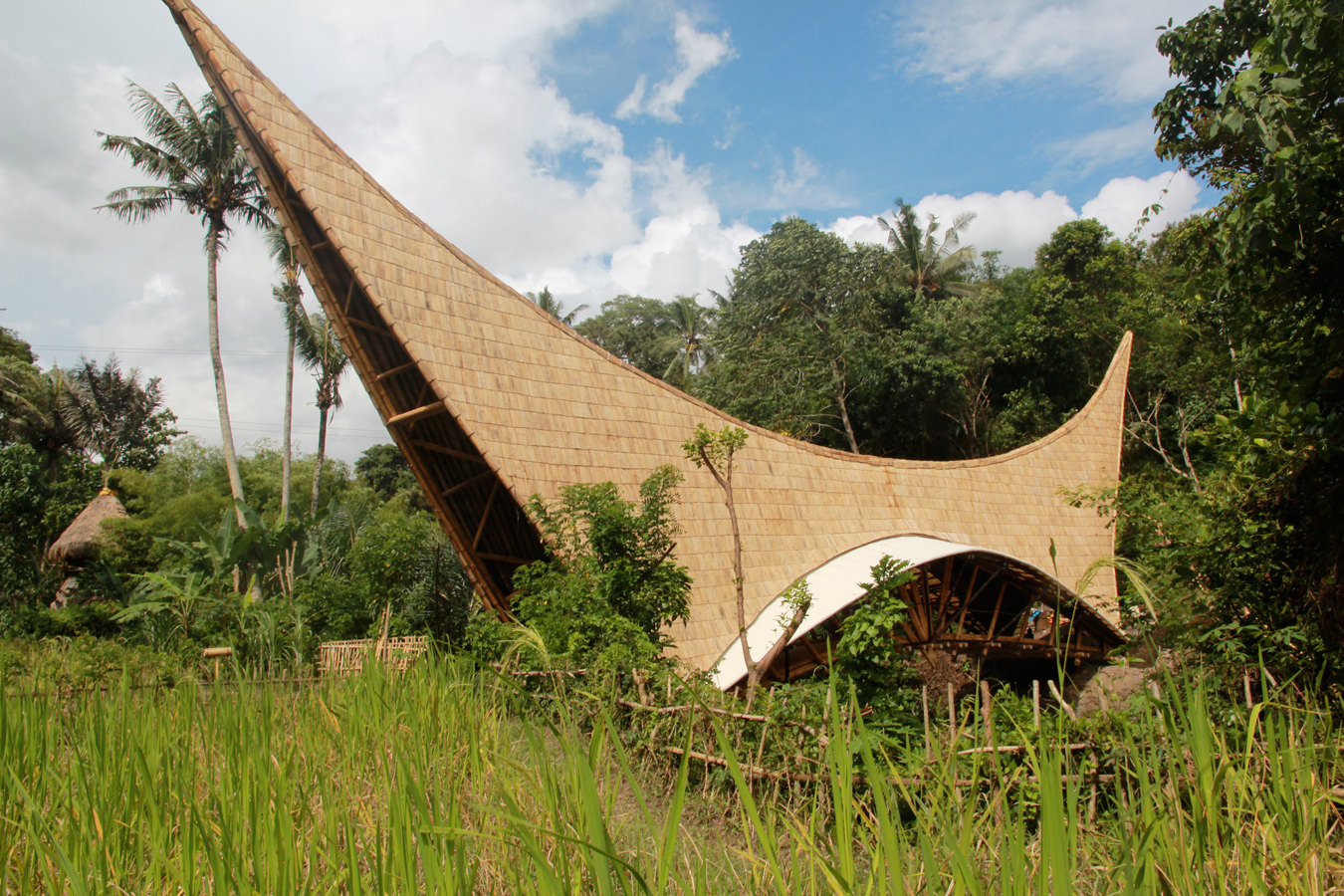 The School’s bamboo bridge spans 22 meters across the Ayung River.

Flourishing vegetable gardens feed the Bambu Indah restaurant, whose kitchen, with its softly lit circular work islands and jar-filled shelves, does not remotely merit the word commercial. Explains Hardy. “Food is made by women from the village. No superego in a tall hat. To build [such] a beautiful kitchen wouldn’t be allowed in England.”

Permaculture is always part of the picture. “Land is for growing, for fruit trees,” Hardy says, naming the victory gardens of the Second World War and the increasing popularity of “allotments” as examples of what can be achieved. What cannot be duplicated outside a less-than-tropical climate are open-sided bamboo structures, but many Green School elements could be incorporated into conventional schools, says Hardy. “The first one would be water. Buy a good quality water container and you have it forever. No plastic bottles allowed on campus. No single-use containers in the school. Everything is served on banana leaves. Straws are made out of papaya stems.”

In Canada, he says, “They’re living a completely unsustainable lifestyle … at the expense of their grandchildren. We’re creating green leaders. Every school [now] is studying green.” The difference at his school in the Balinese jungle, he explains, is that “kids are living green.”

A Sailing Adventure in Indonesia