As early as 3500 BCE, astronomers in Egypt realized the regular cycles of orbiting celestial bodies could serve as a foundation for timekeeping. Using obelisks, they created shadow clocks and eventually sundials. In 1900, divers discovered a Roman shipwreck off the Greek island of Antikythera containing what is now known as the Antikythera mechanism. Dating back to about 150 BCE, the astonishing mechanical computer could calculate astronomical phenomena such as eclipses. The Antikythera is regarded as the ancestor of the medieval astronomical town clocks in Europe, while other astronomical devices emerged in China as early as the 10th century and in the Middle East in the 13th century. 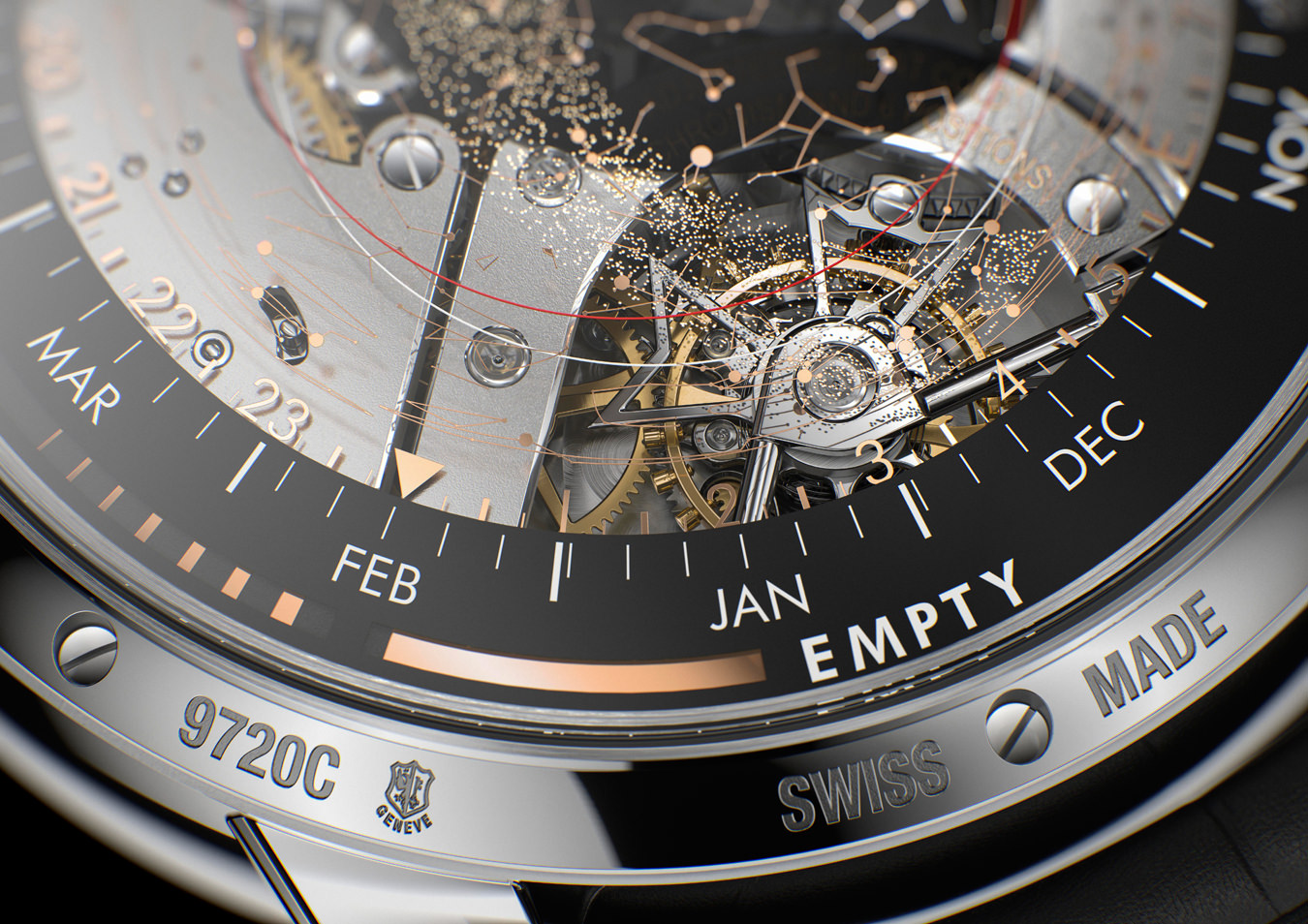 Composed of two superimposed sapphire discs, the Celestia’s back dial reveals a translucent map of the sky.

At its very essence, time is rooted in the cosmos. During the Renaissance, astronomical pocket watches miniaturized those town clocks, allowing the elite to carry them in their pockets. And in the 18th century, astronomical pocket watches became advanced with more detailed data, such as star charts and the arcane “equation of time”, which is the discrepancy between mean solar time (measured by clocks) and true solar time, based on the actual position of the sun. Due to the Earth’s elliptical orbit and the time of year, these two times can vary significantly. In the modern era, the ability to fit astronomical functions into the slim confines of a wristwatch is a testament to a watchmaker’s mastery of the craft.

With this year’s unveiling of the Les Cabinotiers Celestia Astronomical Grand Complication 3600, Vacheron Constantin flaunts its technical cred with a unique piece that advances the state of the art. With 23 mostly astronomical complications displayed on the front and back, the Celestia is the most complicated wristwatch the maison has ever produced, and it ranks among the most complicated wristwatches in the world today.

“We wanted to demonstrate, showcase, and create from scratch a watch fully dedicated to astronomical complications,” says Christian Selmoni, artistic director at Vacheron Constantin. “We are paying tribute to astronomy and watchmaking, and recreating the link between today’s watchmaking with miniaturization and high technicality, and the original notion of measuring time with the observation of planets and stars.”

In the modern era, the ability to fit astronomical functions into the slim confines of a wristwatch is a testament to a watchmaker’s mastery of the craft.

Celestia breaks new ground with an elegant, fully integrated movement that packs 514 components into a mechanism measuring only 8.7 millimetres thick. And it goes to extremes with functions that include a running equation of time, sunrise and sunset, length of day and night, seasons, solstices, equinoxes, zodiac signs, tide levels, alignment of the Earth, moon, and sun, and, on the case back, an ethereal celestial chart for the northern hemisphere that shows the Milky Way. 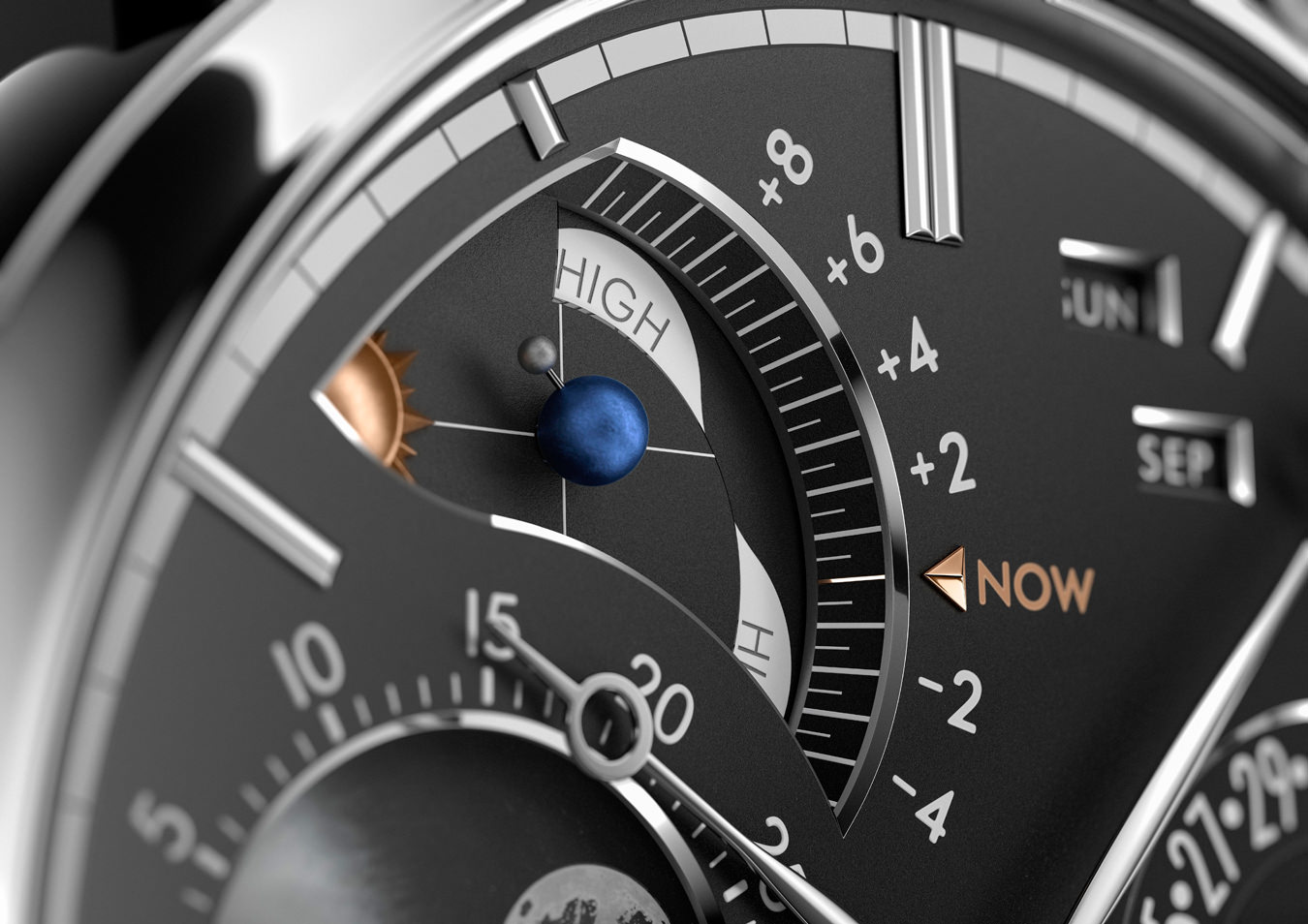 A close-up look at the 3D depiction of the Earth, moon, and sun alignment.

“In regard to innovation, we have some very complicated, sophisticated ways to showcase these complications,” explains Selmoni, who notes the calibre’s three dedicated gear trains for mean time, solar time, and sidereal time, which measures time based on the Earth’s rotation relative to fixed stars rather than the sun. The patent-pending running equation of time is linked to an elliptical tropical gear train that serves as a highly accurate solar gear train. “It’s all about having a huge number of astronomical complications but also having great care for precision,” Selmoni adds. The Celestia may come from a long line of historical clocks and pocket watches, but its aesthetic is resolutely modern and surprisingly legible considering the dazzling array of information presented on its dual dials. Additionally, six barrels endow it with a three-week power reserve.

Vacheron Constantin spent five years developing this horological tour de force as a showpiece that makes a powerful statement about what the company is capable of producing for patrons of its Atelier Cabinotiers special order department. The new movement will serve as a supercomplicated platform on which to build future commissions, since the unique piece is already spoken for.

“Space and time are simply inseparable,” says Pascal Raffy, owner of Bovet 1822, a historic marque that has been revived under his direction. “The foundations of time measurement base themselves on the observation of space. Reciprocally, space observation was able to progress by basing itself on always more precise time-measuring instruments.”

Bovet followed up last year’s Récital 18 Shooting Star with the Récital 20 Astérium, featuring a 10-day flying tourbillon and a night sky annual calendar. The centrepiece of the dial is a realistic sky chart of stars and constellations that has been laser engraved and coated with luminous Super-LumiNova on a dome of translucent blue quartz. Watchmakers also devised a sidereal calendar charting the sidereal year—the duration of the Earth’s orbit, 365.25 days. The Gregorian calendar adjusts for this discrepancy by rounding down the number of days in a year to 365 and adding an extra day every four years. In its quest for precision, Bovet used a 365.25-day cycle to guide Astérium’s night sky and sidereal indications, so the watch follows the actual orbit of the Earth.

With 23 mostly astronomical complications displayed on the front and back, Vacheron Constantin’s Celestia ranks among the most complicated wristwatches in the world today.

“This is the very notion of the Astérium: to express time up to the absolute accuracy of its spatial reality by integrating a romantic vision with an almost spiritual dimension,” explains Raffy, who notes that both watches articulate the future of watchmaking while maintaining respect for age-old traditions and skills.

By contrast, Jacob & Co. is a radical newcomer that launched its first luxury watches in 2002. Three years ago, the brand introduced the striking Astronomia Tourbillon with a gravitational triple axis, which was inspired by those ancient astronomical tower clocks. Last year, the Astronomia collection evolved with the Astronomia Sky, featuring an unprecedented three-dimensional sidereal display combined with an oval sky indicator and a 24-hour day/night display. 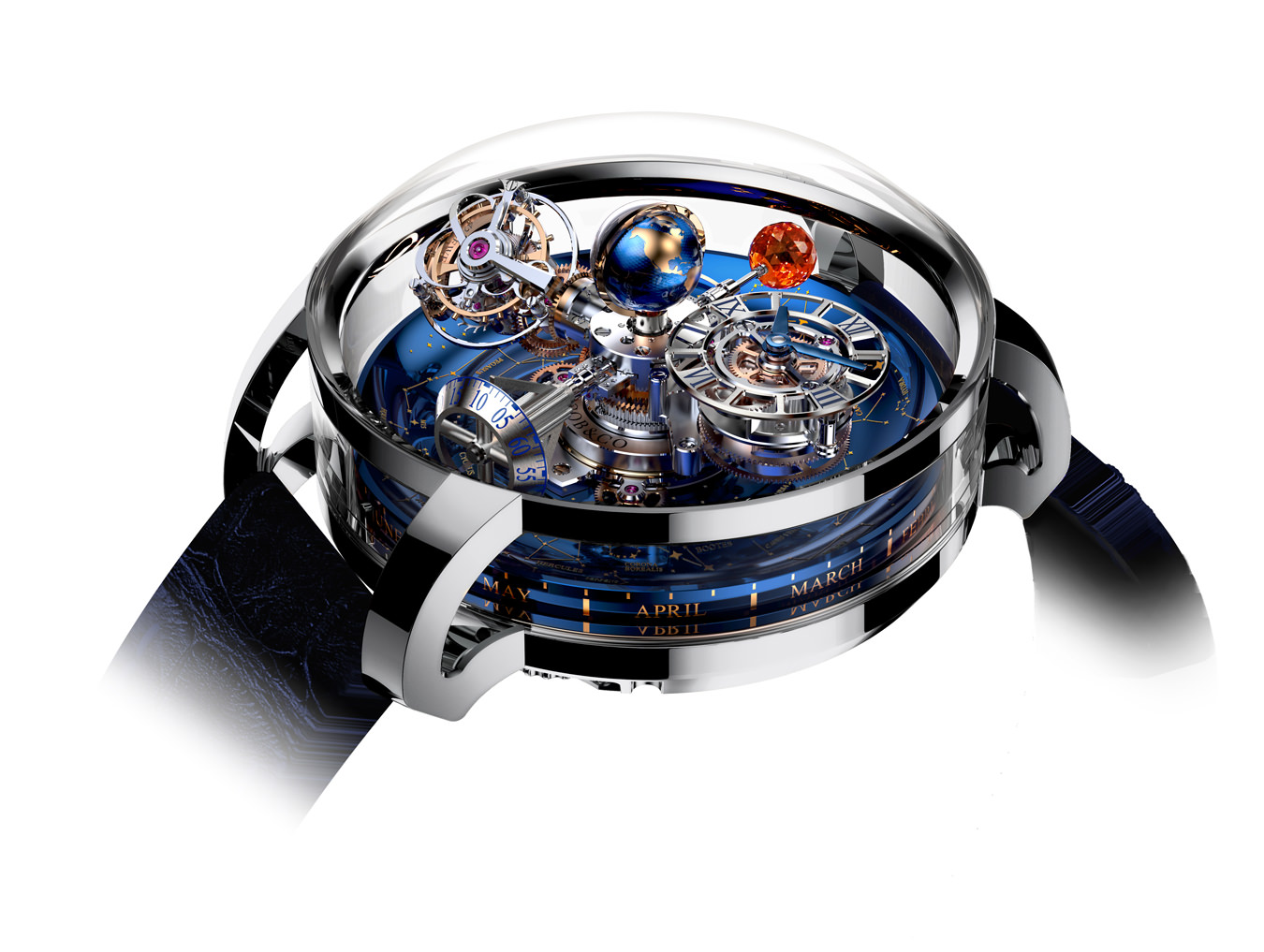 To fully appreciate this dynamic timepiece, it needs to be seen in motion. Under an expansive sapphire crystal dome, the celestial dial, which completes a full turn in a sidereal year, is crafted from blued titanium appointed with gold stars and hand-engraved signs of the zodiac. Positioned above the dial, the oval sky indicator displays the stars that are visible in the northern hemisphere. This elliptical portal into the night sky completes a full rotation in one sidereal day, or 23.5640916 hours—the actual time it takes for the Earth to rotate once on its axis. A lacquered, hand-engraved globe at the centre of the movement’s satellite axis rotates on itself in a tinted half-domed sapphire to indicate night and day. The orbital movement’s four satellite arms circle the dial every 20 minutes. One arm hosts the triple axis gravitational tourbillon, which rotates on one axis in 60 seconds and on the second axis every five minutes. The second arm holds the hours and minutes display, which uses a special gearing system to assure the 12 o’clock position remains upright as the satellite turns around the dial. The third arm has the orbital second hand, a spinning, vertical open-worked titanium wheel that completes a turn every 60 seconds, while the fourth arm is appointed with a spherical faceted orange sapphire “red moon” that also rotates on its axis every 60 seconds.

It’s understandable if all this rotating and revolving makes your head spin. Accordingly, Jacob & Co. has devised a user-friendly application for your smartphone that assists you in setting your Astronomia Sky with precision. It’s a high-tech fix for a complex watch that traces its roots back to the Middle Ages.