The word concrete is practically synonymous with grey. Heavy and dull, it lumbers off the tongue, evoking oppressive structures and industrial austerity. At first glance, concrete is an uninspiring medium—practical, yes, but innately cold and inflexible, and certainly not aesthetically exciting. Which makes it interesting that at Edmonton’s Concrete Cat studio, the material transcends its mundane reputation and is suddenly recast as the star of the show. 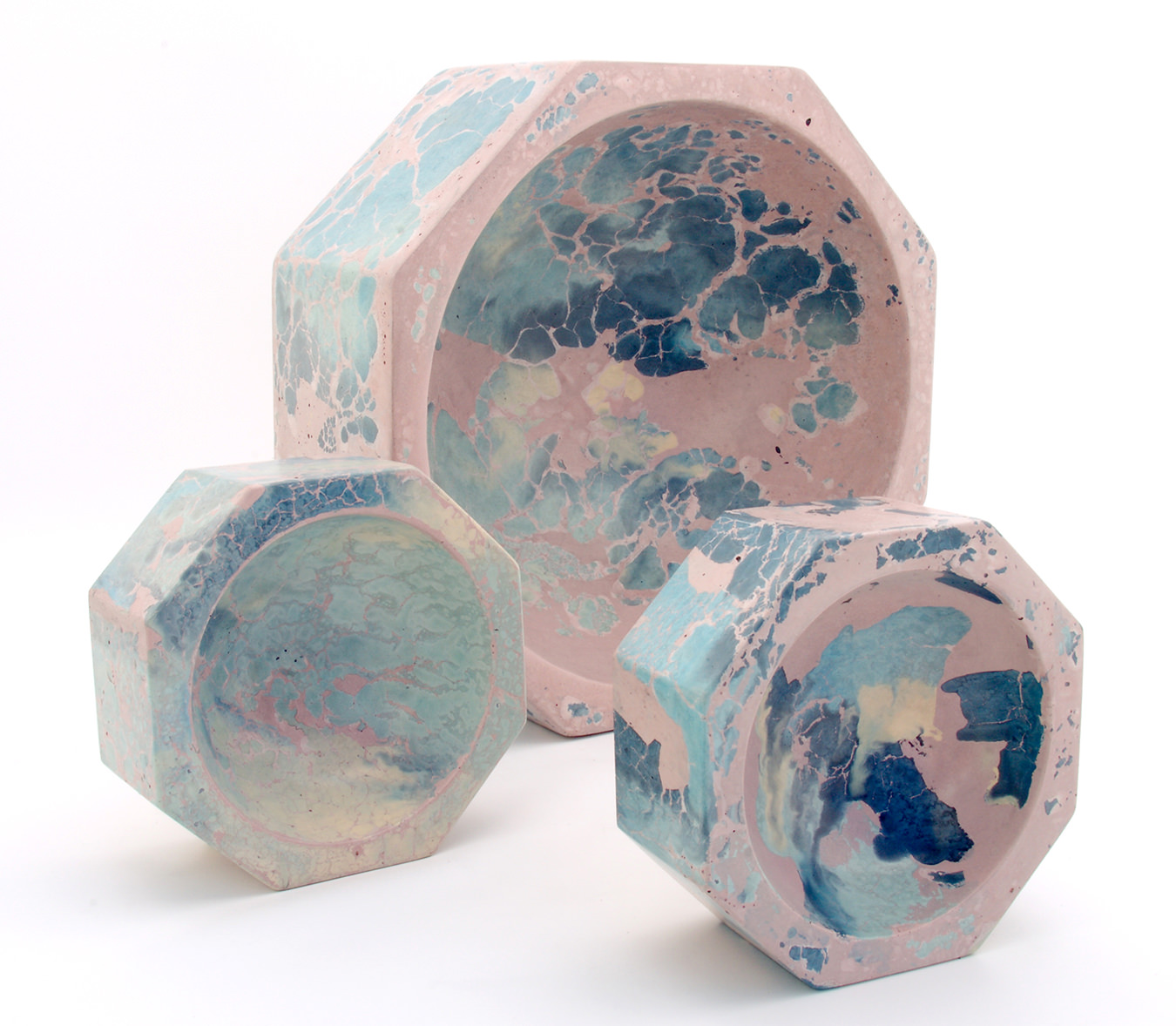 “When I was finishing my university degree, construction was how young men made money in this city—and I fell into it,” says Matt Heide, 36, who founded Concrete Cat in 2007 and runs it with his wife, Shawna. Upon graduating with a degree in literature from the University of Alberta, Heide, who’s lanky and long-haired and has a scholarly air, began a contracting business and ran it conventionally for about two years. “Then it got to the point where it was like, ‘What’s next?’ ” he says. “I get bored easily; I wanted to do something new.” So Heide began to experiment with coloured concrete, a move that had his construction-work contemporaries clutching their pearls. “We saw the biggest pushback when we started moving into colour,” Heide says. “I had lots of business mentors who told me it wasn’t going to fly. I was told people don’t want colours, don’t want patterns, and I ignored that advice.”

That’s when Heide began honing Concrete Cat’s Oracle patterning technique, a self-taught hybrid method that draws on elements of paper marbling, collage, and a bit of destruction and reconstruction (Heide keeps the particulars mysterious) to create patterns reminiscent of mineralization but in really poppy colours. “There isn’t anyone else that’s doing the same type of patterning work,” he says. “It’s our biggest selling point.” Concrete Cat still works in neutral and solid colours, but its Oracle-patterned products are immediately indicative of the care with which the studio approaches its medium. They swirl with unlikely tie-dye colour combinations, as though carved from some sort of fantastic metamorphic rock.

“I like to think of our work as having a sci-fi and fantasy element to it that’s inspired by classical Greek culture.”

“Our mineral-based pigments are mixed integrally—if you were to cut any of these pieces in half, the colour would be throughout,” says Heide. “The nice thing about the colour not being topical is if the product is damaged, we can fix it.” Inside the Concrete Cat studio on the east end of Edmonton’s Whyte Avenue, marked externally by a cute feline silhouette (“I really, really, really like cats…” he laughs. “It’s kind of dorky.”) Heide demonstrates mixing ultramarine pigment into a taupe concrete slurry until it turns the colour and texture of a frosty blueberry smoothie. “It should sort of feel like ice cream,” he says, pouring the mixture into the mould for a receptacle he’s named the Octavia bowl. “Most of our products don’t have a purpose, they’re purely decorative,” he says. “People use them for specific things, but we don’t sell them with an intent in mind. I like having people get back to me saying, ‘Oh, I got this Vesta vase. I use it as a doorstop and I stick my umbrella in it,’ or ‘I use it for my paintbrushes.’ It’s fun to see how people use things when you don’t give them an idea first.” 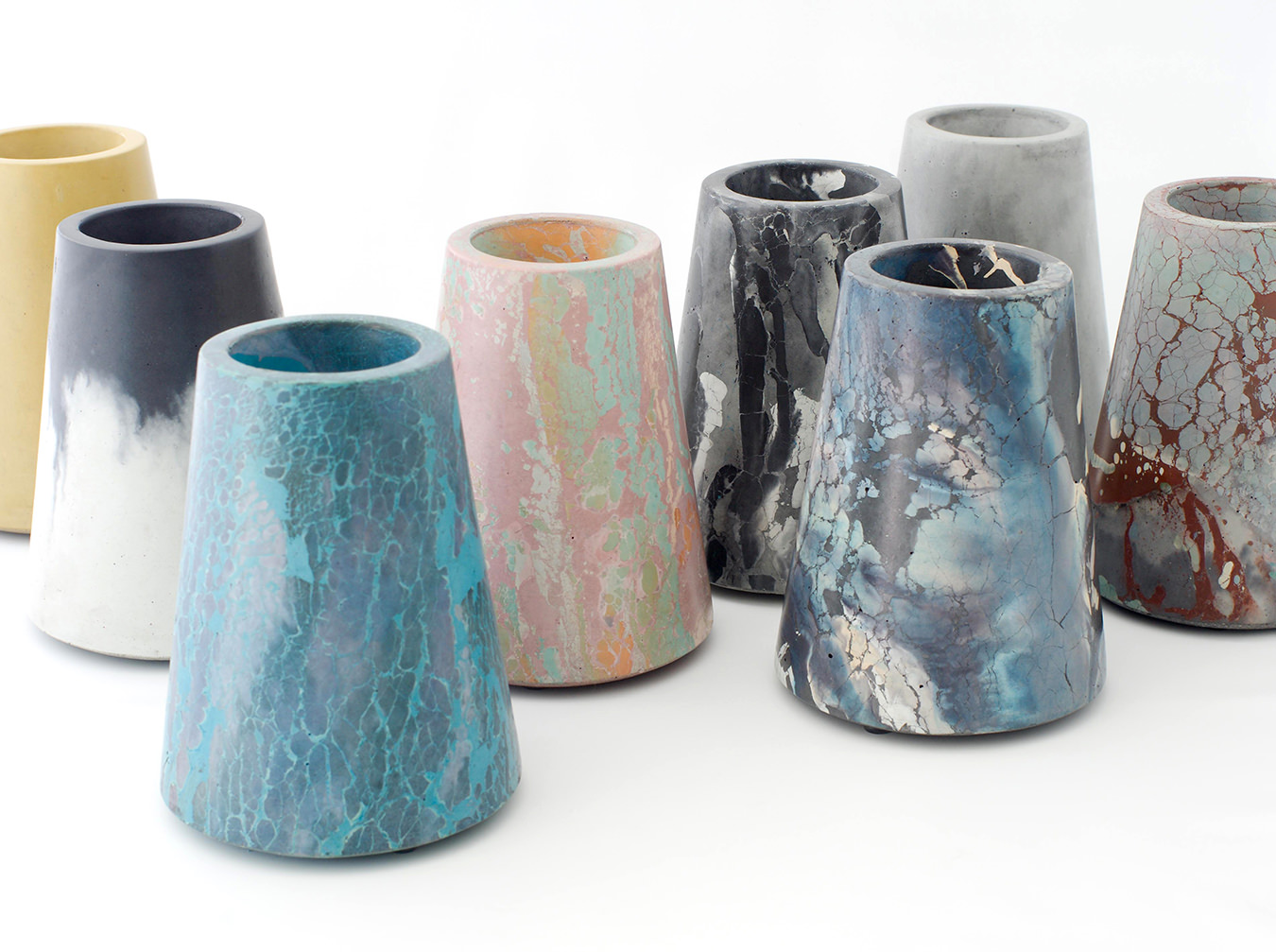 Heide’s overarching intent is for Concrete Cat designs to adhere to Vitruvian principles of beauty, utility, and robustness. He respects ancient Greek and Roman civilizations, citing Rome’s oldest buildings, which are made of concrete, as inspiration. “My areas of focus in university were Greek and Roman classics, sci-fi and fantasy literature, and literary theory,” he says. “I like to think of our work as having a sci-fi and fantasy element to it that’s inspired by classical Greek culture.” Not that he overthinks it. Concrete Cat has been known to cast whimsical objects in concrete as well—doughnuts, cameras, and baseball bats.

Heide admits the colour-concrete aesthetic has yet to fully catch on in Canada. Concrete Cat has, however, created architectural elements and retail displays for clients in the United States and has crafted rooftop café tabletops for Dior’s Seoul boutique, which was designed by Christian de Portzamparc with interiors by Peter Marino—a powerful testament to the studio’s burgeoning design-world clout. Indeed, it seems the road ahead for Concrete Cat is brightly paved.