In the early fall of 1974, Wade Davis, then 20, found himself lost and waist-deep in the swampland of Panama’s infamous Darien Gap, a jungly hellhole where explorers, on occasion, disappear. Davis was lost because his three Kuna guides were themselves lost. Which meant that Davis’s task of helping British adventurer Sebastian Snow cross the roadless, unmapped Gap on Snow’s intended 24,000-kilometre walk from Argentina’s Tierra del Fuego to northernmost Alaska was in jeopardy. It didn’t help that the men had gone without food for a week, nor that Davis had never been to that section of the Darien Gap before, nor that Snow was going insane. After Davis stumbled upon a remote construction site where workers were attempting to close the final section in the Pan-American Highway, and after his companions had deposited part of their breakfasts on him during a stormy Cessna flight, Davis stepped out of the airplane and thought, “I’ve never felt more alive!” 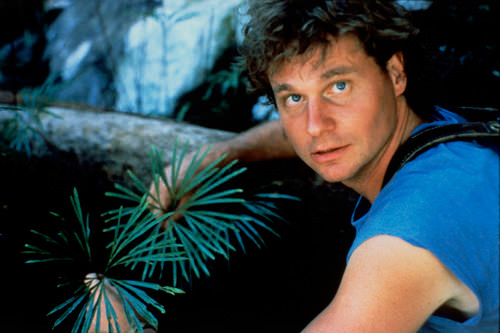 Wade Davis in the homeland of the Penan, Ubong River in Sarawak, Malaysia, 1989. Photo by Jeff Gibbs.

In the 40 years since that initial encounter with calamity, Davis—an ethnobotanist, ethnographer, writer, photographer, filmmaker, anthropologist, and author—has acquired a resumé that reads like the achievements of a dozen great adventurers. His years immersed in the ethnobotany of Haiti’s voodoo culture, for example, led to The Serpent and the Rainbow, a bestselling account of the island’s zombies—as a result of ingesting a Haitian fish-based, fugu-like drug, people become paralyzed and buried with their heartbeat virtually gone, before waking and reappearing. And his years among Amazon tribes led to his writing One River, a story about some of the world’s least known tribal people. He has been on expeditions to document the Penan hunter-gatherers of jungle Borneo, the clouded leopards of Tibet, the nomadic Tuareg of the Sahara, and the Inuit narwhal hunters of Baffin Island, to name just a few of his journeys to the Earth’s frontiers. And during his recently ended 14-year assignment as explorer-in-residence at National Geographic, Davis produced dozens of articles and numerous books, documentary films, and lectures reflecting his concern for the planet’s endangered cultures—and, by extension, his concern for the endangered planet itself.

Davis taught himself to write and garnered inspiration from many masters. He cites Gary Snyder and Peter Matthiessen as role models. He found in novelist Lawrence Durrell’s The Alexandria Quartet an aperture into narrative storytelling. From Ernest Hemingway he learned clarity and dialogue. From poet Walt Whitman, he found a peripatetic mentor; Davis carried Leaves of Grass with him on scientific expeditions around the world. So besides writing scores of astringent scientific papers, Davis also wrote popular accounts of his journeys through the ethnosphere: Shadows in the Sun, One River, Light at the Edge of the World, and The Wayfinders are just some of the 17 books he has written. Combined, they’ve sold almost one million copies. 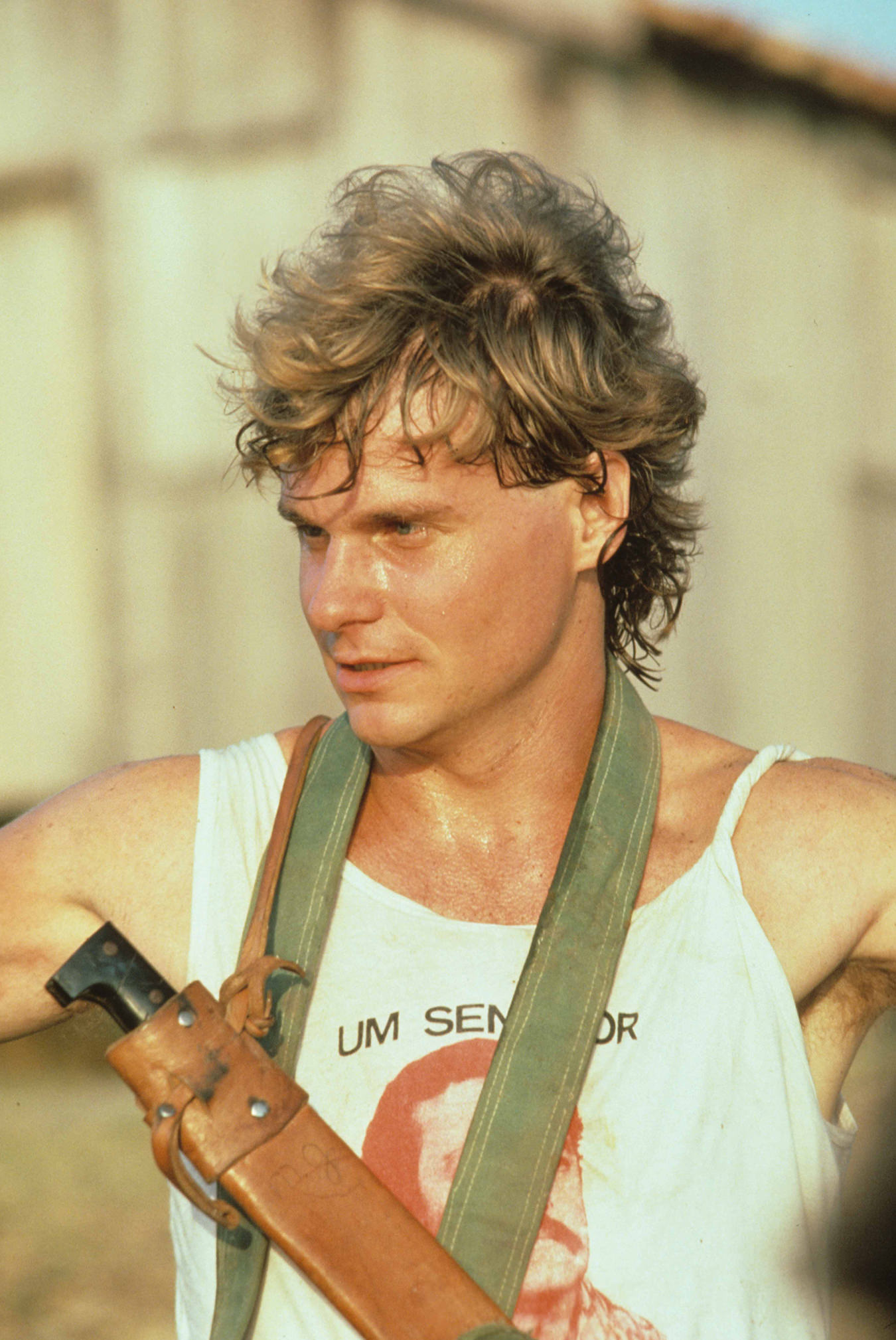 Wade Davis in the Brazilian Amazon, 1983. Photo by Monique Giausseran.

Now back in British Columbia, sitting at home in West Vancouver, bare feet up, his wife, Gail Percy, practising classical guitar upstairs, Davis (father to two grown daughters) explains how a kid from a middle-class family—his father was an investment adviser and his mother was the secretary to an elementary school principal—became one of the world’s leading explorers. His return to Canada is the result of his recent appointment as a professor of anthropology at the University of British Columbia, where he’ll teach two courses this fall on world cultures and act as a “public anthropologist”, using his academic platform to call for, as he says, “a total paradigm shift in the fundamental ways people interact with the Earth.”

The vertiginous route that Davis’s life has taken during the past 60 years gave impetus to his risk-taking nature. There was, to use Davis’s phrase, a sort of Lord of the Flies private school where bullying was common and playing rugby was a defence against accusations of weakness. “I learned hard was great,” he says of those adolescent years. “And quitting not an option.” There was also, at age 14, a summer as an exchange student in the tiny Colombian village of Dappa, where to prove his fearlessness, he accepted the challenge of a machismo-fuelled kid to hold a lit cigarette wedged between their outstretched forearms to see which one would flinch first. “I thought, jeez, this hurts!” says Davis, laughing. “But I’d have let the ember burn through to China before I’d have pulled my arm away.” He still has the still-visible scar on his right arm.

Of those formative months as a teenager on his own in South America, he says, “Life was real, visceral, dense, with intoxicating possibilities. I learned to have one operative word in my vocabulary, and that was yes—to any experience, anything new.” From this came Harvard University—where LSD opened his eyes to alternate realities (contrary to general public fears, Davis is happy to acknowledge this) and where, at age 33, he got his PhD. During these youthful years of education and Latin American field research occurred the Darien Gap adventure, the zombies of Haiti, and work as an itinerant ethnobotanist amid the peoples of the Upper Amazon and the high Andes. There, he studied the botanical knowledge of the natives and, on occasion, partook of one of the world’s most powerful psychoactive drugs: ayahuasca. (Of another psychoactive drug, a snuff called ebene, Davis says: “To have that powder blown up your nose is rather like being shot out of a rifle barrel lined with baroque paintings and landing on a sea of electricity.”)

“The culture of modernity is just another ideology. We presume we have a monopoly on the future. We do not. There’s this belief in the West that all people want to be like us. They do not.”

In the decades when Davis was exploring South American forests collecting data on plants, he came to understand that recording the pharmacology of Peru’s San Pedro cactus cult, for example, or the health and healing practices of the Waorani people, is of little value if the San Pedro cactus-eaters or Waorani tribes were themselves to disappear. And that’s exactly what was happening. Huge tracts of Brazilian forest were being clear-cut for cattle ranches. Dams were proposed. Missionaries came and made conversions. Seismic lines were blasted through jungles in pursuit of oil. “I realized,” he says, “that botany was, to me, simply a conduit to culture. I couldn’t just focus on the erosion of the Earth’s biological diversity and ignore the threat to human cultures. I came to see that under the ubiquitous pressure of modernity, there’s a fire burning across the Earth. And it’s destroying ancient knowledge—entire languages, entire mythologies, and the visionary wisdom of generations.”

This insight changed Davis’s life. “The social world we live in doesn’t exist in some absolute sense, but is just one model of reality,” Davis has written, in The Wayfinders, and often notes in his talks. Put another way: different beliefs create different realities. Through his and his academic associates’ experiences with reality-warping drugs and through decades among people whose reality was utterly different than his, Davis came to grasp the urgency of his future role. There were people—he had seen them—who could put hot coals in their mouths and not suffer. There were people who became zombies. There were people who treated the Earth as a sacred goddess and believed the cosmos was dreamt into existence. “That was a window,” he says, “that opened to the poetics of culture. I saw that the world’s endangered cultures embodied the possibilities of the future.”

He had to do something. A crisis was at hand. He had to protect—using his own invented word for humanity’s collective culture—the ethnosphere. 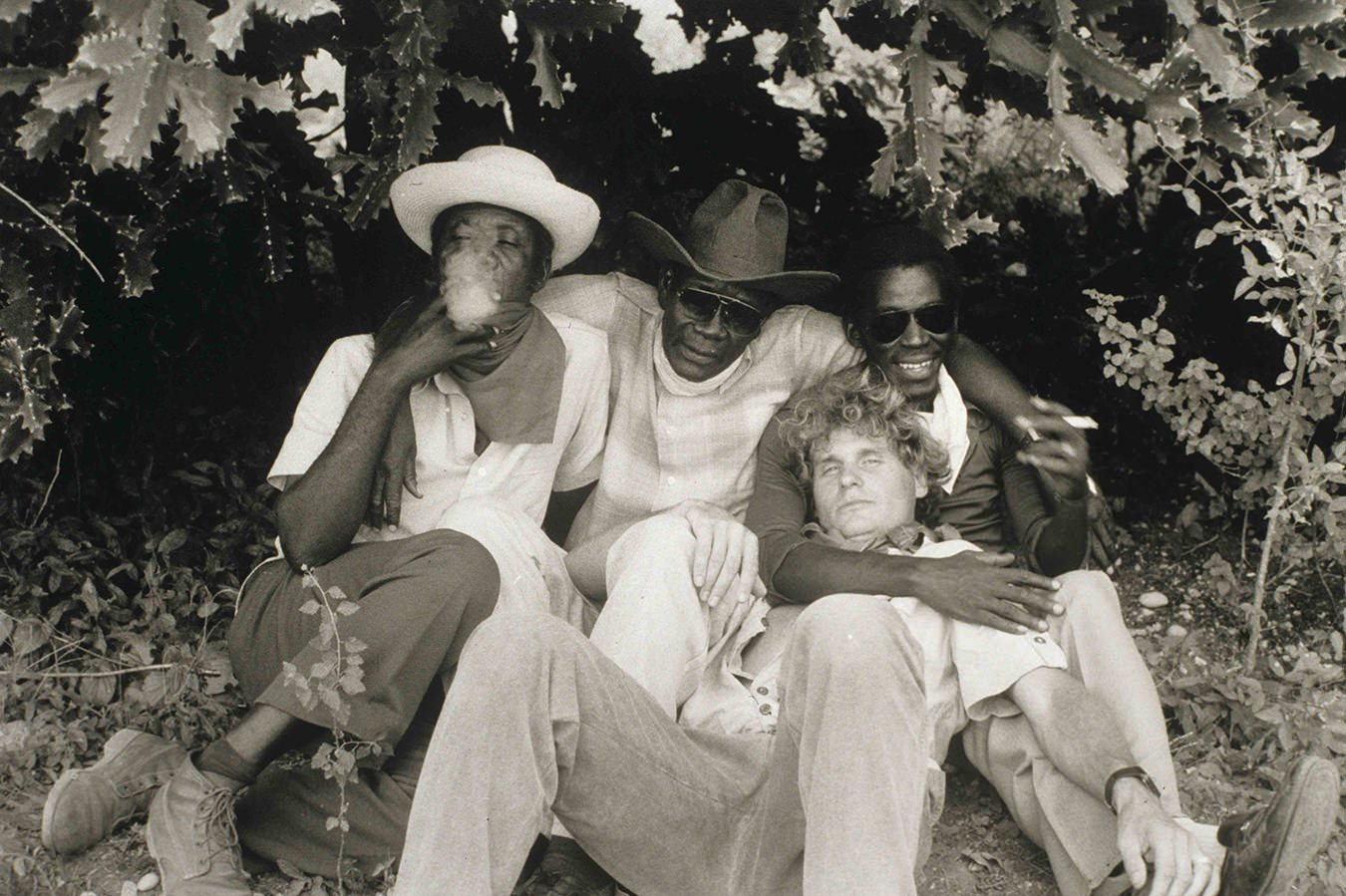 During his lifetime, Davis explains, half of the Earth’s languages have gone extinct: a decline from about 14,000 in 1953 to approximately 7,000 today. And many of the languages that remain are spoken by just a few hundred people. At the current rate of decline, with the death of each culture’s last speaker, 25 unique languages die on average each year. (By 2100, it’s predicted that between 50 and 90 per cent of the planet’s current living languages will disappear.) Lost along with these languages are principles of ecological balance, medicinal wisdom, and attitudes toward sharing and belonging and what it means to be human. For example, between the time in 1988 that Davis first visited the Penan of remotest Southeast Asia and the present, the remaining 100 members of the Earth’s last hunter-gatherer tribe, under the pressure of logging and palm oil plantations, were forced by authorities to abandon their ancient nomadic ways and settle in depressingly squalid villages. In another generation, the Penan will almost certainly be gone. Among dozens of tribes in Brazil and Papua New Guinea, among the Inuit of Canada’s high arctic, among the seafaring peoples of the Marquesas Islands, there are, Davis understands, stories that need to be told before the significance contained in these stories are lost forever.

Having defined and become the intellectual point man for the planet’s endangered cultures, Davis was invited in 1999 to join an elite group of seven famous field scientists and adventurers—including primatologist Jane Goodall and Titanic finder Robert Ballard—as an explorer-in-residence at National Geographic. It is a job title almost unparalleled on Earth. In the years that followed, Davis visited some 60 countries, producing stories and feature documentary films about Mongolia and Mali, Peru and Polynesia, Niger and Nepal, and scores of remote places in between. And now, Davis is returning to the place where his story began. 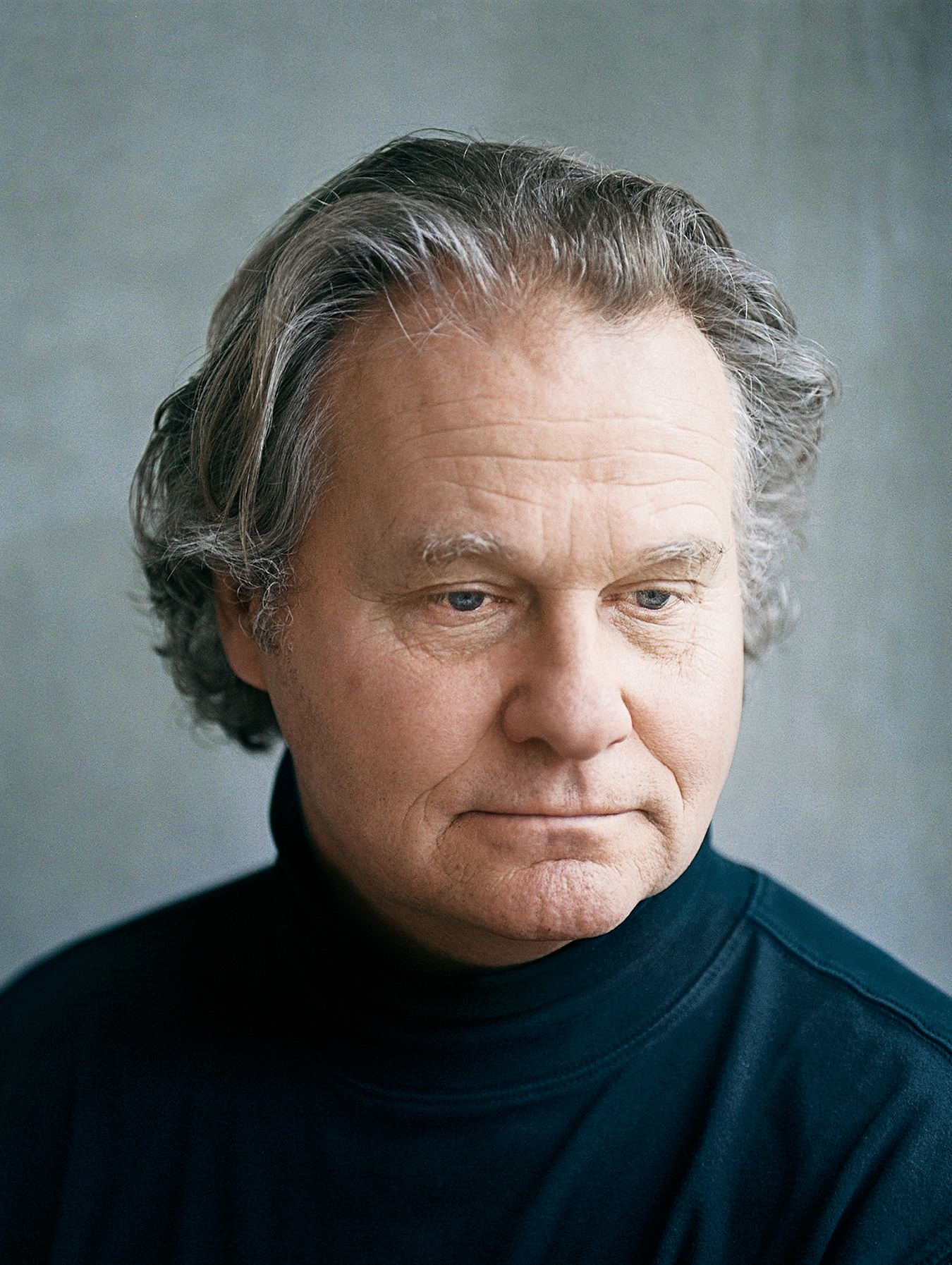 In 1999, Wade Davis was invited to join an elite group of seven famous field scientists and adventurers as an explorer-in-residence at National Geographic. It is a job title almost unparalleled on Earth.

The goal of teaching at UBC, he explains, is to catch impressionable students who have not become too indoctrinated by narrow scholastic life. He wants them to understand the importance of adventure, uncertainty, mythology, and cultural relativism because ancient wisdom matters—and that, to repeat his words, “stories can change the world.” In fact, he adds, stories may be the very thing that saves us from ourselves. “We presume modernity is an inexorable force of history,” he says. “It’s not. The culture of modernity is just another ideology. We presume we have a monopoly on the future. We do not. There’s this belief in the West that all people want to be like us. They do not. More importantly, they cannot. If we continue to project this belief onto the world’s population, we’d need four more planets to sustain human life.”

His goal in his new position is to argue against the consumerism and anxiety that now dominate modern life. “We’re caught in the politics of hysteria,” Davis says. “But there are other options, other possibilities, other ways of thinking and interacting with the Earth. The antidote for cynicism is pushing the Wheel of Life, and seeing all the positive things the world offers. We all have to put our shoulders to it. It’s this idea that has always filled me with hope.”