Todd Saunders has made his mark by turning the middle of nowhere into somewhere. His architecture—bare, sculptural, conductive—amplifies place like a microphone set in the landscape, making both built space and the place it’s in palpably present. Designed by Saunders, the Fogo Island Inn opened last summer on a beautiful Newfoundland island, with five stars, Bruce Mau graphics, a restaurant run by chef Murray McDonald, and 29 rooms overlooking the wild North Atlantic. Along with four art studios he created nearby (there are plans to build two more), it is part of an ambitious scheme involving design, craft, and art, to reinvent the local economy while preserving the culture around it.

Fogo represents a homecoming for Saunders, who was born in Gander, Newfoundland, an hour-and-a-half drive plus 45-minute ferry ride away. In 1996, he settled in another northern town, Bergen, Norway, where he established a studio (and later a family), now cluttered with models and wallpapered with renderings. At the age of 44, Saunders has become one of the most talented Canadian architects working abroad. 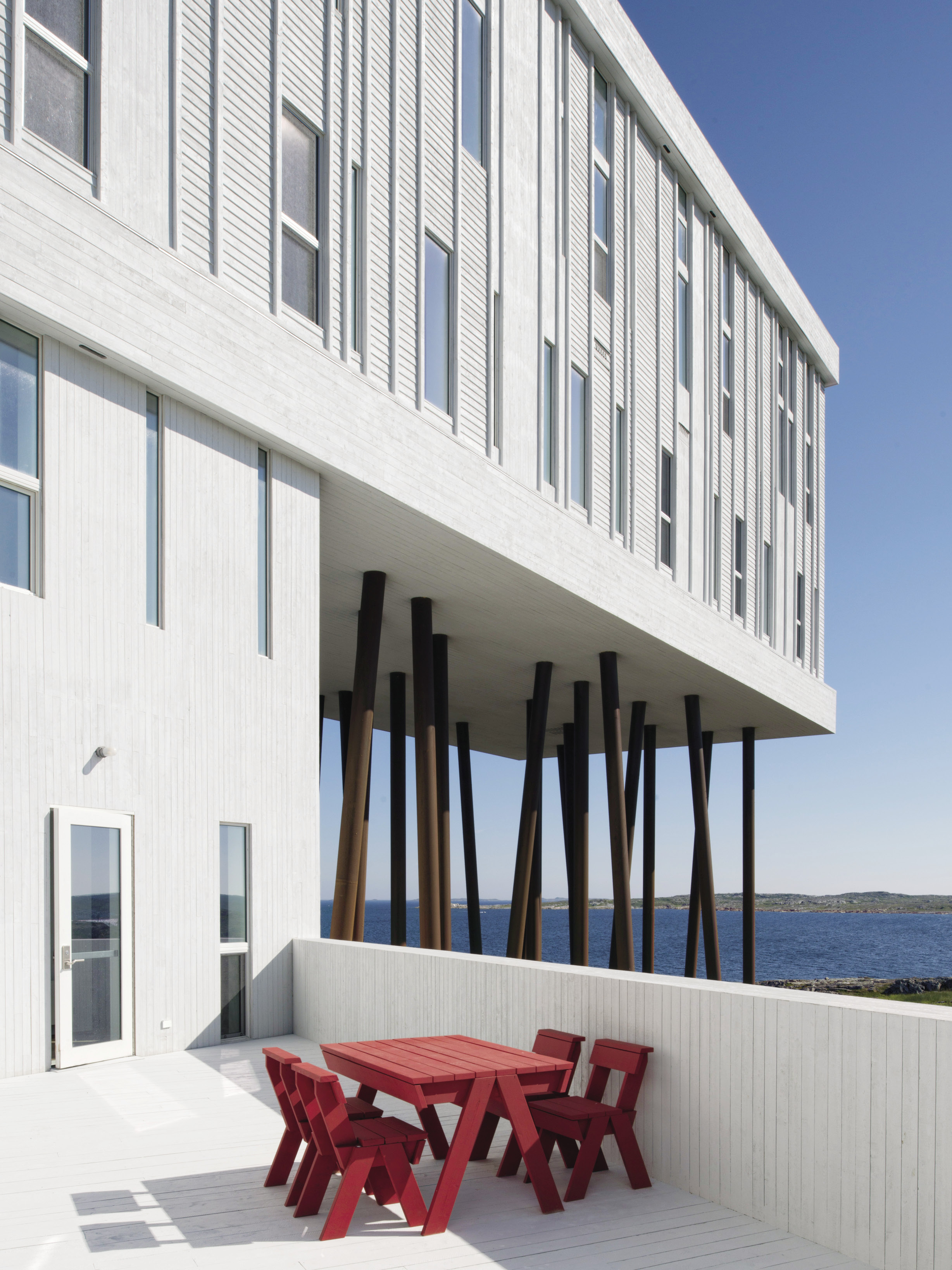 In Norway, the glaciers, waterfalls, fjords, and avalanches result in an architecture that, instead of beating its chest in the face of nature, is modest and spare. Saunders brought this sensibility with him on his return to Fogo; his studios there are anchored lightly into the craggy littoral and perched on pilotis, an old outport building tradition.

Saunders pares forms down based on ideas that sound modest, but are later writ large and graphical. “With the white studio [the Squish Studio], I wanted something like a comma in the landscape,” he says. “The Bridge Studio was about making something very shy, very quiet.” On leggy, tilting stilts, the inn looks like a fishing stage (and is no-holds-barred sustainable). Saunders hadn’t worked at this scale before. “I told myself that it was just a big house with 29 bedrooms and a bit bigger kitchen,” he admits, which incidentally, gave the inn the deep sense of comfort that the landscape withholds. Then the Shorefast Foundation—a charity committed to developing economic and cultural resilience for Fogo Island—mediated a collaboration among Saunders, international designers, and local craftspeople and boat builders to create the furnishings: local carpenters made the beds and Ineke Hans rocking chairs, and local craftswomen sewed the colourful quilts.

Saunders’s work points to people as well as to place, and to place as powerfully as to architecture. This virtue was evident a decade ago when, with Tommie Wilhelmsen, he designed the Aurland Lookout, which peels off the lip of a Norwegian cliff. At the end of the platform, only a single sheet of glass, canted outward, separates visitors from 640 metres of air. “You have to learn to lean forward and let go of yourself,” Saunders says. “The architecture doesn’t protect you anymore—you become a part of the landscape.”