It’s another beautiful day at Broadfield, the 2,300-hectare sporting club at Sea Island resort in the south of Georgia, and Chris Kennedy, a master falconer there, is eyeing the trees. They’re live oaks dripping with Spanish moss, and they form a forest that’s cut by a narrow path—the path Kennedy walks along. Kennedy, a 28-year-old, is pensive. “Falconry,” he says, “is all about patience.” He pauses after a couple of steps to listen for the telltale dull tinker of the tracking bell that’s strapped to the leg of Doyle, a 14-year-old male Harris hawk and one of the six birds he uses to hunt on the estate.

After gazing a while with a far-off look—“Ah,” he says, “there he is.” I can’t hear anything other than the gentle rustle of leaves, but Kennedy has been listening for subtle sounds like these since he was 14, when he got his first bird, a red-tailed hawk. “My father grew up falconing,” he says, “and I grew up with it, too.” 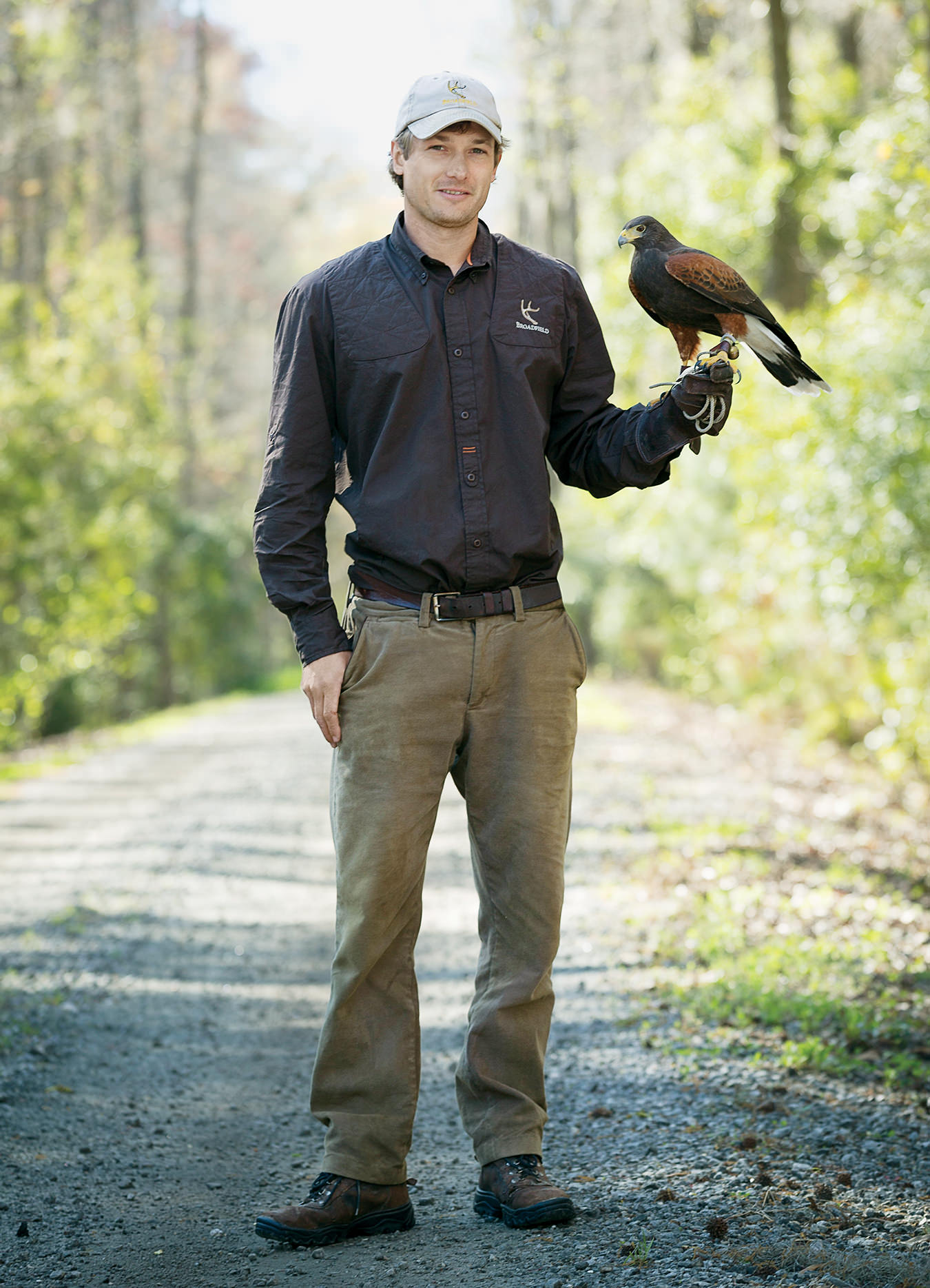 We watch as Doyle wonkily flies from his perch high up in an oak tree to another hundred or so metres away. Hawks soar gracefully but flap silly-like. Soon, though, Doyle is perched again, and we continue to walk, hoping to scuff up a squirrel or a rabbit. “Patience,” repeats Kennedy.

Kennedy is one of the few full-time falconers in the United States. (At Sea Island guests can accompany Kennedy on a hunt.) Falconry, one of the oldest forms of hunting in the world, isn’t dying out, but it’s not exactly flourishing either. From Mongols in 4000 BC to medieval English lords to Russian czars (back when they had them), the technology of falconry—man, bird, prey—is rudimentary and unchanged. But you’re much more likely to happen across a man in silly expensive camouflage with a Beretta across his lap and chew in his mouth than you are a falconer.

Hunting with a bow and arrow, a rifle, or a fishing rod pits man and his mechanical weapon versus his quarry, an animal of some sort. But in falconry, man works in tandem with an animal to hunt another one. Hunting with a bird versus a gun is like riding a horse instead of driving a car. One trades the mechanical for the sentient. “It’s just you and this wild thing that you caught and trained,” explains Kennedy. “It’s not easy. There’s a lot of moving parts.”

A few months working as an intern at his father’s consulting firm in Atlanta convinced Kennedy that cubicle life was not for him. “I would fill out spreadsheets and think of a way to escape,” he says. At the University of Georgia, Kennedy began as a biology major but quickly switched to business—which seems counterintuitive, but as Kennedy admits, “It was mostly so I could escape into the woods more often.”

However, upon graduation, it was the bush that first got his attention. Shortly after finishing his degree, Kennedy packed his bags and headed to Tanzania, where for three years he coursed bone-rattling roads, setting up luxurious camps for safaris. Eventually, he got a licence to lead Cape buffalo hunts. (“Buffalo are a dangerous thing to hunt,” he says. “They’ll turn and come after people. It’s pretty intense.”)

When he returned to America in 2011, he returned to his birds too. At Broadfield and at his home a few kilometres away, where he has built a mew (as the cages are called), Kennedy looks after two peregrine falcons, two Harris hawks, a goshawk, and a saker falcon. Each bird has its own métier. Falcons, which soar and hunt from the air, are bad news for pheasants and partridges. Harris hawks, like Doyle, are lights out for squirrels and rabbits. Goshawks kill quail and have a wide prey range. Though he trains them, Kennedy says, “They’re still wild birds. They’re hunting because they want to hunt. My job is to make sure they want to.”

To do that, Kennedy relies on a small digital scale with an Astroturf perch. He knows the weight of the birds down to the gram. (Doyle, for instance, weighs 700 grams. When he’s hungry, he weighs 650 grams, and when he’s full, 750 grams.) Kennedy rattles off the grams and their ranges for all his birds. This is, after all, his ammunition. “If they’re not hungry, they won’t hunt.”

Falconry, as Kennedy explains, isn’t about modifying or domesticating a bird’s behaviour as much as it is convincing the bird that his goals and yours are aligned. “The bird has to believe that he’ll have an easier time getting food by hanging around me than not.”

To that end, Kennedy carries a pouch full of raw quail meat. With a staccato whistle, Kennedy summons Doyle from the trees to his gloved hand. The bird’s eyes stare at Kennedy unblinkingly, expectantly, as the bird’s talons, which can crush a squirrel to death, rest gently on the leather.

With his other hand, Kennedy reaches into his satchel and feeds the bird a sliver of raw meat. If Doyle’s eyes were to fasten upon a rabbit darting or a squirrel fleeing, he would tumble headlong toward it, weaving between trees and cracking boughs, reckless and tenaciously aggressive in his pursuit. But when he reaches his quarry and takes it, as hawks do, to the ground, Kennedy will slowly approach, swiftly swap out the dead squirrel for a prepared cut of meat, and walk away.

As it happens, Doyle doesn’t find what he’s looking for, but that seems just fine with Kennedy. He summons Doyle back to his hand and strolls again through the trees. “Well, maybe next time,” he says.