Blue. The colour suggests vacation: bright, sunny blue skies and rippling blue waters. There are endless hues within the blue spectrum—baby, electric, midnight—yet the purest of all blues is crystal. Likewise, there are endless cruise lines, but for the most genuine and luxurious experience, the one that tops the list is Crystal.

Winner of accolades and too many hospitality industry awards to count, Crystal Cruises offers a taste of the grandeur of the past, along with all the modern amenities discerning passengers expect. What makes Crystal distinctive is their exceptional service, variety of dining options, luxurious accommodations, comprehensive shore excursions, and they have some of the highest ratios of space per passenger of any cruise ship. Crystal ships—there are two in the fleet: Crystal Symphony and Crystal Serenity—are large, yet they carry upward of only 1,000 passengers. From the ship’s design, which is based on the principles of feng shui, to their “Your wish. Our command” motto, no detail is overlooked. 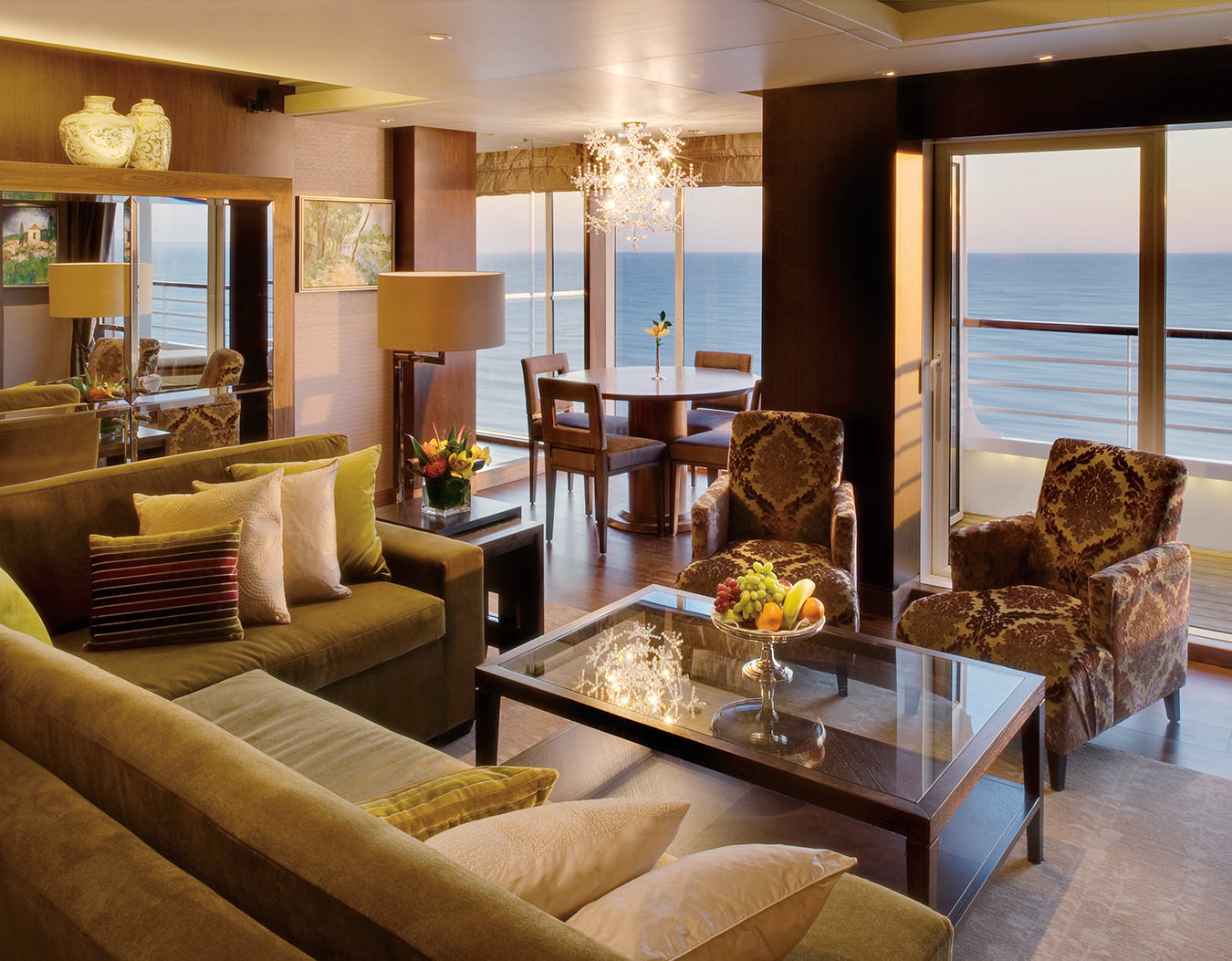 Travel piques our sense of wonder, satisfies our curiosities, and instills an appreciation for the diverse cultures and landscapes of each destination visited. Sailing the seas with Crystal brings an ocean of opportunities, from Antarctic expeditions to African safaris. No matter where in the world you sail—and no matter how long your voyage, from 10 to 110 days—the experience is unsurpassed. For my adventure, I set sail on the Crystal Serenity for the Mediterranean Treasures cruise, visiting eight ports of call.

The embarkation procedure is painless, and a photographer records each arrival. I’m escorted to my stateroom, and as I take in my surroundings, a discreet knock on the door announces the appearance of a butler—wearing tails and white gloves. Throughout the voyage, no matter the hour or the stress he may be experiencing, my butler is never less than faultlessly turned out. He introduces me to my home for the next 12 days: a 403-square-foot penthouse with a verandah, a seating area, beautifully varnished wood furnishings including a vanity and great working desk, a walk-in closet, and a marble bathroom with dual vanities, a spacious shower, and a Jacuzzi bath. And if I do not take him up on his offer to press my clothes, there is a fully equipped laundry service down the hall.

Sailing into the Bay of Naples on a clear day will give your heart a flutter. The mighty Mount Vesuvius, perpetrator of one of the world’s most infamous cataclysms, rises from the morning mist like a sentinel. In the long shadow of the mountain stands the once-grand Pompeii, now a silent stone tribute to those who saw fire and ash rain down upon them 1,932 years ago. The rugged Isle of Capri juts from the bay’s waters, and nearby are the town of Sorrento and the Amalfi Drive, the road around what is reputed to be one of the world’s most spectacular coastlines.

My butler takes my preferences for stocking the in-room bar, notes my requests for certain foods and specialty drinks, and has them available upon request. He informs me of all my dining options onboard and recommends I make a reservation at Silk Road, chef Nobuyuki “Nobu” Matsuhisa’s restaurant that serves up inventive Japanese cuisine. 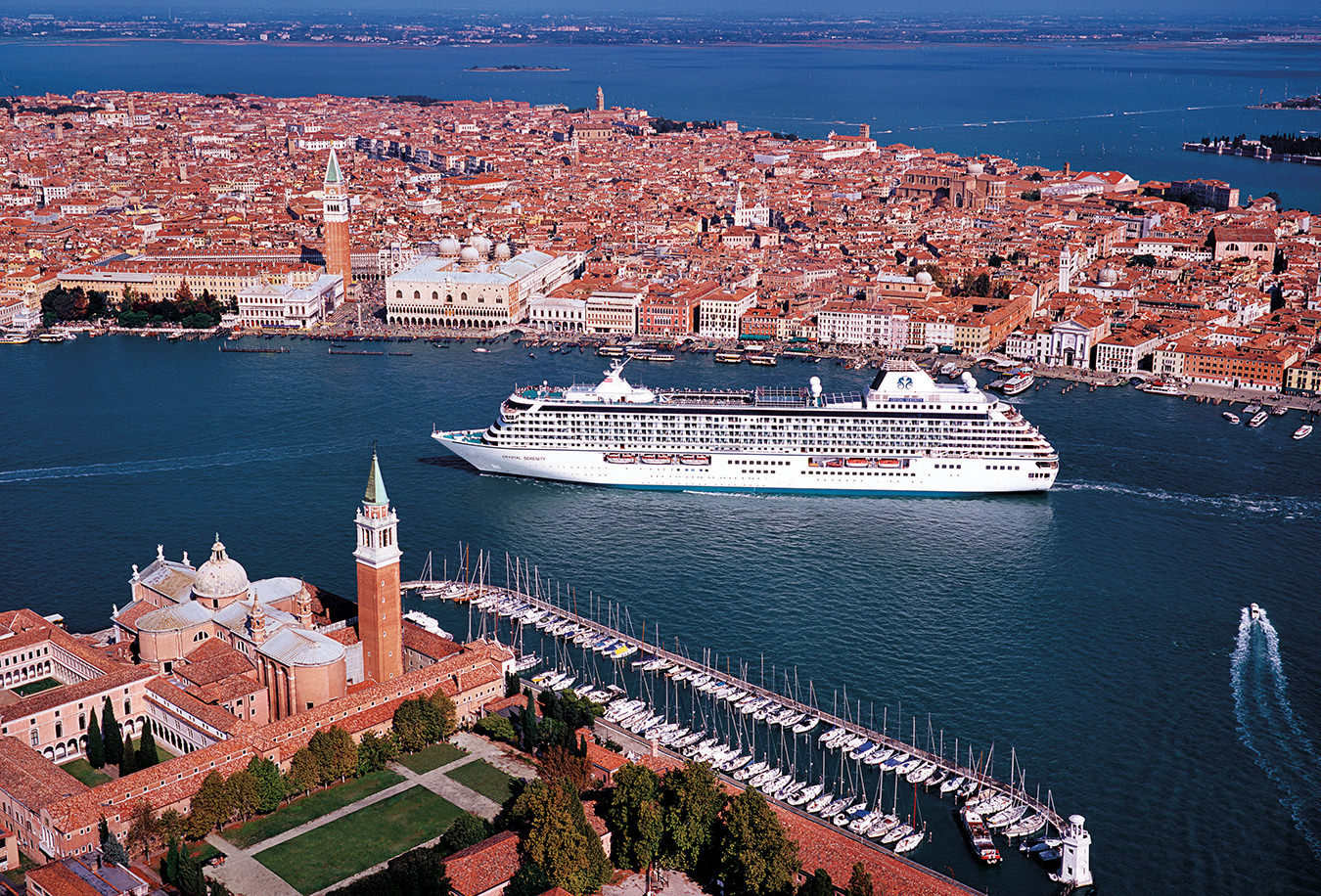 There is a long list of admirers of Sicily who have made their way to its sunny shores. The earliest waves of ragged visitors boated from Italy’s boot across the 3-kilometre patch of the Strait of Messina, children and meager possessions in tow; that was in approximately 20,000 BC, or so scholars claim. Waves of invaders followed. Many were eager to protect their lucrative sea routes. Others wished to expand their empires. Some simply fled from conflicts farther north. Mount Etna, Europe’s highest volcano, often served as a lookout for these lost souls. But that was long ago and today a different agenda awaits. I visit for the comforts, for the history, and to sample the Sicilian wines and the artisanal cannoli Siciliani.

The Crystal Serenity can take 1,070 guests, and a crew of 655 from more than 40 countries attends to their every whim. For an unprecedented 17 years, Crystal Cruises has been voted World’s Best by Condé Nast Traveler readers. Driven by a passion for excellence, Crystal Cruises has an unwavering desire to create vacations that enrich and engage, revealing the world’s grand monuments, intimate details, and natural wonders.

This tiny island is one of the most popular destinations in the Mediterranean, and it has always attracted the attention of maritime powers. As a result, Malta possesses a wealth of history that is out of proportion with its diminutive size. A swirl of activity centres around Valletta, the picturesque port city on the island where the impressive St. John’s Co-Cathedral is located—a visual splendour of baroque art and architecture. Nearly 13 kilometres from Valletta is Mdina, a historic citadel built on a 213-metre-high outcropping that affords a marvellous view of the surrounding countryside. Known as the Silent City, Mdina is rather mysterious, with narrow passageways and cobblestone lanes.

It’s a good idea to reserve early if you want spa and salon services during a cruise. The spa menu runs the gamut, ensuring ultimate relaxation while onboard.

There is a blueness to the Tunisian sky one rarely sees elsewhere, save for the studded doors of Sidi Bou Said or the filigree birdcages hanging on the white-washed walls of Gammarth. The blue isn’t aqua per se, or turquoise, or sky. Perhaps the gods coveted this one hue, and all at once decided to splash it on Tunisia’s window frames and wash it across the waves. Wedged between Libya and Algeria, Tunisia is closer to Sicily, Malta, and Sardinia than to most of the African continent. And her culture is more akin to her neighbours than to the nations of Sub-Saharan Africa. But she is African.

The vast scale of the Crystal Serenity’s food and beverage operation, with a staff of 200 (85 professional chefs and 115 kitchen staff), realizes executive chef Franz Weiss’s determination to maintain top quality. Weiss’s ingredients include foods from around the world: Sevruga caviar; cheeses from France, Italy, and Denmark; fresh crab from Alaska; live lobster from Maine; fresh produce from California and Florida. On a typical 10-day cruise, the shopping list includes over 60 tons of foodstuffs. The amount of coffee consumed each day: 379 litres. The daily number of eggs used: 2,300. The usual quantity of bread rolls made per day: 2,500. 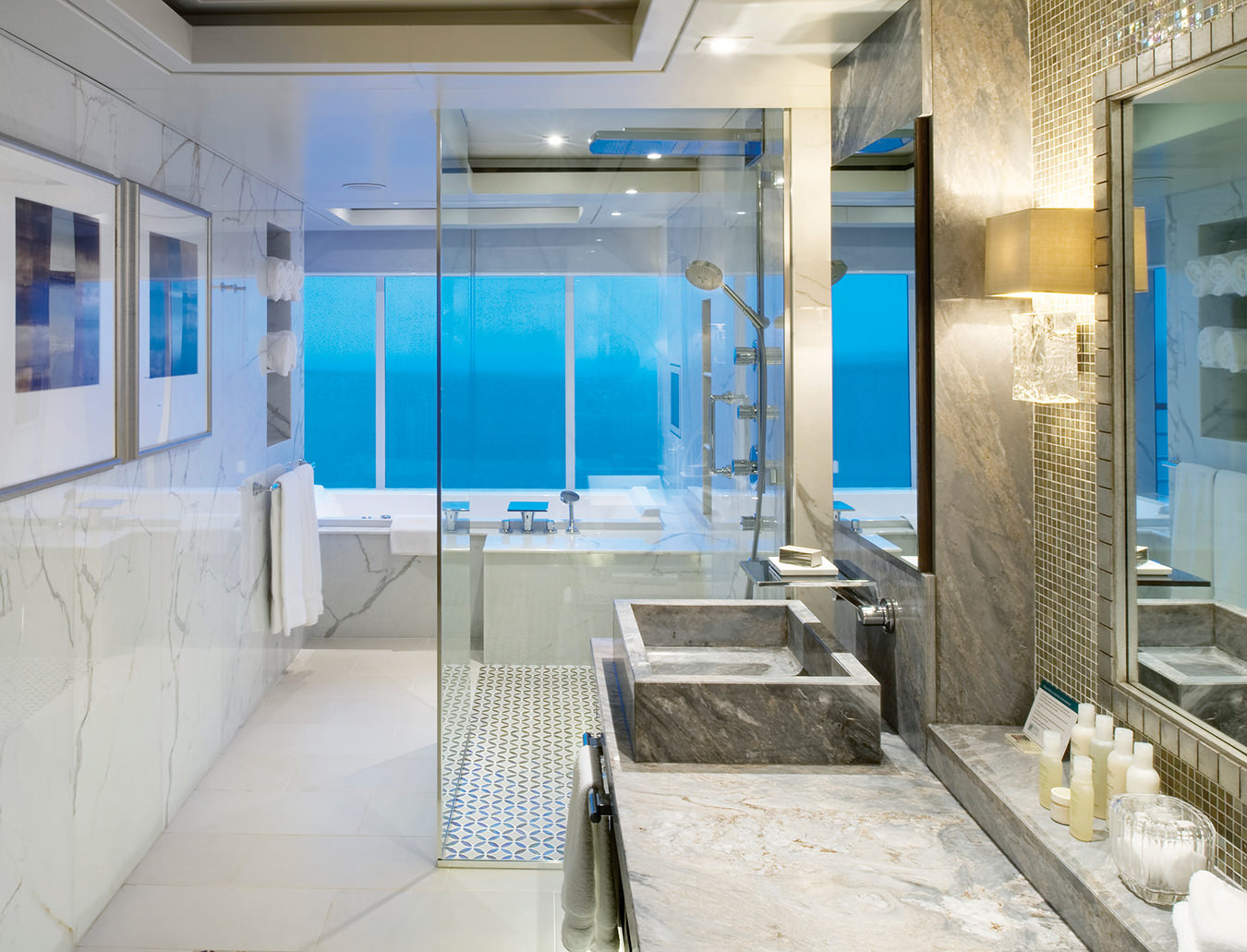 Pablo Ruiz Picasso, arguably the most famous son of the city, was born in Málaga at 36 Plaza de la Merced (now number 15). Málaga is part of the sunny Costa del Sol, a 386-kilometre stretch of bays and beaches, cliff-hanging towns, whitewashed villages, red-tiled roofs, and vibrant bougainvillea. The city provides the backdrop for vacationers eager to bronze their bodies, resulting in a high-season population that visits to enjoy all the seaside pleasures.

This city isn’t as famous as other resort cities in Andalusia, but it’s been dear to the hearts of people throughout the ages, including the Phoenicians, Carthaginians, Romans, Arabs, Christians, and Northern European snowbirds. Almería is considered to be Andalusia’s most “African” city on the sea. All this becomes palpable when wandering through the looming Arab fortress, Alcazaba. History buffs will want to visit the ruins of Tabernas Castle where Ferdinand and Isabella sought refuge in the hills during the siege.

There is something for just about everyone aboard the Crystal Serenity: two pools, golf-driving nets and a putting green, shuffleboard courts, tennis courts, a 360-degree promenade deck, and an impeccably equipped fitness centre where you can work off the calories and any guilt you are foolish enough to have.

Aragon, El Cid Campeador, the Holy Grail, the Crusades, paella, the America’s Cup; a mélange of history and culture. Foreign conquerors have come and gone, leaving behind the rich tapestry that defines Valencia as a consummately Spanish city.

Crystal Cruises offers a cornucopia of entertainment possibilities including piano bars, karaoke nights, a movie theatre, a casino partnership with Caesars Palace, and Broadway-style production shows. But where Crystal really shines is in their variety of enrichment and educational programs. Passengers can take courses with the Computer University@Sea, and take in Creative Learning Institute classes, or attend lectures featuring top experts in their fields. There are keyboard lessons with Yamaha and language classes by Berlitz; professional ACBL Bridge instructors are on every cruise, and dance instructors offer lessons in contemporary and social dance styles. The Crystal Visions Enrichment Program remains the industry benchmark, showcasing some of the world’s most celebrated names in art and history, journalism and television, stage and screen, U.S. and foreign diplomacy, and more.

If you pronounce the name of this magnificent city Bar-seh-LOE-nuh, the local people will certainly know you’re not Catalan. In Catalan, which Barcelonans speak, the correct pronunciation is Bar-ssuh-LOE-nuh, spoken as if with a hiss. As you approach Barcelona by boat, the bustling harbour is alive with cruise ships, brightly painted fishing boats pulling their daily catch from the transparent ink-blue waters, and sleek white pleasure crafts awash with deck hands who polish the brass chandlery to a shimmering glow. The tree-lined path that runs from the waterfront all the way up to Plaça de Catalunya is the suitable-for-strolling Las Ramblas. Flower stalls with their brilliant bouquets, bird vendors with cages of canaries and doves, benches lined with gossiping women and dozing leather-faced men all decorate this promenade like a painter’s canvas. Life, it seems, changes very little on Las Ramblas.

Antoni Gaudí, a turn-of-the-century architect with a fancy for fantasy, was a lighthearted visionary of art noveau. Gaudí lived for 73 years before being struck down by a tram in front of his most ambitious and famous work, La Sagrada Familia. Still under construction, the church resembles a giant sandcastle made by dripping sand through clenched fists, drip by colourful drip, until it reached the sky. Then it was dusted with magical speckles of colour to create a kaleidoscope of towers, buttresses, gargoyles, and serpentine arches. Barcelona is such a magnificent city, you’ll be tempted to fling your passport into the Balearic.

Leaving the ship, I feel that taking a luxury hotel with me is the ideal way to explore numerous choice destinations—and the trips can serve as reconnaissance missions for places where I might want to spend a lot more time. No matter where in the world you sail, the onboard experience with Crystal Cruises transcends the standards of travel and elevates cruising to an art form. The Photography of Ruth Orkin