After more than 35 years in Manhattan’s interior design business, world-renowned designer Vicente Wolf is at the top of his game. But don’t expect champagne popping or an inflated sense of entitlement when it comes to discussing his own career—this is a man with a sense of humility, and humour, who seems to have a grip on reality.

“I love pub­­­lic speaking,” says Cuban-born Wolf after speaking and signing books in Vancouver at Buildex, one of Canada’s largest commercial design trade shows. “I think it’s an ideal time to have a one-on-one with designers who always perceive that if you write books or appear in magazines, that your life is perfect, that your clients are perfect, and that those clients spend perfect amounts of money. It’s a good time to be able to say to them, hey—we’re not that different, we all have the same problems.”

Wolf’s third design book, Lifting the Curtain on Design, is a beautiful pictorial of his works—including his travels, which serve as an inspiration. “I’m very pleased with it,” he says. “It’s a great reward to photograph the images in it, to do the travel, to conceptualize, to work on the design of the book, and to see it come together. To me, that’s an enormous reward. It speaks of who I am and what I believe in.”

The designer avoids visiting the typical jet-setter locations. “Every year, I pick a place I have never been to before,” he says. “This year I was in Uzbekistan, and in previous years I’ve visited Namibia, Syria, Borneo, and Iran—all so different.”

The results of Wolf’s journeys appear at VW Home, the luxury showroom in New York where the treasures he hand-picks on those inspirational trips are available for purchase. Antique furniture, lighting, home-decor accessories, fabrics, and bed linens all come together in a globally diverse mix of styles. 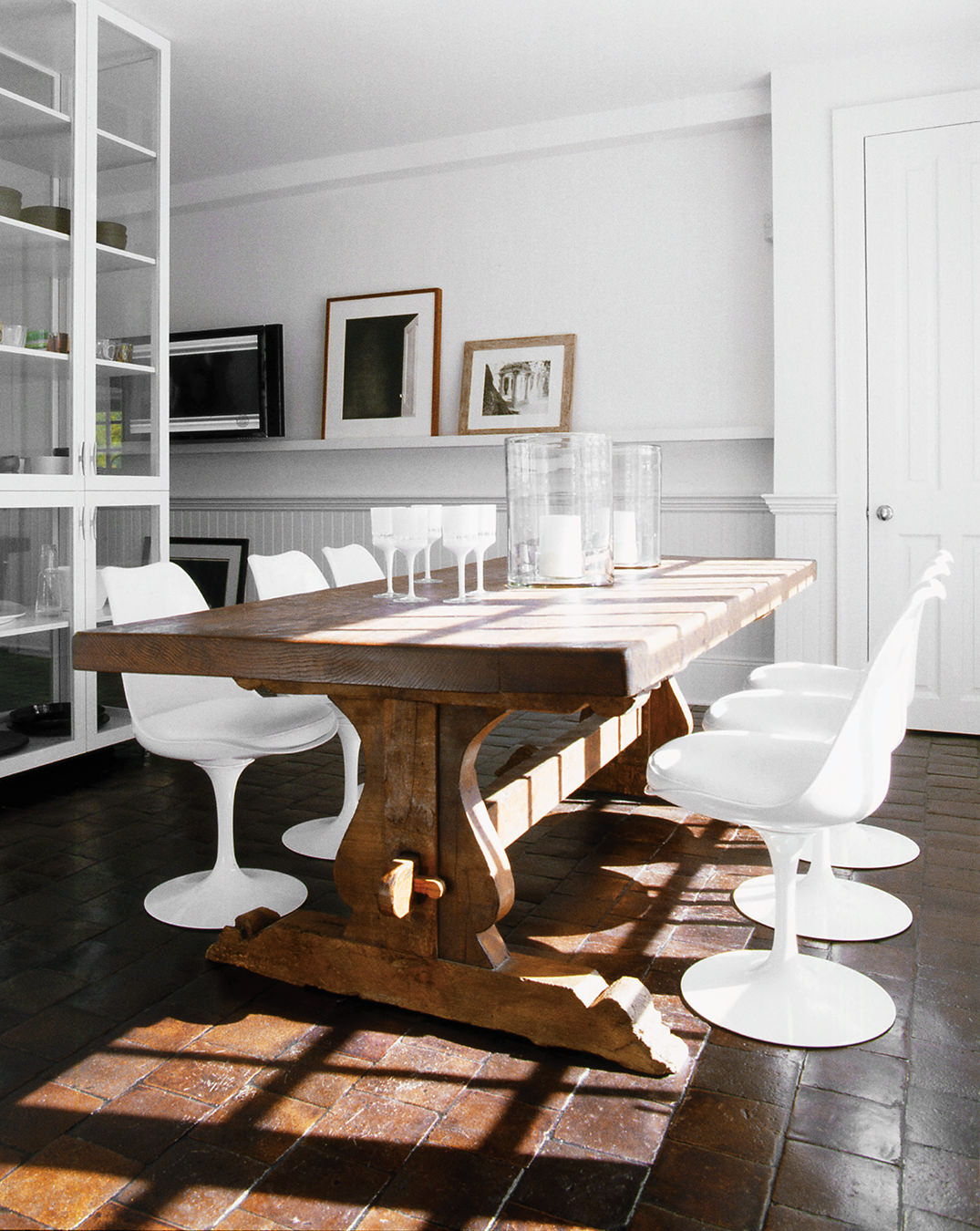 A Vicente Wolf–designed dining area mixes modern with traditional, one of his signature styles.

Wolf has been included in Architectural Digest’s AD 100, was named one of House Beautiful’s 10 most influential designers in the United States, and Interior Design magazine inducted him into its Designer Hall of Fame. Any award he still covets? “It’s a double-edged sword, because the award is for your accomplishments, and what is more important—the accolade or the accomplishment? Would I like to win an Academy Award? I’d love it. Nobel Peace Prize? Even better,” he says with a laugh. “But, I mean, that’s not really­ what drives me. I love talking in front of people, and love the awards, but it has more to do with doing things that you are pleased with and that work well for you.”

When asked about his colour palette of choice this season, he replies, “Pearl grey, soft blues, camel—I gravitate towards soothing colours.” Wolf’s preferred “pop” colours are “apple green and coral, in confined spaces, like a guest room that people don’t walk into all the time. I also like intense colours in confined spaces like a powder room or library, something where you can get the full impact of that colour and then leave and enter a more neutral environment.” The philosophy behind that is “like the sorbet in the middle of a meal,” he says, smiling.

Many designers are working with bright colours, but is there a white wall comeback in the works? “I always do white walls. I’m much more interested in the temperature of politics and the temperature of social interaction than necessarily what most other designers are doing,” says Wolf. “I’m doing what to me is the right thing. If you work within a trend, it a) puts you with the crowd, and b) becomes dated.” The options as a designer are to “have a point of view that transitions in time, but still stays. It doesn’t say much about your core if you jump on every trend—you never really get to express yourself because you’re always following the crowd.”

Has he always been true to himself? “For better or for worse.”