Kunley points out the window of the van, across the valley toward the mountain face beyond. “That is where we are going tomorrow,” he says.

Not immediately I don’t, on account of it being a very small white spot on a very large and very sheer wall of mountain rock. Even when I see it, I don’t really believe it. That is to say, I can’t believe any creature with fewer than four legs—or at least anyone not named Tenzing—could ever go where my guide is pointing. The Tiger’s Nest is poised on a cliff edge 3,120 metres above sea level, reached via a short uphill drive from the Paro Valley, followed by a 900-metre climb. You’ll need strong legs, good shoes, a chunk of disposable income, and a valid visa. The first two get you up the mountain; the latter two get you to Bhutan.

Bhutan is not a casual drop-in kind of country. Located east of the Himalayas, it is bordered by Tibet to the north, and separated from Nepal by India’s Sikkim province. Bhutan recently made news with its voluntary segue from absolute to constitutional monarchy. It is also famous for creating the concept of “Gross National Happiness”, a development strategy that places quality of life issues on a par with economic ones. Travellers seized on Bhutan as the new thing. But it’s no Nepalese-style backpacker haven. To qualify for a visa, potential visitors must hire local tour companies to handle hotel bookings and arrange sightseeing itineraries. (Some have said that the Bhutanese government imposes a quota on tourist numbers but my guide insisted that anyone who wants to pay the going rate is welcome.) This regulated approach ensures that every visitor will be forced to spend a certain amount of money while having a controlled, hand-held experience. Nobody goes to Bhutan for spring break. 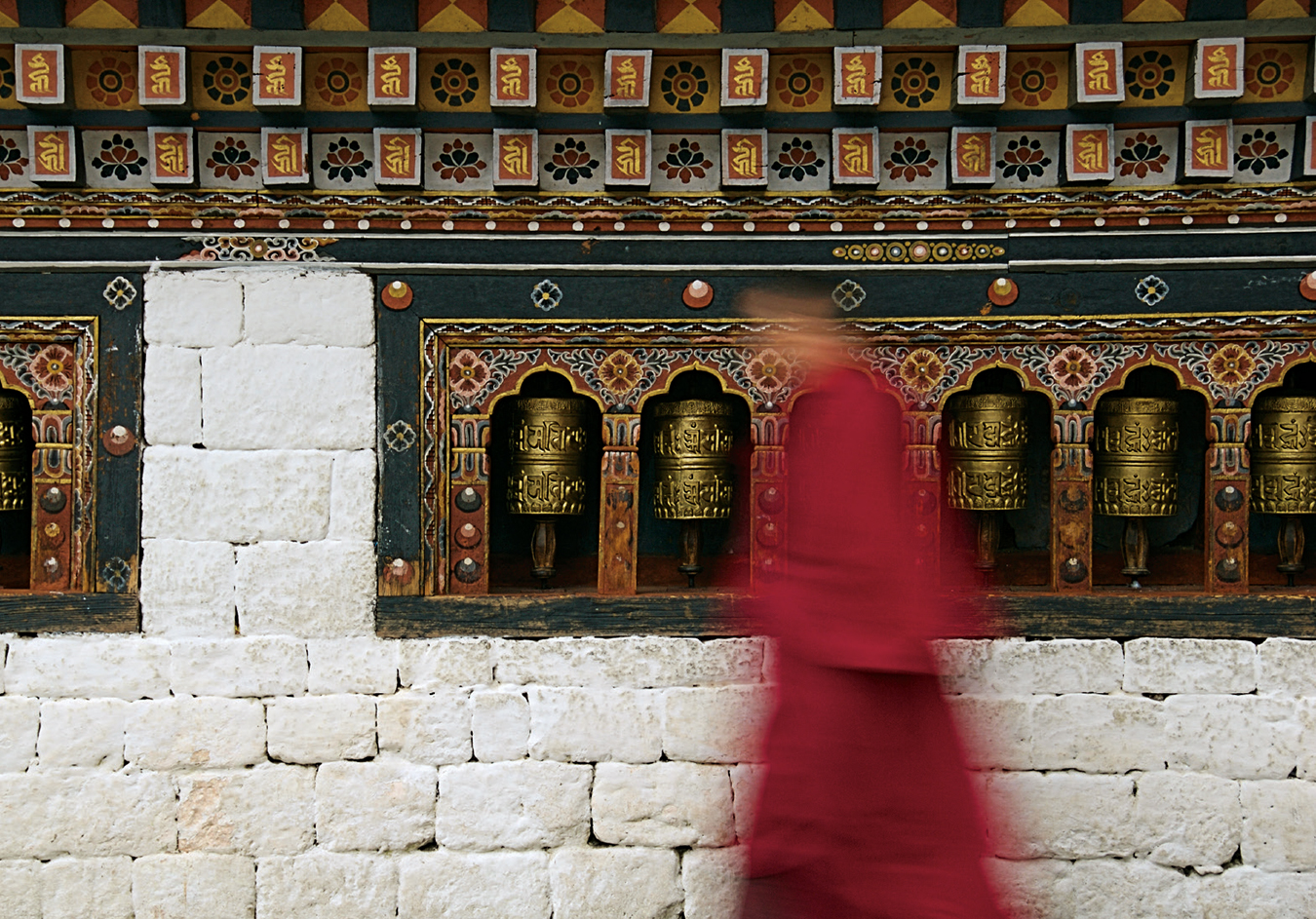 The Tiger’s Nest is to Bhutan as the pyramids are to Egypt: essential to any itinerary. Legend says that in AD 746 the revered Guru Rinpoche flew to the spot on a tiger’s back and meditated there for three months. In 1692 the monastery was built around the sacred cave where Guru Rinpoche’s imprint is said to remain in the rock. Frankly, things might have been simpler had Rinpoche stopped to meditate on the main street of downtown Paro, but apparently tourism is not a consideration where enlightenment is concerned. A visit to the Tiger’s Nest is no simple matter. There are two options, neither of them a flying tiger. You can climb it yourself. Or you can take transit, which in this case comes with hooves. Until somebody decides to build a chairlift, your gondola will be a donkey.

Be warned—if a mule is how you roll, your guide may not approve. “That is a useless way to go,” Kunley says. “The struggle to reach Taktsang is part of the experience. This is how you show your devotion.”

Kunley knows he can say this to me, because in our case the seated option has not been considered. “I think you can make it in two-and-a-half hours at the most,” he assures me. I do not feel assured. One way or another I expect a memorable day—perhaps this is what they mean by muscle memory.

The slope begins gradually and I begin quickly. “Slow down,” Kunley warns. “We have a long way to go.”

Bhutan is famous for its concept of Gross National Happiness, which places quality of life issues on par with economic ones.

This is not rock climbing—the dirt path is frequently cut with steps as it switchbacks up the steepening hillside. At 900 metres, the trail is a little longer than Vancouver’s popular Grouse Grind. So it’s manageable. Still, I am soon wheezing badly. Kunley is dallying so as to keep me in view. About 15 minutes in, we pass another climber and I am filled with triumph. It’s a mother carrying a child on her back, but still. Eat my trail dust, lady.

Even here on the mountain, Kunley wears the national costume of Bhutan, a plaid robe with white scarf and black stockings that is mandated for certain professions like guides and civil servants, and for everyone on special occasions. It’s a reminder that Bhutan is still a tightly controlled society. Recent years have seen increasing incursion from the outside world, however. The 21st century brought the Internet. Cable television had arrived in 1999. “Nobody went outside for a month,” Kunley tells me. “They went crazy clicking the remote.”

Young Bhutanese now love online games. And three days a week, in a town close to Paro, there’s a disco. But traditional entertainments survive as well. Bhutanese people are very fond of archery, with target ranges as common as soccer fields. They love throwing khuru, large leaded darts, and playing a snooker-like board game called carrom. Bhutanese people enjoy a stiff drink. And most people drink tea—but when they drink coffee, they drink Nescafé.

This has led to low voltage in my personal happiness meter. It’s undeniably a good thing that Starbucks has not made it into this remote country. But still, I crave espresso and Nescafé is no substitute. I’ve been increasing the daily dosage, dumping two or three Nescafé packets into a single cup just to get the necessary jolt. Today Kunley has promised me a rest stop halfway up the trail—a chance to sit and suck back instant coffee before the final push.

Soon I am resting my bones, catching my breath, and reflecting on how circumstances alter cases. Our arduous climb along a sunlit trail has led us to a mountainside terrace with a perfect view of the now not-quite-so-distant Tiger’s Nest. Beside the terrace is a long boat-shaped dining room made of timber where a buffet lunch of local specialties awaits weary climbers. Just above the terrace a mountain stream turns a prayer wheel, its bell ringing in the clear air, steady as a fire alarm. Birds skitter about seeking crumbs, branches rustle in a gentle wind, and on a rocky outcrop a blond dog stands looking for things to chase. With the exertion of the climb temporarily subsiding into loose-limbed relaxation, hot water and two packets of Nescafé have been transformed into the nectar of the gods.

“The hard part is over,” Kunley says. We are making excellent time, and I want it stated for the record that the coffee break does not count against my official time. Kunley agrees to make a note of it.

Bhutan is a Buddhist country—“100 per cent,” Kunley insists—dotted with temples and shrines. Especially sacred are the places visited by Guru Rinpoche. In the eighth century, eight evil spirits terrorized the land. Guru Rinpoche assumed one of his eight manifestations—the wrathful Dorje Drolo, who rides a tiger—to subdue the malicious spirits in eight different places. Taktsang is the most sacred of these.

And, miracle of miracles, it is getting larger. What seemed impossible from the valley floor is now looking like an achievable goal. The apparent impossibility of the task stems in part from the sheer granite cliff that drops away from the front of the monastery. Which is why the trail does not approach Taktsang directly—the monastery is to our right as we ascend. Soon we are standing slightly above the Tiger’s Nest, looking at it across a chasm bridged by strings of prayer flags. We descend and follow the path along the cliff face, over a wooden bridge, past a small waterfall, and up stone stairs. Not including the coffee break it has taken about an hour and 20 minutes—the best time ever for one of his clients, Kunley says. At last we stand atop that impossible cliff. We are in the Tiger’s Nest.

“The struggle to reach Taktsang is part of the experience. This is how you show your devotion.”

We remove our shoes and drop a contribution into the alms box. A monk pours saffron-scented water into our cupped hands. Following Kunley’s lead I sip a bit and splash the remainder on my forehead. As we gaze at the Paro Valley far below, Lama Rinzin greets us. He has charge of four other monks who live full-time in the monastery. Food and supplies are brought up on pack ponies and donkeys at government expense. 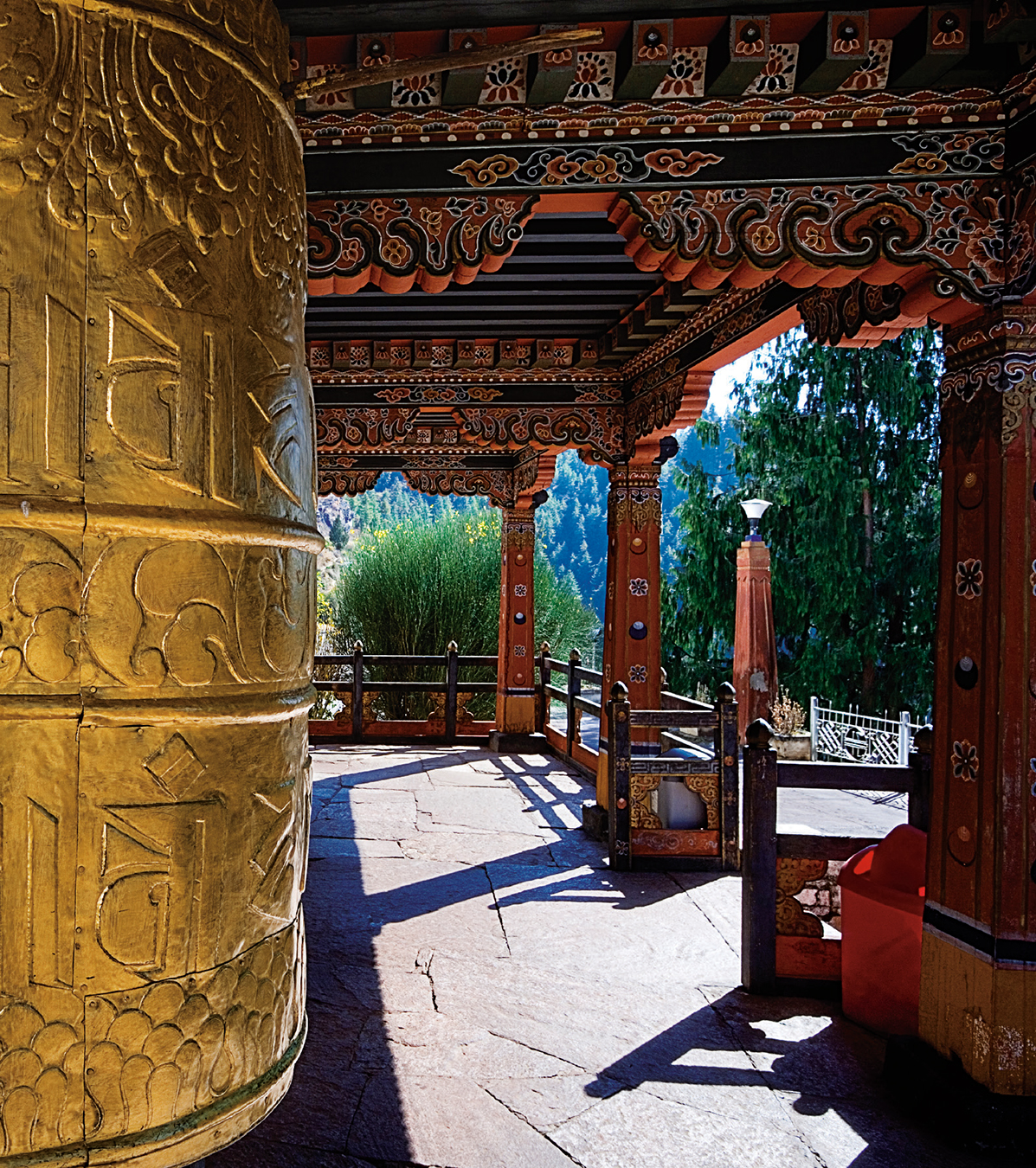 The Tiger’s Nest has seven temples, not all of them open to the public. Three are in the main building. A fire in 1998 caused serious damage to the complex, leading to extensive renovation. As a result, the statues in some of the temples are only a few years old. But in the holiest temple, built around the sacred cave where Padmasambhava (a.k.a. Guru Rinpoche) meditated, things did not go as planned. Monks say the attempt to remove his statue for repair was greeted with a sudden storm, bolts of lightning and peels of thunder splitting the air above the Tiger’s Nest. The monks understood. Padmasambhava would not be moved.

In the temples there are bowls for offerings to the deities. Deities, it would seem, are fond of crackers—bright packages of snack biscuits are piled up on the altar. Tiger brand, of course.

It’s a beautiful place and a sublime setting. But there is an extra element of magic that attends Taktsang. The deities and the incense, prayers and saffron, the wonder of this stunning pagoda perched in the sky, blend with the pure physical exhilaration of completing the climb. Ascending 900 metres guarantees you will be high on arrival.

Too soon it is time to descend. “Do you have a rope?” Lama Rinzin teases. On the way down I teach Kunley to sing “The Happy Wanderer”. I even throw in a verse of “The Lonely Goatherd”. At such times you really have to sing. Simon Cowell be damned.

“So I set the Kunley record?” I ask. “Maybe I will get my own temple statue.”

Instantly it occurs to me I have gone too far while still on Guru Rinpoche’s personal turf. “The god might be angry with me,” I fret.

That’s a relief. But another verse of “The Lonely Goatherd” might be pushing it.

Conscious Capitalism: Can Commerce Save the World?

At Home, at the Stanglwirt