In the miasmic haze of music downloads, legal and otherwise, Michael Bublé’s grandfather, a figure important enough to the story that you can draw a parallel between him and Paul McCartney’s granddad in A Hard Day’s Night (“He’s a clean old man, then, isn’t he?”) would be a little unhappy. Because on most reputable sites, you are hard pressed to find the songs he loves, the songs he played, on long-playing vinyl albums, and a few 45 rpm singles, for his little grandson to listen to alongside him. He apparently encouraged the little chap to sing along, sing it loud, and, as time went on, to actually entertain the notion of, well, entertaining. “Not just Dean Martin, and Al Martino, you know, but The Mills Brothers, The Kinston Trio, The Highwaymen.” As in, “The Legend of Tom Dooley”, or “The Gypsy Rover”? “Oh yeah, absolutely, we listened to all that stuff. And Frank, and all the rest, too.” These days, Michael Bublé has taken the sensibility his grandfather nurtured in him, and through the auspices of another mentor, David Foster, has taken his career, as they say, one turn after the far star to the right, tonight.

There is a new record, It’s Time. Foster’s role as producer is fairly apparent, but only in the sense that there is a populist at work, nothing too esoteric or alarming to anyone who actually grew up on the songs covered here, but also with enough edge to it, enough feel, to make it palatable to a much younger audience. That being said, what was grandpa’s reaction upon first hearing the new record? “He listened for a few seconds, and then said ‘What’s with all the NOISE? I can’t hear your voice! Can’t you guys just have a guitar or something?’” Bublé smiles broadly at the recollection, and adds “No way to make him happy. He likes it the way he remembers, just me singing along next to the record player. And then singing by myself.” You need only imagine a young Pat Boone, hitting the real big time with “Love Letters in the Sand”, update slightly, and you have a solid sense of Michael and his cachet. 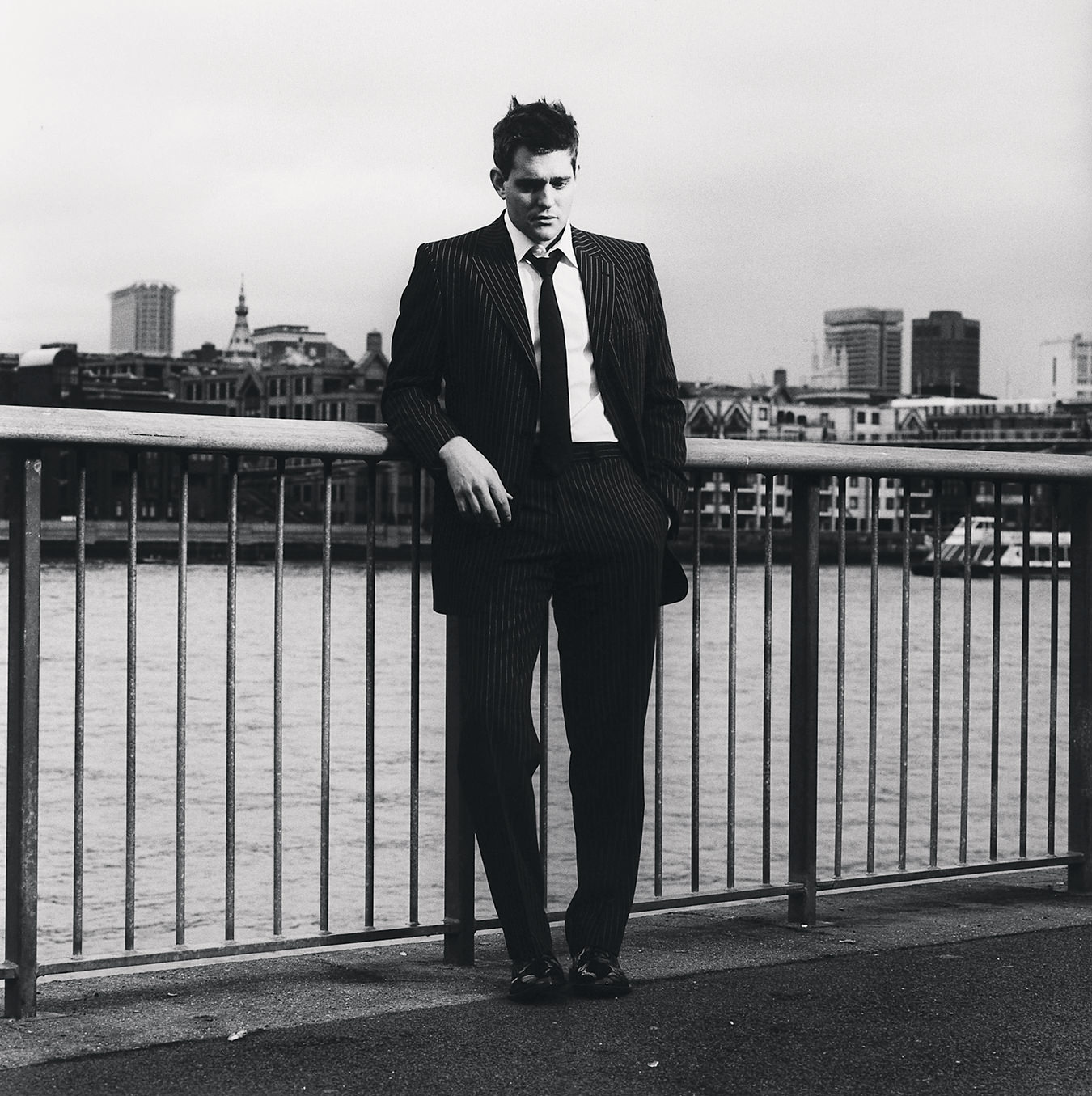 He strays not from the crooning, ultimately reassuring approach to popular song that Sinatra brought to its highest expression, inflecting and genuflecting to the notes in a way that approached jazz in its truest sense, but, not being Frank, and not pretending to be Frank, means Bublé aims at attainable targets, and with this new record, succeeds. Not overly reverent, the approach here is to give fairly well worn tunes a bit of new life, snappy arrangements, sharp playing (including Foster, who even plays bass on a couple of tracks). And song selection, then, becomes paramount. “We had a lot of discussions about that. David had a long list, and some of those I took to right away, others I just said no. This time around, it had to be a record with songs I really wanted to sing. I have to admit, though, that for some of the songs, like ‘Quando, Quando, Quando’, I didn’t really want to do them. But David is persuasive, and persistent. So, with that song, I just said ‘Well, if we do it, let’s slow it down, and make it a duet. Then maybe.’ And so we did it.” The duet is singularly successful, due in no small part to Nelly Furtado, who sings with him on the track. “We recorded it with another singer, a brilliant singer, but she’s only 17 or so, and I just couldn’t do it, singing a song of seduction to such young girl. Just couldn’t get into it. So, I suggested Nelly, called her up, and we were all a little surprised, actually, when she said yes. Then when she came to the studio, she brought her agent with her, who sat down with us outside, while she went in and recorded it. We listened on the monitors, and you could just see everyone, including her agent, really sit up and say ‘Wow, that’s amazing.’ It just seemed like she went with her gut, and she really killed me, I had to play the straight man on that song.”

Michael Bublé seems to elicit, in interview, a lot more text than other singers, for better or worse. There are even those writers who feign surprise (how else can you explain it) when Michael turns out to be red-blooded, young, and a supremely charismatic stage performer who draws more than his share of female attention. Not that he ducks the issue, or willingly brings it forward. “I was pretty impressed with myself, that’s for sure. A kid from North Vancouver, doing gigs all over the world, hanging out with Paul Anka in Vegas, getting to know David, singing with such great musicians backing me, it still is a rush. But, I’m engaged now, to my first sweetheart, and it’s all cool. But there was a wild time there for awhile, for sure. Then someone just took me aside, on a plane one day, and said ‘Listen, man, you’re not actually believing all the hype, are you? That’s not the way to build a sustainable career’. And it hit me, I knew he was right. So I changed, pretty much on the spot.”

He gets quite worked up about the NHL’s lost season; “Man, I just can’t believe they would let it go down like that. It’s HOCKEY, for God’s sake.” He has now performed with many of the industry’s biggest names, and in auspicious circumstances. But he is, in a thoroughbred kind of way, a performer, a singer. He recounts how difficult it was to get down to a manageable number of songs for the new record, and how some songs “just disappeared. We did them, rehearsed, but somehow never got to the final stage. Like that Eagles song, ‘Heartache Tonight”. It has a great groove, done like Bobby Darin might have done it.” And sure enough, he breaks out, as all natural born singers will do in the course of pretty much any conversation, breaks out into song: “There’s gonna be a heartache tonight, a heartache tonight, I know”, foot tapping, fingers snapping, and then a smile; “That would have been a good one, but it never even made it to the final round.”

That, ultimately, is what Michael Bublé is about; reintroducing great old songs, for a generation that, he has it on faith, will be just as interested in the older, unheard stuff, as he was when his grandfather played it for him. “There are just so many great songs, and I would hate to see them just die.” For him there is literally no such thing as a generation gap. His work on stage fulfills the promise of the songs, that a bit of swing, a killer melody, and a hot band will be the context for a torchy, personable, charismatic performer who knows what he wants to do, and how to do it. Share his childhood dream, share the songs he grew up on. “For me, there is no bigger thrill than to have some young punk, like 19 or so, come up to me after the show and say ‘Hey, man, my girlfriend dragged me here tonight, but you know, it was kind of cool.’”