There is a long history in Florence of patrons and generous benefactors of the arts. Dating back to the 15th century, people such as the Medicis have been fervent advocates of master creators in pursuit of beauty. Both the Early and High Renaissance periods of art and architecture in the city saw tremendous growth through commissions and philanthropic support. This fostered an era that influenced artistry across Europe. Today, that tradition continues with Numeroventi, a contemporary art centre and residency in the heart of the city.

Founded by Martino di Napoli Rampolla, Numeroventi was born out of the idea of bringing emerging and established talents to the Tuscan capital for an extended sojourn where they can develop and study their respective mediums. Photographers, sculptors, musicians, directors, and the like have been called upon. At the end of each residency, a site-specific exhibition, planned in collaboration, showcases the work, with one piece staying in the permanent collection for future exhibitions. While the format of Numeroventi is as neat as the assembled decor—a mix of custom-made furniture, found objects, and well-fitted pieces from Danish furniture-makers Frama—the path that led there was not always so clear.

“When I was a teenager, I had a deep uninterest towards anything,” di Napoli Rampolla explains. “Through university, I was not passionate about anything I was studying, but as a student, I knew that I liked creative matters.” It wasn’t until Bjørk, an independent boutique, opened in Florence (in 2013) that some direction began to call. “It was amazing how a place opens in the city and changes completely my perspective,” he remembers. “Thanks to Bjørk, I discovered design books and magazines from all these different worlds of people doing interesting things. And it just made me say, ‘wow.’ I didn’t know why, but it sort of clicked.” 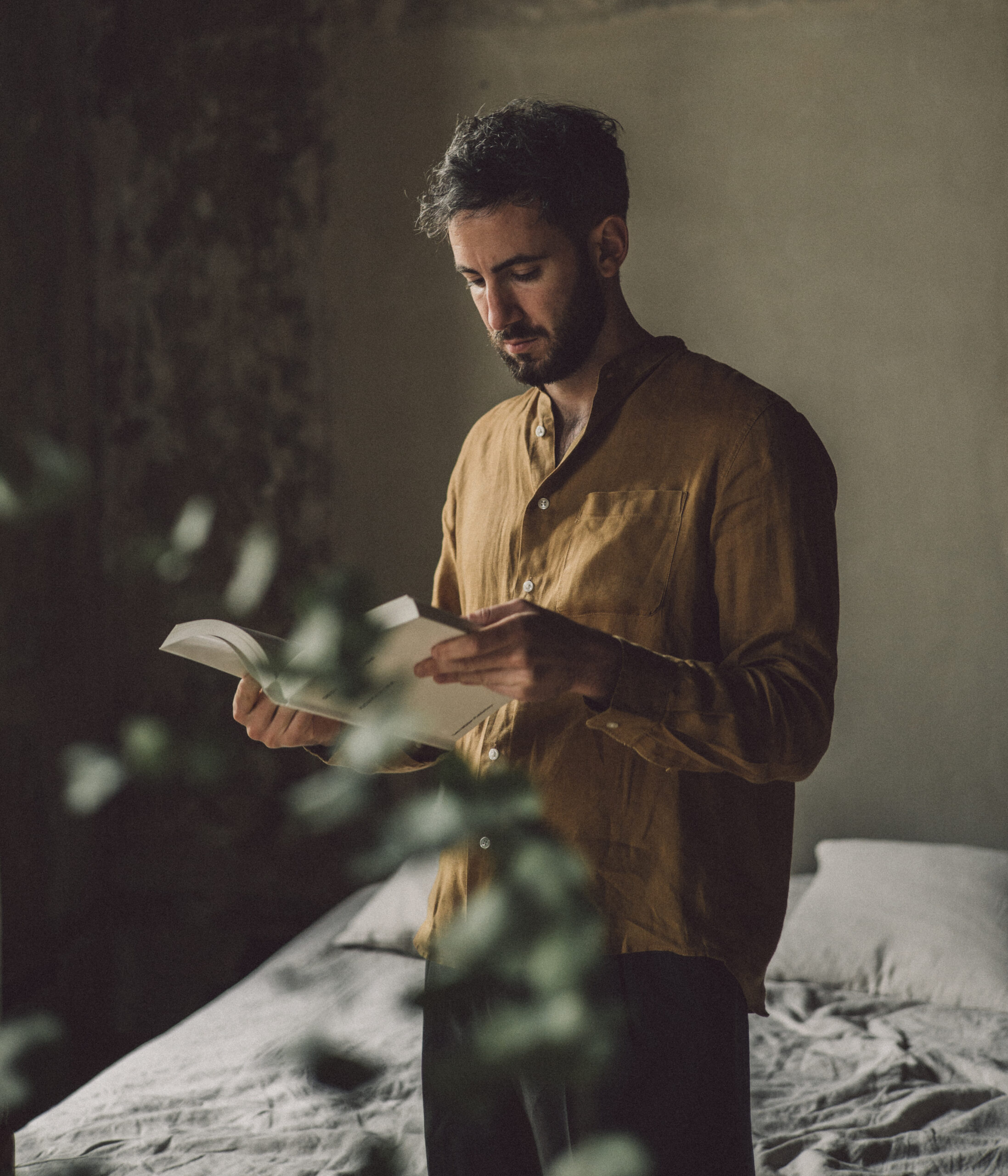 Discovering and developing the talents of each artist-in-residence is the mandate of Numeroventi founder Martino di Napoli Rampolla and his team.

Thumbing through the pages of these magazines, learning about creative founders, and seeing things through their eyes broadened di Napoli Rampolla’s horizons beyond Panzano, the municipality where he grew up in the heart of Chianti and an hour outside Florence. “These stories made me want to belong to that world.” Deciding he needed to get away, di Napoli Rampolla travelled to Barcelona to study and work as a graphic designer, and he immersed himself in the local creative community.

Swept up in the swell of creative energy, arriving back home fell flat for di Napoli Rampolla. “I was coming back to Tuscany and just knew, this is not it,” he laments. “We have an amazing amount of cultural depth in Florence, but it is not shaped around living humans. It’s not up-to-date. It’s not dancing; rather, it’s just beautifully staring at you. Of course, people will still get inspiration from the city because it’s amazing. But then I started to think, how can we not only look at it but also play with it a little bit deeper?” 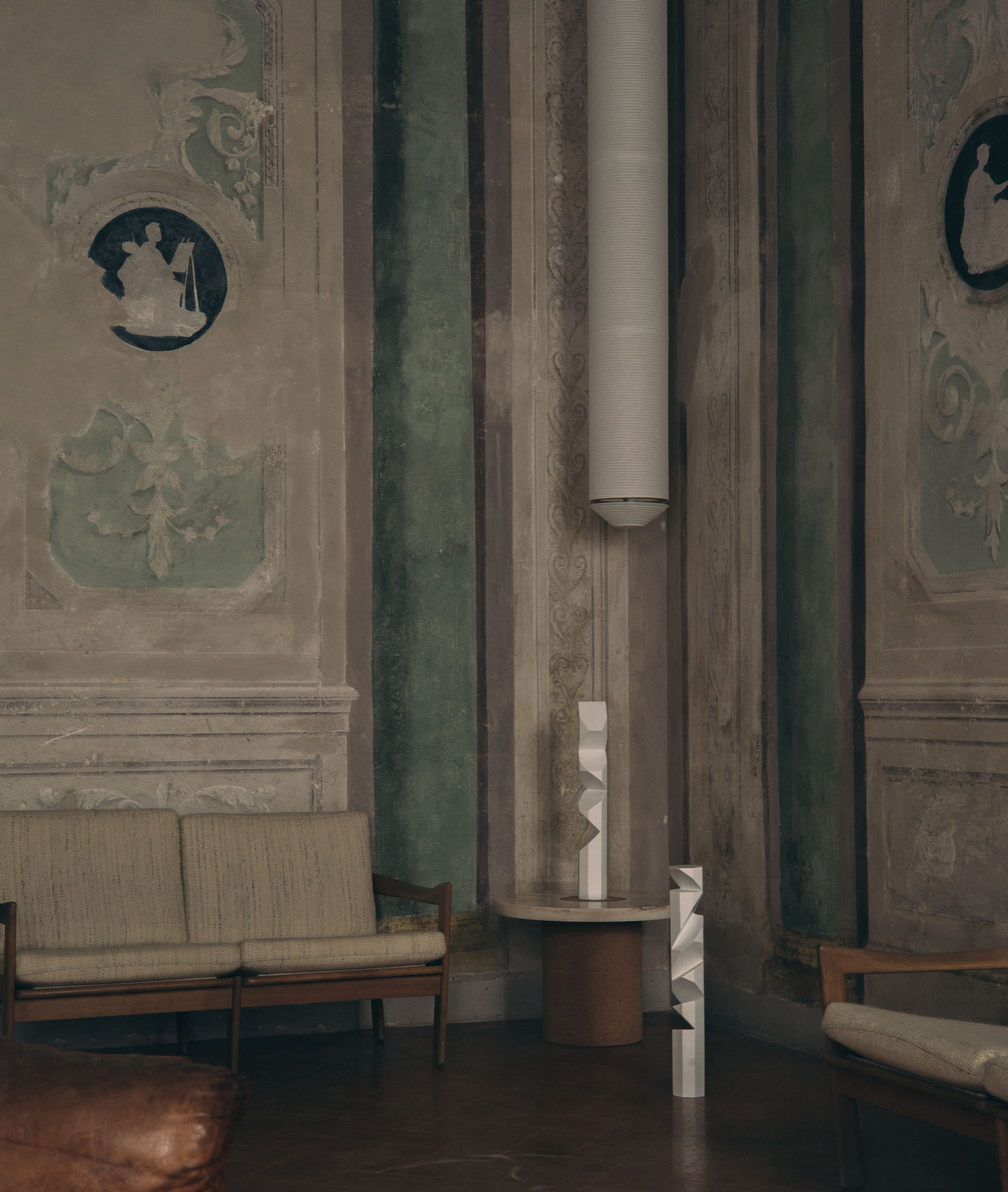 From there, early iterations of Numeroventi percolated. “When I decided to do something about this situation, I didn’t know exactly what it was, I just knew that I was going to do it,” di Napoli Rampolla recalls. “For me, it was really like, let’s do something that activates some processes, connects people, and creates space.” Like a sculptor examining a piece of Carrara marble and readying the first strike, he let the process take over and, with a distinct objective in mind, gave way to the form as it naturally took shape.

Four years on, inside the 16th-century Palazzo Galli Tassi with its historic stone, grandiose frescoes, and lofty architectural casement windows, there is a palpable sense of refinement. In each of the seven apartments, spanning four floors, there is space for discourse. “My wish is for everyone who comes here to challenge themselves and challenge their practice. For them to discover some new sides of themselves.” And they do. Every person, artist or guest, who resides at Numeroventi further develops their own aesthetic sensibilities and emotional faculties. 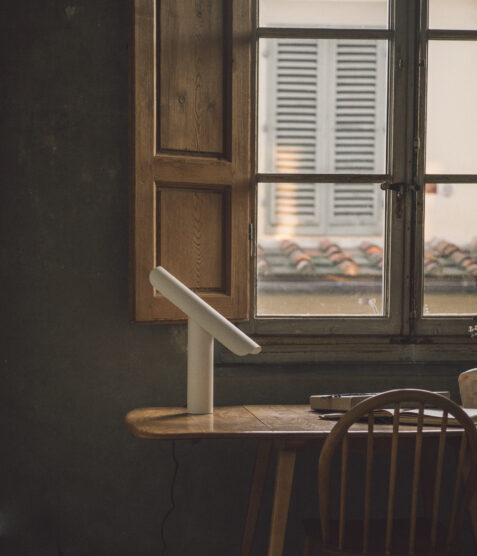 On the table, an excerpt canvas of Obscure Kin by Eleanor Herbosch. Lamp by Frama. 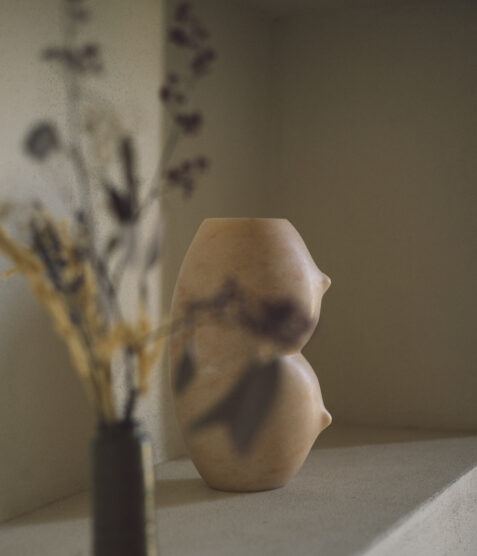 There is a community that has been built around Numeroventi—not only its online following but a real social fabric offline. Exceedingly, this devoted global citizenry presents humanistic ideas—such as their summer 2020 group exhibition So Close So Good, on the societal effects of the COVID-19 pandemic—through a utopian perspective of collective work. The nationwide lockdown in Italy at the onset of COVID-19 left Numeroventi quiet, and like many businesses around the world, the residency found itself without its usual visiting rota of guests. Not one to let any opportunity go by, di Napoli Rampolla invited 14 of the city’s prominent artists to utilize the vacant space.

In So Close So Good, the collective of artists responded to questions such as “How can local resources best inform and dictate the future of art and design?” with artworks propped on each floor. Featured artist Anna Rose strung up a column of eggs cascading into drapery from the ceiling for Walking on Eggshells, which explores the fragile relationship between culture and place. In another room, Justin Randolph Thompson fashioned a commemorative plaque, marking the location where partisan Alessandro Sinigaglia, a Jewish African American, was brutally murdered during the Nazi fascist occupation of Florence—a nod to another of the exhibition questions, “How do we contemplate borders and inclusivity in the post-pandemic age?”

Saved from typical forms of social valorizations such as status and wealth, the moment you enter Numeroventi what matters most are the ideas and understanding you bring to its halls: concepts and conversation that not only further your creative experience but that benefit the collective as a whole. For Numeroventi at its core is a place for community and collaboration. Each interaction is dependent on the participant, whether artist or guest, and their contributions. Languid hours pass with the Tuscan sun, as world topics and personal minutiae are laid out on the table. A vulnerability consumes and releases you from small talk like the rush of flavour from a Super Tuscan wine. Every room of Numeroventi, whether in the kitchen at dinnertime or in the gallery above, is highly interactive—designed to be fully engaged with. 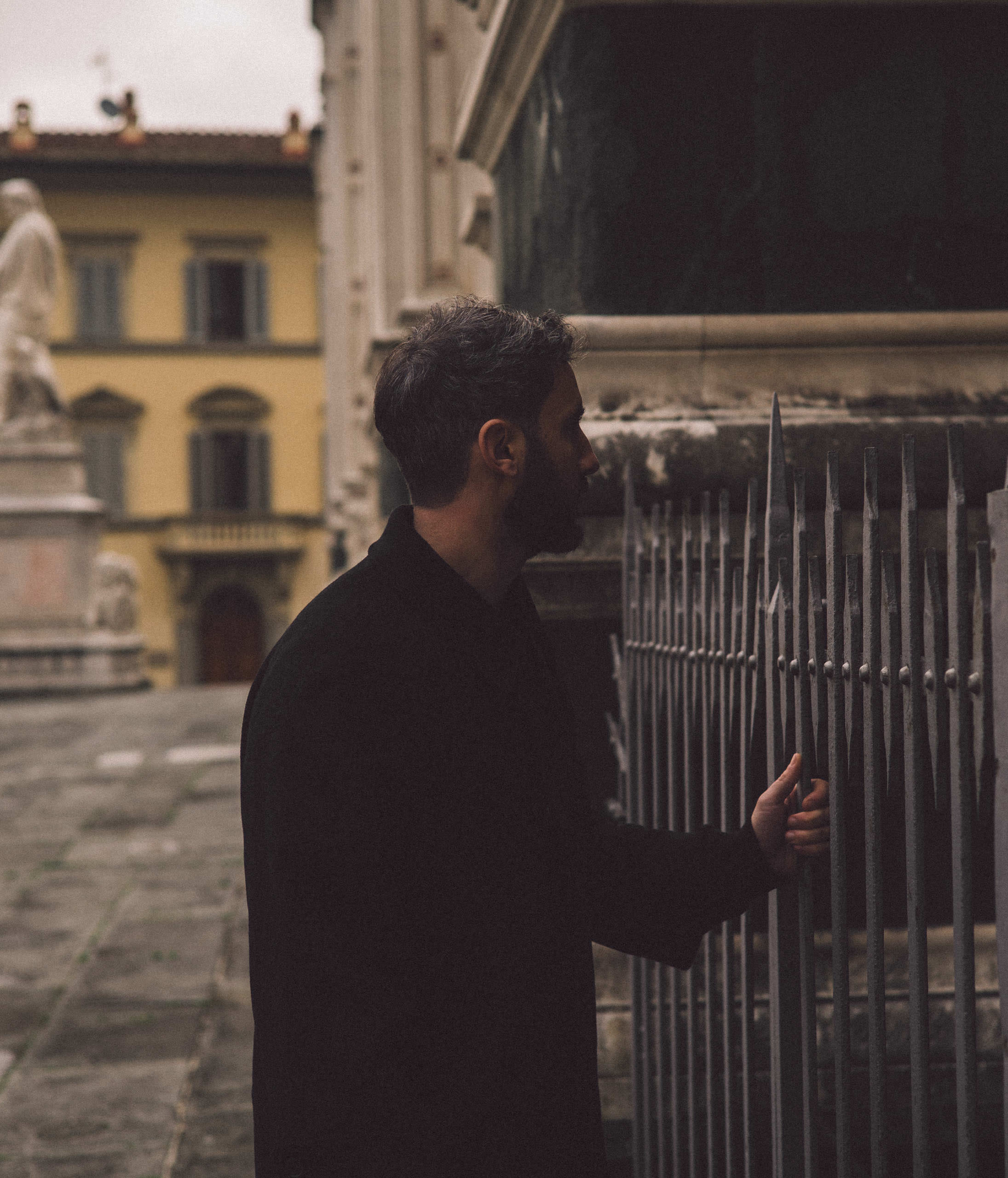 With its intimate scale and dedicated team, discovering and developing the best qualities of each artist-in-residence is the mandate. Possessing an innate love of design and demonstrating sensitivity and thoughtfulness toward creative pursuits, di Napoli Rampolla is in a unique position to keenly examine the strengths and weaknesses of his guests and help reveal their intrinsic virtues while gracefully challenging their limitations. “People feel when they come here that there is this energy that gets created. By moving objects around, fostering relationships with other artists, getting us artists all together in a room, there’s an invisible but tangible sensation.”

Artists here have the chance to share their ideas, showcase their personal projects, and receive feedback from fellow creators in a peer-reviewed framework. Musician Dev Hynes, also known as Blood Orange, who has famously produced for Solange Knowles, Florence + the Machine, and Mariah Carey, composed Suite Per il Servo Moro during his Numeroventi residency, away from label restrictions and industry expectations. The suite features Hynes on the piano, cello, horns, and synth, doing voicing, engineering, and mixing entirely on-site. The 20-minute arrangement takes you through a procession of saccharine and dramatic concepts that Haynes conceived during his residency in an abstraction of work that departs from his usual projects. 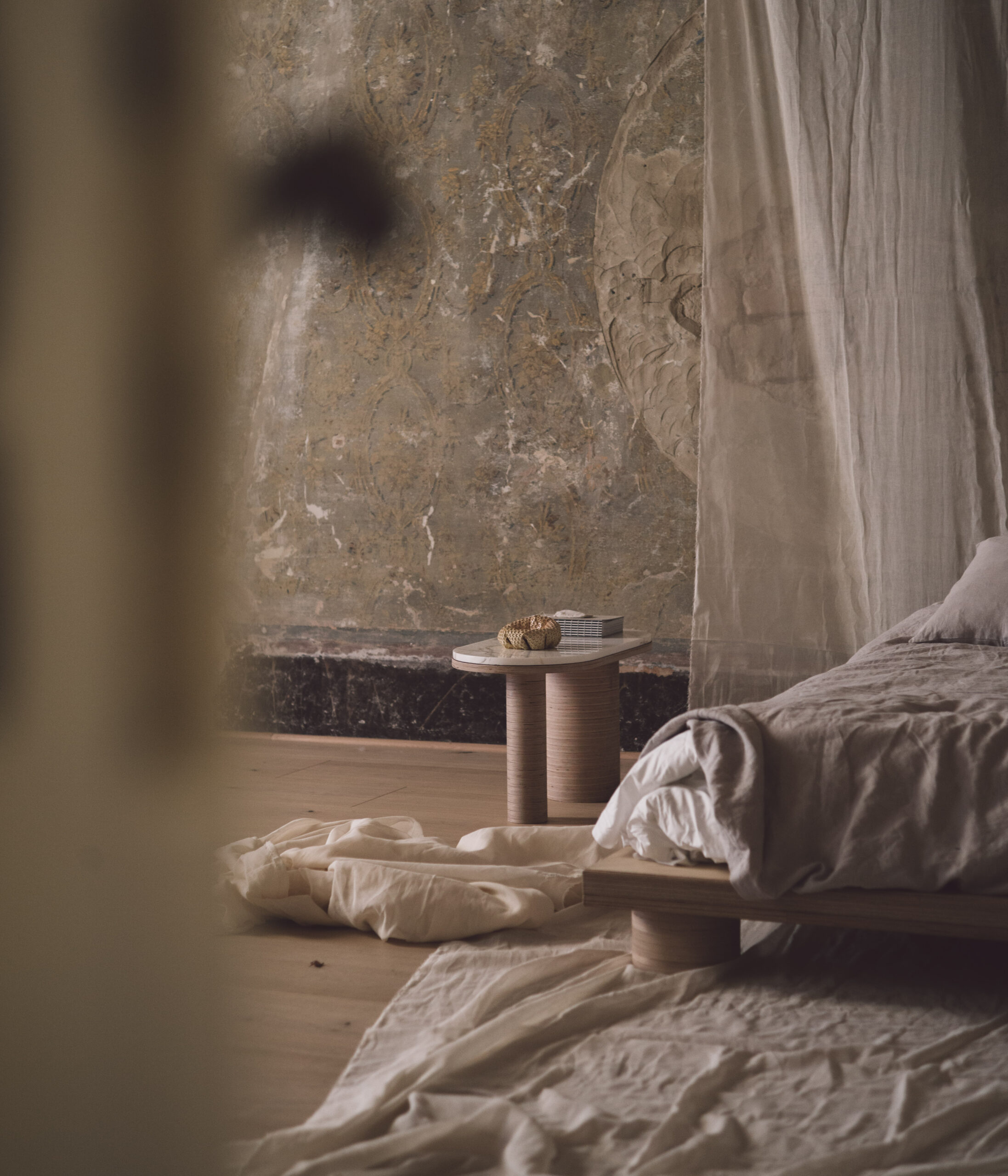 At a dinner out before Florence went into its second lockdown this past fall, di Napoli Rampolla was asked, how do you measure one’s success? “At first, people at the dinner table said, through followers or earnings, but we started to talk a little bit further, and then I saw that I measure success today in how many times I am able to put myself outside of my comfort zone and how many times I’m able to feel uncomfortable and find new paths to improve.”

The positive critical atmosphere encourages the sharing of projects and promotes a culture of creativity and collaboration. In this regard, Numeroventi is a rehearsal hall for life. It is a space in which artists can test out their whims and expand their limits.

Recognizing the important connection between physical space and fostering a community shaped through culture and steady social forms is more critical now than ever before. During a time when unfamiliar circumstances and wavering systems seem inhospitable, Numeroventi stands as an equable beacon in Florence of creativity and optimism. As the world gets back on its feet, dusting off 2020, Numeroventi moves forward as an essential foundation, creating communities of artists and guests that address malaise, and foster creation and discourse around real world ideas in a physical space where they matter most. 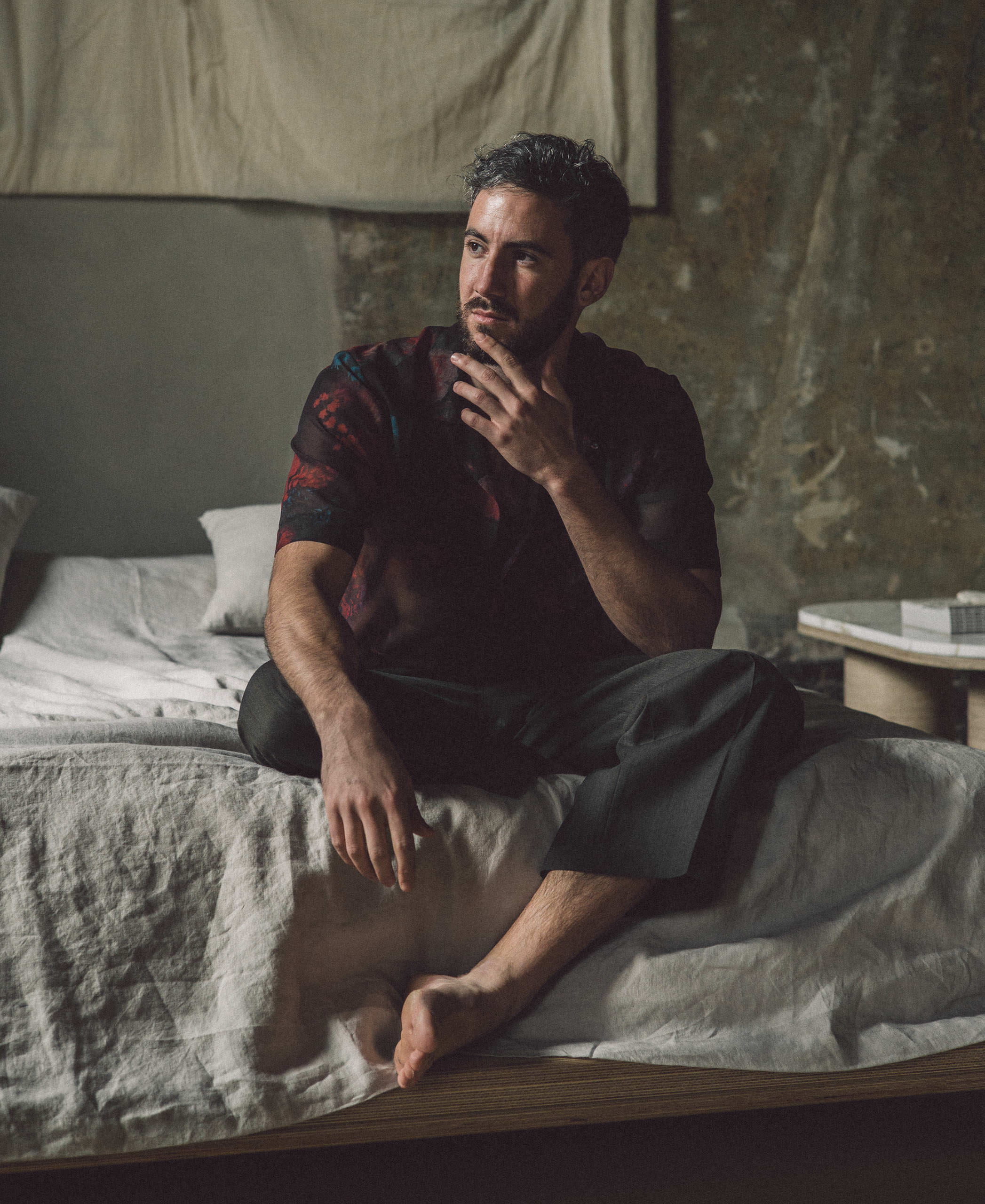 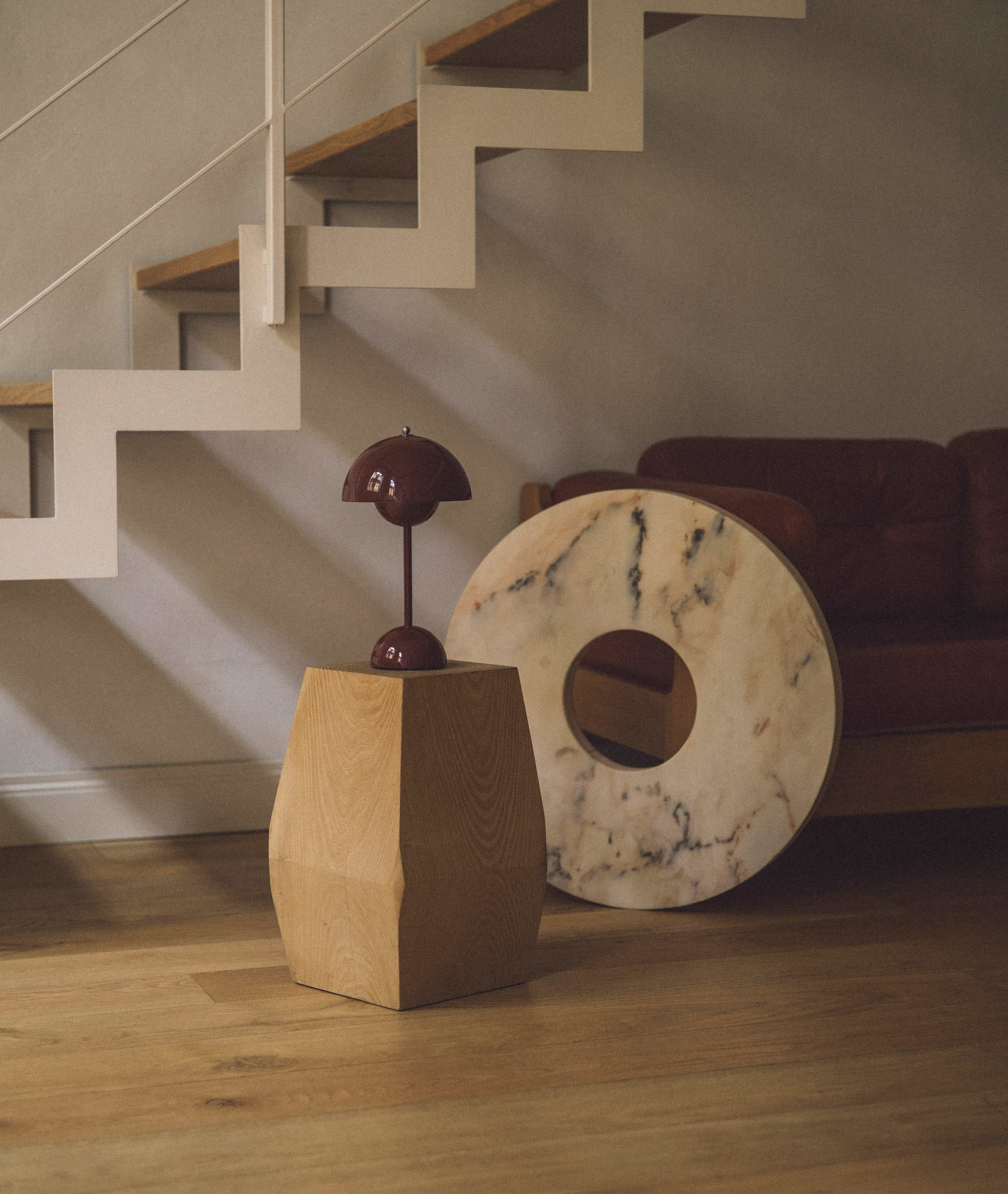 Living Under Lockdown in Italy

In Conversation with Guido Fiorentino: Fifth-Generation Hotelier of the Grand Hotel Excelsior Vittoria