The entrance to Hombre farm, a small family-run business in Modena, Italy, is a long lane flanked by cipressi (cypress trees). There is a guttural rumble as the Maserati Levante, engaged in sport mode, surges down the stretch of road. The brakes catch as the car pulls up to the barn. It’s a theatrical arrival, but appropriate. On a farm that cares for 700 cows and produces world-renowned Parmigiano Reggiano, there is also a collection of Maserati heritage—a century of speed, raw power, and refined design.

The core of the automobile collection is Maserati History 101: 19 of the finest cars Italy has ever produced. Umberto Panini, a Modena native and the patriarch of the family famed for their collectibles empire, purchased the collection before it went to auction in 1996, housing the cars at Hombre, the family farm.

Maserati has changed ownership several times throughout its existence, beginning with brothers Alfieri, Ettore, and Ernesto, as they designed race cars first for Diatto and then for themselves. In 1937, the brothers sold their shares to Adolfo Orsi, who shepherded the marque through racing highs and lows, until Citroën purchased a controlling interest in Maserati in 1968. After serious financial woes, the brand moved to GEPI-de Tomaso, then to de Tomaso-Fiat, and eventually solely to Fiat Chrysler Automobiles. Each change has brought historic developments to Maserati vehicles, and the Panini collection showcases these evolutions.

The collection is arranged by date, with the earliest cars at the entrance, racing through time toward the present as visitors—who are granted access through written requests—tour the space. This curational choice quickly introduces guests to the most historically significant vehicle in the collection: the Maserati 250F. It was driven by Juan Manuel Fangio, and is a prototype of the race car that he used to seize the World Championship in 1957. After this momentous victory for Maserati, the company withdrew from racing. They offered their vehicles to privateer racers, and the next year, Maria de Teresa de Filippis piloted the 250F to become the first female Formula One driver ever. Her autograph is scrawled across the steering wheel.

The Umberto Panini Collection, housed on Hombre farm in Modena, Italy, holds 19 of Maserati’s most treasured vintage and prototype models, including the gorgeously terrifying 250F.

The 250F is gorgeous and terrifying. Skinny wheels on a long tube, all engine and furious horsepower, with the driver tucked into a small cockpit. No safety measures beyond a tiny windscreen and the driver’s helmet and goggles. The exhaust stretches almost the length of the car, and it’s easy to imagine its howl as it tore through Nürburgring and Monaco. The metalwork is a masterpiece, a satisfying blend of rivets and tidy vents.

While the provenance of the collection’s vehicles is immaculate, there is another particularly significant model at the museum. A study in lightness, the “Birdcage” Maserati was a space frame construction of thin tubing, reinforced with cross-sections. With hardly a shell to cover it, the framework actually poked through and was visible to onlookers. The Tipo 61 garnered the most fame, but its later iterations are equally remarkable, and the Tipo 63, also represented in the collection, is a mid-engined V12 marvel—likely too light and fast for its own good.

Motorsport is a financial challenge, and in the 1950s, Maserati coped with this by increasing its output of production cars. Named for Alfieri and its straight-six engine, the A6 was often used for racing, but was available for regular purchase—much the same as a Porsche 911 could be found at Le Mans or on highways. But the variety and beauty of these vehicles is largely due to collaborations with famous coachbuilders. Zagato, Ghia, and Bertone all built versions of the A6. The Panini collection holds perhaps the most striking example: the A6GCS 53 Berlinetta, built by Pininfarina. With only four examples in existence, its scarcity and elegance make it a collector’s daydream.

The remainder of the collection represents iconic production models in Maserati’s history, biturbo cars introduced in the Citroën era that changed the marque’s engines forever. Wild vehicles like the Bora and the Merak, the latter designed by the legendary Giorgetto Giugiaro to compete with the Lamborghini Countach. Crossover prototypes that fall somewhere between a de Tomaso Pantera and a Maserati, oddly futuristic and prophetic. As the current Maserati lineup continues to push boundaries, heading toward a hybrid or electric future, the Panini collection will continue to grow. There is much for Modena to be proud of, and more just down the road. 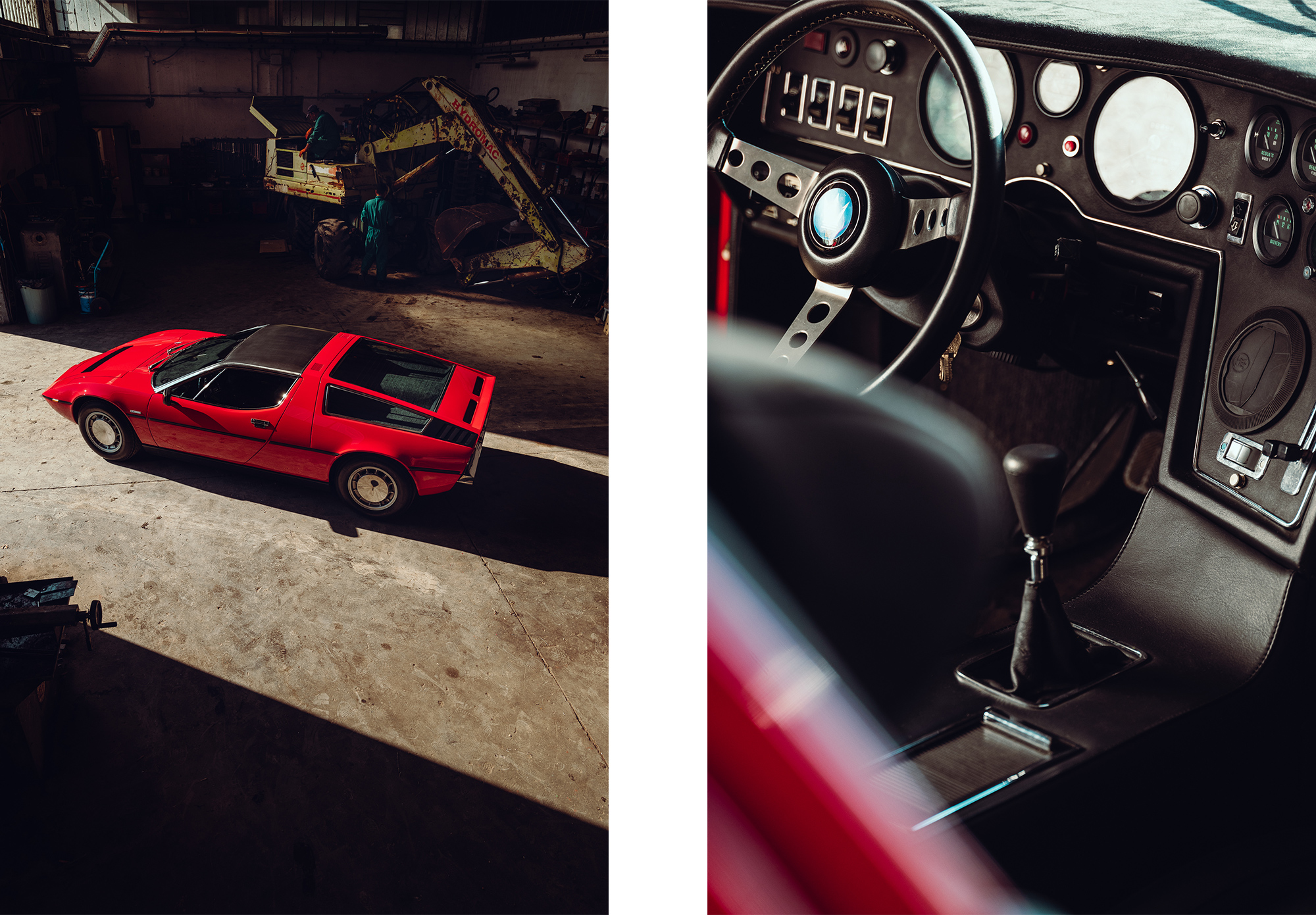 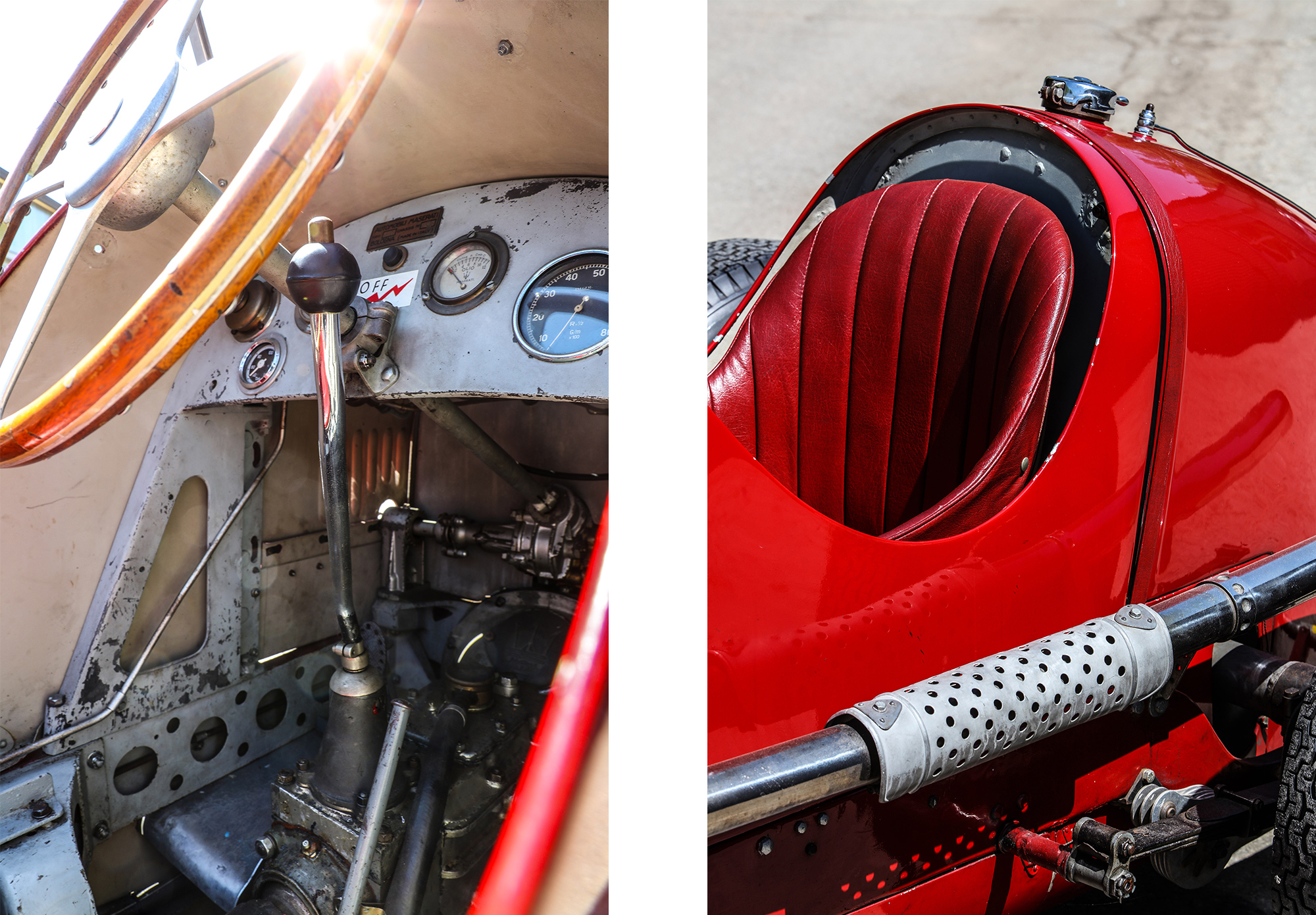 Close-up of the Maserati Tipo 6CM.

A Treasure Trove of a Textile Mill in Florence