Anna Maria Fuzzi rattles off the names of stitches like an elementary school teacher during roll call. “Tubular, Milano, English, ribbed, jacquard, pleated…” The sexagenarian grew up in the maglieria (knitwear factory) her mother founded in 1954 in San Giovanni in Marignano, Italy, and for the past 40 years has made knitwear for the collections of capital-A fashion houses: Jean Paul Gaultier, Prada, and Jil Sander, to name just a few. On the top floor of the factory, in a veritable shrine of success, Fuzzi pulls out notables in an archive of 40,000 garments, including a chenille number Madonna wore during her Virgin Tour in the eighties.

Knitwear is Fuzzi’s life work, and Canada Goose is producing its knitwear collection at Fuzzi’s factory. While the outerwear outfitter produces its down-filled jackets in Canada (representing over 20 per cent of Canadian garment manufacturing), when it came to knitwear, the company followed the expertise. “We have always focused on making best-in-class products,” says Canada Goose president Dani Reiss, “using the highest quality materials and craftsmanship.”

Canada Goose launched its knitwear collection in 2017—“a natural extension,” said Reiss at the time. The company has been executing a vision to become a multiseason brand, adding new products for a range of seasons and climates. Despite having long relied on international distributors, Canada Goose is moving forward with a global retail expansion plan. With new flagship stores open in Toronto and New York, along with international outposts in Beijing, Tokyo, London, Milan, and Paris, it makes sense to expand the product offering and hang additional garments alongside the jackets. “When I started in this business 23 years ago, we had 20 styles,” says Reiss, in Milan for the opening of the company’s boutique in the golden shopping triangle of luxury fashion on Via della Spiga. “As we have grown around the world, we have expanded to well over 200 styles.” Canada Goose now offers parkas, lightweight down jackets, rainwear, windwear, and knitwear. 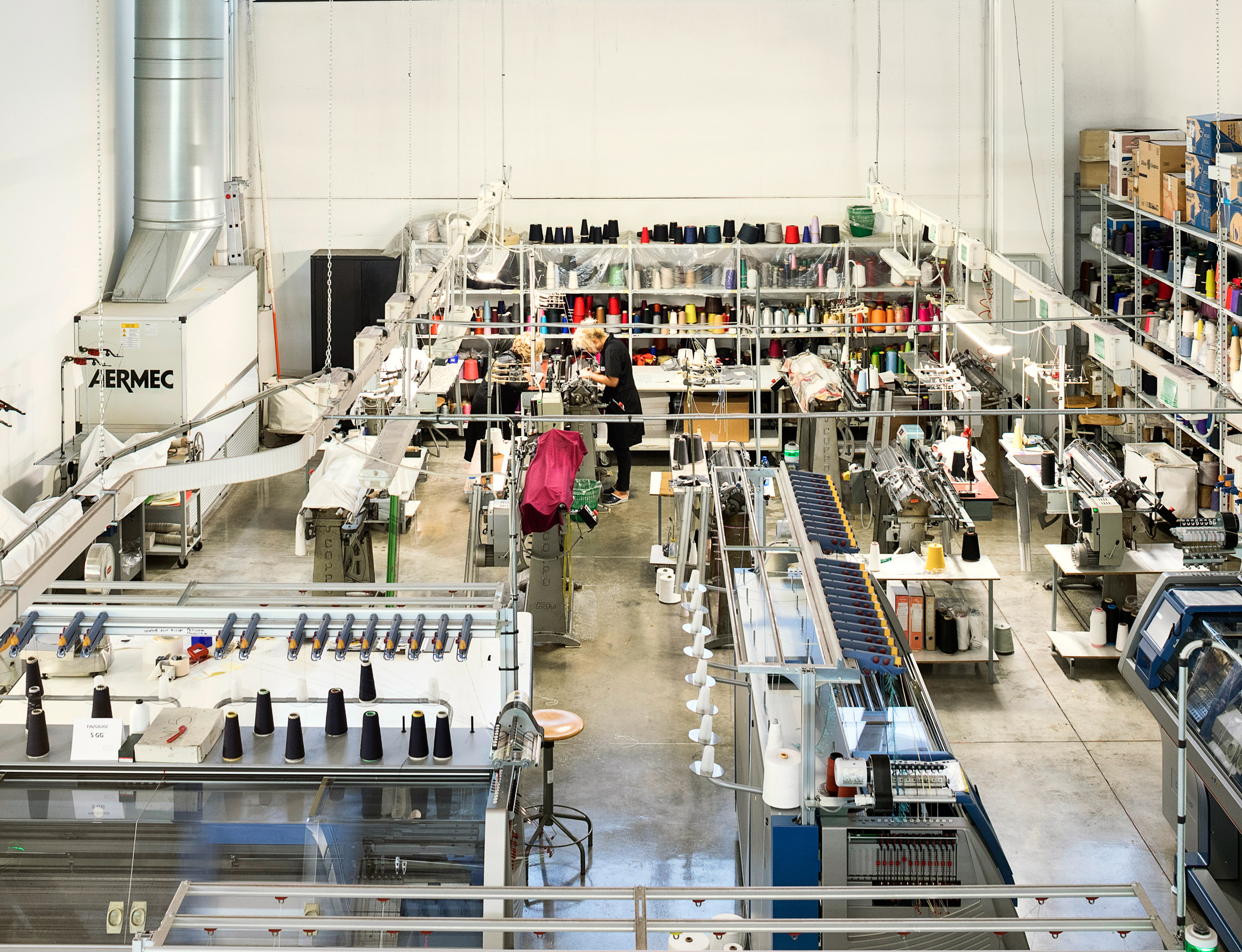 Canada Goose followed the expertise and manufactures its knitwear in Italy, a collection of products for a range of seasons.

The buzz of knitting machines pervades the factory floor where an all-woman labour force is uniformed in white lab coats. “There are many variables to knitwear,” says Fuzzi, “and several techniques. But you are starting from yarn, and it’s about how you use the yarn that makes for the creativity.” On this day, grey yarn from three to 12 microns is threaded on the Stoll knitting machines. “There is a hidden quality in knitwear that you need to take care of—the wearer doesn’t see it, but feels it,” says Fuzzi. “What we refer to as the hidden performance, the craftsmanship.”

The creative crop of Canada Goose knitwear is designed with ultra-fine merino wool in the following categories: mid-weight, heavyweight, HyBridge knit, which bridges the gap between a knit and a jacket with a quilted front of lightweight down and knit back, arms, and collar, and WindBridge knit, a wind-resistant fabric with knitwear. The collection features ethically sourced mulesing-free wool from Argentina, and knits in a variety of styles including hoodies, crewnecks, V-necks, cardigans, bombers, and full-zip sweaters.

A signature of Canada Goose is a proprietary thermal mapping technology that increases air flow and breathability to places on the body that are prone to overheating. In the knitwear collection, an open weave stitch pattern is applied at the neck and under the arms. This past winter, the company debuted Q-Knit, a technique that creates pockets of air between the insulating yarn on the interior and the merino wool exterior, so as to trap heat in areas of the body that benefit from added warmth. 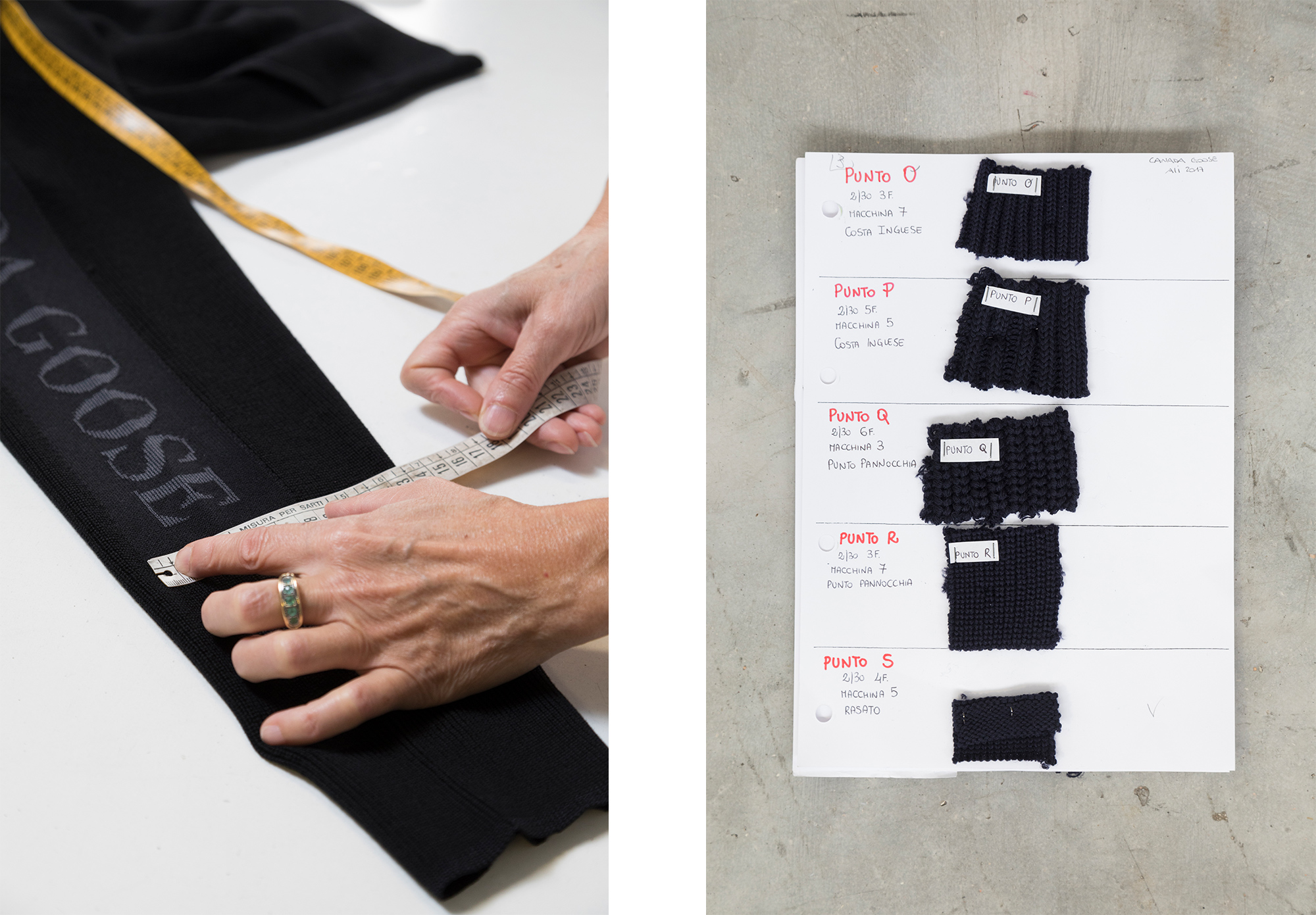 Canada Goose is more popular than ever. How the brand has evolved from functional wear to fashion statement and appeal, to Laurie Skreslet, the first Canadian to summit Mt. Everest, to Rihanna is a massive achievement and testament to Reiss’ governance. “We have a function-first design philosophy,” says Reiss. “Obviously we sell products to the fashion marketplace, but not as a fashion brand, and I think that’s a really important differentiation. That allows us to do things that pure fashion brands don’t.”

As the brand diversifies, it has expanded cautiously, never deviating too far from its core offering. In the 2019 fiscal year, the company reached sales of $830-million, 40 per cent more than in 2018. Canada accounts for 35 per cent of total revenues, the United States 30 per cent, and the rest of the world makes up the remainder. Footwear is the next major step for the company, which acquired winter boot outfitter Baffin (for a reported $32-million) in 2018, but Reiss is in no hurry to get to market. He took several years to ensure the knitwear reads as a logical brand expansion and with Baffin, “we wanted a business that has a reputation for making the best cold-weather boots. We are going to learn from them and eventually make best-in-class footwear.”