Thierry Mugler: Couturissime is the first museum exhibition dedicated to visionary creator Thierry Mugler. On show at the Montreal Museum of Fine Arts from March 2 to September 8, 2019, the showcase features 150 haute couture and prêt-à-porter designs created between 1977 and 2014, highlighting many never-before-seen pieces. This comprehensive exhibit discovers the true artistry within Mugler’s every endeavour. Best known for boundary-breaking styles and legendary fashion shows, his talents span fashion, costuming, perfumery, photography, and filmmaking, as revealed by archival objects and imagery. 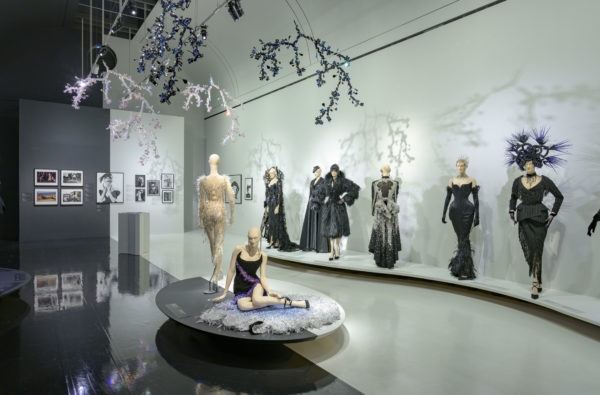 “I enjoy working with living artists and learning about their passions for their work,” says exhibition curator Thierry-Maxime Loriot. “It is a dynamic exchange to have Thierry Mugler’s input because he is an inspiration to many fashion designers … His aesthetic is so distinctive and well conceived that it is almost sacred within the industry.”

Mugler’s futuristic stylings pioneered a niche within fashion history. His earliest emphasized a powerful, exotic take on femininity: structured cuts, architectural shapes, and exaggerated silhouettes. Merging sci-fi and high fashion, Mugler’s attire championed imaginative materials such as metal and fake fur, as well as vinyl and latex. His fashion shows were revered for their theatrics, extending his styles’ otherworldly allure. Costuming proved to be yet another arena where Mugler distinguished himself creatively. Lauded for his inventive approach, he has been commissioned by Beyoncé and Céline Dion, as well as the Comédie-Française, Festival d’Avignon, and Cirque du Soleil. In every project, he reimagines the world around him, uniquely imprinting each with a revelation of himself. 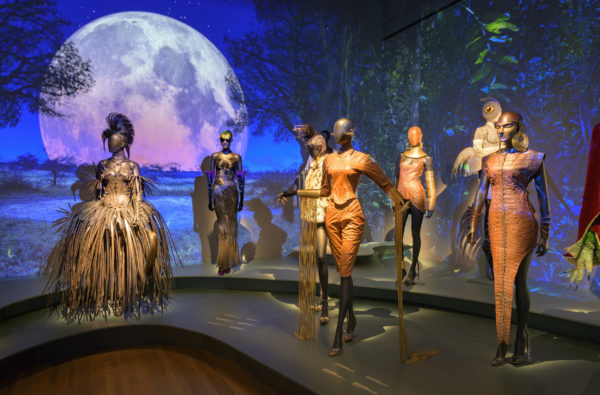 Through his revolutionary vantage point, Mugler set a new standard for the fashion industry and paved the way for style of the grandest imagination. He has the exceptional ability to create faithfully in his own vision, providing an underpinning for contemporary design. The seasoned couturier has been a long-standing inspiration to the avant-garde designers who have followed, such as forward-thinking Rick Owens and the late, renowned Alexander McQueen. Currents of Mugler’s influence are also apparent in the creations of fashion’s celebrated new guard: Viktor & Rolf, Gareth Pugh, and Iris van Herpen. “As in art history, fashion history is important to our present-day understandings,” says Loriot. 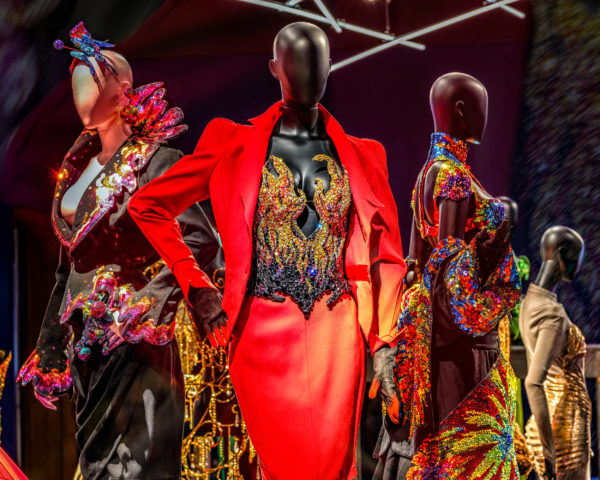 The Couturissime exhibition details how Mugler’s artistic gifts are realized in fashion, displaying a host of iconic and rare designs, accessories, and costumes. Around 100 images from contemporary photography greats will be shown, including works by Richard Avedon, David LaChapelle, and Helmut Newton. These visuals memorialize the fantasy worlds that define Mugler’s aesthetic: PVC and vinyl creations from his Les Insectes collection; a Swarovski-embroidered fishnet “Angel” catsuit; and a silver metal and Plexiglas “Cyborg” bodysuit. Design sketches, clips, and videos complete this presentation. In both his daring stylings and this fashion retrospective, Mugler’s ingenuity and capacity for reinvention seem almost infinite.