When something goes off without a hitch, it’s likely the work of an unsung hero. Sure, we know to be impressed at hundreds of Swarovski crystals stitched into a gown and sculptural skeleton dresses paraded down the runway, but when our everyday garments are infused with luxury, we’re encouraged to pay no attention to those behind the curtain. But peek behind the styles of prêt-à-porter house Marc Cain and you’ll find plenty to marvel at.

From the moment he finished university, Marc Cain’s founder and chairman, Helmut Schlotterer, strove to make his mark on the fashion industry. Branching off from his father’s knitwear business in Bodelshausen, Germany, Schlotterer travelled to knitwear capital Carpi in Italy, to pursue his own business. In 1973, he established Marc Cain, borrowing the name of a Canadian friend, which he thought would be easier to pronounce globally. (The brand is now found worldwide, with eight stand-alone stores in Canada and a new Vancouver location to come this spring.) Before long, the young Schlotterer got word that his father’s company was going under and, in order to save the factory and its employees, he moved his operations to Bodelshausen.

To this day, Marc Cain is based in the same town, but things look a little different. For the first while, the company continued with knits done well, but Schlotterer soon realized he needed to venture beyond this familial niche. In 1975, Karin Veit was brought on as creative director. With her appointment came the company’s expansion into a full wardrobe with now-signature Marc Cain motifs: blouses to trousers, coats to dresses, the design is unbothered yet bold, suited to a fun sophisticate and buoyed by Veit’s love of leopard print.

Equally integral to the brand’s growth was the company’s technological trail-blazing. A textile pioneer of digital printing, Marc Cain’s first machines and systems had to be created specially for the company, and since 2007, the brand has exclusively used special reactive dyes that, when applied with the printing method, permanently bond with the clothing fibre. From 2007 to 2015, the brand invested over 134.3-million euros (approximately $202.7-million Canadian) in research and development, including the construction of all-new production facilities. In 2016, Marc Cain won the Top 100 seal of approval (a German award given to innovative small- and mid-sized enterprises) for what is now arguably its best-known technological advancement: 3-D printed knitwear. 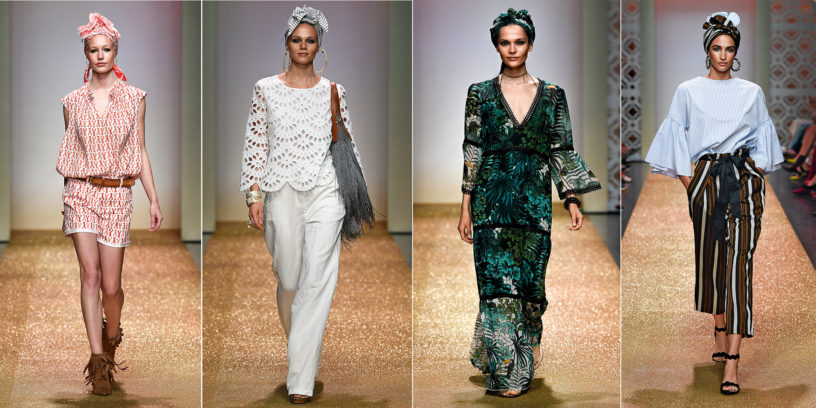 Produced entirely under the roof of the Bodelshausen headquarters, Marc Cain’s 3-D Knit & Wear pieces are the epitome of seamlessness, quite literally. While the yarn harks back to the Schlotterers’ origins, it takes a decidedly 21st-century turn with the way these sweaters, jackets, and skirts are crafted by one of 92 flat knitting machines without a single seam, in one fell swoop—amid over 100 other steps, that is. Each item requires a series of customizations and quality checks—adjusting the pattern and type of each knit, individualized washing and drying processes—with loose threads snipped by hand and, eventually, the garment is finished with a “100% Made in Germany” label.

Meticulous though the production process may be, under Karin Veit’s direction the Marc Cain aesthetic has always exuded a carefree playfulness. In fact, the wearer is even spared the stress of matching. Using Marc Cain’s central Collections label and the casual leisure looks of Sports, Veit developed the Coordinates concept, wherein these pieces can be assembled into an outfit composed of seemingly disparate elements. Pair a metallic leather jacket with a sporty floral techno mesh skirt? Why not? That’s not to mention the sleek Essentials staples, the trendsetting capsule items from Additions (think glam rock sequins, denim in modern colours), and the Bags & Shoes line, many of which bear the faceted face of a familiar feline.

There’s no better opportunity to inspect the minutiae of craftsmanship than with Marc Cain’s spring/summer 2019 collection (photos above). A celebration of botanical patterns, stripes of all shades, and animal prints—including a cheeky lobster or two—this marks Veit’s final collection with the company. As the Marc Cain spirit continues to grow from Veit’s inciting spark over four decades ago, a standing ovation is due to the woman behind the curtain.

The Future of 3-D Fashion