Inside a 48,000-square-foot warehouse in Trenton, Ontario, a two-hour drive northeast of Toronto, blacksmiths are soldering to songs by Thin Lizzy, with additional background noise provided by the whirring of power tools. At first glance, this could be any factory floor, but closer examination reveals something unusual: the metalworkers are creating custom steel armatures that will hold together the fossilized bones of now-extinct life forms, and those tools are air scribes wielded by bone technicians sprawled atop the remains of a 76-million-year-old armoured dinosaur.

“With this one here, we started with a 35,000-pound block of sandstone,” explains Research Casting International (RCI) owner Peter May as he leads me past. A humble master of preserving history, May founded RCI 32 years ago. He’s referring to a very rare fossilized articulated skeleton of Zuul crurivastator; not only is this a brand-new ankylosaurine genus and species, it’s the most complete ankylosaurid specimen ever found in North America. (Yes, those tongue twisters are worthy of a Google search.) RCI freed Zuul from its rocky surroundings for the Royal Ontario Museum’s Zuul: Life of an Armoured Dinosaur exhibition (on display until May 20). 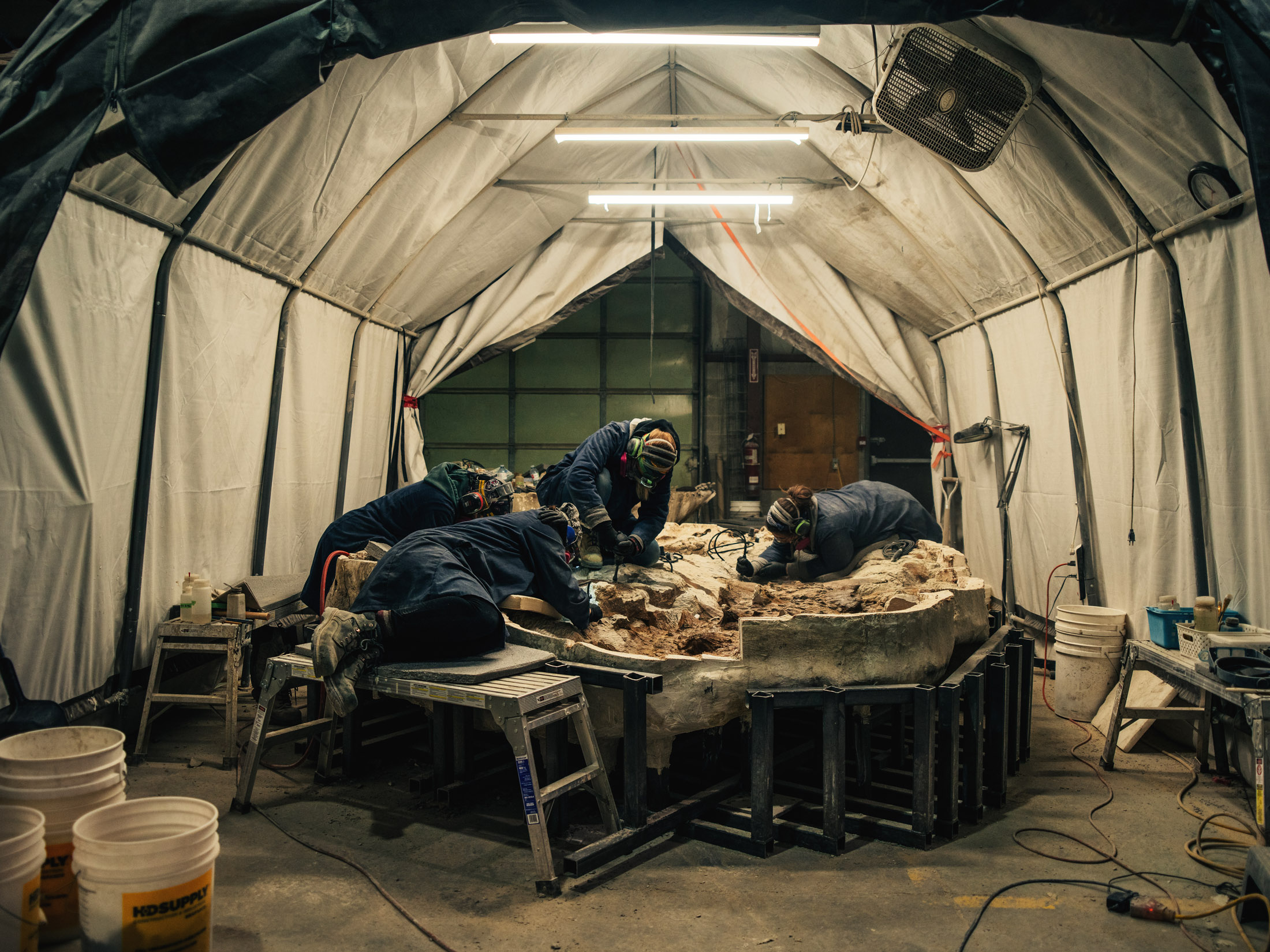 “Zuul is one of the most spectacular specimens of its kind ever found anywhere in the world,” explains May, who lives a half hour away on a farm with his wife. “It’s really exciting.” The ROM’s new skeletal superstar is actively being studied, from its sledgehammer-like tail to the tiny dermal ossicles found in its well-preserved skin impression. “Essentially, it’s a bunch of bone inside the skin. If anything ate it, it would be crunchy. It’s like dermal armour.” May continues, “When preparing the block, we also found a turtle mixed in with all these petrified logs. We think it is the best-preserved turtle of its kind ever found. So that’s kinda cool.”

It’s just another day at RCI, the global authority on the delicate art of dinosaur restoration; to date they have mounted almost 800 skeletons. The team is composed of skilled sculptors, metalworkers, engineers, conservators, preparators, moulding and casting technicians, and display artists. RCI’s work includes preparation of fossils; mounting and positioning complete skeletons; moulding and casting bones—or 3-D printing them—to create life-sized reproductions for museum exhibitions; and dismantling old skeletons to clean, reinforce, and rebuild for future generations. Few challenges daunt the team of professionals. Defleshing a beached whale in order to preserve its bony frame? No problem. Mounting the largest scientifically accurate dinosaur ever discovered? They’ve done it: Patagotitan mayorum, is on display at the American Museum of Natural History in New York. The company even has a sub-brand of sorts called Exploration Playgrounds, which makes archeology-themed playground equipment for kids.

There are only four or five companies globally that do the type of work RCI does, and it is the biggest by far. “It’s easy to come to work every day,” May says. “There’s always something new.” Or old, as it were. He points out the skeleton of a Triassic mega-predator as if it were the most normal thing in the world.

At the Research Casting International facility in Trenton, Ontario, a team of 33 (including Amelia Madill, head of preparation, middle) works on fossil restoration, casting, and mounting.

RCI headquarters is located at the end of a rural road overlooking the Bay of Quinte. To visit—a rare experience in its own right and only possible on infrequent “open studio” days—is to have a perpetually dropped jaw, watching workers chip away at rock to reveal never-before-seen specimens. The company is the brainchild of England-born May, who moved to Canada as a kid and graduated from the University of Guelph with a bachelor’s degree in fine arts and a major in sculpting. One day, he spotted a job posting for a vertebrate paleontological technician at the ROM. He didn’t really understand the dinosaur part of the gig; he did, however, excel at the moulding and casting requirements. “When they hired me, [the ROM] said, ‘Don’t worry about names of animals yet, it will come.’ They wanted someone who could drive a standard vehicle, fix machines, go camping, and make moulds—purely technical,” says May. “I thought I’d died and gone to heaven.” He was 22 years old, and the year was 1977.

A stint collecting fossils in Kansas followed, and May would often work overtime making moulds and casting specimens. On one training trip to England he was introduced to renowned paleontologist Philip Currie, who was building the Royal Tyrrell Museum in Drumheller, Alberta, at the time. Currie offered May a job, and he accepted. It was about five years later, while back working at the ROM, that May received a request from a Japanese museum for a dinosaur mount. With that commission, a lightbulb went off: create a business.

“Everything we had worked on at Tyrrell was high-end stuff, and we got a reputation for doing good work,” recalls May. “At that point, [casting and mounting dinosaurs] was still part-time. I’d get a bunch of friends together with a welding machine and a drill press, we’d rent a space in Toronto and we’d mount a dinosaur, then we’d put it all away until the next call… One day, we just never put anything away.” In 1987, RCI was founded.

“It’s easy to come to work every day,” May says. “There’s always something new.” 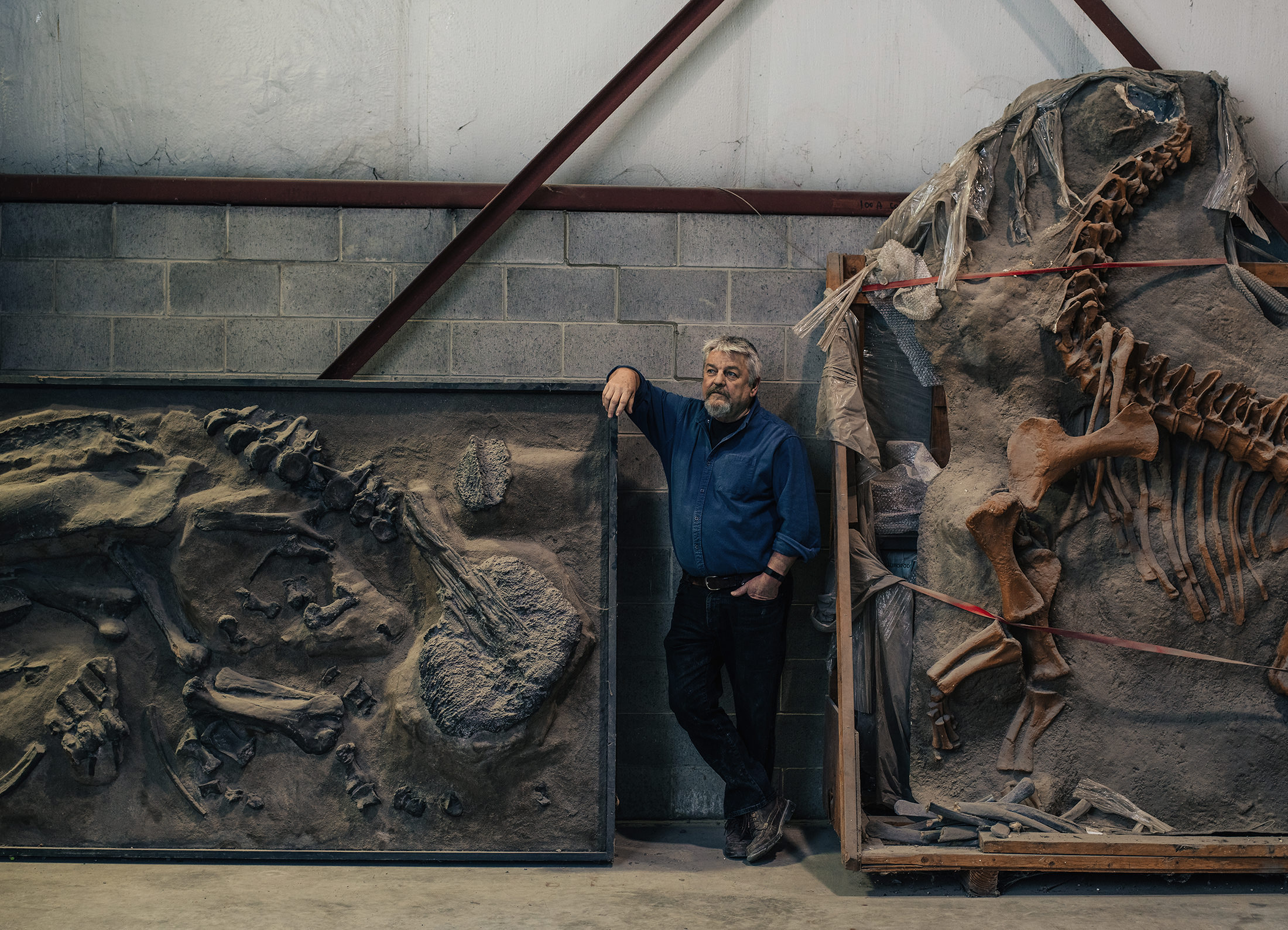 Peter May with casts of an ankylosaur bonebed (left) and a camarasaurus (right) at his Research Casting International facility.

These days, the company’s reputation is so solid that most major museums in the world contain RCI’s work. London’s Natural History Museum came calling a few years ago to intensively restore its 25-metre-long blue whale skeleton, named Hope, as part of a £12-million ($21-million Canadian) museum revamp. It currently resides in the enormous Hintze Hall, where it replaced a beloved diplodocus, Dippy, which also received a full skeleton remount before embarking on a multiyear tour of the U.K. RCI has private clients, too, such as companies like Google—they commissioned a dinosaur mount for their new headquarters in Mountain View, California—and individual buyers. One Montana customer had a bronze T. rex installed beside a trout stream on his ranch.

Recently, RCI finished installing a five-year project consisting of 48 specimens for the Smithsonian’s new David H. Koch Hall of Fossils—Deep Time, slated to open June 8. “When we do an overhaul like the Smithsonian, we dismantle and clean the existing exhibitions, go through bone by bone, and make sure all the joints are stable. Then we’ll put steel armature on it so it will be good for another 100 years at least, and use modern adhesives. Unlike the shellacs and horse glue they used in the past, these won’t harm the bone.” The fragile installation and positioning of all the pieces in situ is an incredible feat in its own right. (As RCI production manager Matt Fair noted when he was interviewed by The Atlantic on site, “I’ve dealt with some stuff where if you breathe on it, it cracks.”)

Every handler has an intuitive understanding of the specimens they’re working with—the strength of the bones, the way they can be positioned when mounted. RCI’s 33-member team includes May’s three grown-up kids: Jacqueline, who is studying the blue whale genome; Amelia, who led the preparation of Zuul; and son Alex, who is developing new casting materials with organic bases such as mushrooms.

In a field with such scientific importance, reputation is everything. Indeed, there is only one major break on RCI’s spotless record and it was done deliberately, in the name of Hollywood. In the early 1990s, when May heard that Steven Spielberg was making a film version of Michael Crichton’s Jurassic Park, he contacted the team and offered his services. That resulted in RCI building two sets of T. rex and alamosaurus skeletons for the 1993 feature film, with one of the pairs designed to be blown up. “It’s the only skeleton we ever had crash,” May says. “I was on set that day. It was incredible to watch.”

Just as digitized dinosaurs have appeared in subsequent Jurassic Park films, innovation extends to May’s work as well. Advancements in 3-D printing and scanning will likely replace skeleton moulding and casting one day. Even the hands-on work of preparing fossils could well become automated down the road. This would help with the backlog of specimens that most major museums have collected in their basements.

To imagine hundreds of fossils trapped within blocks of stone prompts a question: why? Time and money are the main reasons, museum curation is another. “When I came back from Alberta, the head of the vertebrate paleontology department at the ROM was really into ichthyosaurs—you know, those ones that look like a dolphin?” says May. “So, we collected a whole pile of ichthyosaurs, but then he retired before we had a chance to prepare everything. Dave Evans, who’s there now, is really into dinosaurs, but not ichthyosaurs. So, we have a bunch of them just sitting down there in blocks in the basement.”

David Evans, curator of dinosaurs at the Royal Ontario Museum, confirms that his own particular interests lie in plant-eaters, and the twilight age of the dinosaurs—understanding how their ecosystems changed leading up to the extinction event 66 million years ago. He also notes that the ROM fossil collection dates to the early 1900s. “We have a backlog of about 100 years in terms of preparation,” he says. “But the best and most scientifically important specimens have always been prioritized, so it’s not as bad as it sounds.” 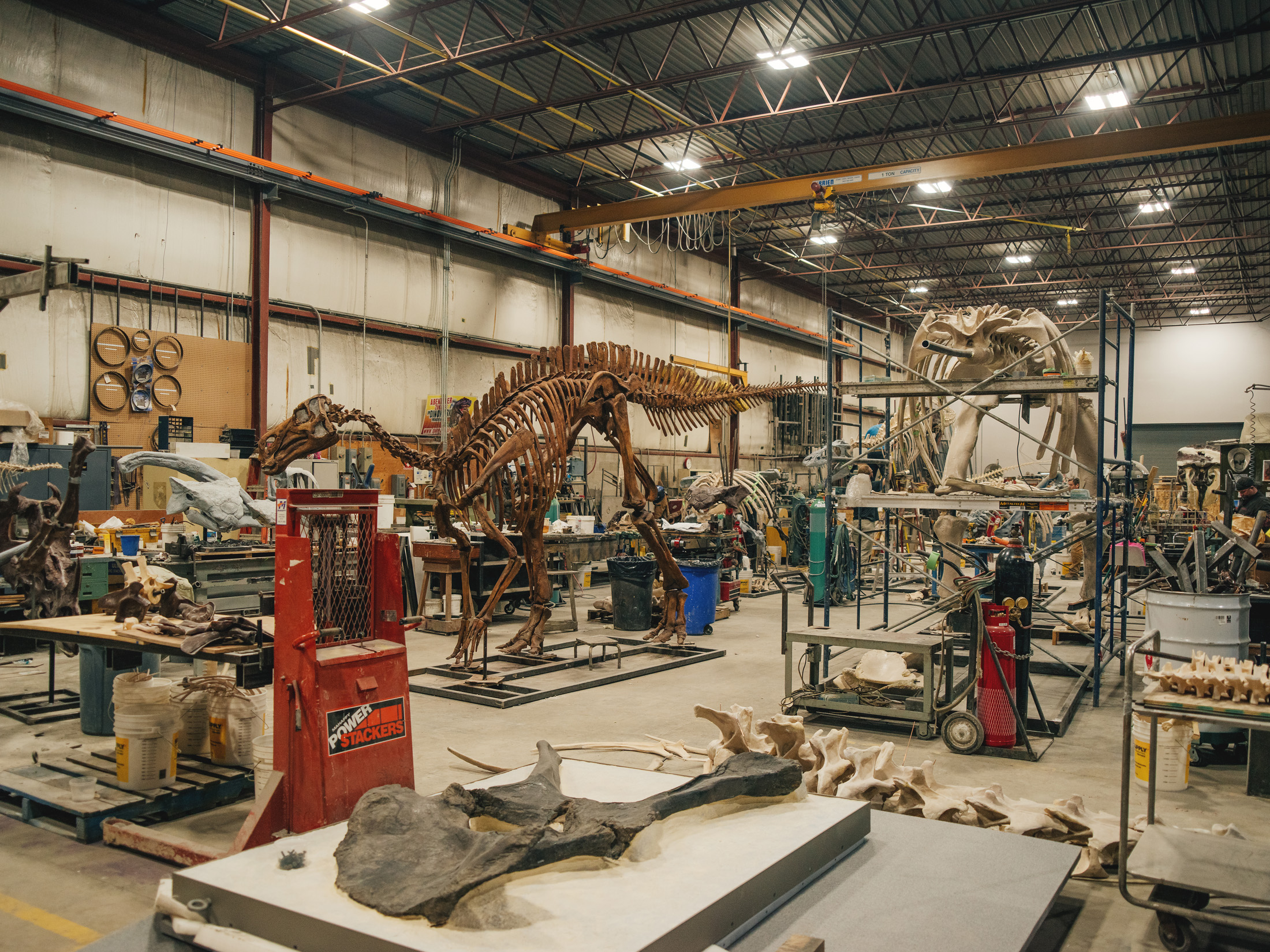 Like May, Evans does not hide his enthusiasm for the Zuul discovery. “The quality of preservation of the bony armour, even with the external skin preserved, has been beyond our wildest dreams.” On working with RCI, Evans attests that May’s prior experience working for museums is a huge advantage in that he understands how things work from both the scientific and gallery perspectives. “Peter’s dedication to working with museum scientists to get the skeleton mounts to be as accurate as possible sets RCI apart from other companies.”

As humans, we crave an understanding of our place in the world, and studying the past yields the biggest clues. The pieces of the puzzle that RCI uncovers are key for this prodigious task. When asked about the purpose of his work, Peter May stops to think. “Trying to show the evolution of life through time,” he says, going on to explain that by revealing and studying extinct species, perhaps we can help to understand the sixth extinction we humans are causing.

“I was just reading an article that said for a megamammal to come back in the world, it takes at least 5 to 6 million years to evolve. So, if all the elephants go, and all the rhinos go, that is the time it takes for them to evolve again, from small to large,” explains May. “But the thing is, with us humans around, that’s never going to happen—we’re never going to see that. Sure, there are stories of hope. Like when the elk went extinct in Ontario, and then were reintroduced, and now there are herds of elk. But it’s all about humans controlling the environment. I think that is the future of the world. Unless we manage to wipe ourselves out first.”