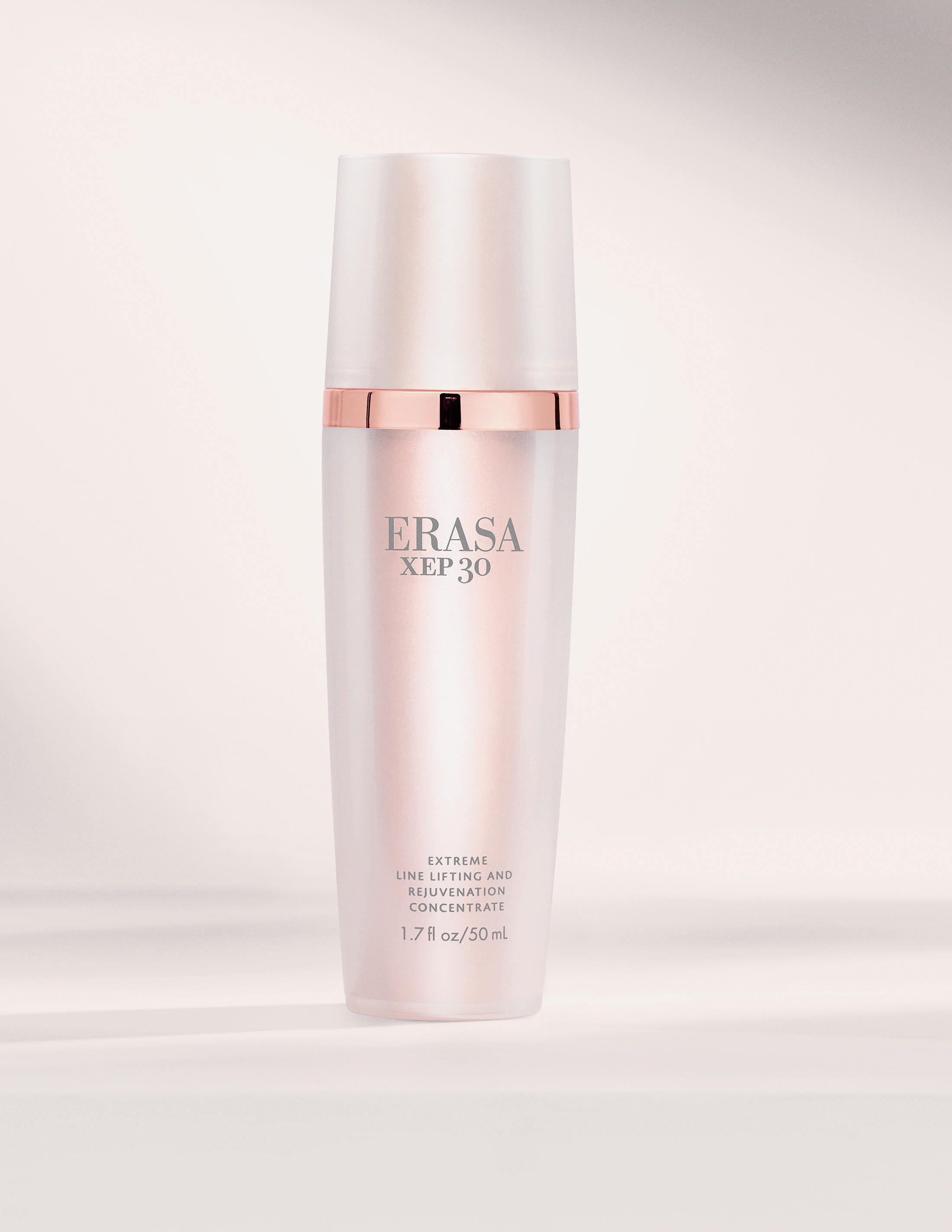 The beauty industry is constantly releasing new products, and the script for each tends to be the same: the company’s marketing department touts the efficacy of the new star product, a celebrity-studded event is held to fete the product, and the brand ambassador gushes to the media about how great said product is. There is a series of posts about these events on social media that have you feeling “I wish I was there,” followed by a campaign rollout in stores and online. Day cream, night cream, colour collection—different products, same playbook.

And then Erasa came along, a relatively unknown beauty brand with a relatively known beauty insider as its creator. Prior to co-founding Erasa, Julius Zecchino was the head of skin care R&D at Estée Lauder for two decades. When Erasa XEP-30 was launched in 2015, the product flew under the radar; there was no expensive launch of marketing and distribution, the money put into research instead. And then a certain supermodel made a sensational claim, and Erasa went from zero to hero.

Linda Evangelista is on record as saying that daily use of Erasa XEP-30 caused her to cancel her Botox treatments. “I couldn’t believe what I saw,” says the 53-year-old supermodel, who was introduced to Erasa by her aesthetician Georgia Louise. “My skin did a complete turnaround.” Erasa XEP-30 is a skin-care concentrate that is clinically proven to help erase visible signs of aging—for those wanting to smooth deep frown lines and crow’s feet, an injection is no longer the only option.

“I get so many products to try,” confesses Evangelista. “I brought it [Erasa] home and put it on my bedside table thinking, ‘I’ll look it up later and see what it’s about,’ ” says the native of St. Catharines, Ontario, during her first visit to Vancouver. Time passed. One night, too tired to go through a beauty routine of “26 steps, I put some [Erasa] on. And on the second week, when I went to tweeze my eyebrows in the magnifying mirror, I noticed something.” Evangelista—a self-proclaimed “beauty junkie” who has been battling melasma for years—says that while “most people love Erasa because of what it does for wrinkles, I noticed that my melasma got better.”

The model, who was once famously misquoted as saying she didn’t get out of bed for less than $10,000, wanted to meet the people behind Erasa, not because she was being paid, but because she actually believed in the product. And now, Evangelista finds herself back on the beauty scene—this time as vice-president and creative director of Erasa.

So, what’s in this anti-aging elixir? XEP-30 is the name of a patented neuropeptide, a synthetic version of a snail neurotoxin, similar to what is in Botox. Niacinamide (a form of vitamin B3) improves texture, and glabridin is an anti-inflammatory ingredient that comes from licorice root extract. Overall, Erasa XEP-30 brightens skin, improves elasticity, stimulates cell rejuvenation, and reduces discoloration. For now, Erasa is a one-product skin-care brand (available in Canada exclusively at Holt Renfrew), but “we have so many products in the making,” confirms Evangelista. A moisturizer will be the next Erasa product to market, but there is no specific time frame for its release. Evangelista is actively involved in all phases of product development and testing, and she goes to the Erasa lab, located in New Jersey, once a week. “I am learning as we go,” she says, but the team isn’t always in agreement. “For lips, I like sticky and nobody likes sticky. So we’re battling about stuff like that…” And for those who may be asking if Evangelista is qualified to do the job, she has a response: “I am very opinionated, and I am very vain. And I think I can relate to what women want.”

Two pumps of the Erasa XEP-30 is all you need—warm it up in your hands and apply it to the forehead, eyes, and laugh lines followed by the rest of the face, morning and night. And when you’re trying with all your might to get that last pump, know that Evangelista feels your pain. “I have never finished a beauty product in my life before,” she says. “I thought the pump was broken.” Now, wherever she goes, she always has a case of Erasa XEP-30 bottles in tow.