As Bianca Sharma walks the hallowed halls of Monastero Santa Rosa her eyes dart around, fixating on an oversized tome on display. The corridors are sparsely decorated with historical elements and antiques; a confessional and pews hint at the property’s religious past. She turns a page full of writing to one with an image, a visual of an intricate tapestry. “We live in a world of imagery,” says the 58-year-old American. Sharma has passionately restored the former 17th-century monastery in the under-the-radar village of Conca dei Marini (mid-way between Positano and Amalfi), giving it a new life as a remarkable 20-key hotel. 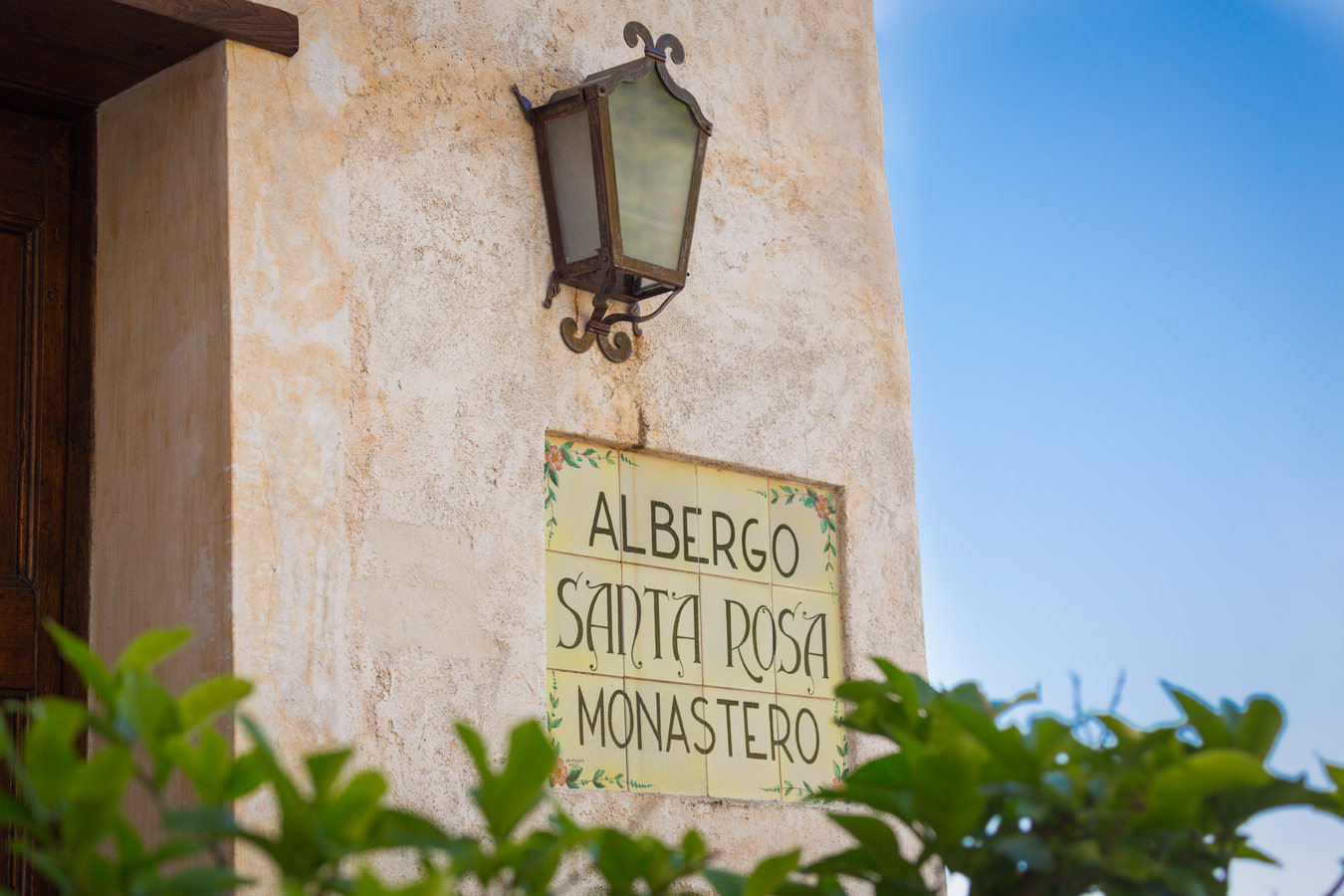 Monastero Santa Rosa was an 11-year renovation project. The resulting hotel and spa are a delicate blend of past meets present, the right balance of seclusion without solitude.

The Amalfi Coast is no stranger to visitors. Perched high above the main road, on a dramatic cliff above the Gulf of Salerno, Monastero Santa Rosa is free of the frenzy you find along Amalfi’s central artery. The resplendent retreat cascades down the hillside, which is void of other development on either side, guaranteeing uninterrupted views of the coast and the sea. Sharma spotted the abandoned monastery while boating the Mediterranean coastline and purchased the property within days. “It possessed me,” she says of her impulsive purchase. She then spent 11 years completing the painstaking renovation (the property sat idle for two and a half years, tangled in the bureaucracy of Italy). The resulting hotel and spa, open from April through November, are a delicate blend of past meets present, the right balance of seclusion without solitude, a new hotel that has atmosphere and history. 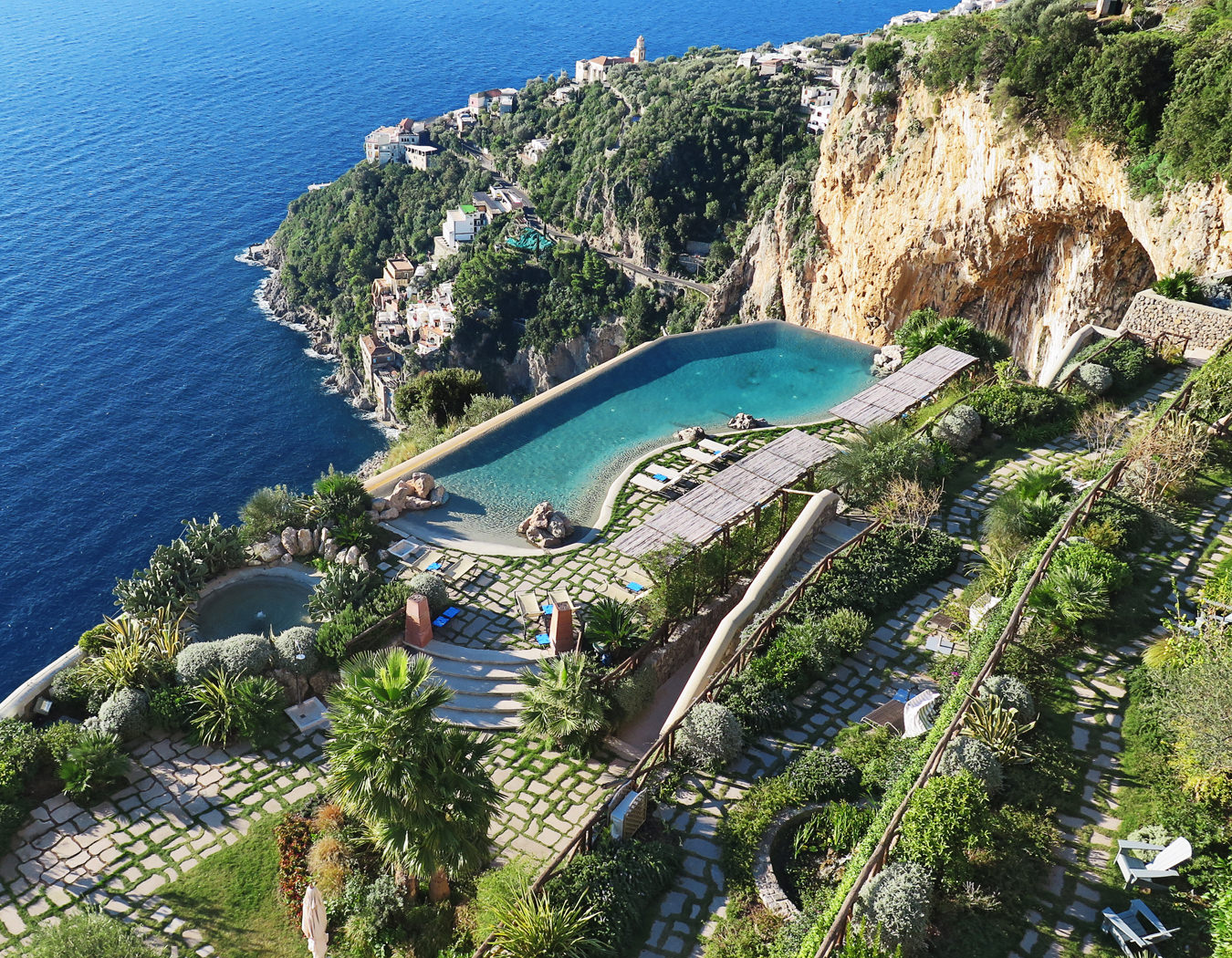 A cascade of cantilevered gardens flows into an infinity pool set 200 metres above the sea.

The accommodations are compact (remember, nuns lived here) yet luxurious, with the feel of a genteel Italian residence. Wooden antiques, handpicked by Sharma, are displayed in front of bare walls with beige tones, and prayer benches serve as nightstands. Even the bathrooms have a view of the breathtaking coastline. Each room is named after a local herb, as the nuns who resided there were known for creating holistic remedies with supplies from their garden. “I didn’t work on a budget,” says Sharma of her handsome investment. She isn’t boasting, but is giving a plausible explanation of why Monastero Santa Rosa feels so right. “There is no balance sheet on which this project would make [financial] sense.”

The resplendent retreat cascades down the hillside, which is void of other development on either side, guaranteeing uninterrupted views of the coast and the sea.

Unlike many hoteliers, Sharma didn’t come from a hospitality background. Instead, her vision for Monastero Santa Rosa came entirely from her own experience. “I didn’t want to lose the integrity of the structure, with its simplicity and spirituality,” she says of the original monastery and grounds. Sharma worked closely with architect Francesco Avolio de Martino, and much of the monastery’s structure, from the stone exterior to the vaulted ceilings, has been preserved. 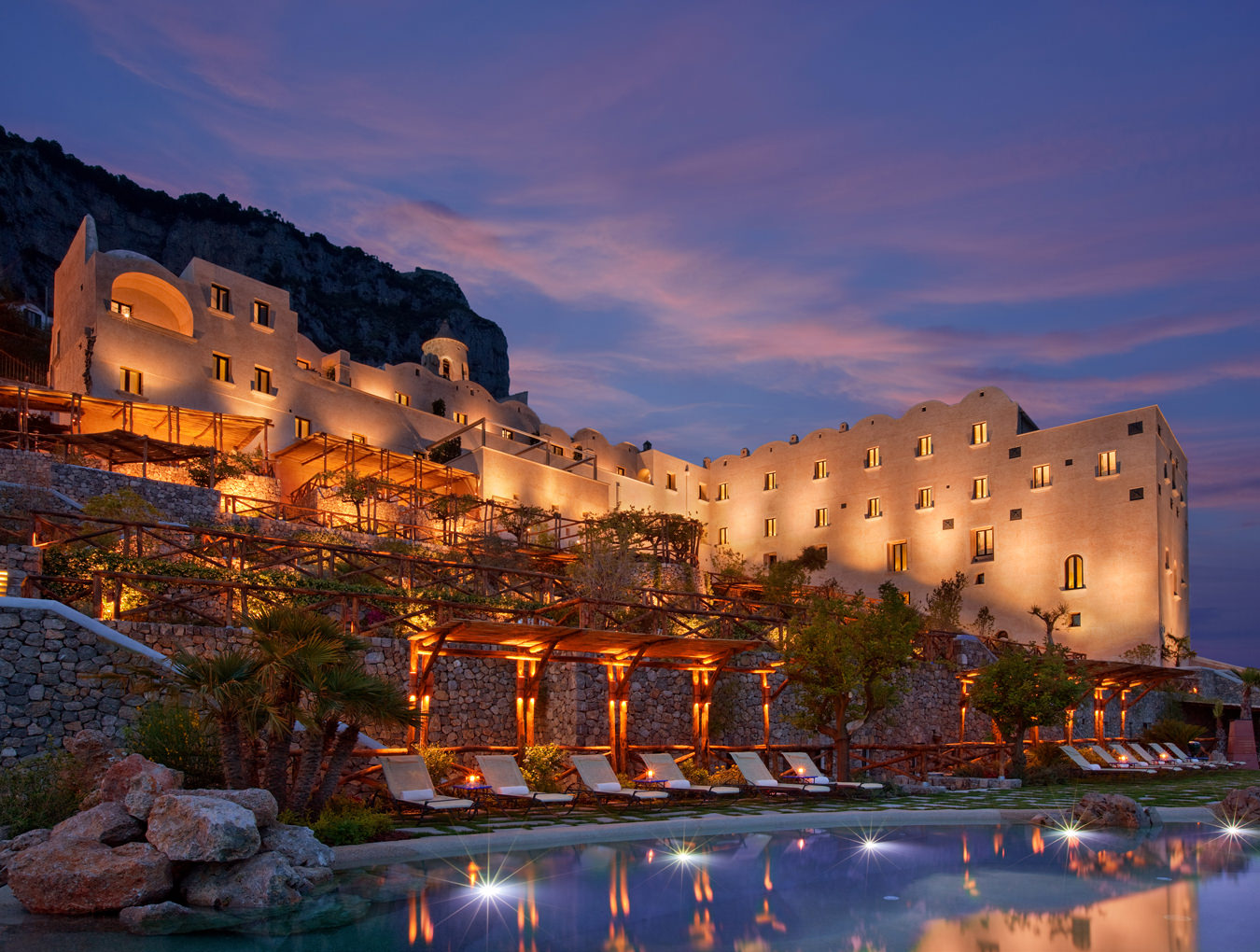 A cascade of cantilevered gardens flows into a beautiful infinity pool set 200 metres above the sea. The gardens, designed in the tradition of an Italian estate, boast four levels of flora. It’s impressive how the expansiveness, lush landscaping, plentiful lounge chairs, and canopied daybeds serve just 20 rooms. There is a calculated silence at Monastero Santa Rosa, with quiet moments at every turn.

“Signora Bianca,” as she is called by the Amalfians, is held in high esteem by the townspeople. “She has done plenty of good for the coast,” says a proud Neapolitan, one of the locals Sharma calls upon if guests are interested in hiking the nearby Valle delle Ferriere natural reserve trail. “We matter to her.” The Monastero Santa Rosa staff, from the major-domo chiming the monastery bell marking your arrival, to the waiter asking your water preference at mealtime, to the housekeeping staff you never see, to the crew at the cavernous spa that fills the sisters’ former winery—it’s service from the heart. The people care for you like family. Flavourful, unprecious food that is truly authentic Italian cuisine is what you can expect from chef Christoph Bob. The monastery is the birthplace of sfogliatella, a shell-shaped dainty filled with ricotta and lemon or orange zest that’s named for its layers of paper-thin pastry.

After days of delighting in the sacred grounds, expect an invitation to confess yourself by way of written feedback for the hotel. My confession: In the name of the Father, the Son, and the Holy Spirit, Heaven on Earth has been found at Monastero Santa Rosa. 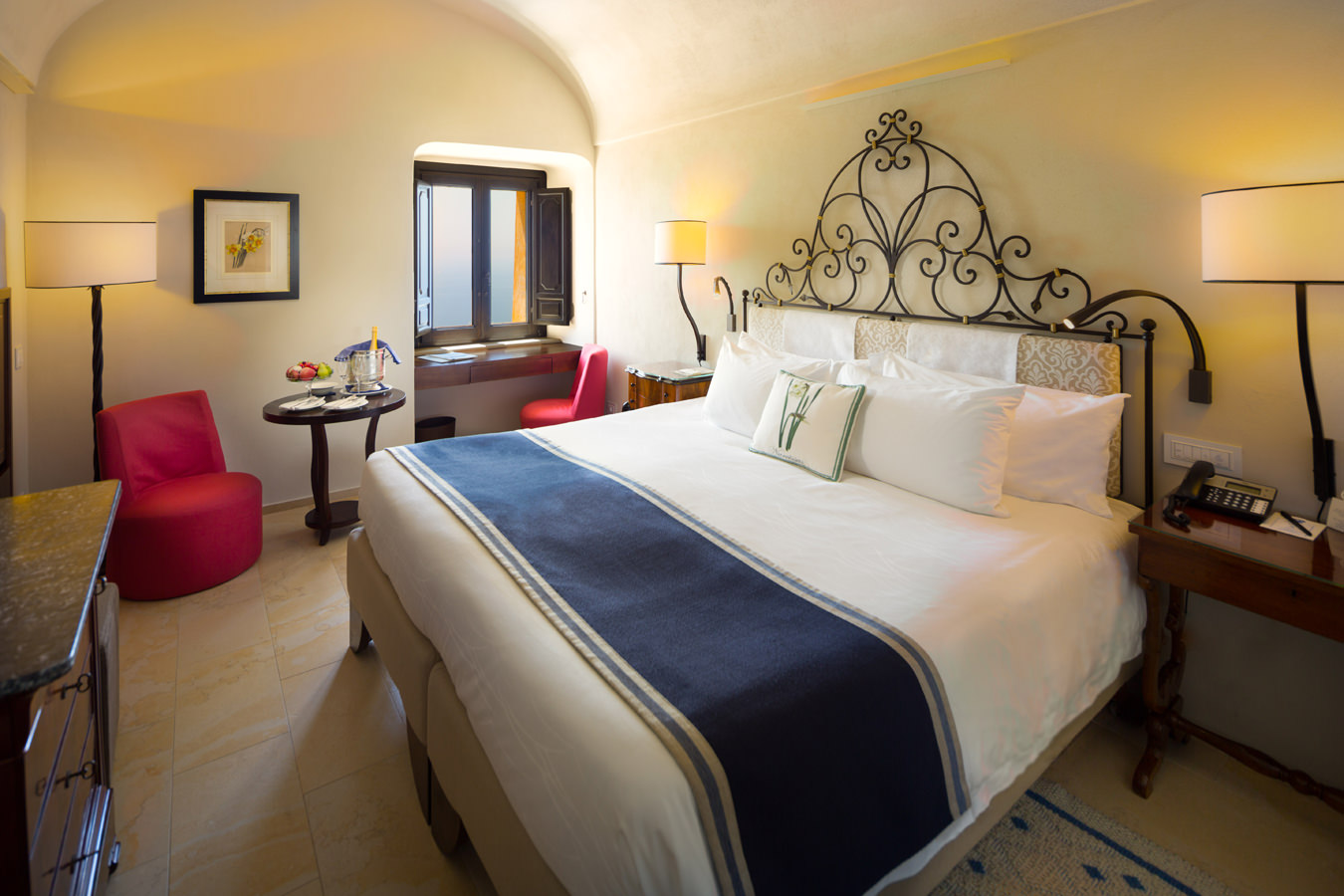 The accommodations at Monastero Santa Rosa are compact yet luxurious, with the feel of a genteel Italian residence. 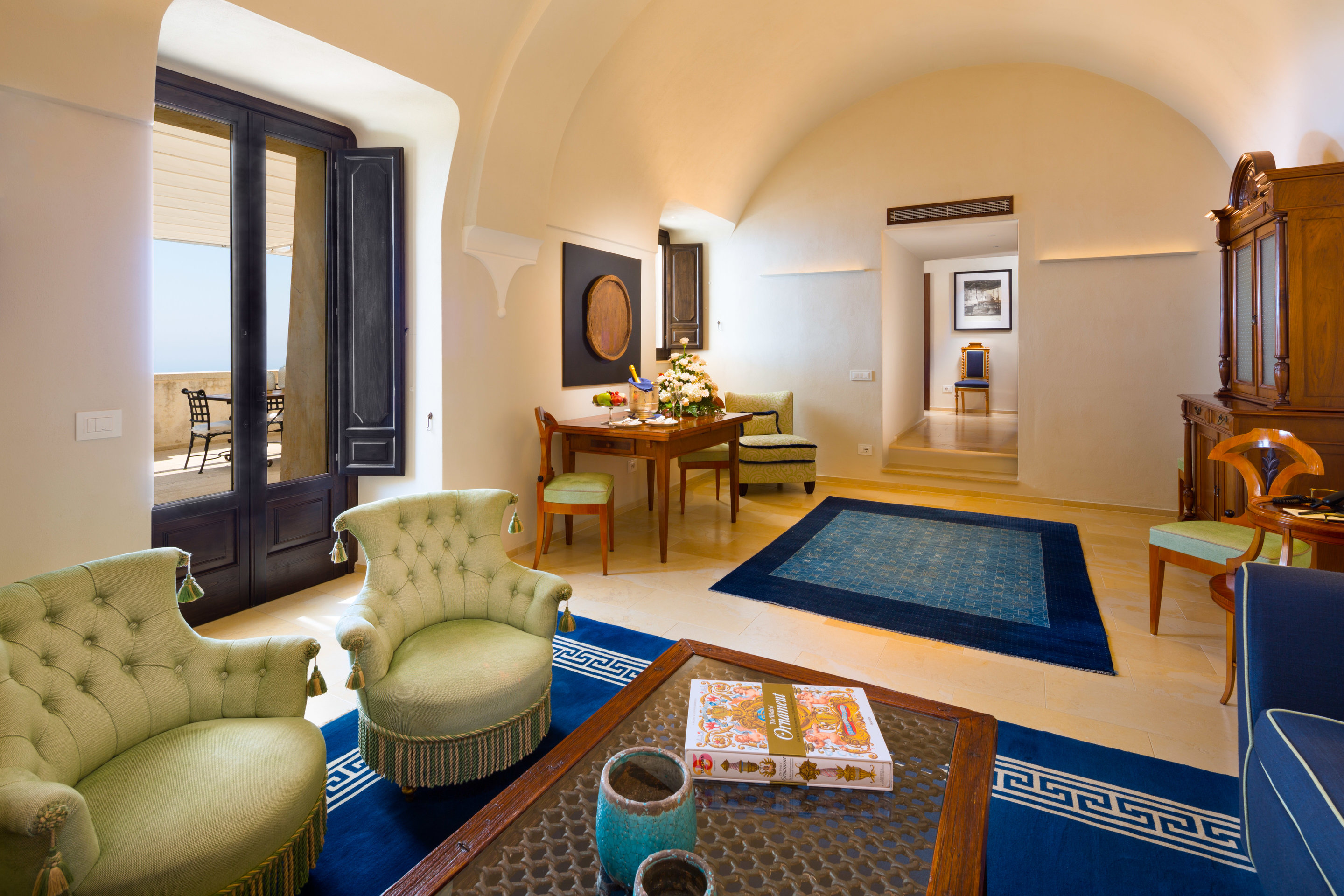 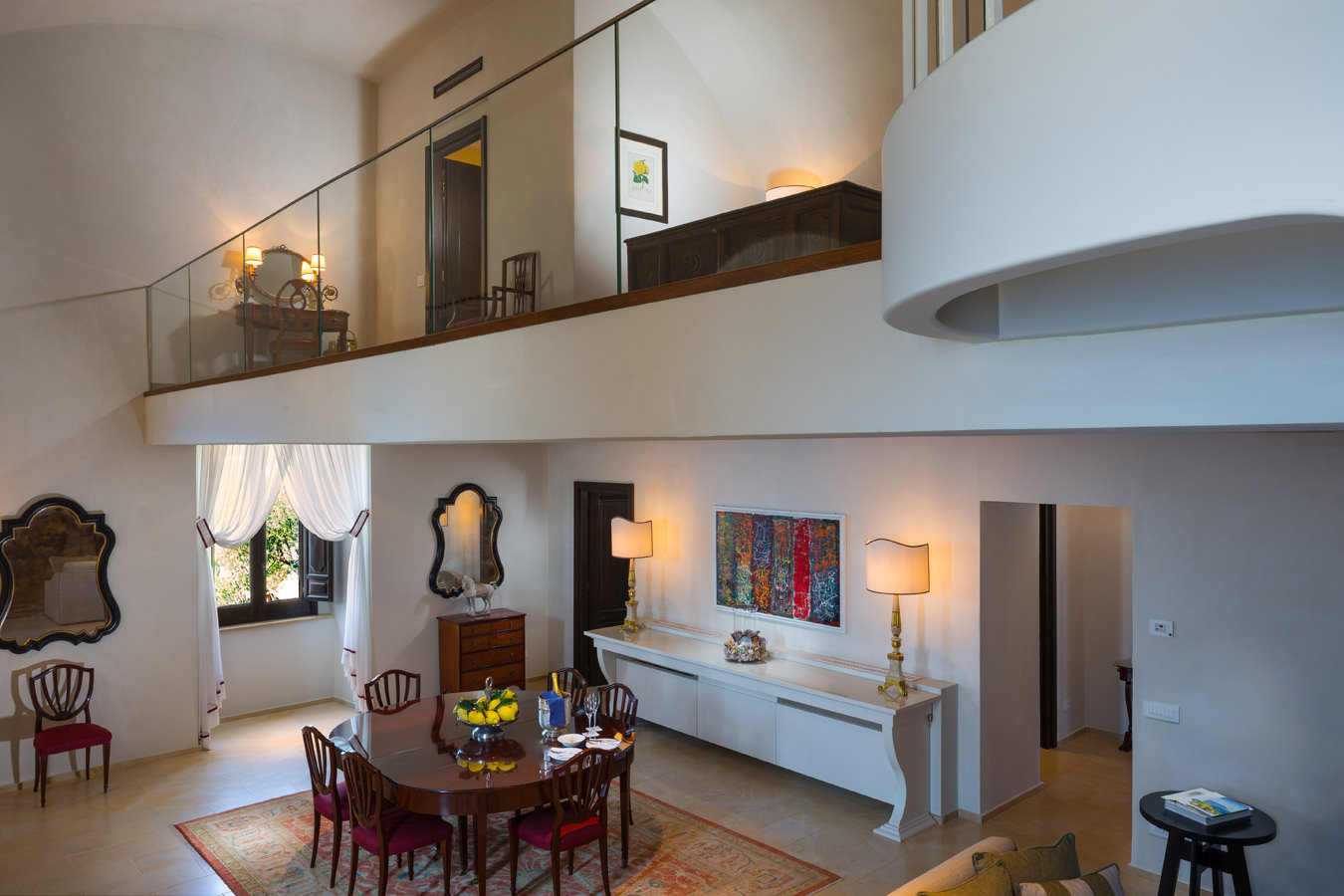 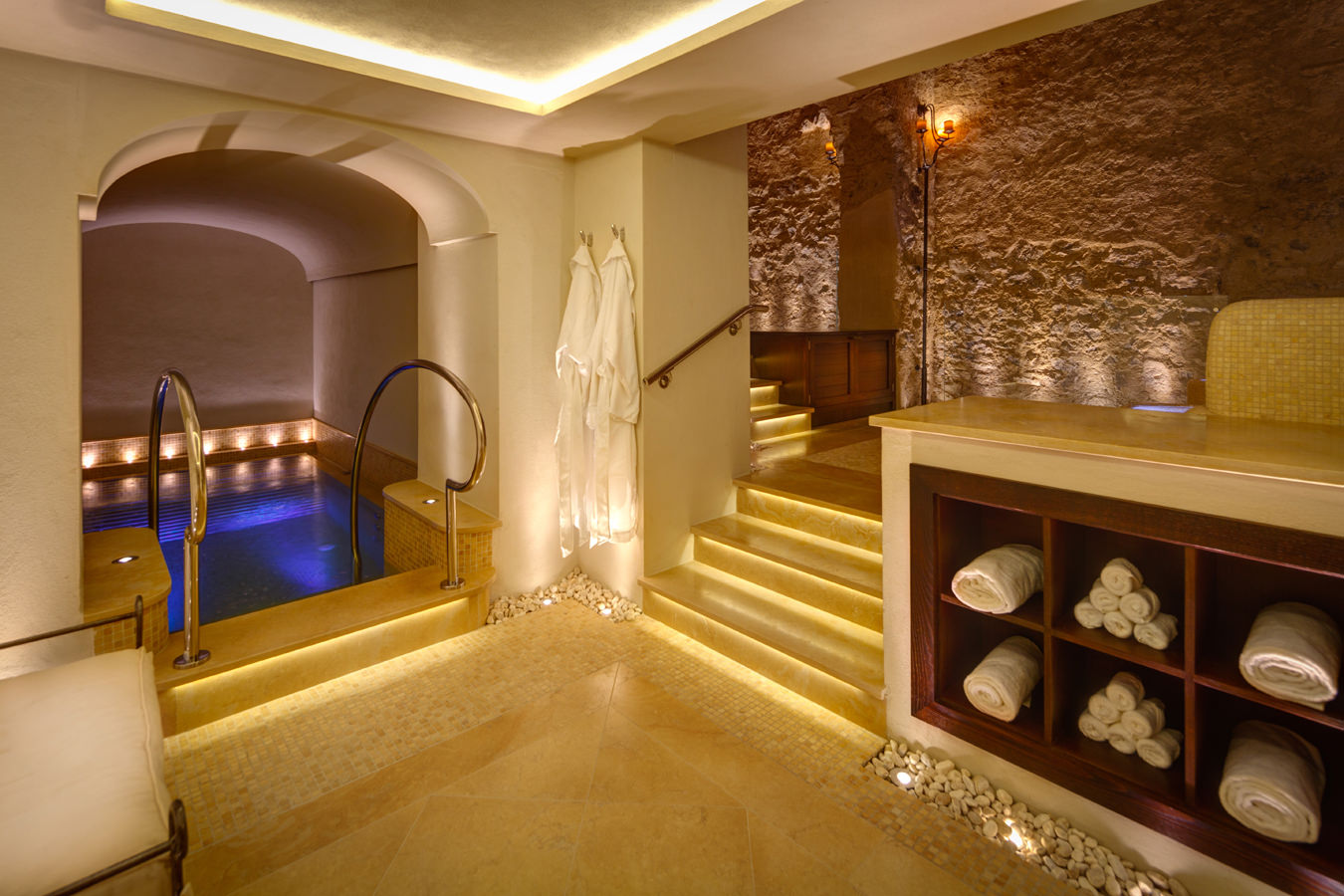 The Spa at Monastero Santa Rosa is a destination in its own right with a heated hydrotherapy pool.