A thin strip of European-sized single-lane road cuts through the pastoral green hills of Bavaria south of Munich. Behind the wheel of the newly refreshed Porsche Panamera, I became keenly aware of two things. First, this German sports sedan is capable of quickly devouring any road you can find and, second, I had just driven through a well-placed speed trap at a pace that was unlikely to please the local Polizei.

Like the previous generation, the all-new 2017 Panamera is offered in several versions for North America, from the base Panamera 4, to the Panamera 4S, the Panamera Turbo, and the plug-in Panamera 4 E-Hybrid. Each iteration features all-wheel drive and comes fitted with a new eight-speed version of Porsche’s PDK dual clutch transmission. Priced from $102,500 for the 330-horsepower V6 Panamera 4, the $114,300 4S features a new twin turbo 440-horsepower V6 offering a considerable step up in performance. The Turbo, which starts at $167,700, turns gasoline into smiles via a 4-litre twin turbo V8 that makes a range-topping 550 horsepower and 567 lb-ft of torque. The future-forward E-Hybrid is no slouch either, blending a 2.9-litre V6 with an electric motor for a combined output of 462 horsepower and 516 lb-ft of torque, and the ability to travel up to 50 kilometres on electricity alone. For those who prefer to be chauffeured, all four versions of the Panamera can be optioned as Executive models, with an additional 15 centimetres of wheelbase to offer a more expansive rear seat experience.

I drove the 4S and the Turbo back to back and both versions of the Panamera are very, very fast, but the Turbo turns up the volume and pushes noticeably harder through each gear. With a rousing wave of torque forming around 2,000 rpm, the Turbo can manage 0 to 100 km/h in just 3.8 seconds while the 4S finds 100 km/h in 4.4 seconds with an eventual top speed of 289 km/h. Despite it being a bit of a cliché to deride the proportions of the original Panamera, this new generation is a more successful expression of Porsche’s styling sensibilites. With an overall design that appears to have effectively mixed the roofline and tail of the 911 with the nose of the Mission E concept, the 2017 Panamera is taller and wider, but is powerful, taut, and undeniably athletic, especially in Turbo guise. To its credit, the new shape is more Carrera than Cayenne, and the design better expresses both the Panamera’s sporting intent and its luxury badge.

The interior is an eye-catching mix of technology and signature Porsche lines, mixing expanses of leather with glass-like touch surfaces and a massive 12.3-inch central multimedia infotainment display. While the instrument cluster uses the iconic Porsche five-gauge layout, only the centre tachometer is a true analogue gauge. The “gauges” on either side are in fact high-resolution screens that can be customized to show a variety of information, from navigation to multimedia and vehicle monitoring.

This German sports sedan is capable of quickly devouring any road you can find.

It’s no surprise that Porsche has created a standout interior for its latest Panamera. Despite the vehicle’s nearly endless list of technology and creature comforts, I found the user experience to be straightforward and surprisingly intuitive. Creating an advanced infotainment system that looks good is one thing. Making it usable is an entirely different matter. Sure, the menus within the multimedia system have a learning curve, but most settings and functions can be found with minimal effort and the interface is, thankfully, lag-free. With a mix of touch surfaces and physical buttons, those seated in both the front and back seats have quick access to a wide array of controls. 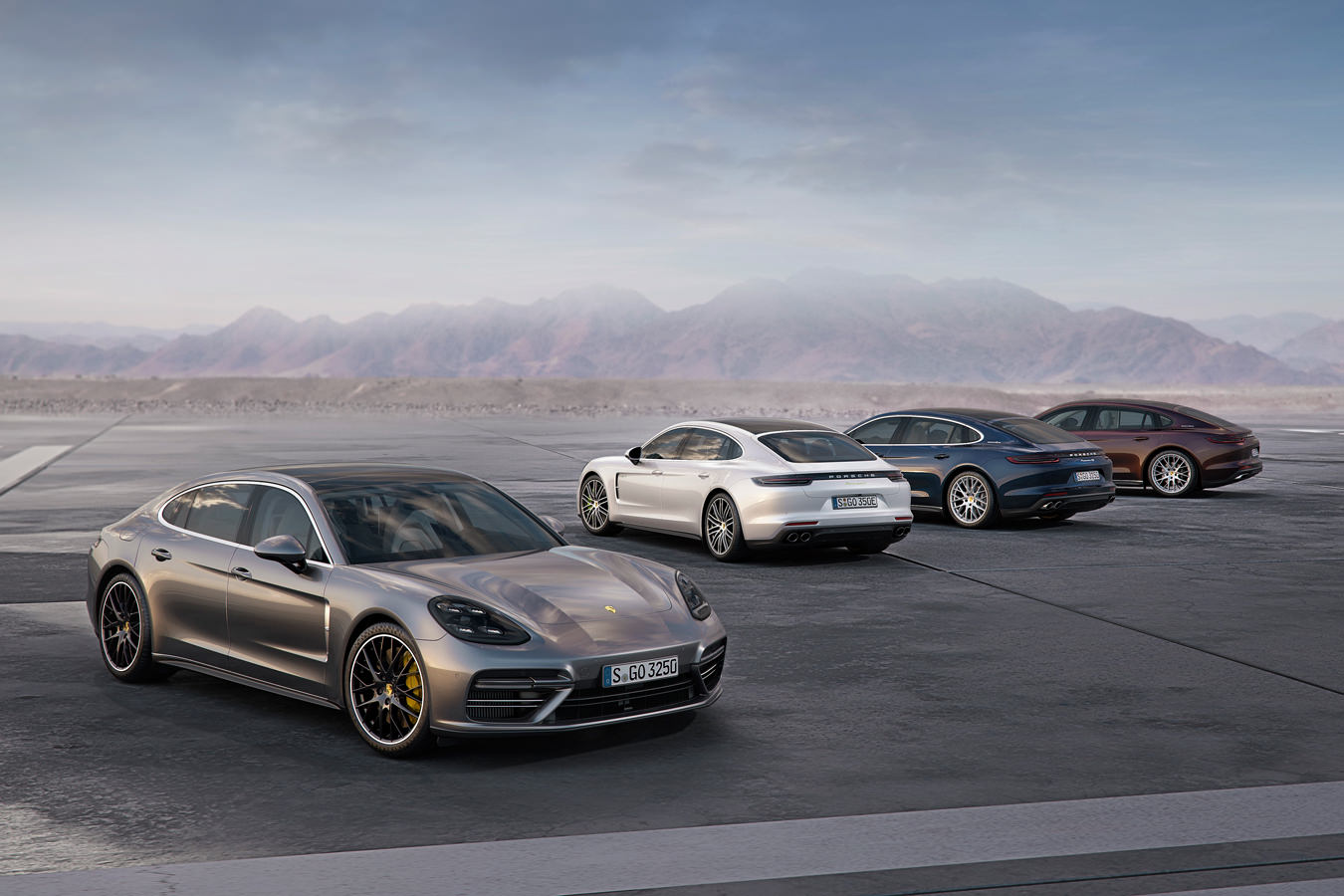 When you’re behind the wheel, the cabin feels like that of a current Cayenne, but lower and more tech obsessed. Much like with a 911, you sit low inside the Panamera, with good forward visibility and a sporty seating position that provides confidence while on the move. Rear visibility is highly compromised by a sloping roofline and thick C pillars. This is where the Panamera’s collection of sensors and cameras prove quite handy, offering a 360-degree view of the car for easy manoeuvring in tight environments. Measuring a hair over five metres long and weighing 1,995 kilograms (1,870 kilograms for the 4S), the Panamera is a large car, which makes its performance all the more impressive.

Having covered some 200 kilometres of everything from city streets filled with heavy traffic to empty winding backroads, the 4S had proven to be a fun and comfortable way to make a run for the hills. Nevertheless, the Turbo lingered in my mind. That night I slept lightly. I thought of 550-horsepower V8s, and dreamed of an unrestricted run on the autobahn.

The next morning, I collected the keys to a lovely silver metallic Panamera Turbo GT on 21-inch Sport Design wheels. For the next few hours, this was my Turbo. The giant wheels had enough tire to let you know you were driving something serious, with 275 sections up front and massive 315 sections in the rear. With huge wheels, bright yellow brake calipers, and blacked-out trim, this Turbo looked decidedly sportier than the 4S I had driven the day before. To further accentuate the go-fast aesthetic, the Turbo features a crowd-pleasing mechanical expanding rear spoiler that many have taken to calling the “Iron Man wing.” With the wing deployed it becomes clear why this is one of the fastest production sedans ever to circle Germany’s infamous Nürburgring racetrack.

Once under way, the first thing you notice about the Panamera Turbo is the noise—the V8 is decidedly more vocal than the V6 powering the 4S, and it gets even louder if you rotate a small knob on the steering wheel to activate Sport Plus mode. In Sport Plus, the Turbo is at its most aggressive. The exhaust is open, the shifts are faster, and the throttle becomes razor sharp. After the noise, the main notable characteristic of the Turbo’s V8 engine is its welcome increase in torque, allowing you a wider power band in which to build speed, especially in higher gears and at lower rpms. Launch Control mode is simply savage, delivering lightning quick acceleration to anyone with two feet and a desire to get off the line in a hurry. The quoted 0 to 100 km/h times are very real and easily achieved, and feel absurd in a car of this size.

With the rear spoiler “Iron Man wing” deployed it becomes clear why this is one of the fastest production sedans ever to circle Germany’s infamous Nürburgring racetrack.

Cutting through winding German backroads, the Panamera Turbo easily transitions from relaxed cruising to more spirited driving. With the optional Sport Chrono Package, the steering wheel is fitted with a Sport Response button, which offers instant access to 20 seconds of maximum performance, ideal for a no-questions-asked overtake or an especially short on-ramp.

The handling experience of the Panamera, especially the Turbo, is characterized by its incredible grip and balance. While the electric steering does not provide a great deal of feedback, it is nicely weighted and the Panamera turns in hard and fast, no doubt aided by those massive tires. Regardless of the speed, or indeed the sometimes ham-fisted nature of my inputs, the all-wheel drive Panamera felt sure footed, easy to control, and unshakably confident.

While Germany’s network of highways is known the world over for its lack of speed limit, the truth is that only certain sections offer unrestricted travel, and only in times of appropriate weather and traffic conditions. Blessed with clear skies and light traffic, I could not conceal my glee as I entered this limit-free wonderland of smooth four-lane tarmac. Setting the Panamera in Sport Plus, I dropped two gears and floored the throttle.

Quickly pulling away from the already fast-moving traffic, the Panamera put on speed in a fantastic fashion. Above 250 km/h and alone in the left lane, the Turbo was composed, comfortable, and seemingly unaffected by the pace. With a careful eye on any vehicle threatening to enter my lane, I pushed harder, eventually finding 290 km/h before being forced to match the flow of traffic on the outskirts of Munich. Despite approaching its quoted top speed of 306 km/h, the Turbo’s pace is unrelenting and it was more than happy to cruise, even at more than double the speed limit of any road in North America.

Still tingling from the nirvana of an unrestricted run on the autobahn, I soon had to turn in the Turbo. By transplanting the sporting soul of a 911 into a big, comfy, tech-laden and fantastically quick sedan, the 2017 Porsche Panamera manages to advance the field, once again establishing itself as a consummate all-around sports sedan.