In 1991, Jaeger-LeCoultre startled the watch world by introducing an edition of its iconic Reverso watch with a complicated mechanical movement. (In watchmaking, a complication is anything other than hours, minutes, and seconds. In this case, it had a power reserve indicator.) This would not be remarkable today, but back then, it seemed almost foolhardy. A decade earlier, Japanese companies had introduced quartz technology to the market, resulting in watches that were cheaper and more accurate than their mechanical counterparts. Quartz quickly eviscerated the largely Swiss mechanical watch industry, and then dominated the market for the next 20 years. The Japanese called it the quartz revolution. The Swiss called it the quartz crisis. In order to compete, Swiss manufacturers shut down their production of mechanical movements (or shut down altogether) and retooled their factories for quartz. So when Jaeger-LeCoultre delivered a mechanical complication at the height of the quartz era and then followed up with the announcement by then-CEO Henry-John Belmont that the company would be reintroducing all of its mechanical complications over the next 10 years, industry observers were taken aback. 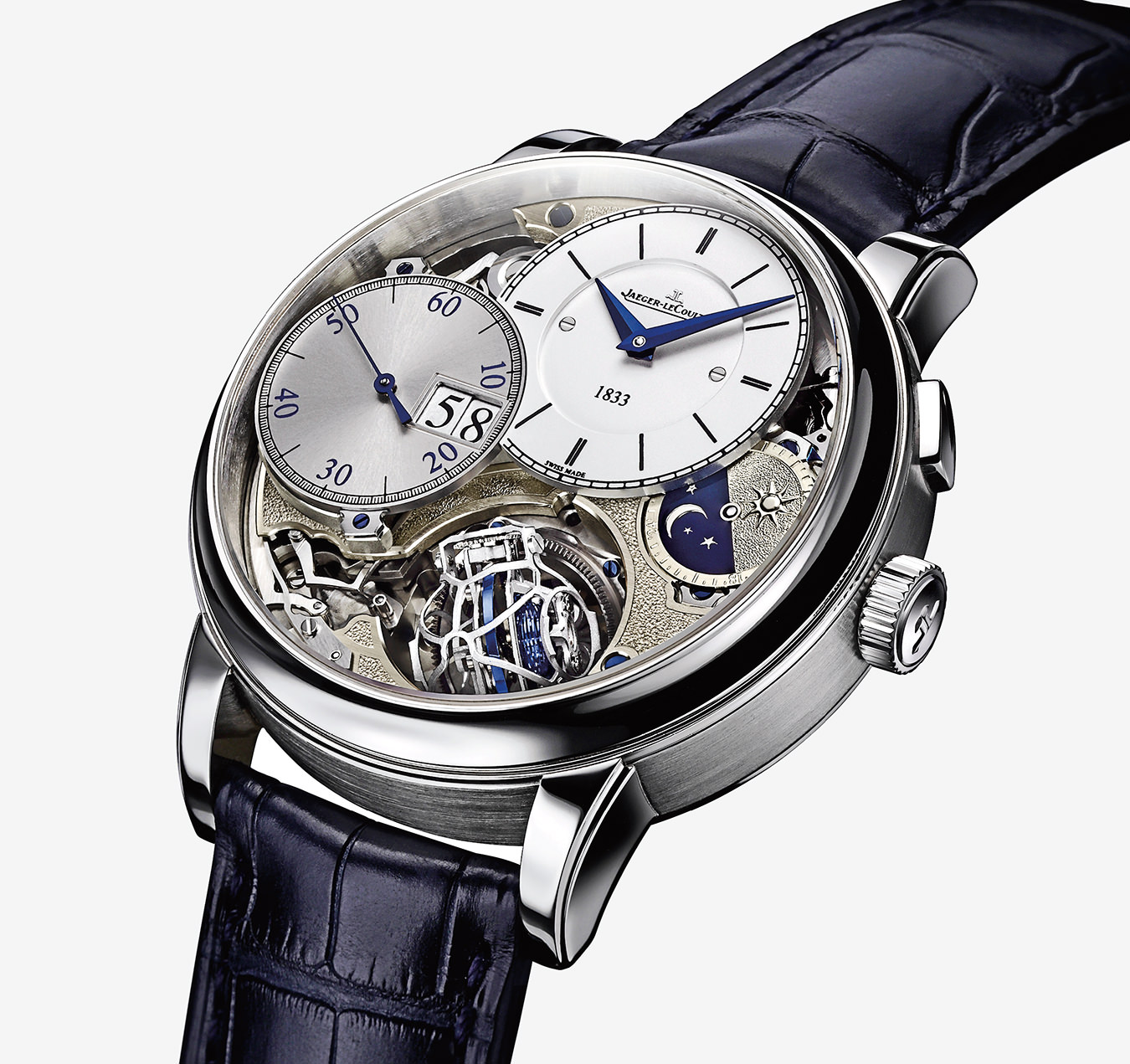 The Master Grande Tradition Gyrotourbillon 3 watch is a double-axis tourbillon with a spherical-shaped cage, spherical balance wheel, and ball-shaped hairspring.

Part of the reason Belmont decided to relaunch Jaeger-LeCoultre as a mechanical brand was because he could. Founded in 1833 in Switzerland’s Vallée de Joux, Jaeger-LeCoultre was a movement maker, specializing in complications: perpetual calendars, minute repeaters, tourbillons. It was a watchmaker’s watchmaker, supplying most of the elite brands with movements and continually inventing new ones. Since its founding, Jaeger-LeCoultre has developed an astounding 1,249 movements, on which it holds 413 patents, a number no other brand has even come close to achieving. With the resurgence of mechanical watchmaking, many of the elite brands have recently developed their own movements, and most have at least one in-house base calibre by now (the foundation on which other complications are built). Cartier, one of the most impressive of today’s mechanical watchmakers, has a collection made up of over 30 manufacture movements. Patek Philippe, considered watchmaking royalty, makes 50 movements. The philosophy behind Jaeger-LeCoultre’s proliferation of calibres is something the company refers to as product integrity. “Each watch is slightly different in design or size or function, and instead of creating the case and design to fit the movement, we make a movement to fit the watch,” says the company’s current marketing and creative director, Stephane Belmont (who happens to be the son of Henry-John Belmont).

Almost as remarkable as the company having created so many calibres is the story of how those calibres were preserved. While most watch companies abandoned their mechanical operations during the quartz era (new technology that everyone thought would replace traditional watches), the watchmakers and technicians at Jaeger-LeCoultre quietly spirited away the company’s mechanical calibres along with the tools and equipment used to make them, in the vain hope of a comeback. “It was a survival instinct,” says Stephane. “They were passionate about what they did. It was their work, and they couldn’t just walk away from it. So when my father joined the company [in 1987], all the tools and equipment that could be used to make mechanical watches were there, and they were still in good working order, being used to create components for other industries, such as writing instruments and dashboard parts,” says Stephane. 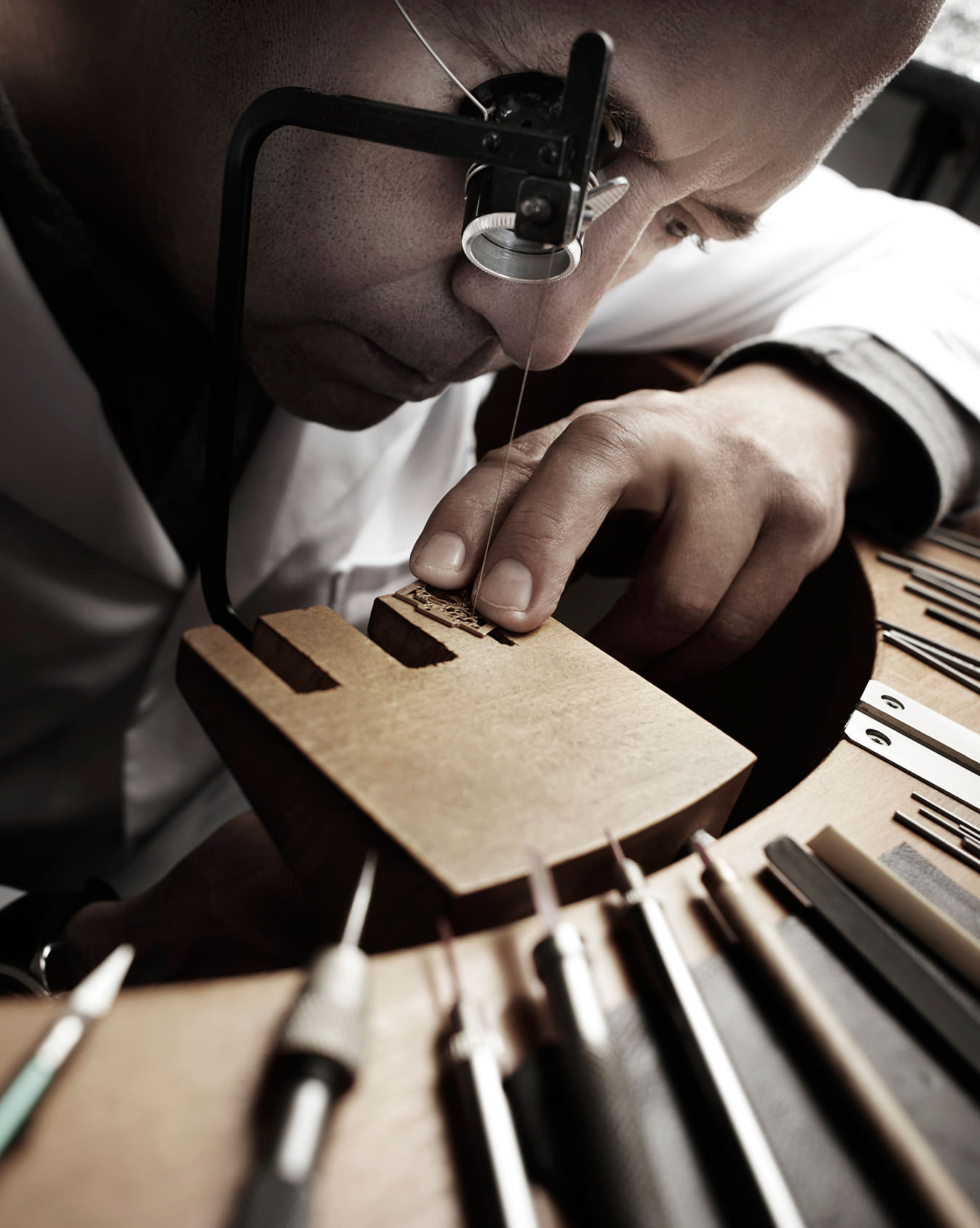 A watchmaker works on a movement.

“The landscape of mechanical watchmaking today would probably have been much different were it not for Jaeger-LeCoultre,” continues Stephane. Most of the elite brands have restored their mechanical watchmaking capabilities, and JLC has increasingly focused on producing calibres for its own watches, including some notable new inventions. The Master Gyrotourbillon series, for example, contains a flying tourbillon escapement with a unique spherical balance spring that appears to move like a gyroscope. It is a first in watchmaking. Last year’s Hybris Mechanica 11 with a minute repeater and flying tourbillon (Calibre 362) is the world’s thinnest automatic minute repeater, at 7.9 mm thick. (It is rare for a repeater/tourbillon complication to measure less than 10 mm thick.) The absence of an upper bridge—it is a flying tourbillon—and the presence of a new flying balance wheel as well as a space-saving peripheral rotor help keep it slim. It has several other impressive details that give it credence among watch enthusiasts, including something called trebuchet hammers. These are engineered with an extra hinge, meaning they chime the gongs using 80 per cent less energy than conventional hammers, and this, in turn, allows for a smaller mainspring barrel, the source of energy in a mechanical watch. The gongs are connected directly to the sapphire crystal, rather than the case side, for a clearer, more amplified sound, and a “silent-time-lapse” reduction system means that, unlike conventional repeaters, there is no gap between the chime of hours and the minutes when there are no quarter hours to chime in between. To the seasoned watch aficionado, details like this elevate a timepiece to holy grail status. 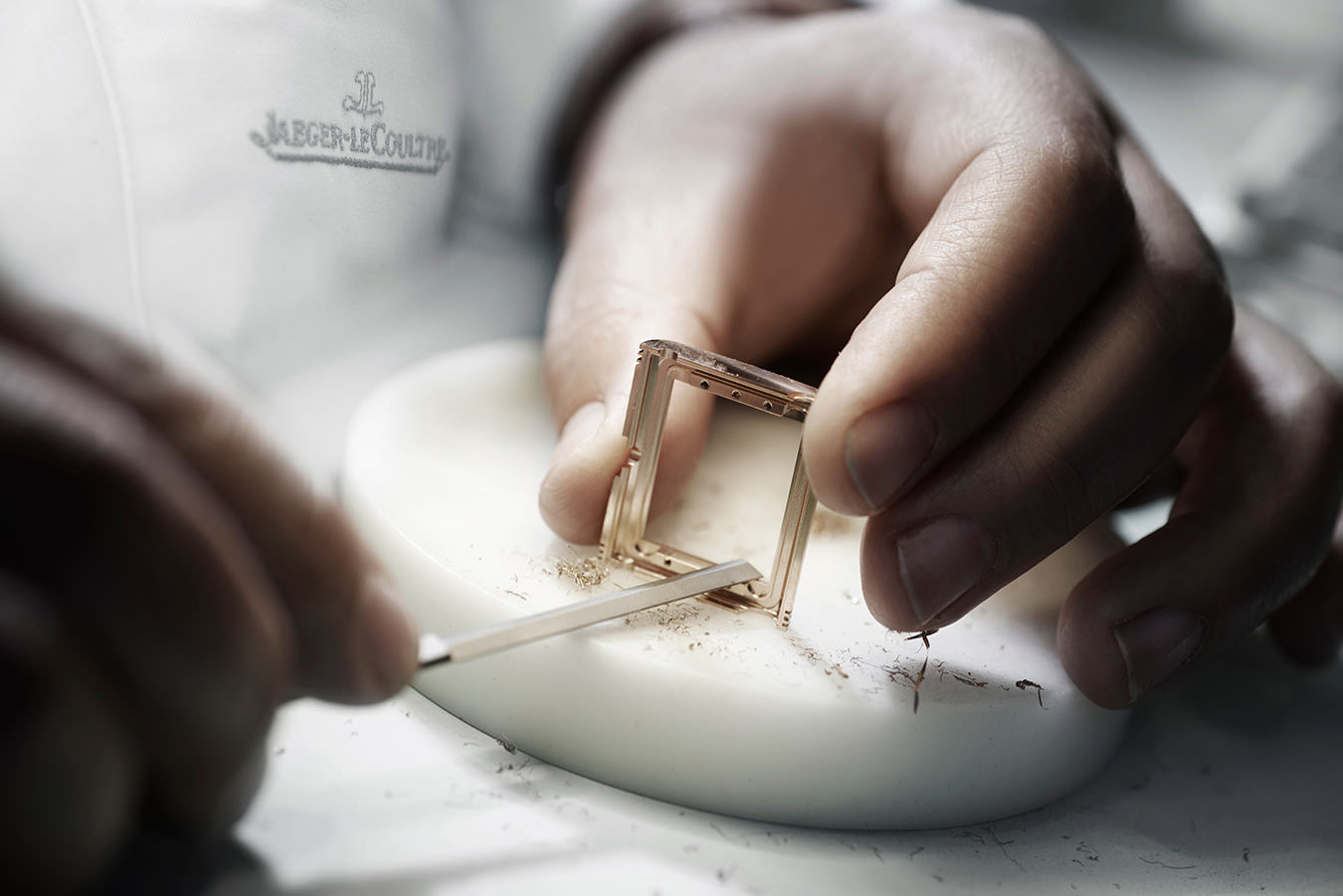 Last fall, Jaeger-LeCoultre introduced its first minute repeater for women, the Rendez-Vous Ivy Minute Repeater (Calibre 942), with a similar but new calibre designed for a 39 mm case. It retains the signature trebuchet hammers and gongs that are connected directly to the sapphire crystal, but as a women’s piece, it is more decorative. The dial is guilloched and enamelled in a bright blue, superimposed with diamond-set ivy leaves from which the numerals seem to grow organically. The diamonds are continued not only to the bezel but also to the lugs, crown, and repeater button.

New this year for men is the Duomètre Sphérotourbillon Moon (Calibre 389). The impressive feature here, aside from the double-axis tourbillon with its cylindrical hairspring, is the über-accurate moon phase. A traditional moon phase complication shows a discrepancy of one day every two-and-a-half years, when the movement must be adjusted by a watchmaker. A more complicated perpetual calendar typically needs adjustment once every 122 years. The Sphérotourbillon Moon will not need adjustment for 3,887 years. The new women’s moon phase, the Rendez-Vous Moon (Calibre 935) has a moon phase accurate to within one day every 972 years. With Jaeger-LeCoultre producing new calibres at the rate of roughly seven per year, there will no doubt be a new calibre by then with a moon phase indicator accurate until the end of time. 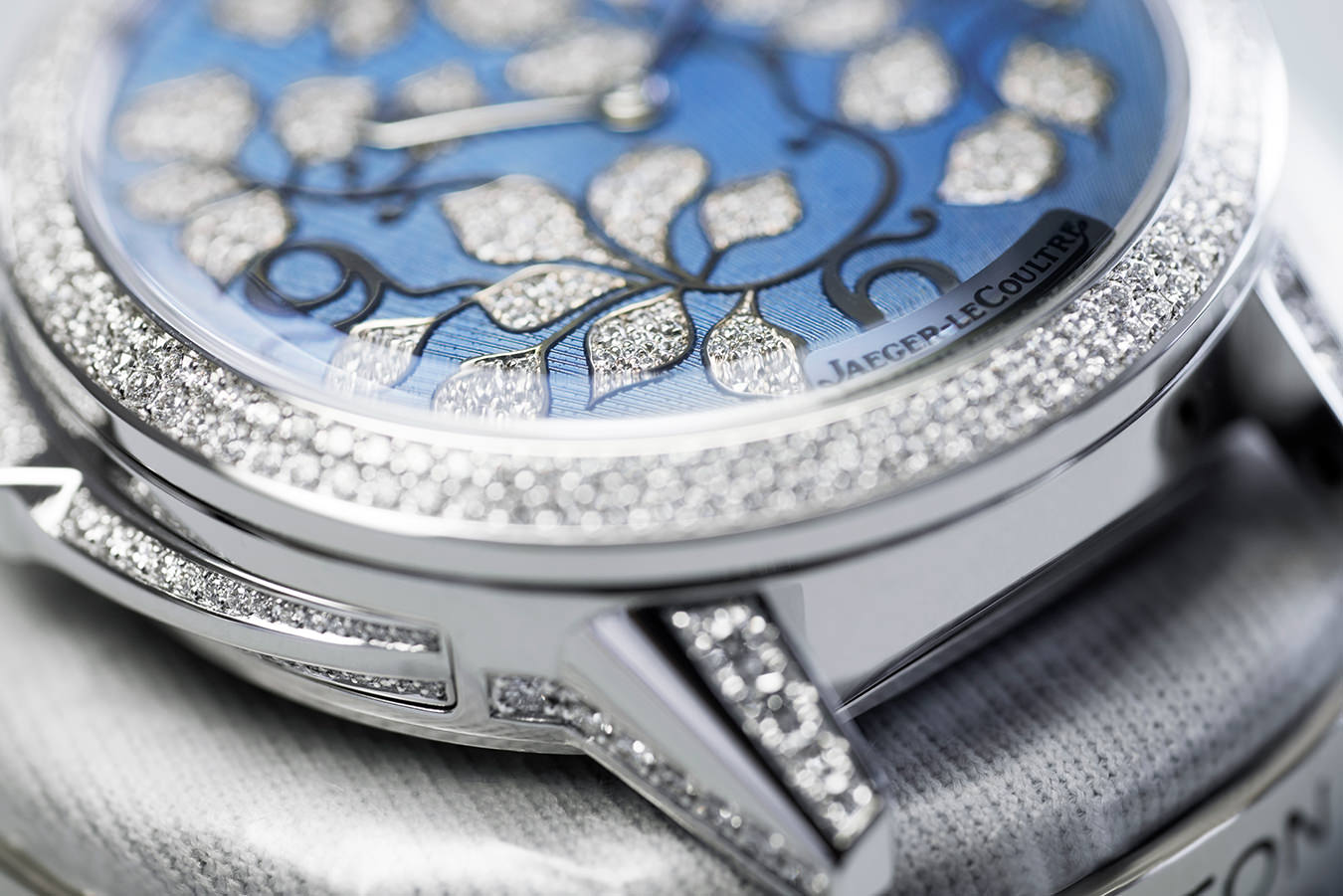